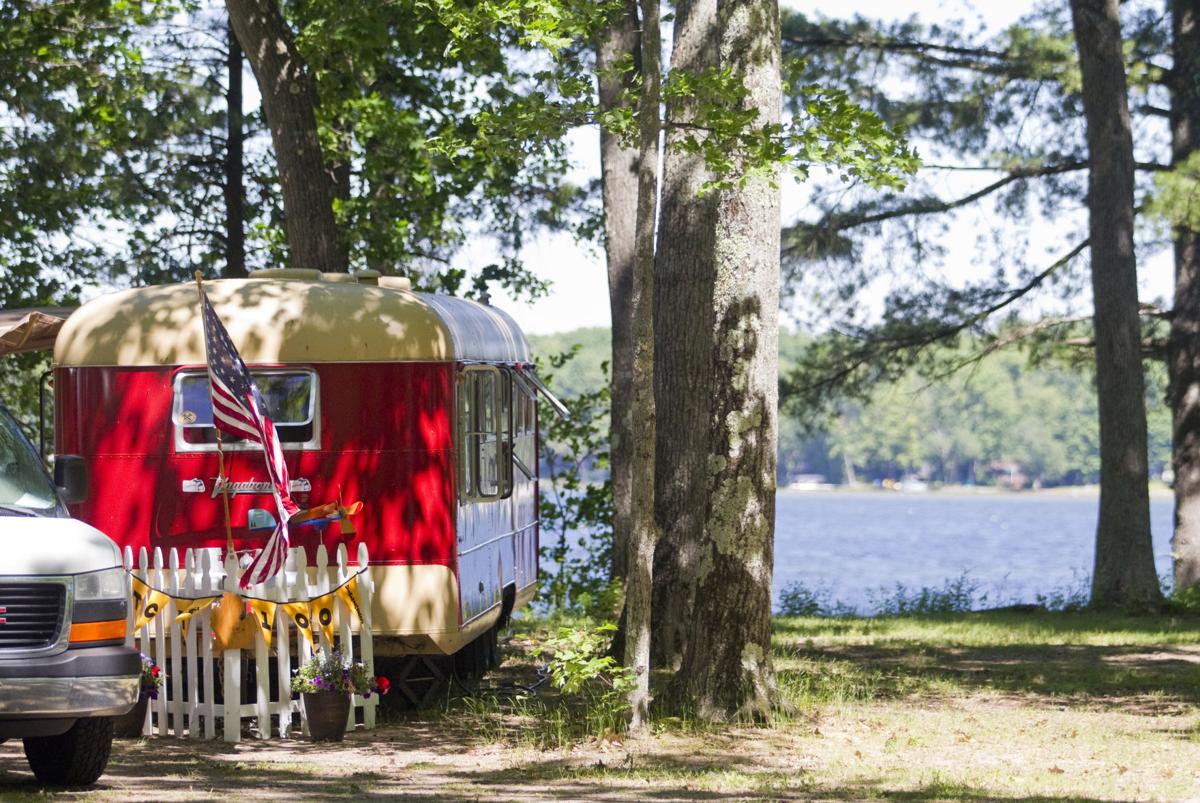 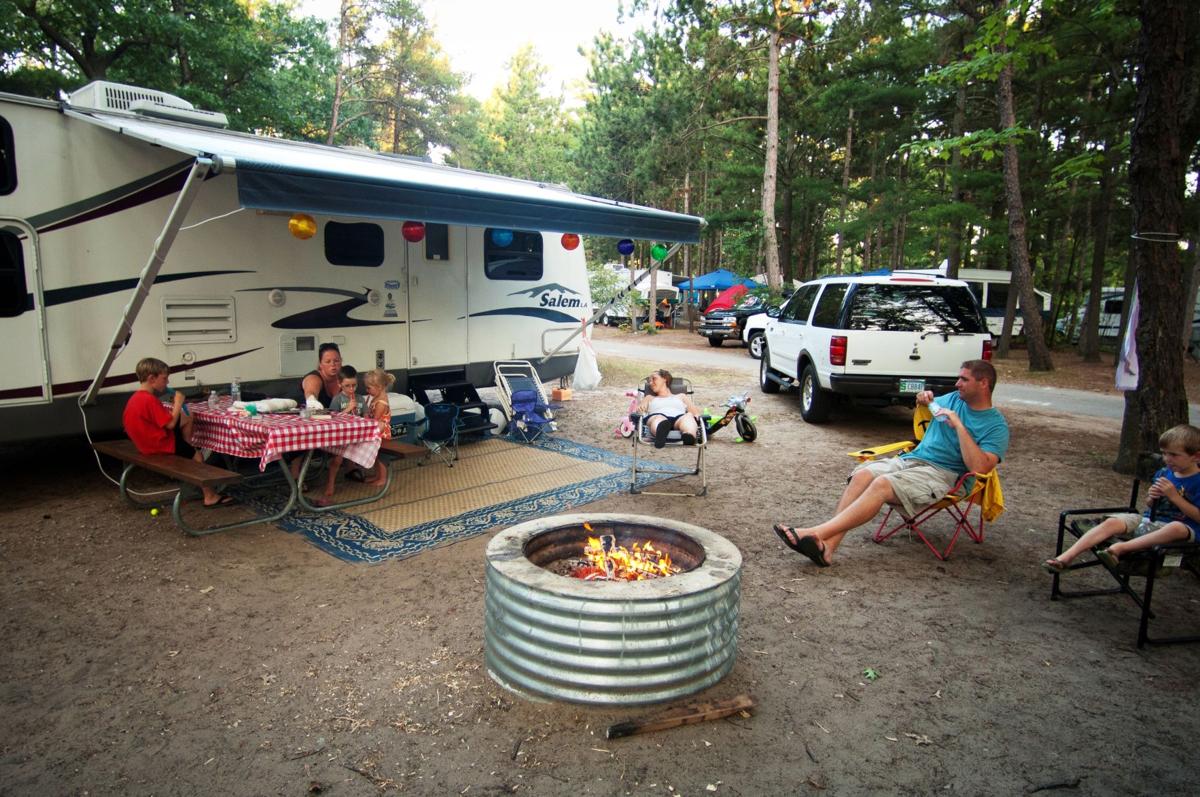 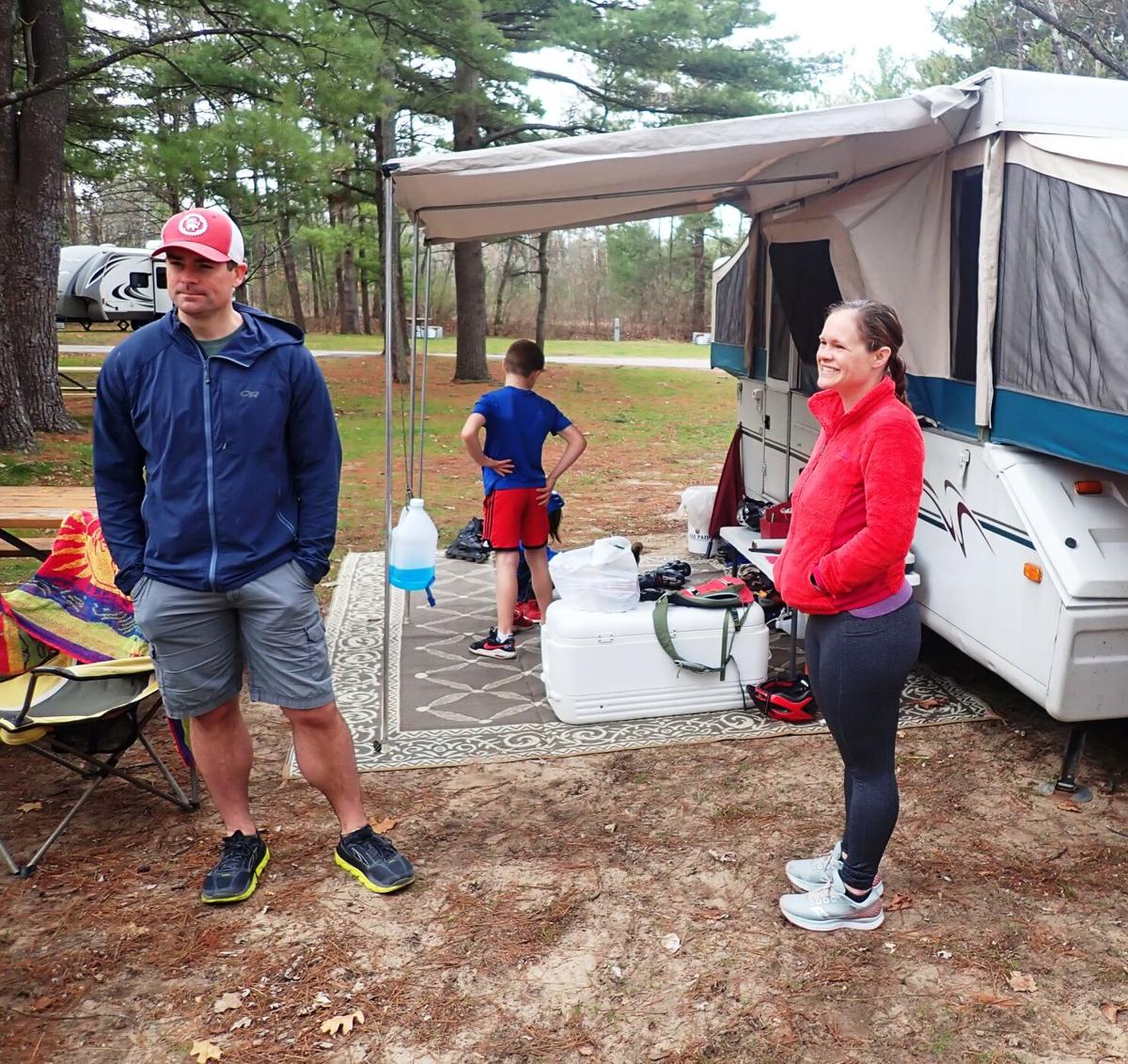 Sam and Melissa Dyste said they hope to camp as many as 40 times this year. Here, the Bellaire family sets camp in early April in the Traverse City State Park. 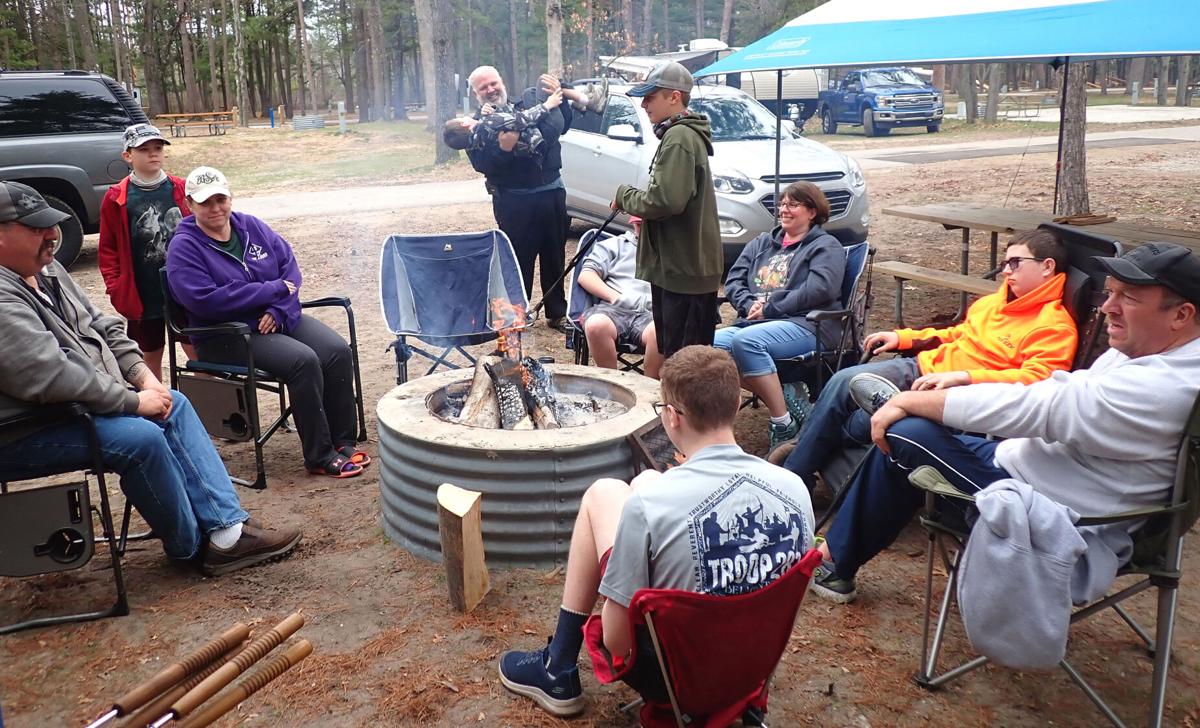 Family and friends of Paul Conner (seated, right), gather around a campfire in the Traverse City State Park in early April. The longtime scout leader from Belmont said they found the spring air refreshing following a long COVID-driven winter. 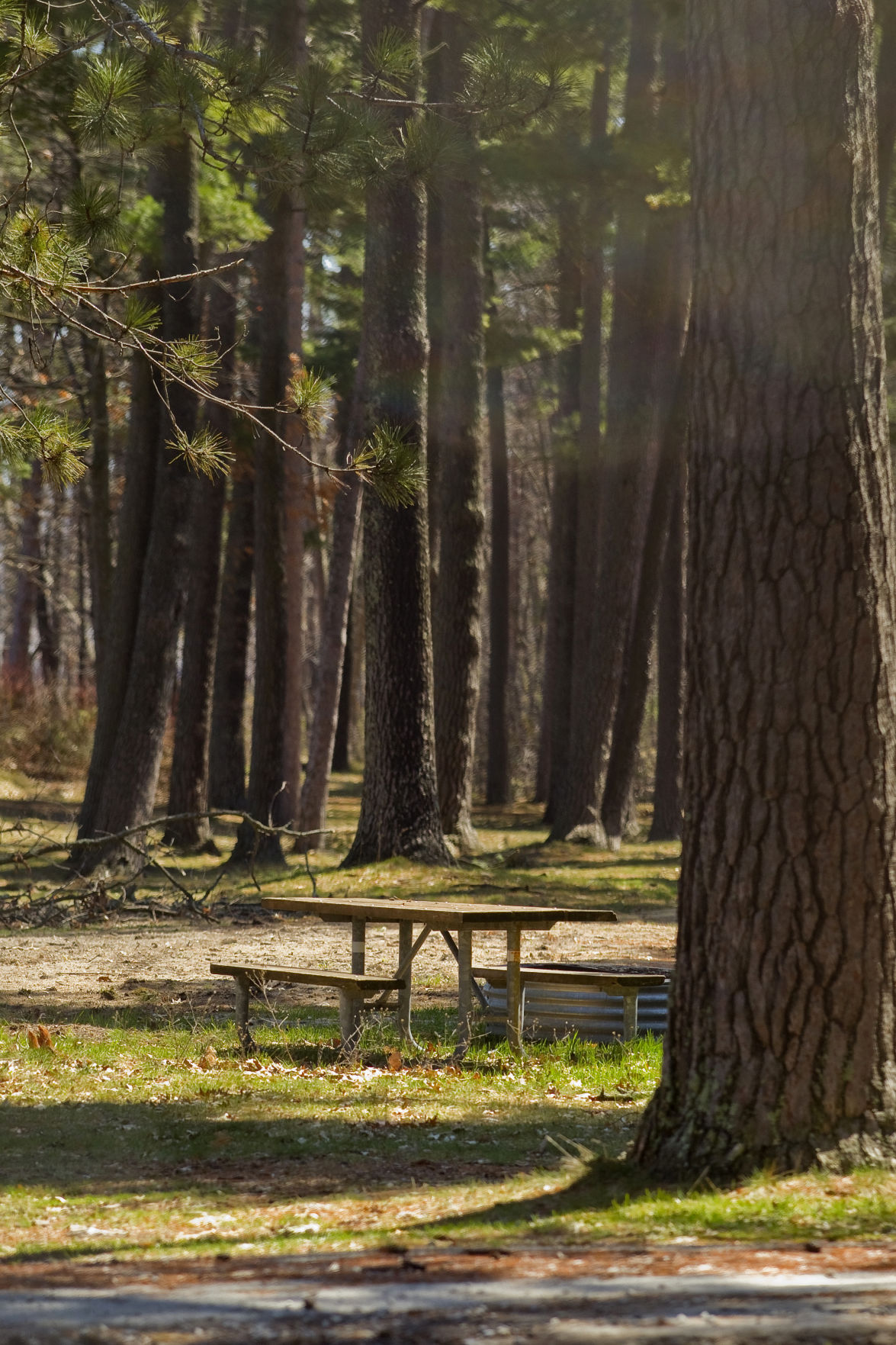 Sam and Melissa Dyste said they hope to camp as many as 40 times this year. Here, the Bellaire family sets camp in early April in the Traverse City State Park.

Family and friends of Paul Conner (seated, right), gather around a campfire in the Traverse City State Park in early April. The longtime scout leader from Belmont said they found the spring air refreshing following a long COVID-driven winter.

The crackle of campfires, the crooning of song birds and the whistle of the wind are once again orchestrating their tuneful seasonal greeting in the Grand Traverse area.

And now, perhaps more than ever, their song of welcome is being heard even louder by those seeking to escape the shackles of COVID-19 pandemic that have held them hostage for so many months.

With the pandemic still a painful blur in their rear view mirror, those seeking refuge on highways like US 131, M-37, M-31, M-115 and more, will become the driving force of this spring and summer’s vacation migration into northwest Michigan’s enticing outdoors. And whether they’re hitting the roads in recreational vehicles they own, or ones they’ll rent, those families will be on a collective quest — to find a relaxed, laid-back atmosphere in a world that has been anything but.

“The last report I (received suggests) there’s going to be about a 30 percent increase in reservations (statewide) for the season — 30 percent increase over average,” said Chris Stark, supervisor of the Interlochen State Park. “I do know that we saw quite a few people from the general area — the five county area around Interlochen — who stayed closer to home (last year), for sure. I would think it will (continue) with the way the pandemic has continued, but we’ll see.”

The Interlochen campgrounds, said Stark, opened on April 30, and unless they are closed again by state mandates, he expects a busy summer.

“Once we opened (last year) we were much above our regular attendance, and we actually set a record with the amount of money we took in our rustic, state forest campgrounds, even though we didn’t open up until later,” said Stark.

“We saw huge increases in people just using trails, and pathways. You know, the outdoors never closed, even though our campgrounds were closed for a period of time. But yeah, where people were able to get outdoors and enjoy themselves, they came out.”

Some families got the jump on their vacations with a spring trip to the Traverse City State Park.

“We’re very excited, it’s about time we’re able to get out,” said Paul Conner of Belmont, a scout leader who was sitting around a campfire with about a dozen family and friends in the popular Traverse City campground. “We do a lot of these trips with the kids – the scouts. You can’t beat this (Traverse City) area, it’s nice and relaxing.”

Conner’s friend, Jason Kelley, said “... we have a lot more of these (camping trips) planned,” while Kelley’s 13-year-old son, Taran, said “... being able to hang out with friends, and being able to get out camping a bit more, is good – we like it.”

Just a few campsites away, Sam and Melissa Dyste of Bellaire were camping with their three sons. Their early-April venture to the Traverse City was the first of about 40 such trips they hope to make this year.

“We love camping, taking advantage of the great parks we have in this area,” said Sam, who is a physician’s assistant. “We camp a lot. This is nice, this is really comfortable. We’ll camp here, and we’ll camp at Timber Ridge Resort, it’s really fun for kids.”

Melissa Dyste, a teachers consultant, said their family seeks out camping ventures most weekends during the summer.

“We’ll go as far as Marquette, and last year we went to Copper Harbor,” she said. “We try to swing through the U.P. at least once a year, sometimes twice. It’s definitely necessary to get out. It makes it feel more normal, it’s something that’s not restrictive.”

Trevor Tkach, president and CEO of Traverse City Tourism, said even though pandemic-related closures last year limited travel, once the bans were lifted, business boomed – at least for some.

“What we observed, here in northern Michigan, is that everything was in higher demand,” said Tkach. “We saw an increased interest because people didn’t have any place else to go in the state. I think a lot of people did want to go camping, but the state campgrounds were closed, so we saw a lot of demand in the private campground space.

“Frankly, (Interlochen) is one of the most popular campgrounds in the state, anyway. I think people were trying to get north because they saw it as a wide open space. So if you were a camper, or if you had any inclination to camp, you might have been compelled to do that because it gave you outdoor space the entire time you were on your vacation.”

Many campers, said Tkach, didn’t travel all that far from their homes to sit around their campfires.

“Michiganders like to travel inside of Michigan,” said Tkach. “I think a lot of Traverse City people stay in the Traverse City area. It’s a beautiful place, so why would you go anywhere else? A lot of people stick close to home (and this) reinforces the demand for camping, not only because people are coming from outside the area, but people right here are interested in that opportunity, as well. Why go anywhere else? Stay right here.

“A lot of Michiganders head up to the Traverse City area, every year. It’s a known destination for the people in the state and they know they can come up here and it’s more rural and it’s more spread out – it’s safer.

“So whether it’s camping, or staying at a resort or hotel, I’d say we did a darn good job of maintaining a safe environment, no matter what sort of lodging they chose,” he said. “And I think that’s due to the management of our hospitality industry and camping was one of the many benefactors.”

Still, Tkach cautioned travelers to maintain safety protocols advised by health and governmental officials until the we’re officially out of the woods with COVID-19.

“We’re working hard to help keep things safe. I hope travelers are understanding that it’s not a free-for-all. We want to make sure people are safe while they’re on vacation and we have to keep our communities safe.”

Kevin Brinkerhoff, owner of TCRV that specializes in new and used RVs, travel trailers, fifth wheels, pop-up campers and more, said he expects his rental business to be busy this season, again, as more and more people look to solitude in the campgrounds.

“The rental business is pretty solid,” said Brinkerhoff. “It’s always been pretty solid for us. We rent by the week, or the weekend, though the most has probably been about a month. We show ‘em how everything works on it, and how to hook it up, and unhook it. We give them the support they need after they take it somewhere. We’re always on stand-by, 24 hours a day, just to give support to people who rent from us.”

Not only does TCRV have a show yard of recreational vehicles for sale – all sizes and makes – they also have 20 units to rent out, too.