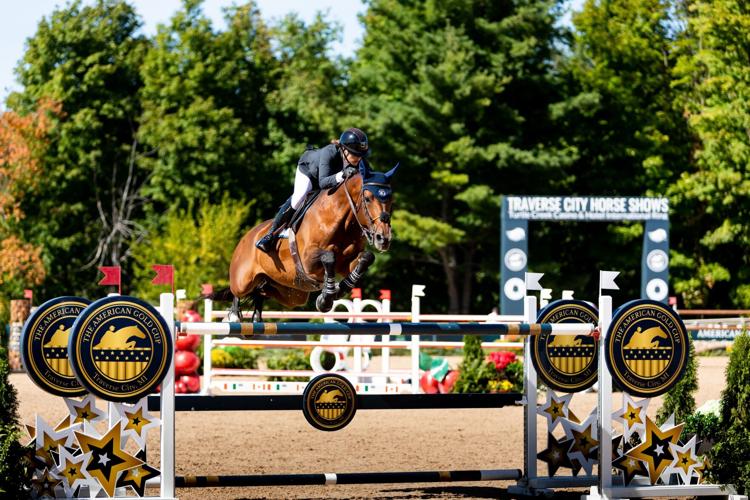 Brianne Goutal-Marteau and Viva Columbia jump a fence on their way to winning the 2021 American Gold Cup at Traverse City Horse Shows. 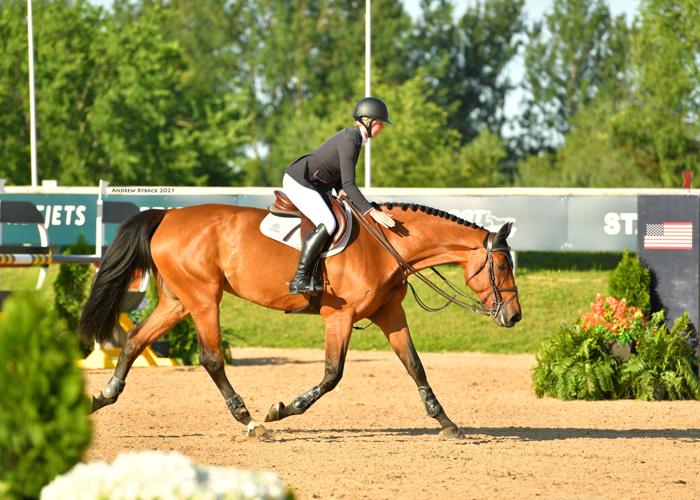 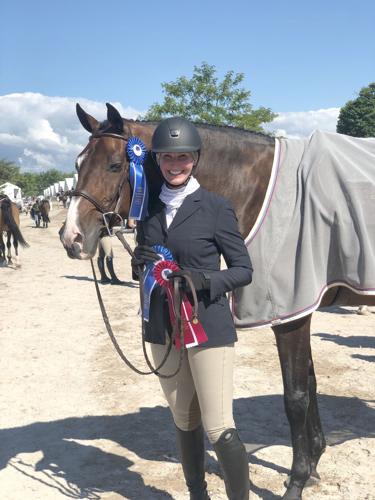 Karen Robinson shows off her ribbons with horse Casiro after taking a weekend championship in the Adult Hunter Older Division at the 2020 Traverse City Horse Shows. 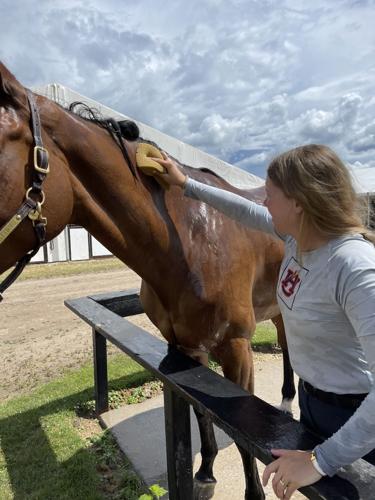 Paige Matthies washes Qutaira at the 2021 Horse Shows by the Bay.

Brianne Goutal-Marteau and Viva Columbia jump a fence on their way to winning the 2021 American Gold Cup at Traverse City Horse Shows.

Karen Robinson shows off her ribbons with horse Casiro after taking a weekend championship in the Adult Hunter Older Division at the 2020 Traverse City Horse Shows.

Paige Matthies washes Qutaira at the 2021 Horse Shows by the Bay.

But while the annual summer-plus series at Flintfields Horse Park was compelled to bar spectators as a coronavirus precaution beginning in 2020, the pandemic forced many other horse shows around the country to cancel or relocate — bringing a slew of new competitors and events to Traverse City.

This year’s Traverse City Horse Shows — June 8 to Sept. 18 — welcomes back spectators for its most robust season yet, said Morrissey, of host Morrissey Management Group. It features 13 weeks of international and national-level hunter, jumper and equitation competition for ranking points and a whopping $7 million in prize money.

The series, which pumps $120 million into the local tourism economy, according to a 2021 Sport Management Research Institute report, used its two years away from spectators to both improve its facilities and offerings.

Fans will find an enhanced experience since 2019, from an added week of competition to shaded seating at all seven show rings (and six schooling rings), viewing pavilions with food and beverages, a two-story hospitality tent from which to watch the main hunter ring or the grand prix ring, bigger state-of-the art video boards, live DJ entertainment between rounds to amp up the energy, and permanent restrooms.

“The Gold Cup Grand Prix is $405,000 — an odd number based off the Swiss Exchange — the largest grand prix ever in Traverse City,” Morrissey said.

But he expects a new North American team event to be the star of the series. Major League Show Jumping, a 5-star-level competition among franchise teams with names like Road Runners, Northern Lights, Eye Candy and Sky Coast Spies, makes a tour stop at Flintfields during week five of the series’ Great Lakes Equestrian Festival, Aug. 3 to 7.

“Being included on this tour greatly assisted in bringing in new people,” Morrissey said. “The team concept is fun, it is very easy to follow because the scoreboard is constantly updated, it’s only an hour and a half, so it’s not that long, unlike the Grand Prix.”

That makes it ideal for spectators with limited time or kids with shorter attention spans, he said, adding, “It’s kind of made for spectators and TV.”

Challenging competition from some of the world’s best riders is just one reason Traverse City Horse Shows has grown into a top North American equestrian destination since its start in 2015.

“Everybody that I talk to that comes here loves it,” said Paige Matthies, a 21-year-old Auburn University junior and former equestrian team member from Lake Leelanau. “It’s a great show and an amazing place. A lot of shows are in the middle of nowhere. Here you can leave the horse show at the end of the day and not be bored.”

Matthies, who trains at Imperial Show Stables based in Wellington, Florida, will be back in the jumper ring at Flintfields this summer with horses Qutaira and Callmeback Pon Pons.

“I truly believe that even if the horse show wasn’t in my ‘hometown’ I would come to it,” she said. “They have a lot of rings, there’s a lot of space, you can take your horse on grass.”

Trainer Heather Irvine has been coming to Traverse City for horse shows since one of its earliest, Horse Shows by the Bay, started at Chums Corner. Now she and clients of her Hillside Farm operated out of Bloomfield Open Hunt in Bloomfield Hills — home of many top horse-and-rider pairs — make Traverse City Horse Shows their seasonal base.

“We bring our horses here and stay the summer,” said Irvine, who six years ago bought a second home in nearby Kewadin.

Client Karen Robinson of Birmingham has only been showing since 2016 but was so enamored with the series and its surroundings that she rented and then bought homes for the season in nearby Elk Rapids.

Recently she sold that home and built a 16-stall barn and two-bedroom garage apartment just a mile or so from Flintfields.

Now she reserves eight or nine stalls for Hillside clients and rents the others to outside trainers from as far away as California, many of whom are visiting Traverse City Horse Shows for the first time.

“I go because I love horses but for me it’s also beautiful,” said Robinson, a business development director who saves up her vacation time to take in the summer. “Traverse City by itself sells itself. And then there’s the show. When I started it was six weeks and, since, they brought in so much more, these championships.”

After breaking her humerus in a riding accident and taking last season off, Robinson will be back in the saddle — and the Flintfields hunter ring — this summer with her horse, Casiro.

“I just got a jumper and will attempt to show him, too, if I’m not chicken,” she said. “But I’ll be wearing an air vest.”

Admission to Traverse City Horse Shows is free but tickets for main events are $15 for adults and $10 for students and seniors, available online at traversecityhorseshows.com. Proceeds will go to a different local charity each week.