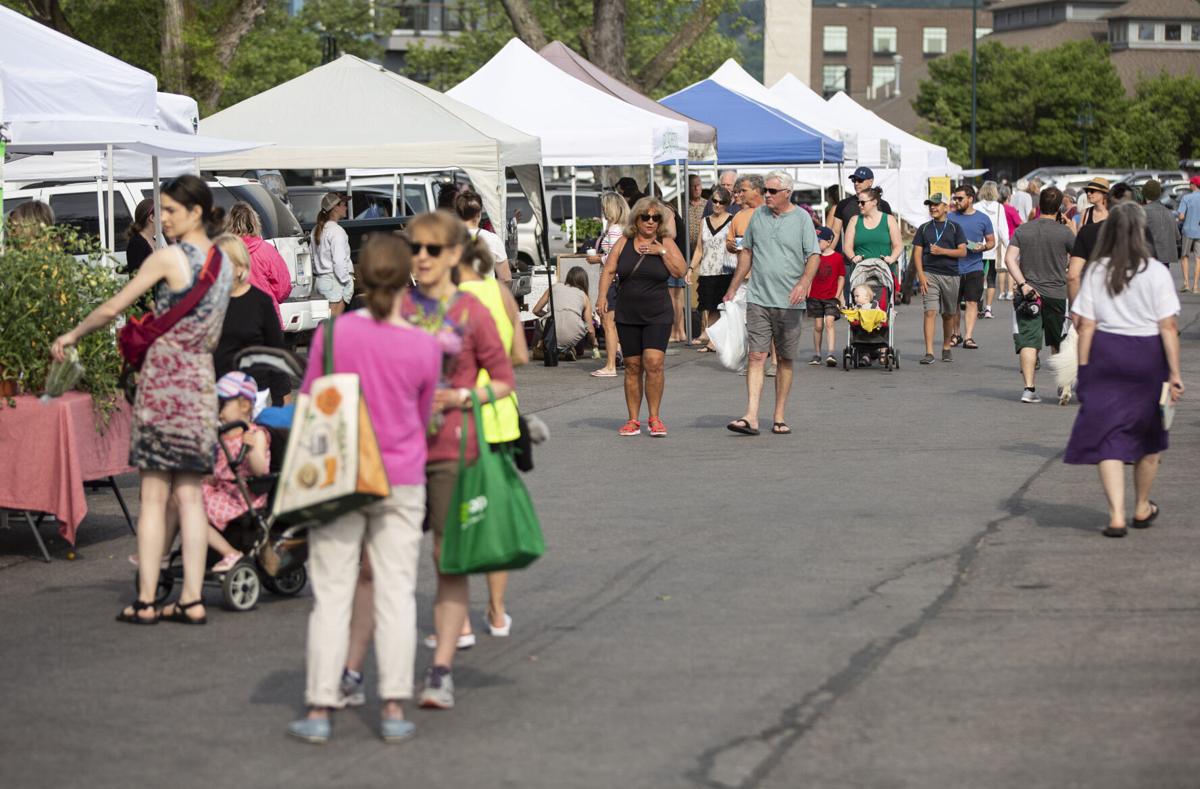 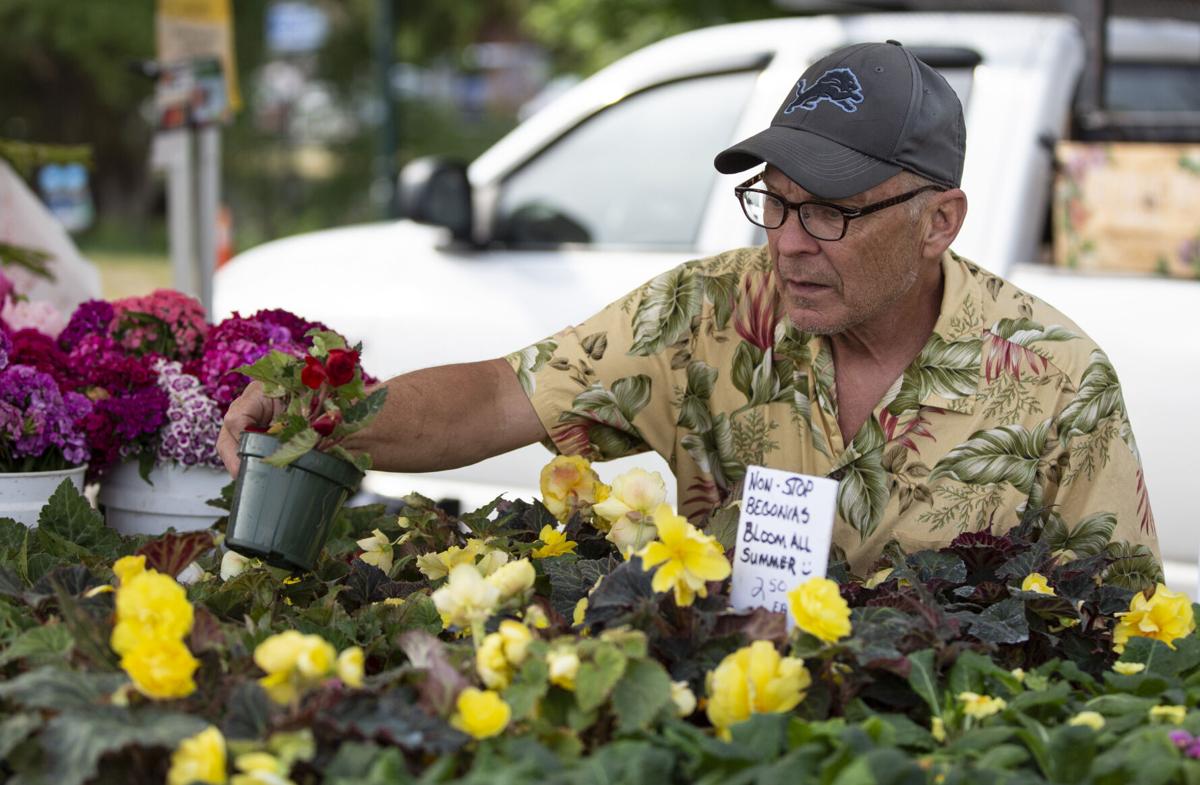 Alan Jones arranges flowers at his stand at the Sara Hardy Farmers Market in Traverse City. 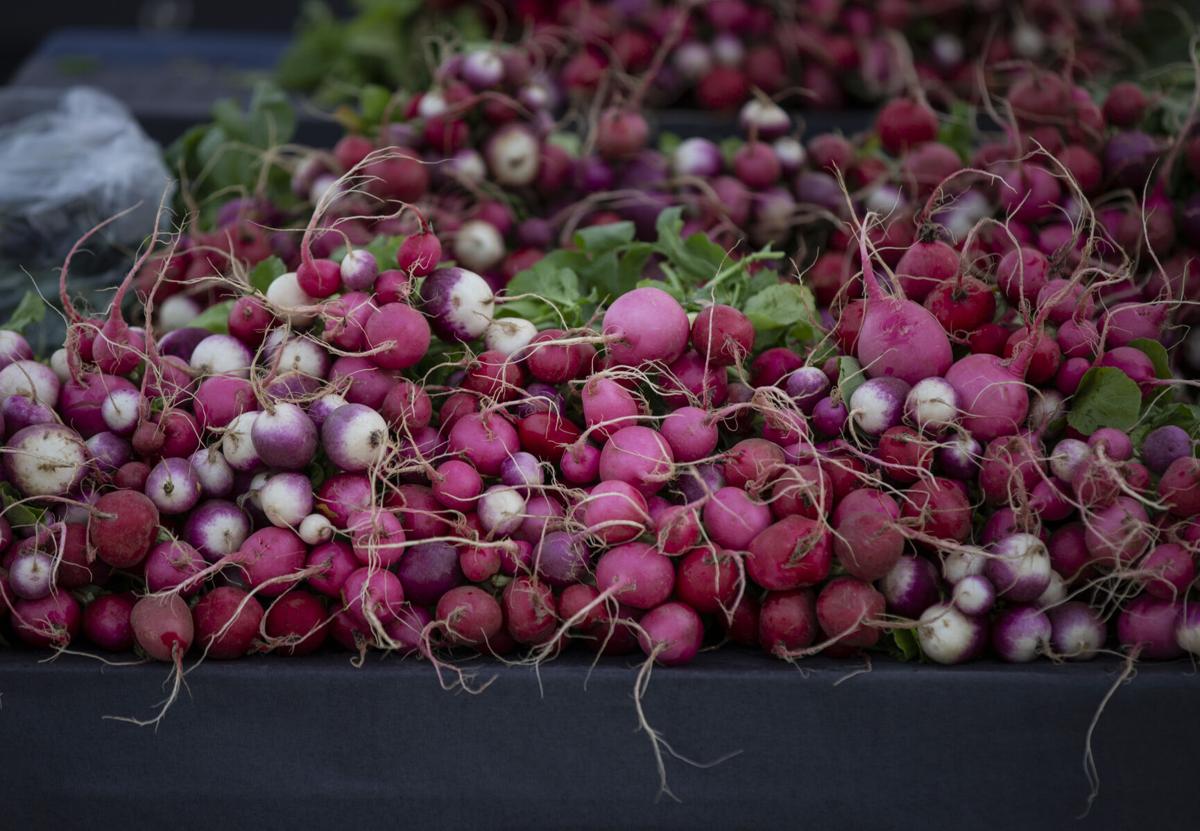 Radishes are displayed for sale at the Sara Hardy Farmers Market in Traverse City. 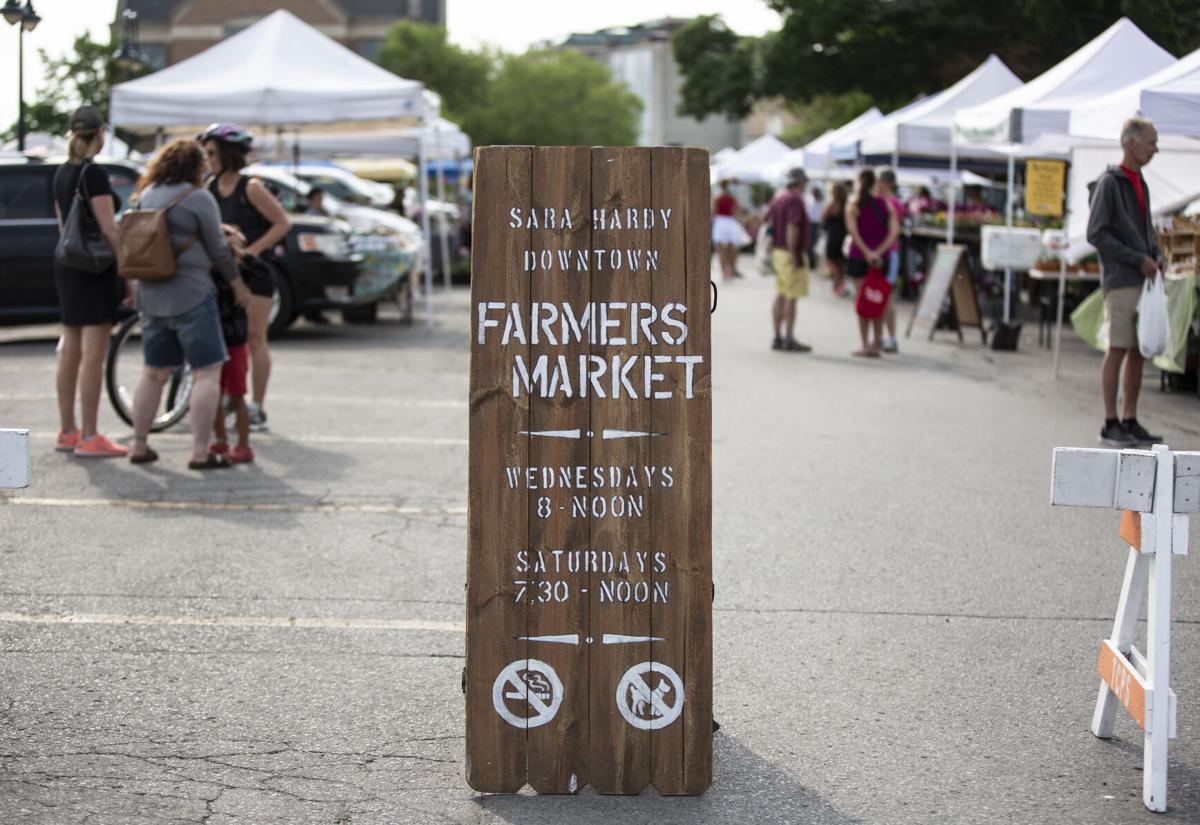 A sign shows the hours of the Sara Hardy Farmers Market in Traverse City. 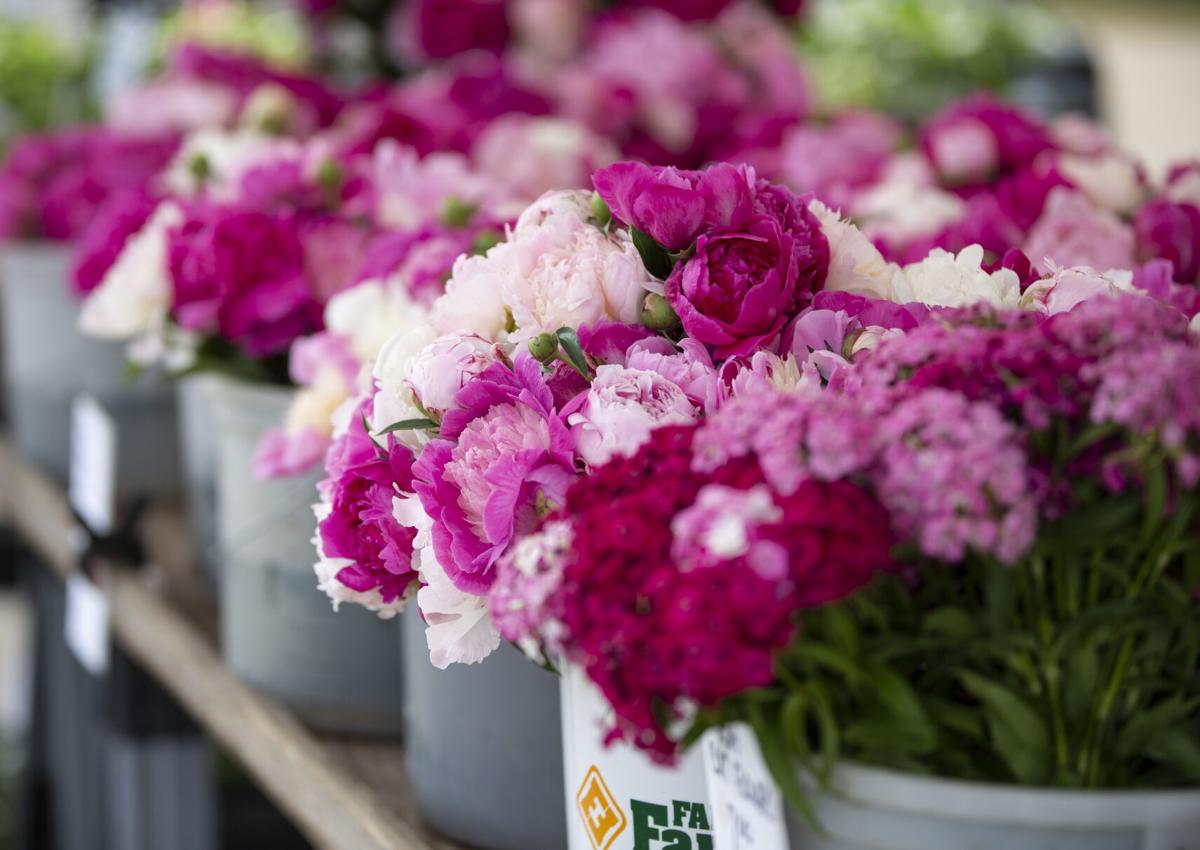 Left, flowers are displayed for sale at the Sara Hardy Farmers Market in Traverse City. Right, Alan Jones arranges flowers at his stand at the Farmers Market.

Alan Jones arranges flowers at his stand at the Sara Hardy Farmers Market in Traverse City.

Radishes are displayed for sale at the Sara Hardy Farmers Market in Traverse City.

A sign shows the hours of the Sara Hardy Farmers Market in Traverse City.

Left, flowers are displayed for sale at the Sara Hardy Farmers Market in Traverse City. Right, Alan Jones arranges flowers at his stand at the Farmers Market.

Have you ever wondered how ginger and turmeric started to show up at the farmers’ markets? How do farmers choose to grow the produce or sell the products they do? I asked a few farmers who sell at the Sara Hardy Farmers Market in Traverse City this question.

The growers at these markets typically have small-scale farms, and surprisingly, many sell most of what they grow there. The market is sensitive: not only do farmers have mother nature to contend with, (a killing frost may leave them nothing to sell that week,) they have the whims of customers to contend with as well.

Decisions on what to grow are made well in advance of sales or trends. Some crops, such as garlic, must be planted almost a year ahead of the selling season,and seeds for new crops are often purchased in the winter months. It can be quite a challenge for the farmer.

He and wife Fran grow quite a variety of produce throughout the year on their small farm and have a loyal customer base. When asked if they follow any trends to make their choices, Alan says “...we get (some) input from chefs, and restaurants as well … but mostly it’s chatting with our customers that drives things.”

Take the fingerling potatoes they started growing years ago at the suggestion of a customer.

“I had never heard of them … and now every year I plant more and more.”

Watch for a new squash this fall, recommended by another patron.

Fran (the crop manager of the two) and Alan take time after each season to reflect on their year, looking at “what sold like hotcakes, what we could hardly give away.” In their 25 plus years of selling, they have plenty of success stories and a few pivots. Fran loves bunching onions which they brought for years to the market, but with all the labor involved, they were selling them at a loss. No more bunching onions.

“Another one was hot peppers … we found they are like motorcycles; people either go nuts over them or you can’t give them away.”

The whims of the customers can take its toll.

Russell Noel Weeks of La Casa Verde Produce, observed that “Some weeks we’ll sell 50 bunches of kale, other weeks it’ll be three bunches of kale; you never know which it’s going to be, so I always try to bring a surplus to market because I don’t want to miss an opportunity to make a sale.”

He goes on to say, “I often joke when we do sell more of a crop than usual that it must have been featured in the New York Times food section or in the last week’s episode of the ‘Martha Stewart Cooking’ show.”

Russell grows between 20 – 30 different crops in a year in Leelanau County and can be found at the market often wearing a dapper vest and a gentle smile. 95 percent of what he grows is sold directly to the consumer, and he notes that in the nine years he has been selling, there has come to be more acceptance of the pricing, and a demand for local and organic food.

Nic Theisen of Loma Farm and Farm Club, is a welcome fixture at the Traverse City farmers’ market with his beautiful displays. While he now has a year-round outlet at Farm Club off South Lake Leelanau Drive, he will continue to be at the farm market as well.

He shared his thoughts on how he decides what to grow for the market. Rather than follow trends, he says “what I like to eat is what I grow.” He admits this doesn’t always work out; though he and wife Allison love chicory, they have concluded “it’s hard to sell.” But he does grow what interests him and likes to educate the public on what they can do with a particular vegetable or product that may be unfamiliar to them.

Nic is a proponent of CSA (community supported agriculture) and provides the members a pamphlet he types(on a typewriter!)with information and recipes as part of their shares. He has been experimenting with heritage varieties of corn, not the sweet corn common to our markets, but corn that can be milled into polenta or masa flour. Masa is an ingredient familiar to many for making tamales, but he will bake it into a delicious bread.

Farm Club has been a good piece of the education process as well. Customers can come to the farm setting, sit at tables overlooking the fields, and eat from a vegetable forward menu. The preparations often walk the fine line between clever and simple, and they beautifully showcase what is in season. Nic, the bread baker, has perfected a seedy loaf and gorgeous country loaf with organic whole wheat and white flours. He sees a whole new world of grains that Michigan farmers will grow and hopes they can be milled locally soon.

Not all sellers at the market grow their crops. Take, for example, Great Lakes Treats, whose booth offers “wild foraged fare, focused on mushrooms.” Owners Jill and Aaron Grenchik are licensed by the Michigan Department of Agriculture to sell mushrooms they find on foraging adventures, so their crop decisions are a matter of spending time in the woods.

They are allowed to sell from a list of 20 varieties of mushrooms and while they hope for good hauls on popular mushrooms such as morels, mother nature plays a big hand.

“We did not find black trumpets last summer but a ton the summer before. It is different from year to year because the mushrooms have a mycorrhizal (symbiotic) relationship with the trees — their (the mushrooms’) appearance is more cyclical.”

Much of what they sell is not only for culinary purposes but for medicinal use, and the pandemic has renewed an interest in mushrooms.

“The chaga mushroom is the king … for its immune boosting properties, and usually (made into) a tea…”

As for the taste, Jill says “It is like green tea meets coffee.” They have had success finding most of the mushrooms that they are certified to sell, except for the elusive Michigan truffle mushroom. She hopes they can find some this year. Her favorites? The lobster mushroom and lion’s mane.

Tyler Troszak of Northern Growin’ operates the farm in Kalkaska with his two brothers, Cameron and Seth. At the market, they are cheerful advocates for their produce: tasty snap peas and radishes in spring; zucchini, baby cabbage, and beans later in the summer. They extend the growing season by using “tunnels,” or hoop houses, which also allows them to cultivate crops that don’t usually grow in their cooler microclimate.

“We grew okra last year and sold out, so we planted twice as much for this year.”

Ginger and turmeric were also added to the roster of products.

Tyler spent part of the winter in Costa Rica this year at a coffee plantation and developed a relationship with the farmer. The farmer was able to get an export license and Northern Growin’ hopes to be roasting the beans and selling them at the market this year. This winter’s adventure might include a stint at a cacao farm.

Next time you are at the market, engage with the farmers you meet, and ask about the produce you would like to buy but aren’t seeing that day. You may learn a little more about what’s in season (don’t ask for asparagus in August) and what your farmer just might try to grow for you next year.

Loma Farms Polenta and Veg, as told to Rose Hollander

Nic Theisen was in the midst of spring planting when I asked if he could share a recipe for this story. He sent this recipe in narrative form, which I love!

“…we cook our polenta at a 5:1 ratio (water: polenta). Bring water to boil, add some salt. Slowly add polenta whisking constantly. Lower heat to simmer and stir often for 45 minutes to an hour or until you like the consistency. If you would like a richer polenta, you could sub some of the water for milk or veggie or chicken stock.

In July we would be topping our polenta with sauteed summer veggies. At that time we would still be very excited about the first zucchinis of the season and basil & fresh garlic. Sauté the coins of baby zucchini in olive oil until browned on both sides, add chopped fresh garlic, and continue cooking until garlic shows the slightest browning. Turn off heat; stir in chopped basil. Top bowls of polenta with veggies; add a bit of pecorino or Parmesan (cheese,) cracked pepper and chunky salt.”