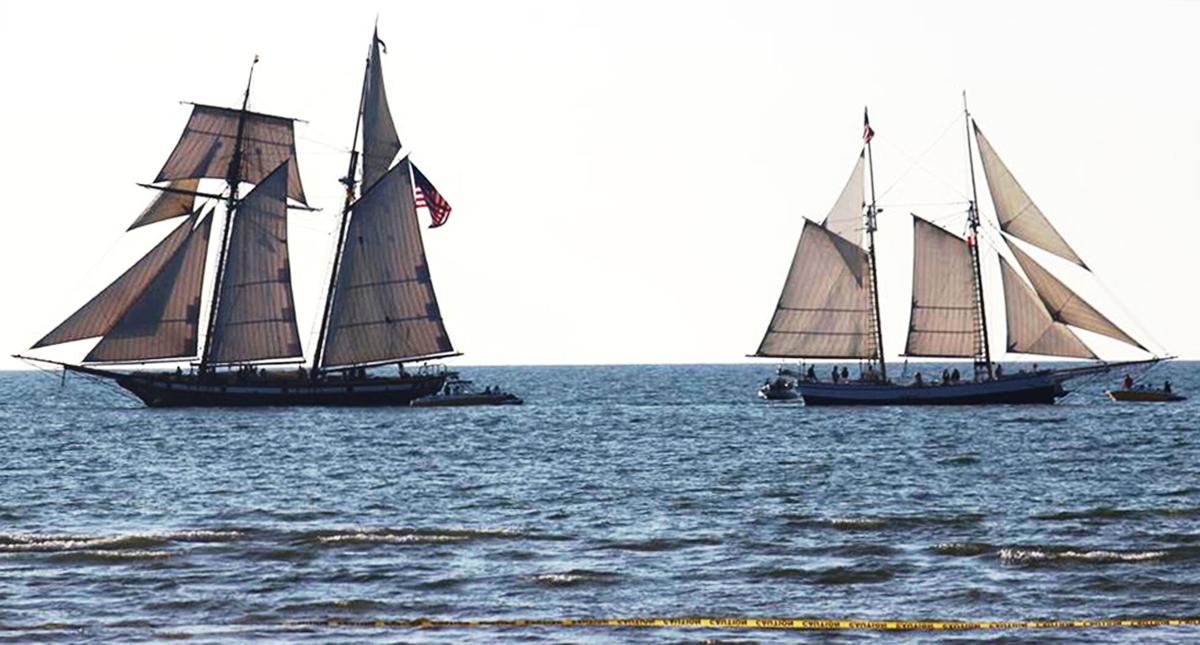 In spring, 2020, these two tall ships passed on another on West Grand Traverse Bay. 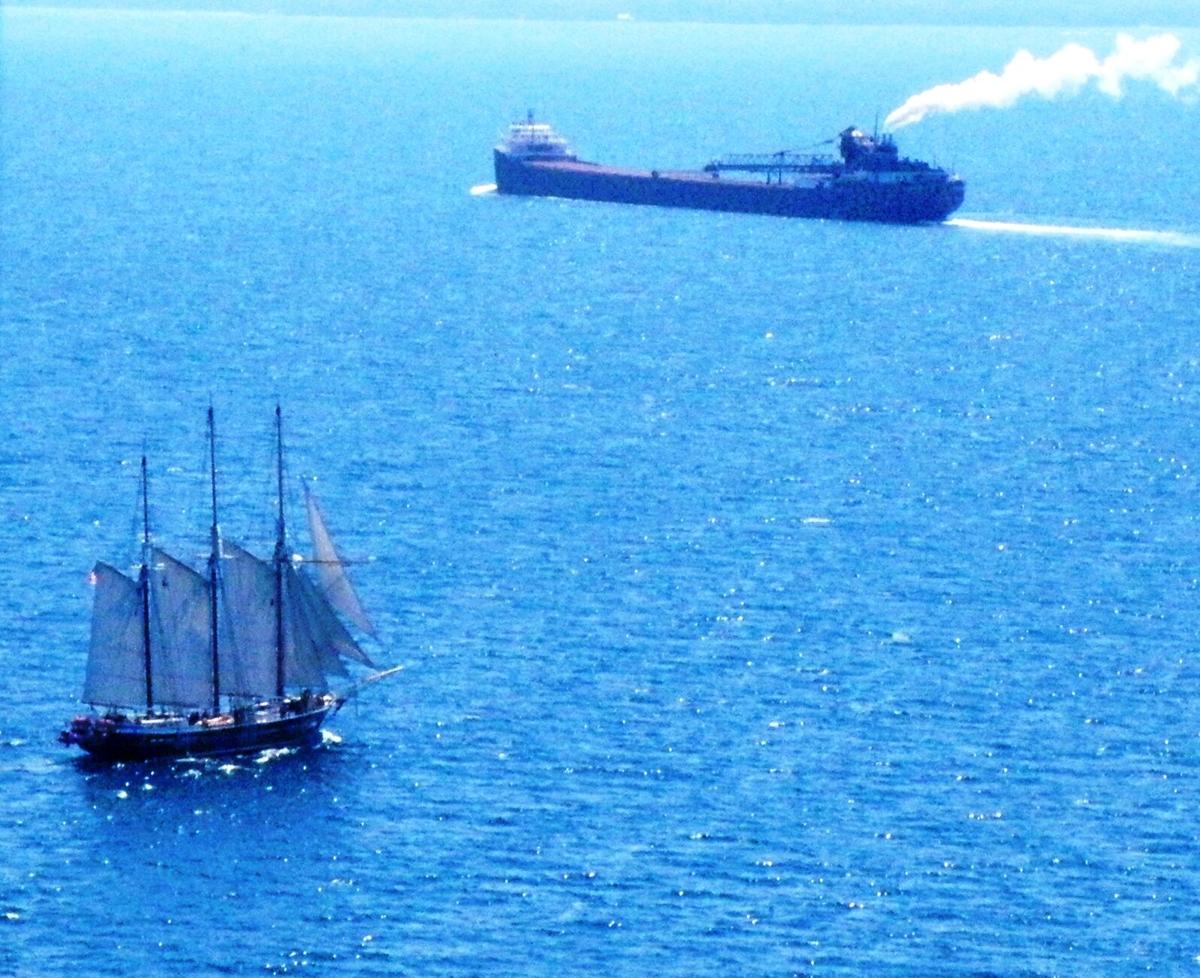 On July 4, 2016, as we were driving across the Mackinac Bridge to spread a loved one’s ashes at bear camp in the U.P., my wife snapped a photo of two such majestic ships that were passing 200 feet below — a tyrannosaurus iron-plated freighter, and a wood-chiseled, three-masted tall ship. 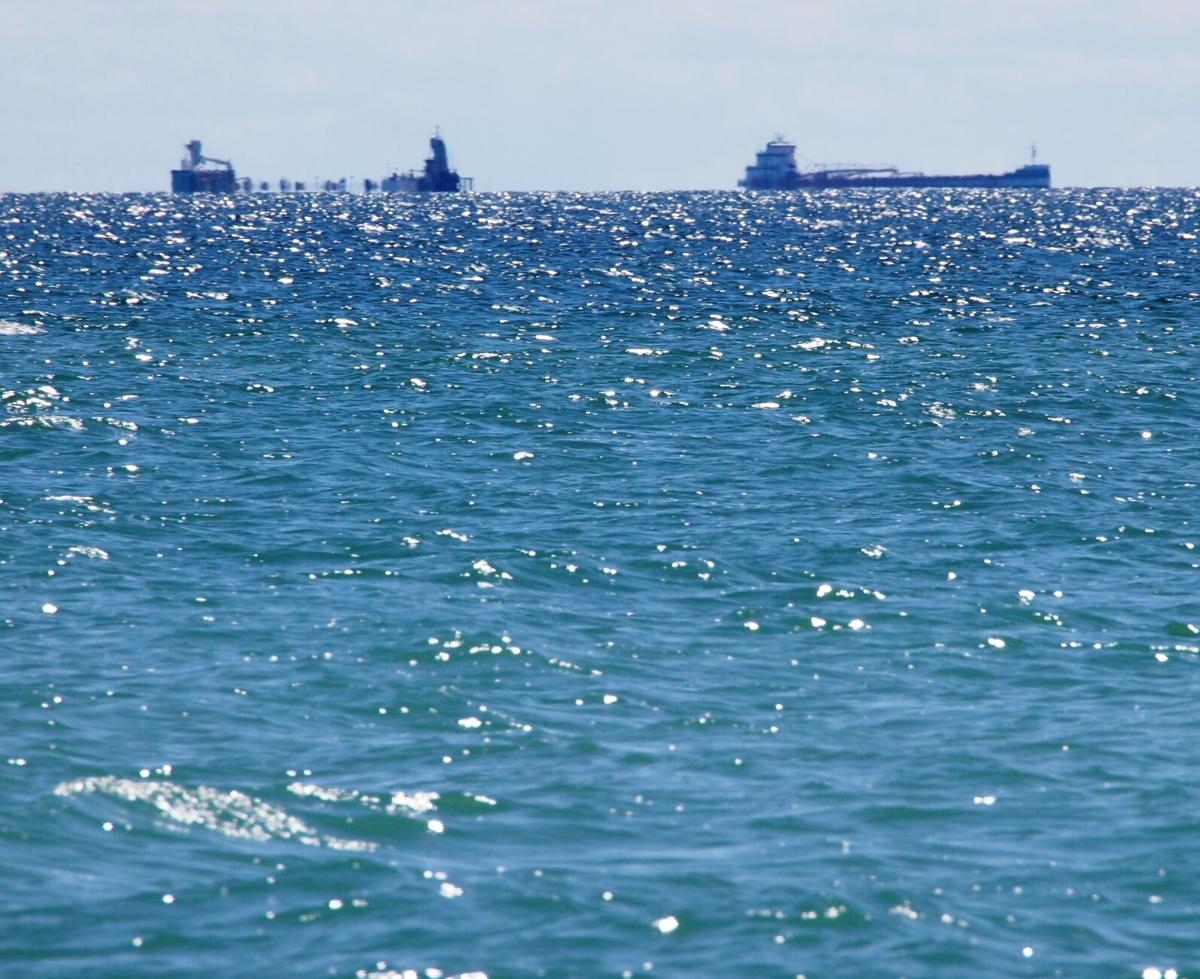 Two great freighters pass each other just off the Elberta/Frankfort coastline. 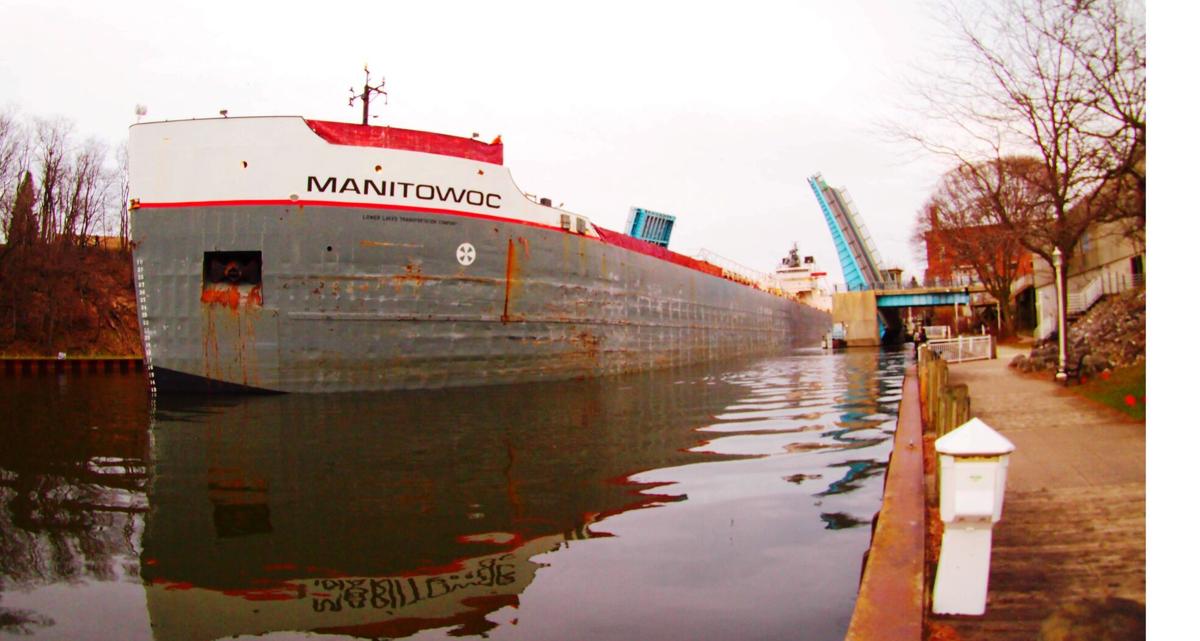 The 630-foot Manitowoc slowly makes its way down the Manistee River Channel and its parallel riverwalk in 2020.

In spring, 2020, these two tall ships passed on another on West Grand Traverse Bay.

On July 4, 2016, as we were driving across the Mackinac Bridge to spread a loved one’s ashes at bear camp in the U.P., my wife snapped a photo of two such majestic ships that were passing 200 feet below — a tyrannosaurus iron-plated freighter, and a wood-chiseled, three-masted tall ship.

Two great freighters pass each other just off the Elberta/Frankfort coastline.

The 630-foot Manitowoc slowly makes its way down the Manistee River Channel and its parallel riverwalk in 2020.

They are the eagles of shipping on the Great Lakes, majestic vessels with conflicting silhouettes that will cause a person to pause and take notice.

The colossal ones — commodity-carrying freighters that measure more than two football fields bow to stern — can be seen jutting from the horizon, from miles away.

Tiny dancers by comparison that have been artfully constructed of nails and sails to mirror their seafaring heritage, the smaller, more delicate ones with their regal profiles are pushed and pulled by the wind like the clouds above them.

On July 4, 2016, as we were driving across the Mackinac Bridge to spread a loved one’s ashes at bear camp in the Upper Peninsula, my wife snapped a photo of two such majestic ships that were passing 200 feet below — a tyrannosaurus iron-plated freighter, and a wood-chiseled, three-masted tall ship.

Talk about being in the right place at the right time. As I drove across the bridge at 30 miles an hour — white knuckles, one eye closed and all — our eagle-eye view from the high-arching middle made an ideal perch from which Jeanne snapped her picture.

What eagles do for bird watching, such vessels do for ship watching. And while happenstance is what it is, there are Facebook clubs that track shipping movements to guide ship watchers to reliable sites of observation, almost down to the minute.

Those Facebook websites include Manistee Ship Watch, Ludington Ship Watch, and Ships of Muskegon. Nearly all the ships bound for, and departing, those ports travel through the Manitou Passage between Leelanau County and the Manitou islands, which are located about 12 miles west-northwest of Leland, making that community and its immediate area an excellent place from which to watch the passing ships.

And whether you peer through binoculars from the platformed peak of the Arcadia Scenic Lookout in Benzie County, a.k.a., Inspiration Point, which, at 800 feet, is said to be the highest point of elevation on the state’s Lake Michigan shoreline; the 35-mile-long Sleeping Bear Dunes National Lakeshore that rises 460 feet over the water’s surface and which, 10 years ago, was named “The Most Beautiful Place in America” by Good Morning America; the lilliputian village of Elberta in Benzie County — population well under 400 — and its lofty bluff that towers nearly 260 above Lake Michigan; or anywhere along the 300 miles of coastline that stretches from just south of St. Joseph to the dunes and beyond to the north, there are plenty of places to take up the hobby of ship watching.

Though it’ll take you just over two hours to travel there by car from Traverse City — a beautiful trip, nonetheless — one of the very best places for ship watching is along the Straits of Mackinac, where ships pass from one Great Lake to the other, and where the freighters sometimes will measure more than 1,000 feet in length, or nearly as long as an ocean-going aircraft carrier. To see freighters that length is truly special.

“I have always felt some sort of nautical, mysterious type of romantic connection between the ships, the lighthouse and life saving stations along the Great Lakes, some from passing eras that take us back to our roots and connections,” said Pastor Patrick Pointer of Manistee, who is a master woodcarver and maritime artist who specializes in Great Lake maritime history.

“You need a good lens on your camera at Arcadia. At Sleeping Bear, we saw (the ships) from the lifesaving station at the tip just a few miles north of the dunes. Another good place is the Great Lake Shipwreck Museum and Lighthouse at Whitefish Point (on Lake Superior), where ships travel to and from the Soo Locks.”

Living in Manistee, Pointer often makes his way to the Manistee River that tethers Lake Michigan to Manistee Lake, the latter around which foundries are located that still receive freighter-delivered coal, and more.

That channel through the heart of the city is edged by a 1.5 mile long walkway that allows ship watchers get up close and personal with Lower Lakes freighters coming and going — perhaps the best place for ship watching anywhere to be found — and teases them to maintain a walking pace with the slow-moving ships that typically poke along at less than 2 miles per hour from big lake, to little lake.

Walking alongside those freighters that measure 625 feet and longer, and that carry 20,000 tons of coal and other cargo, in the Victorian Port City of Manistee, can be easily and accurately scheduled, thanks to the many followers on Manistee Ship Watch who track the various shipping movements on Lake Michigan and report what time the ships will pass the Manistee Lighthouse as they enter the river channel.

“Watching a freighter come into Manistee never gets old,” said Judy Crockett, of Manistee. “No matter where we are, or what we are doing, if we hear the blow of a freighter horn, we head down to watch. It’s just something that you do when you live here.

“One of my most memorable moments in freighter watching was several years ago when a Great Lakes cruise ship was docked in the Manistee River channel and a Great Lakes freighter came in. It was hard to believe the river was wide enough to accommodate both side by side as the freighter passed by the cruise ship. It seemed like they were just a few feet apart.”

As far as scheduled tall ship traffic goes, the best place to watch for them will be West Grand Traverse Bay, where the schooner the Manitou was set to sail multiple times each day from Memorial Day through the fall.

Owned and operated by the Traverse Tall Ship Company, the Manitou is a replica of an 1800s “coasting” cargo schooner, similar to those that sailed the Great Lakes and the Atlantic Ocean. It is one of the largest sailing vessels on the Great Lakes.

“We just go where the wind takes us,” said Wendy Foss, office manager. “We’ll start sailing around Memorial Day from Discovery Pier. We’ll sail the bay area where there are lots of beautiful things to be seen with all the orchards, forests and beaches.”

Designed for passenger service, the Manitou delivers a Noon Sail, Afternoon Sail, and Evening Sail, with each outing lasting about two hours. It also offers multi-day cruises in September. With an overall length of 114 feet, beam of 21 feet, displacement of nearly 100 tons, and over 3,000 square feet of sail, the Manitou is easily spotted and photographed by ship watchers along the Grand Traverse Bay region.

The ship also offers three- and four-day sailing excursions to the nearby islands, bays and coastal villages of northern Lake Michigan. And, in conjunction with Inland Seas Education Association, Manitou operates the Schoolship Program, which provides an environmental, historical, and sail training education for students during the spring. For more information go to tallshipsailing.com.

Just in case you happen to get a good photo of a freighter, tall ship or some other boat on one of the Great Lakes, you should know the Great Lakes Seaway Partnership recently opened its next photo contest. People can submit their favorite photos of Great Lakes freighters, tugboats and barges in the Great Lakes-St. Lawrence Seaway System. The contest ends when the seaway closes for the 2021 season, usually in December. Winners will be announced in May 2022. greatlakesseaway.org