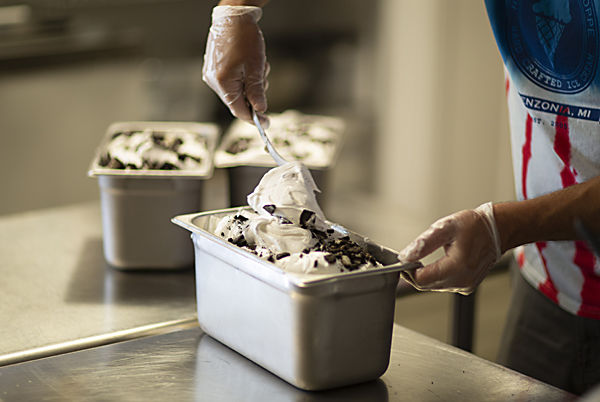 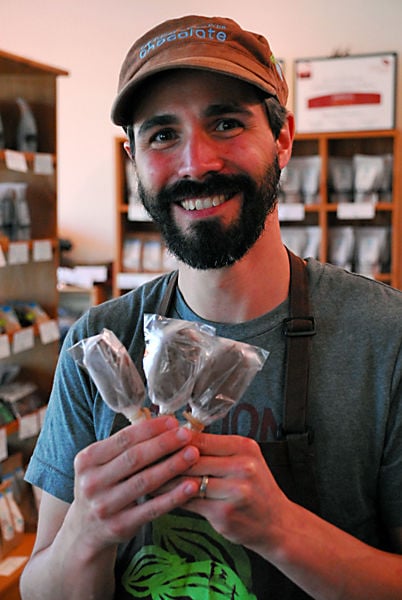 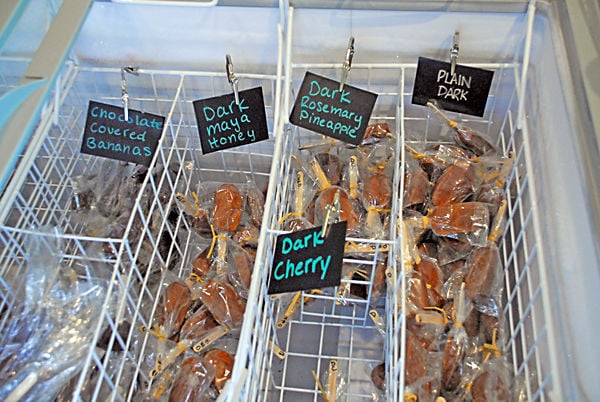 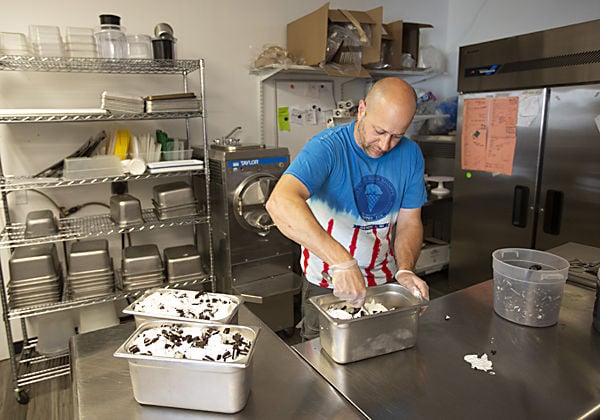 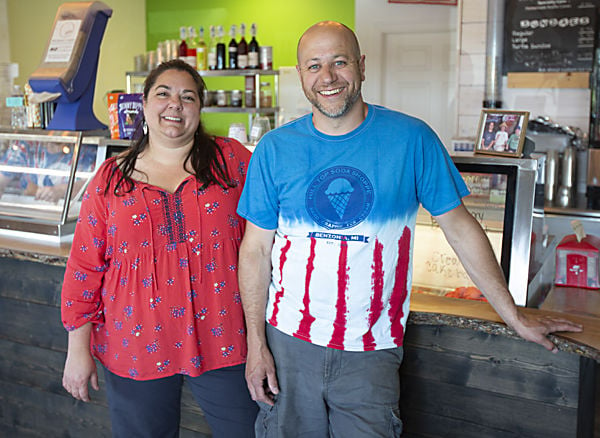 Victoria and Chris Mekas pose for a photo on Wednesday at Hill Top Soda Shoppe in Benzonia. 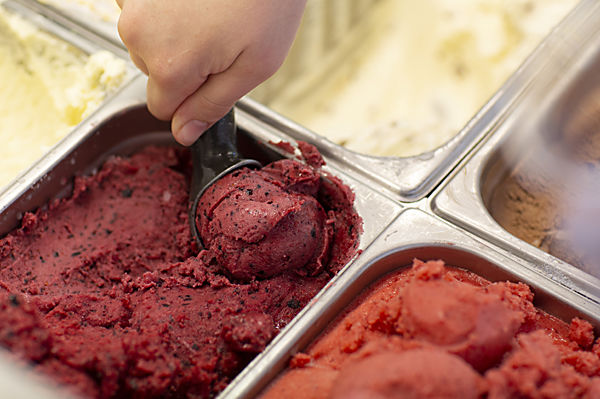 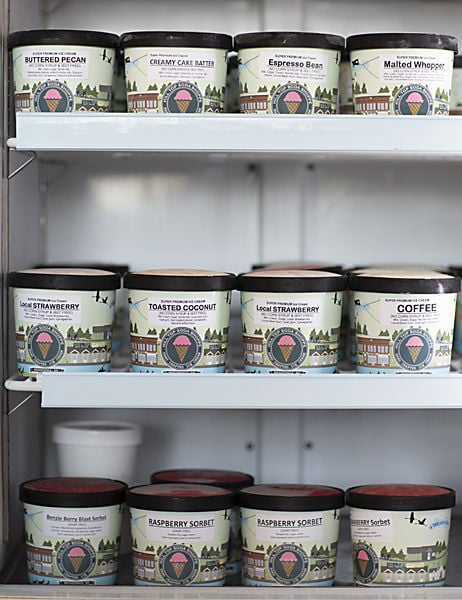 Ice cream is displayed for sale on Wednesday at Hill Top Soda Shoppe in Benzonia. 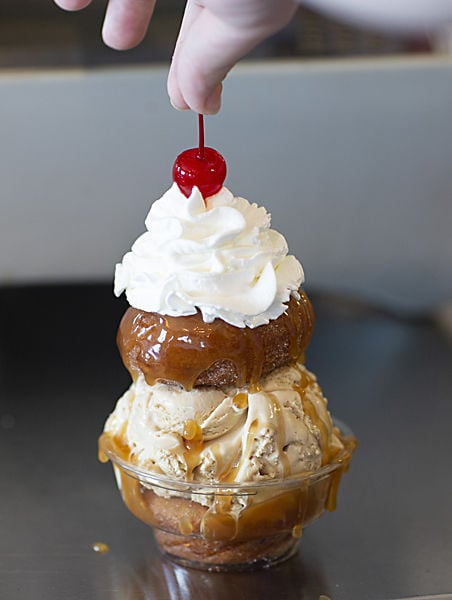 Victoria and Chris Mekas pose for a photo on Wednesday at Hill Top Soda Shoppe in Benzonia.

Ice cream is displayed for sale on Wednesday at Hill Top Soda Shoppe in Benzonia.

Many flock to Grocer’s Daughter Chocolate in Empire to enjoy the handcrafted fudgesicles that come in various flavors, including traditional chocolate, espresso, chia, caramel and mango habanero.

“They’re unlike fudgesicles we had when we were growing up,” said DC Hayden, who owns Grocer’s Daughter Chocolate with his wife, Jody Hayden. “They’re more like chocolate ganache. They are really popular. Families can come in and look at our (fudgesicle) flavor of the week.”

“They sound really great and when customers give them a try, they become the favorite and they’ll buy a bunch of them,” DC Hayden said.

The Haydens source their chocolate from Ecuador where they travel once a year to meet with farmers. They also use dairy from Shetler Family Dairy in Kalkaska and honey from Sleeping Bear Farms in Beulah.

“In the summertime, it’s nonstop cold chocolate treats, fudgesicles and truffles and we have a lot of other things in the shop that are fun,” Hayden said. “It’s really fun for us on a personal level to have relationships in our community. It’s kind of the foundation of our business as well.”

Sourcing goods from local ingredients is the name of the game in northern Michigan, and Hill Top Soda Shoppe in Benzonia is no exception. Owners Chris and Victoria Mekas craft their premium ice cream with dairy from a small family-owned farm in New Era, which is roughly an hour and a half south of their store.

The ice cream is made with 16 percent butter fat and is GMO- and corn syrup-free. They couple also source all of their berries from Michigan farmers.

A summer favorite is the Benzi Berry Blast that is made in both ice cream and sorbet forms. It includes strawberries from Grossnickle Farm in Kaleva, cherries from Putney’s You Pick Farm in Benzonia, blueberries, currants, gooseberries, raspberries and Saskatoon berries.

“It is a very, very seedy sorbet and ice cream,” Mekas said. “It is a little seedy for some people but others love it. We take that same blend and make a little smoothie.”

The couple also owns a coffee shop, Petals & Perks, in Frankfort, where they have the Benzi Berry Blast smoothie on the menu. Their two other businesses include Lynn and Perin Mercantile Co., a gourmet food retail store next to Petals and Perks, and Victoria’s Floral Design in Benzonia.

Hill Top also boasts ice cream sundaes, including the popular Donut Sundae made with a cinnamon-sugar doughnut on the bottom topped with a scoop of vanilla ice cream, caramel and another dougnut on top.

In downtown Traverse City, another chocolatier serves up homemade ice cream. Mary and Brian Daily are the franchise owners of Kilwins Chocolates located on Front Street. The couple has owned the business for 25 years, and each year they choose a new summer theme.

Kilwins is headquartered in Petoskey and has 125 franchise stores across the nation. The chocolate maker specializes in a number of gourmet treats, including its famous homemade marshmallows, which can be used in s’mores or dipped in rich sauces.

“We have big, long marshmallows that are 3 inches long and we put them on a stick and dip them in homemade caramel or chocolate,” Daily said. “They’re not like store-bought marshmallows. They have a completely different taste. They’re just awesome.”

The shop also has a toasted coconut marshmallow to match the summer theme.

The best part of summer is the tourist and repeat customers, Mary Daily said.

“We look forward to seeing our tourist people that come in. My husband likes to photo bomb them,” she said, noting that people come back from years past and show them photos they took in their store where Brian Daily is smiling in the background.

“He gets a big audience. The chocolates are also popular,” she joked.