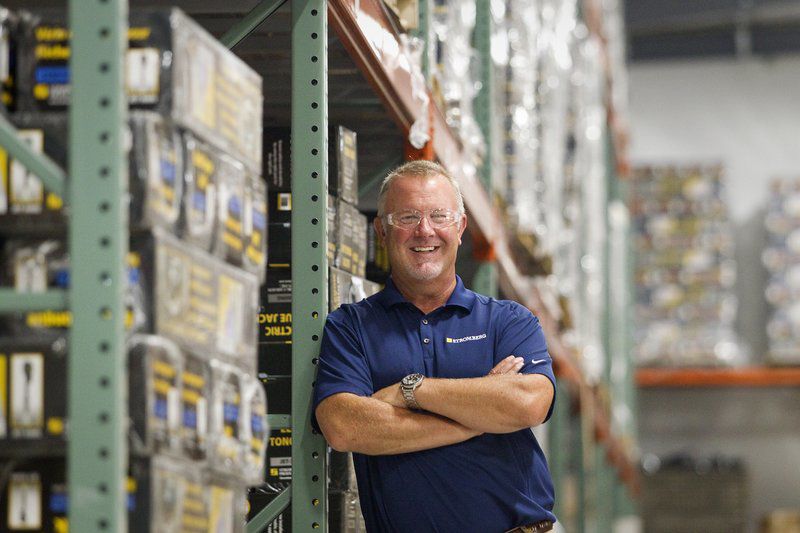 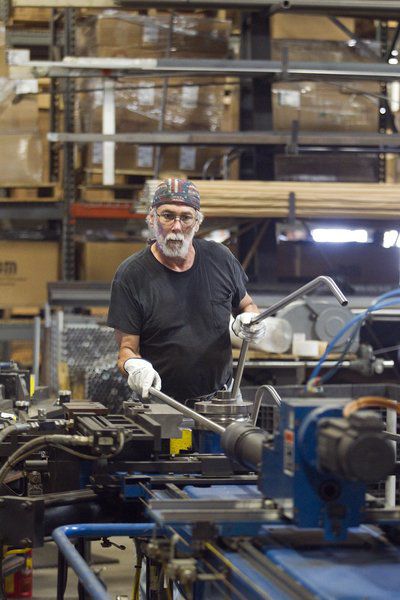 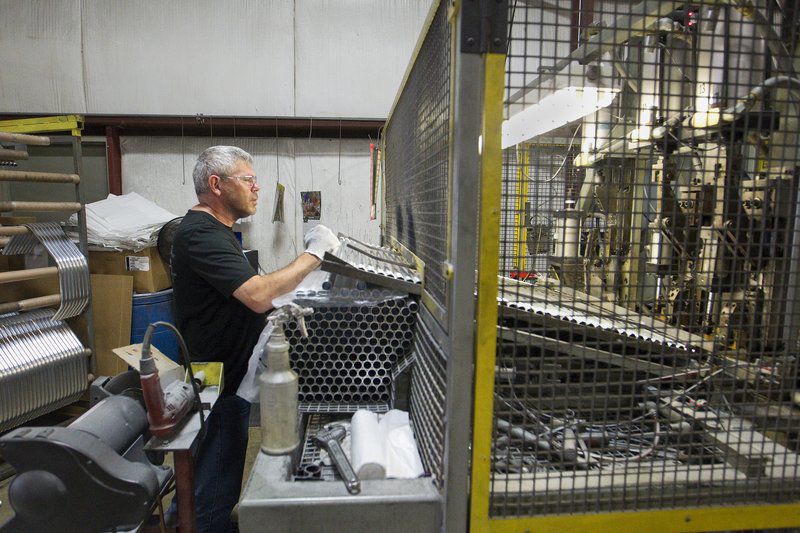 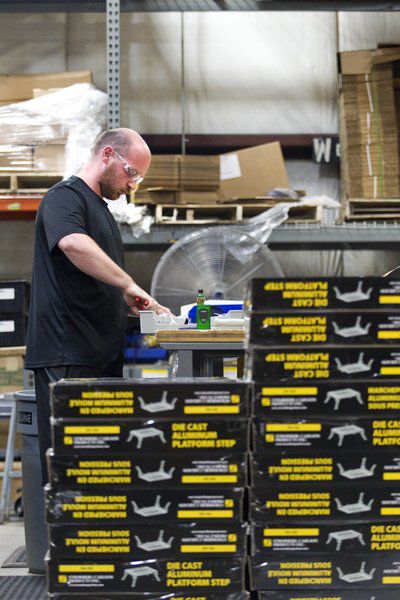 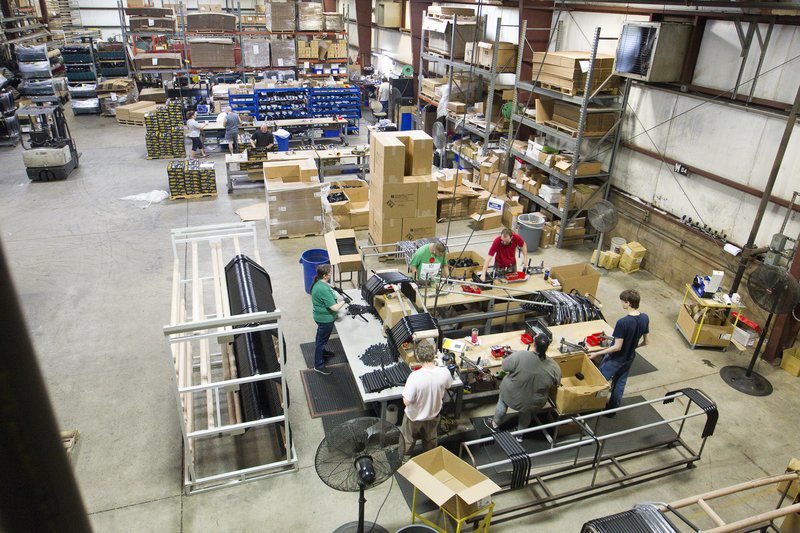 Editor's note: This article was published in Grand Traverse Business magazine's Fall 2018 issue. For more stories from the magazine, click here to read GT Business in its entirety online.

But about anything else one needs to embrace the recreational vehicle lifestyle can be found at the family-run Traverse City company.

Just like the alliterative slogan "Stromberg Strong" that adorns shirts and the company's website, Stromberg Carlson is a strong player in the recreational vehicle aftermarket. The company that started in 1959 delivers products from its Traversefield Drive address to dealers across the country and into Canada.

"We ship all over North America," said president Bob Brammer, Jr., who owns the company along with his brother, Charles, who serves as vice president. The Brammers are the third-generation leading the business.

"We have shipped into Europe if we have the right product."

The last word in that statement is the first thing at Stromberg Carlson, which is more of an assembly company than a manufacturing plant.

"We are a products-focused company, not a process company," Brammer Jr. said.

Several of these simple-sounding devices are million-dollar sellers. But it's not all about complexity. Brammer equated it to producing a vehicle, sometimes it requires a luxury vehicle, other times an economy sedan will do.

"Then there are other places where we just want to be a Buick and be a really solid, value-conscious product."

John Spaulding, director of communications and events at NTP-STAG, one of the largest providers of aftermarket products, parts and accessories for the RV market, said Stromberg Carlson isn't one of the industry's biggest suppliers, but is one of the best.

"I would certainly say that," said Spaulding, whose relationship with Brammer and Stromberg-Carlson goes back more than 20 years to when he was working for a trade magazine.

Brammer said cost and features are often the most important things when it comes to the aftermarket industry of recreational vehicles.

Stromberg Carlson also produces a hose-and-cord caddy that keeps things from "nesting and unwrapping" during transit.

"That's a price point item," he said. "It needs to last for five to eight years and do a really good job. And it only costs $19."

Compared to the automotive industry, Brammer said the recreational vehicle industry is relatively small. That puts the emphasis on the product and the people. Brammer said Stromberg Carlson is comfortable with both.

"My industry is still a relationship business," Brammer said. "It's like walking down Front Street and seeing Maurie Allen during Halloween with his hot apple cider out front (of Captain's Quarters) or Bill and Craig Golden out front of Golden Shoes ... It's more personal; it's more about relationships.

"You need to make good products and you need to have good quality programs. There's no question that those are still part of business.

"You still have to ship on time ... but it's still about us more than it is about a number."

Spaulding said family-run companies like Stromberg Carlson closely align with the values of the recreational vehicle owner and user.

"They provide products and service to the public so they feel more comfortable and satisfied with the decision to become an RVer," Spaulding said.

Stromberg Carlson was founded by Bob Brammer's grandfather, David Stromberg. Brammer said his grandfather was "a self-taught engineer" who did a most of his work as a tool and die company in the Detroit area. He eventually moved to Traverse City and had a tool and die plant on 16th Street.

The second generation of Brammers, Bob Sr., made manufactured home accessories in the facility that now is home to Right Brain Brewery. Several of those parts came from David Stromberg's tool and die company.

"I still hear stories about how materials would be delivered to my dad's plant and they'd use a lift truck and run across the street, run the presses at some of my grandpa's trial presses and then bring the parts back across the street for assembly, paint or whatever had to happen."

Eventually, Bob Brammer Sr. "expand out of the manufactured housing product line" and settled into the RV market. In the early days of Stromberg Carlson, the company completed nearly all of the work from start to finish.

"There was a time when my dad wouldn't make a product if he didn't own the process," Bob Brammer, Jr. said.

Stromberg Carlson had multiple shifts and a wide variety of specialized employees.

"There were times when we had six or seven welders, eight or nine assembly guys," he said. "We had shipping departments and press operators. We had it all."

But it became tougher to compete, particularly with foreign companies, so the company shifted away from the production process. As many of the raw materials as possible are sourced from local companies.

Stromberg has 35 full-time employees and another 5 or 10 temporary workers, as many or more as what the company employed in its heyday. And the company keeps growing along with its physical structure.

"We've been building slowly," Brammer Jr. said. "One or two employees a year for the last 10 years — ever since the recession."

Brammer Jr. said he expects the upward arc to continue by sticking to the same principles: quality products at a reasonable price. He's also excited about a line of bicycle racks that sold well in a limited rollout at Gander Outdoors.

"Where is Stromberg Carlson going?" said Brammer Jr. "The same place we've always been. We've been introducing five new products a year for the last 10 years, because new product growth is where it's at."