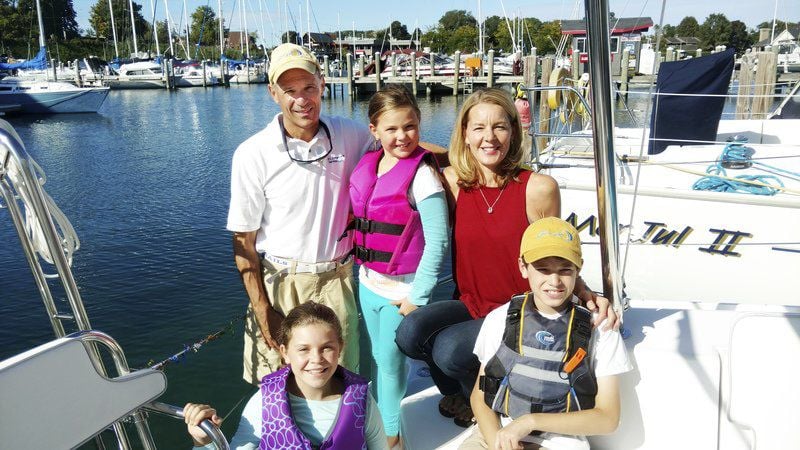 Keith Forton, left, is pictured with his family. The “L” in his company name, K&L Navigational Services LLC, stands for his wife’s first name. “When I move boats from A to B, she is the one that usually has to pick me up at point B,” he said. 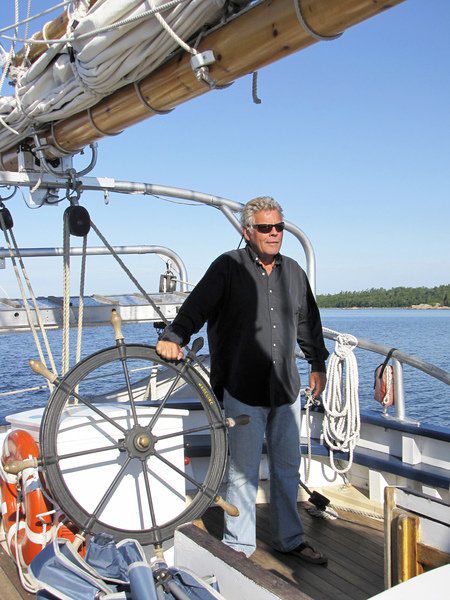 Captain Bryan Smith stands at the wheel of the Madeline. 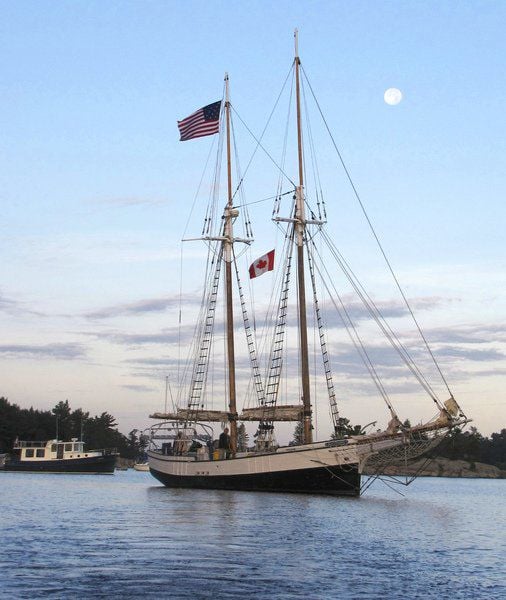 The Madeline at Bear Drop Harbor.

Keith Forton, left, is pictured with his family. The “L” in his company name, K&L Navigational Services LLC, stands for his wife’s first name. “When I move boats from A to B, she is the one that usually has to pick me up at point B,” he said.

Captain Bryan Smith stands at the wheel of the Madeline.

The Madeline at Bear Drop Harbor.

Editor's note: This article was published in Grand Traverse Business magazine's Spring 2018 issue. For more stories from the magazine, click here to read GT Business in its entirety online.

TRAVERSE CITY — Captain Bryan Smith was shot at while ferrying a ship on Lake Huron five years ago, forcing the then 61-year-old Inland Seas sailor to return fire.

Not to worry — the 21st century master and commander and his 9-person crew of the twin masted schooner Madeline was taking part in a crowd-pleasing battle re-enactment of the War of 1812.

The 66-year-old Traverse City resident for the past three decades has sailed a fleet of boats of all beams and vintages from Point A to Point B — wherever those points might be — at the request and trust of those vessels’ owners.

And whether pushed across the temperamental waters of the Great Lakes by the wind or motor — or both — Captain Smith takes the business of delivering another person’s boat from Point A to Point B, as serious business.

“Safety of the crew and ship, of course, is most important,” said Smith, founder and president of the Traverse City-based US Captains Training. “In the early days we just did (delivered) a lot of private boats and yachts; in later years we’ve done the same with larger ones.”

Smith said it was his delivering the Madeline in 2013 into Ontario’s Georgian Bay that remains among his favorite sea-going stories.

“I had a great crew, and two rail guns,” said Smith, who’s sailed local waters for nearly 40 years. “Our mission was to re-enact the Battle of Wasaga Bay, an important battle of the War of 1812, to the Canadians. The schooner Lynx joined us. Re-enactors from the shore fired at us, and we fired back at them.”

Hours later and finally “out of costume and out of war mode, the Canadians loved us and treated us very well at their festival.”

“Our obligations complete, we sailed to beautiful Bear Drop Harbor in Georgian Bay and enjoyed some rest and relaxation,” said Smith, who was the only paid mariner of the otherwise all-volunteer Madeline crew.

Keith Forton is a physics instructor at Traverse City Central Senior High, and, like Smith, is a seasoned, seasonal licensed ship’s captain.

“Moving a vessel for someone, or having passengers aboard, brings on tremendous responsibility,” said Forton, 59, of Traverse City. “You are responsible for, number one, the safety of all on board, and, number two, the safety of the vessel. It’s a great feeling when the owner meets you at point B and takes custody of the vessel.

“Managing a vessel while it is under your care involves maintenance, or any trouble shooting while underway. It’s of great importance to deliver a vessel for the owner ready to go when the owner or family step aboard.”

While Smith and Forton also captain charter vessels for passenger enjoyment, and take pride in offering educational courses in sailing and safety, it’s in having critical knowledge of the varied vessels they sail for other owners that calls them back to the fresh water seas summer after summer.

“Moving a vessel from point A to point B, normally without the owner, constitutes much of my work in the summer,” said Forton, owner of K & L Navigational Services, LLC. “All the captains in this area are top notch, and are always willing to help out in any way possible. They all have a tremendous respect for the weather, the water, and how quickly things can change, or when the weather goes bad. They all have a tremendous respect for their profession.

“Living in this area, all my work is seasonal — May through October. Some captains will travel south and work for the winter.”

Forton said he has captained boats for others that has taken him to Lake Michigan ports that include, among others, Chicago, Milwaukee, Grand Haven and Escanaba, as well as to Alpena and Port Huron on Lake Huron.

Those vessels have ranged in as many sizes as there are trees in a forest, including 65-foot power boats, 26-foot to 55-foot sail boats, “and all lengths — mostly all sail — in between.”

The length of time it takes to sail from Point A to Point B depends, of course, on nautical miles that chart the ship’s course, and weather.

“The trick is finding a good three to four day weather window,” said Forton. “Something that I learned from my dad early on in the context of a delivery is, ‘when you get favorable weather and sea conditions, you push as far as you can, as quick as you can, as long as you can, because when the weather or sea conditions turn bad, you want that to be a short day.’ Severe thunderstorms, especially at night and in dense fog in the vicinity of heavy boat or freighter traffic, always brings on a high level of anxiety.

“Typically, moving a boat involves minimal crew, often times (sailing) solo. This helps with the logistics, and return travel. If the owner or other crew members want to go, they are always more than welcome, and normally will stay with the boat after arrival.”

More than 160 Maritime Heritage Alliance volunteers labored more than 40,000 hours between 1985 and 1990 to construct the Madeline — which is fitted with a 56-foot deck over a 91-foot-long tip-to-tale craft — and which bears the same name of a 19th century Great Lakes sailing vessel.

“I’ve sailed her for 20 years all over Lake Michigan, Huron and Erie,” said Smith.

As a licensed, independent contractor, Forton said he has been sailing all his life.

“I consider myself very blessed to have been able to grow up in this area (Traverse City), on our family’s 37-foot sailboat,” said Forton.

“I truly consider this one reason why my family, my parents and siblings, are still very close — a result of sharing some very rough nights at anchor, or getting through some bad weather.”

While Smith and Forton’s licensing permits them to offer various sailing services, as delivery captains, they routinely sail taunting seas on the decks of maiden ships — at least maiden to them.

“Most of the trips just seem to blur together,” said Forton. “One that always will bring on a smile (was) delivering a 26-foot sailboat from Suttons Bay to Detour, to a new owner in who lived in Ontario. Unfortunately, I had to move the boat solo, but the weather window was perfect.

“Once you get your license, you have quite a bit of latitude. You try your best to never let your guard down — things can go wrong, really quick. The ones I have the most vivid bad memories are of when there was some type of mechanical failure — limping into harbor at night with a bad diesel.”