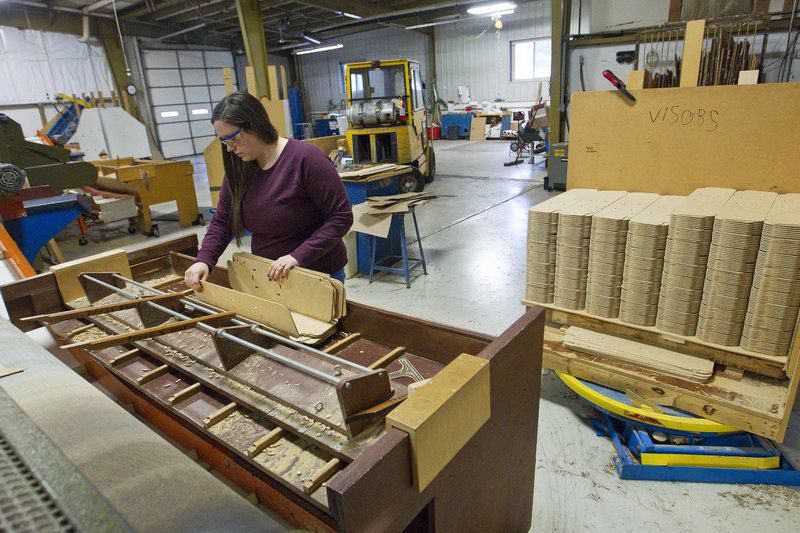 Elizabeth Nelson checks visors as they come out of a die-cutting machine at Fultz Manufacturing in Traverse City. 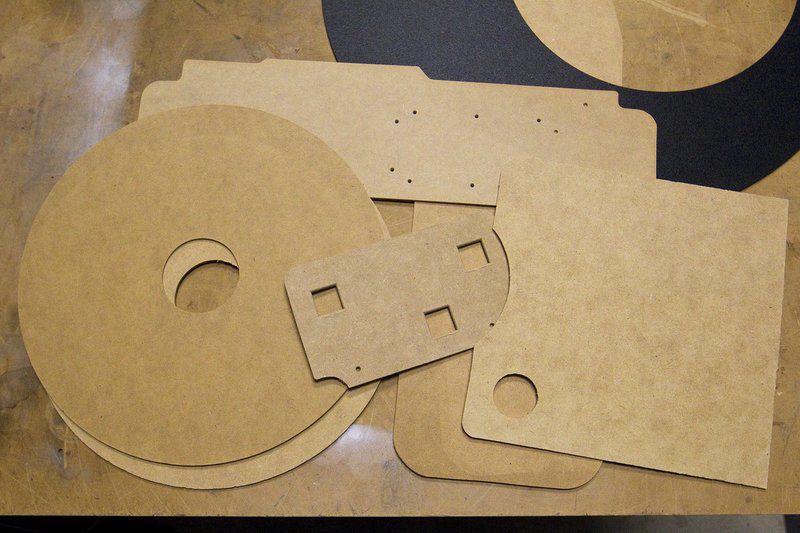 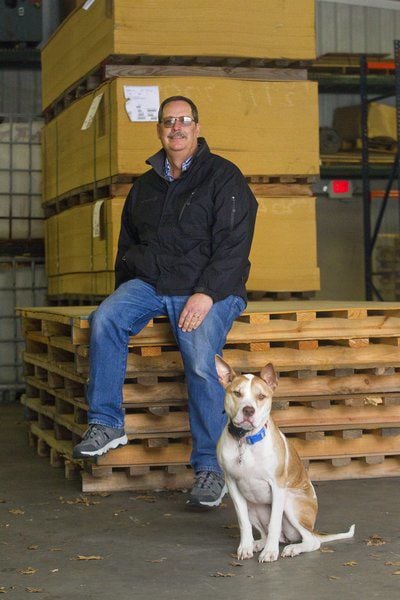 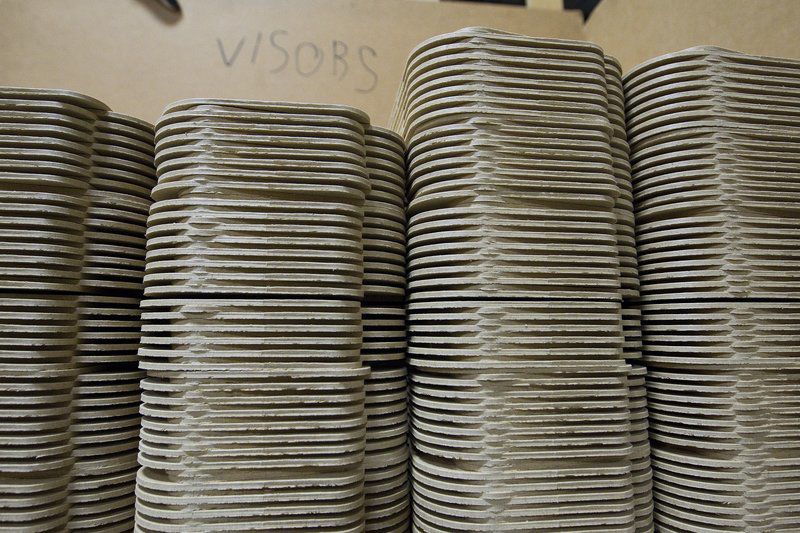 Visors for trucks sit in stacks at Fultz Manufacturing in Traverse City. 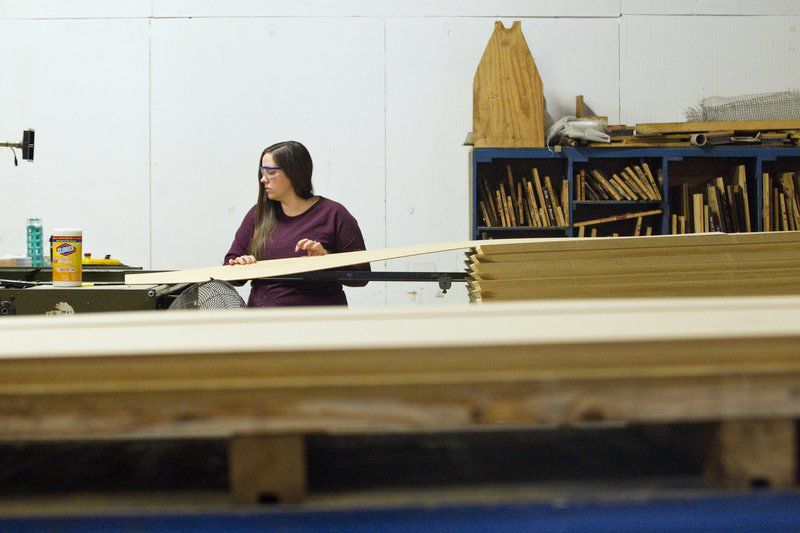 Elizabeth Nelson feeds a sheet of high density fiberboard into a machine for die-cutting at Fultz Manufacturing in Traverse City.

Elizabeth Nelson checks visors as they come out of a die-cutting machine at Fultz Manufacturing in Traverse City.

Visors for trucks sit in stacks at Fultz Manufacturing in Traverse City.

Elizabeth Nelson feeds a sheet of high density fiberboard into a machine for die-cutting at Fultz Manufacturing in Traverse City.

TRAVERSE CITY — The little company that could almost didn’t.

Fultz Manufacturing, a custom die-cutting company that began in 1973, was about to close its doors for good about 10 years ago. Company president Dennis Bartlett was the lone employee at the time.

“Back in 2008 when we were really struggling, I ran the whole shop completely for two years. Just me.” he said of the business at 1631 Park Drive.

Fultz began its run with a single die-cutting press used to cut the plywood base for a jump seat in Dodge pickup trucks. A decade ago, it had a bid out to make the spare tire cover in Toyota Camrys.

It was truly a last-ditch effort.

“We were going to close the door in 2008,” Bartlett said. “Then the Lord blessed us with a contract. That right there saved the company.”

Today, Fultz Manufacturing is still finding a way to get it done. The company that once had as many as 11 employees now has two.

One of those, Dale Hansen, is retiring this year. Hansen had been let go when times were at their bleakest, but jumped at the opportunity to return.

“He’s actually been here longer than I have,” Bartlett said of Hansen, who popped his head into the office to say something funny to the president and owner of the company. “He’s been here 32 years. I had to lay him off for two years. I called him up and said, ‘Dale, I’ve got a big contract. Do you want to come back?’ He came back that same day. He’s very loyal; a very good employee.”

The other employee is Bartlett’s daughter, Elizabeth Nelson, who hired on two years ago.

There was a time when Fultz was the sole supplier of spare tire covers in six different styles for the Ford Focus, which ceased production in May.

Fultz for 28 years was a big producer of mirror-backs for the company GIA, which was a part of Home Interior Parties. Fultz used to produce a semitrailer load a week. Fultz still produces the backs for mirrors. That business also has waned a bit.

Over the years, Fultz has stamped out products including bird house dividers, motorcycle seat backs, game boards for a company in Ludington, highchair seats for Costco, spool tops for wire and even joints for teddy bears. Fultz at one time made the paddles for the one-person paddle ball toy.

The top product that comes out of Fultz Manufacturing today forms the inside of a visor for semitrailers. Fultz makes 150,000 of those a year. Convex mirror backs are No. 2 on the list.

“They have excellent customer service; they’re easy to deal with,” Celenza said. “When you call, they pick up the phone. They’re a good company.”

A unique product that Fultz produces is painter palettes that serve as the backing for paper mixing boards for automotive body filler. Bartlett said Fultz makes about 50,000 of them a year.

“It’s a customer,” Bartlett said of the palettes. “It’s 5,000 of them a month, and they’re sold at your local automotive store. Thirlby Automotive sells them, They’re sold all across the country.”

The palettes are one of the unique products that Fultz Manufacturing cranks out. There’s always the question of where the next product will come from. Bartlett says he relies on a higher power to deliver it.

“Where are we headed today?” said Bartlett, repeating an interviewer’s question. “I rely on the Lord and my Christian faith to help guide us.”

Bartlett doesn’t know where the next product is coming from, but is confident it will. Today’s unknown could turn into tomorrow’s known commodity.

“We just need to find the next little thing, the next little project,” he said. “It could be right here in Traverse City. There are so many new start-ups that don’t know we exist and I don’t know they exist. Things like that. There is that potential.”

Whatever comes along next, Fultz Manufacturing will continue to live within itself. That was a lesson Bartlett learned from company founder Charles Fultz.

“Chuck taught me a lot of things,” Bartlett said. “We don’t go into debt for anything. We’re a debt-free company. We pay 100 percent with cash. Bills come in; I pay them within 10 days.”

One time, Bartlett was going to buck that policy. Mr. Fultz would have none of it.

“The only time we so-called got credit was when we took on that new Toyota contract,” Bartlett recalled. “Chuck was not too happy with that altogether. He said, ‘Where are you going to get the material?’ I said, ‘Well, I’m going to borrow from my home equity credit for the material.’

“He said, ‘No you’re not. You have to go to the supplier and get better terms.’ Well, our supplier’s terms are 10 days. That’s all we get to turn around and purchase material.”

Bartlett had to call the company’s West coast supplier and tell it Fultz couldn’t take possession of five semitrailers of the raw material because they couldn’t pay for it. Bartlett then contacted Toyota and got them to pay within 30 days of the product being delivered, three months sooner than the norm.

“We were able to keep the thing funded, and within six months we were back on terms with our supplier paying them within 10 days,” Bartlett remembered.

That was one of the lessons he learned from “the one of a kind” founder of the company, who hired Bartlett in 1994. A lot of the other ways the business works came about the hard way.

“Chuck had a very good philosophy that most owners would never do,” Bartlett said. “He took and hired me in, he taught me how to turn on the computer, how to do payroll, how to bid on parts, quantities and stuff like that. I had a background in manufacturing, but he taught me all that stuff.

“That was November 18th when I got hired in. He took a two-week vacation in December for Christmas and he came back three months later.”

When Fultz did return, he gathered the employees and told everyone that Bartlett was now in charge. Bartlett was the general manager of Fultz manufacturing until Charles Fultz died on Nov. 23, 2015. The death of the founder was rough on Bartlett because it came a day after his mother died.

Bartlett and his wife bought the company from the Fultz estate in February of 2016.

As the company has long done, it finds a way. Somehow, some way.

“We keep chugging along,” Bartlett said. “We’re just a small company. But 45 years is quite something to be in business that long.”

Bartlett ended a conversation about the past and future of Fultz Manufacturing with the same optimism.

“At this time we’re still here,” he said from his office attached to one of two warehouses on site, one of which is mostly leased out. “We’re thankful for that.”