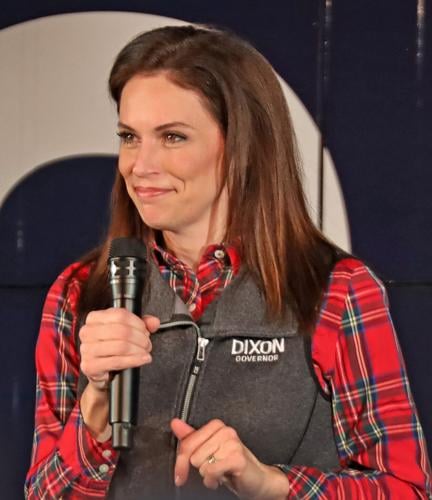 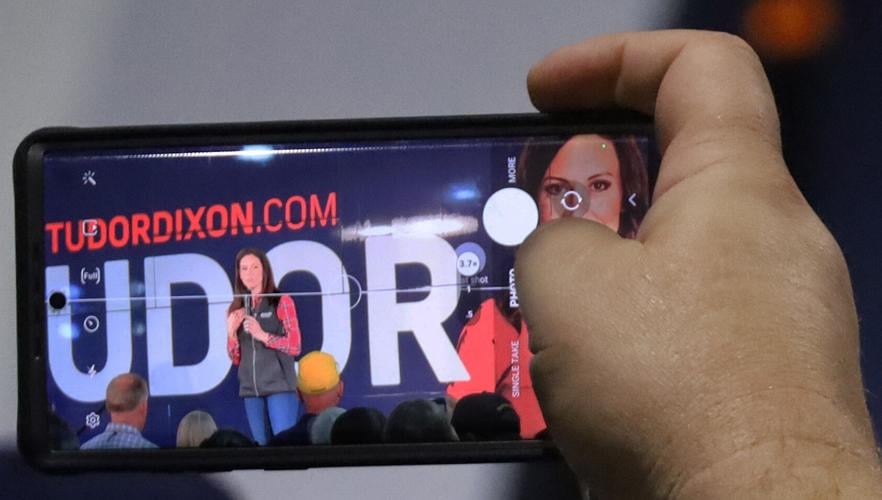 An enthusiastic fan in the audience takes a photo with his phone.

An enthusiastic fan in the audience takes a photo with his phone.

About 300 people crowded into a private airplane hangar on Aero Park Drive to welcome her. They cheered, waving signs and taking photos with their phones, when she came out on the stage to speak.

“We want to make sure that we see everyone in the state,” Dixon said later, “so we’re trying to get around the entire state. And this is a very important area that we get our message out (to),...

“We want to make sure that people know that we want to bring the state back.”

According to a recent WDIV/Detroit News poll, Dixon is currently polling at 43%, nine points behind incumbent Gov. Gretchen Whitmer, who is polling at 52%.

Traverse City residents Jim Dovner and Randy McClure, who attended the rally, said Dixon has their votes because of her proposed economic policies and plans to give $1 billion to support police entities in the state.

As a retired Michigan State Police trooper, Dovner said the most important issues for him as a voter are “family and freedom and budget.”

Dovner and McClure shared their concerns about the current rate of inflation and the closure of many small “mom and pop” stores during the pandemic.

Former state Sen. Jason Allen hosted the evening’s event for Dixon. His opening remarks were followed by a prayer led by Pastor Chuck Townsley from Fresh Winds Church in Interlochen.

The national anthem was sung by Asuka Barden, who works for Barden Lumber in Boyne City. Michigan State Rep. Jack O’Malley recited the Pledge of Allegiance with three military veterans standing at attention beside him.

Members from Dixon’s campaign team passed out yellow campaign signs that said, “Get Schools Back to Basics” in large black letters. In her speech, she focused on her plans to hire tutors for schools throughout the state as a way to “get kids back to where they need to be.”

Dixon referred to her debate with Whitmer last week and said if she is elected her office will implement a “Parents Right to Know Act,” to mandate that teachers share knowledge about their students with the parents, regardless of what the student wants.

“The other side said, ‘Is third grade reading that important? We can just talk about sex and gender,’” Dixon said, as some in the audience expressed their disapproval by booing.

She also discussed her plans for economic development in Michigan and said, if she’s elected, she will remove the government from business and put the business in government.

When she was asked later about how that would affect local businesses, such as those based in Northern Michigan, Dixon said that business owners have stressed that there are too many state-mandated regulations and it’s making their jobs more difficult.

For Dixon, she said events like Tuesday evening’s rally are important for her to meet with potential voters and get to hear what issues matter most to them.

“It’s about coming out and talking to folks like you, making sure that we’re having these rallies, inviting anyone that wants to come, and then meeting with the folks afterwards,” she said.

According to Sara Broadwater, Dixon’s director of communications, Dixon will be holding events in Alpena and Midland this week, and will continue to tour around the state until Election Day next week.

Whitmer is planning a campaign tour around Michigan and has scheduled a stop in Traverse City.

TRAVERSE CITY — Gov. Gretchen Whitmer told a Traverse City crowd it’s time for supporters to put their “foot on the accelerator” in the days l…