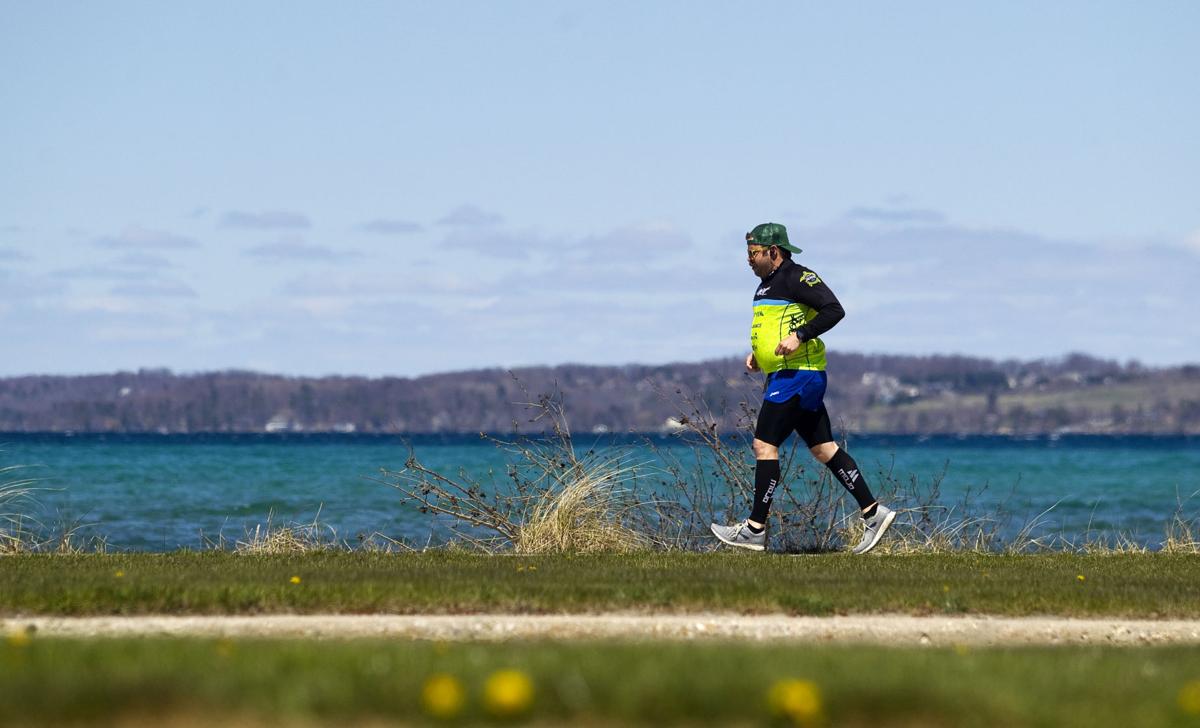 Andy Belanger runs along West Grand Traverse Bay on Tuesday in Traverse City. Belanger plans to run all 116.7 miles of M-22 on May 22 as a fundraiser for The Leelanau Conservancy. 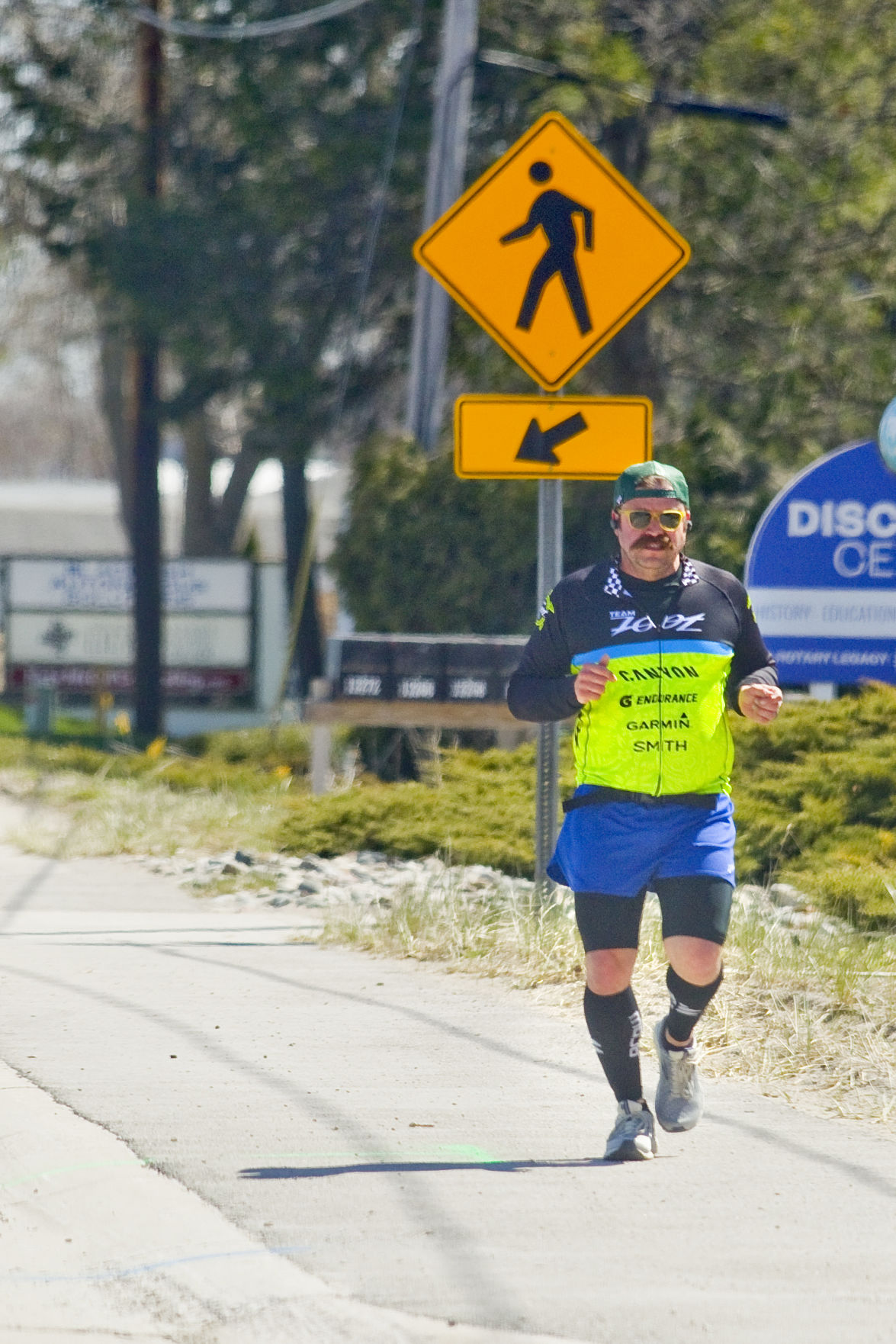 Andy Belanger runs along West Grand Traverse Bay on Tuesday in Traverse City. Belanger plans to run all 116.7 miles of M-22 on May 22 as a fundraiser for The Leelanau Conservancy.

While he’s not crisscrossing the United States like the fictional Forrest Gump, a Leelanau County man is running for the forests (the water and the land as well).

Andy Belanger aims to run the entire 116.7-mile length of M-22 on May 22 to raise money for the Leelanau Conservancy’s Palmer Woods 1,000-acre project.

Belanger seeks to raise $5,000 for the project, his first attempt at a philanthropic enterprise.

“It’s my first fundraiser, but it’s not my first dumb idea,” Belanger said in his matter-of-fact manner.

What else would you expect from a 39-year-old in sales/beer distribution for H. Cox and Son. Last Memorial Day weekend, Belanger designed and completed his own full triathlon (2.4-mile swim, 112-mile swim, 26.2-mile run) in back-to-back days.

“I don’t take any of this too seriously,” said Belanger, who sports a handlebar mustache. “I’m not a professional; I’m not rail thin.

“If you can’t have fun doing this, there’s no point.”

Belanger will depart from M-22 in Manistee County after work on Friday afternoon, sometime between 2-4 p.m. He plans to finish at M-22 and Division Street in Traverse City sometime on Saturday, most likely in the evening.

Belanger, whose progress can be tracked on the Andy Running M22 Facebook page, estimates it will take him “30-ish hours” to complete the endeavor.

“That’s very ish,” he said. “There could be some walking in there and in the course of 116.7 miles, you never know.

However long the trek takes, everyone on staff at the Leelanau Conservancy is impressed.

“I think it’s absolutely amazing,” said Conservancy Development Director Meg Delor. “When Andy called and told me what his plans were, I was astounded.”

Then conservancy officials found out the reason for the run.

“We were thrilled,” Delor said.

As of Tuesday at noon, Belanger was nearly halfway to his goal of raising $5,000. When he first took his fundraiser to Facebook, Belanger said it doubled his donations overnight.

The Leelanau Conservancy owns 721 acres in the Palmer Woods Forest Reserve east of Glen Arbor. The conservancy has a campaign to add 350 additional acres to the project.

The expansion will add recreational opportunities.

Belanger said the conservancy’s ideals closely align with his own.

“I love what the conservancy has done for the county,” he said. “I’m a big advocate of fresh, clean water and clean land.”

Belanger is a proponent of pushing himself physically, whether as part of an organized event or something of his own creation. He has done “too many marathons to count” among a variety of short- and long-distance races.

Belanger has completed nearly a dozen half-triathlons and one official full triathlon in Louisville, Kentucky in the fall of 2018.

The idea for the Run M-22 event came when Belanger rode his bicycle over the route last summer.

He trained for six months, peaking out at about 50 miles a week.

“You don’t know if you can do something unless you try,” Belanger said. “Why not? How far can I push my body? That’s a question I’ve asked myself a few times.”

Belanger said there will be some breaks during the event, but nothing extended.

“All in one shot,” he said. “Yes, there will be some resting. But no sleeping. Just get it done.”

Belanger will be accompanied on the route for safety. Some of M-22 will have runners joining in, other times there will be family members in cars.

“They’ll keep me motivated, safe and going in the right direction,” he said.

“It’s my first fundraiser, but it’s not my first dumb idea.” Andy Belanger

Follow Andy Belanger's progress running the entire length of M-22 on his Facebook page at Andy Running M22 or at https://www.facebook.com/andyrunningm22/.