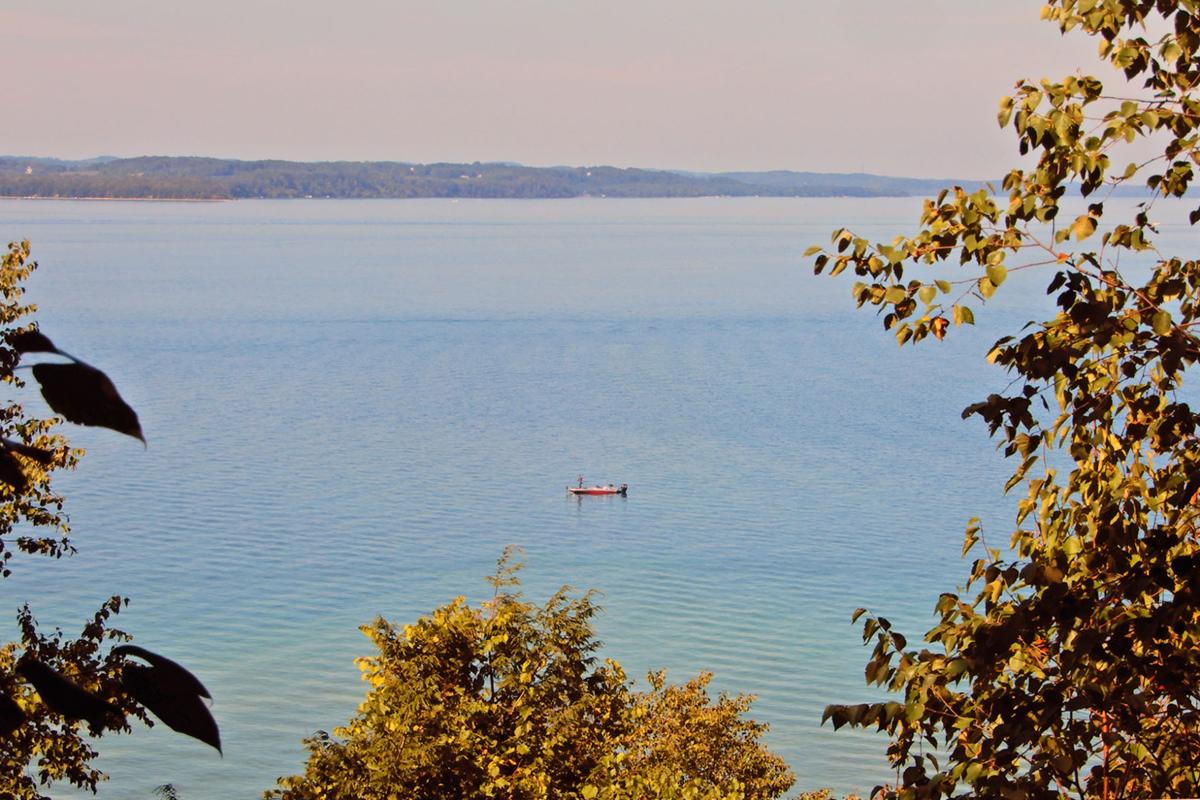 The panoramic view looking out from Eagle's Nest on top of Power Island. 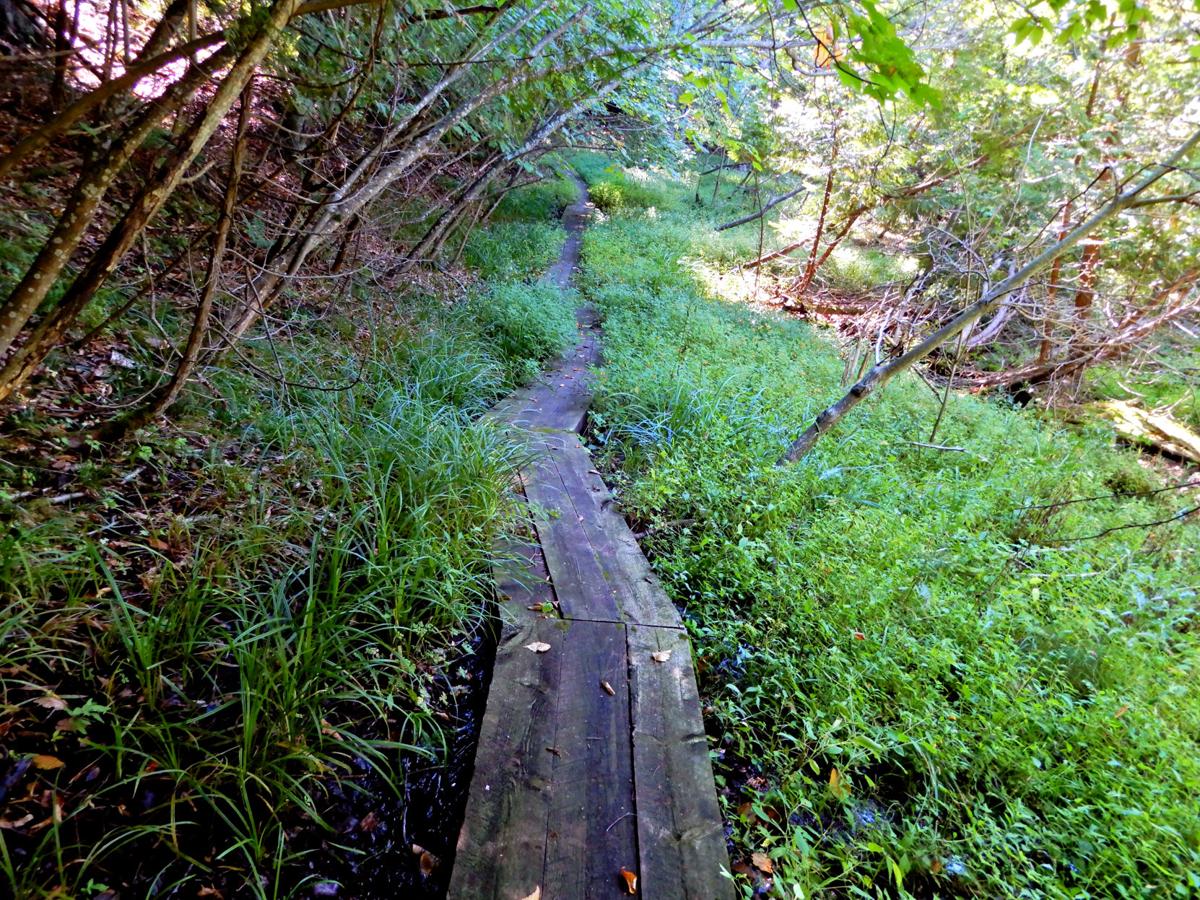 A boardwalk leads across wetlands on the west side of Power island below the ridgeline. 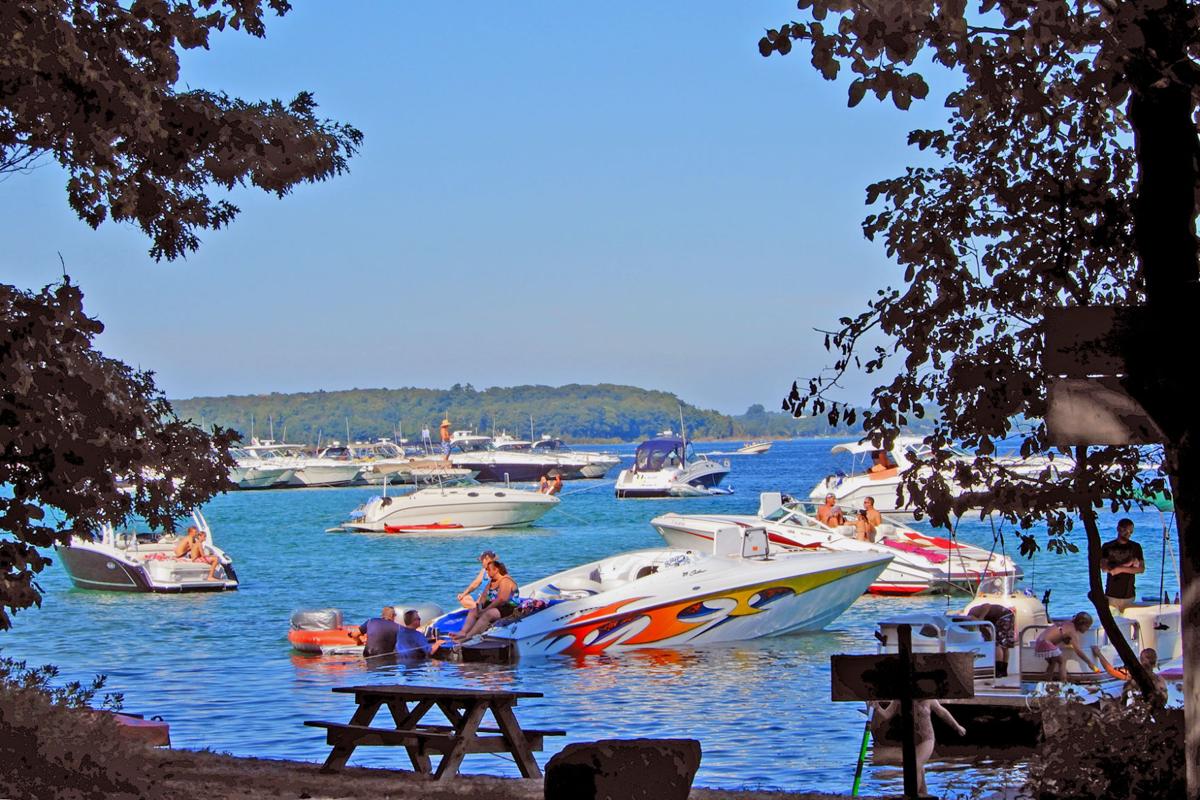 The motorboat set enjoys a late summer day anchored just off the dock area on the leeward side of Power Island. 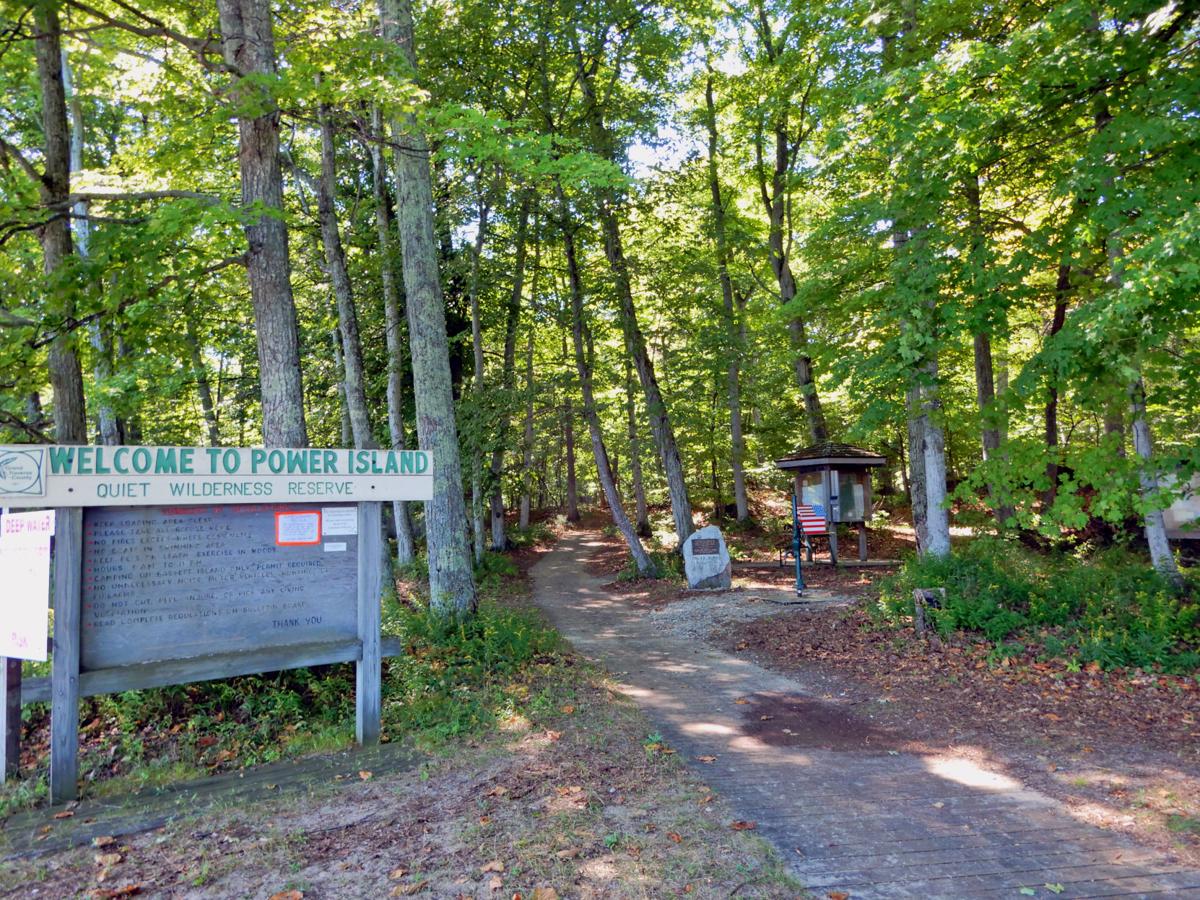 The trailhead area just beyond the dock after arriving at Power Island. 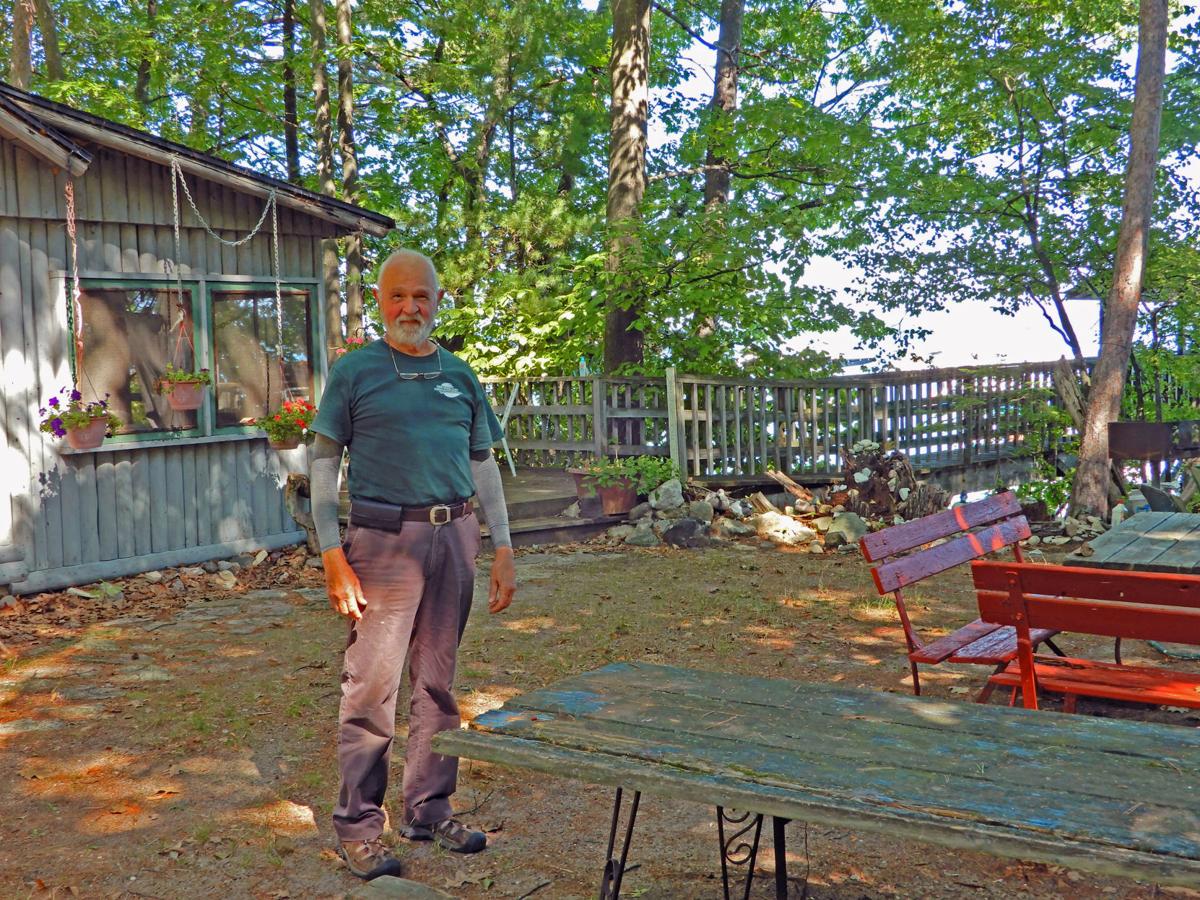 Fred Tank, longtime Power Island caretaker and park ranger, has been spending summers on the island since 1986. 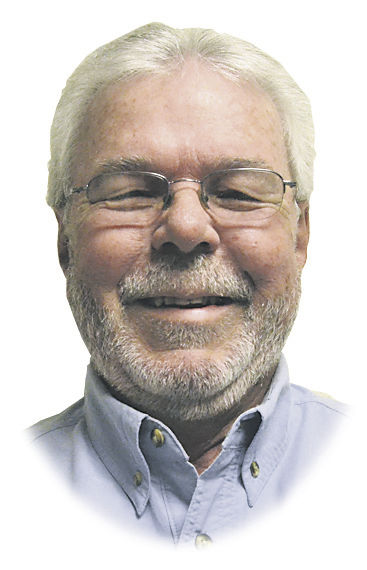 The panoramic view looking out from Eagle's Nest on top of Power Island.

A boardwalk leads across wetlands on the west side of Power island below the ridgeline.

The motorboat set enjoys a late summer day anchored just off the dock area on the leeward side of Power Island.

The trailhead area just beyond the dock after arriving at Power Island.

Fred Tank, longtime Power Island caretaker and park ranger, has been spending summers on the island since 1986.

Grand Traverse County park Power Island is popular with boaters and kayakers. It’s also one of the top geocaching spots on the planet.

Considered one of the Holy Grails of geocaching areas, the park a little more than 2.5 miles off Old Mission Peninsula’s Bower Harbor in West Grand Traverse Bay draws geocachers from around the world.

In 2000, the island was one of the original 75 geocaching spots known around the earth when the sport began. Today there are over 2,670,000 spots hidden around the world and the number grows daily. But Power Island remains a top draw.

On warm summer days it also becomes the go-to gathering place for Traverse City’s motorboat set, which rafts together off the east and southeast shores out of typical prevailing westerly breezes. The 200-acre park that rises over 150 feet above the bay is also a magnet for kayakers on light wind days. There are 10 primitive campsites, a boat dock, picnic areas and about 6 miles of trails that lead up to the top of the island and over to the rocky western side of the isle.

I’m not a motorboater, but every few years I get a yearn to visit the island once again to hike its trails. I watch for light- to no-wind days when I know it will be safe to kayak across the open water. Such a day occurred last summer the weekend after Labor Day; hot, sunny and windless.

It was pleasant paddle across the glass-like bay. I waited until early afternoon to make the crossing. All the motorboats had arrived and rafted on the leeward side of the island, which is where the dock is located. Arriving at the island I paddled by Basset Island, where there were kayakers camping and enjoying the end of summer and beautiful weather.

Heading to the beach, where I pulled my kayak ashore to begin hiking, I had to weave through the maze of anchored boats and swimming dogs. While the aquatic party prevails with people laughing and splashing and music floating across the water, solitary souls can find tranquility on the island even on the busiest days. Most of the motorboat set never venture more than a few yards from water’s edge.

The interior of the island is a treat for hikers. Well-maintained trails lead through a dense forest over to Basset Island, or hikers can climb the high ridgeline that can easily be seen from the mainland. You can hike up to Eagle’s Nest, a great lookout along the rocky western bluff that offers panoramic views of the bay and Leelanau shoreline.

Much of the thanks for the well-maintained trails go to longtime island caretaker and park ranger Fred Tank, a retired NMC professor, who has been spending summers on the island with his wife, Tina, since 1986. They come over in May and stay until October in a cabin that has solar-powered electricity. I always look forward to a chat with them before taking off on my hike.

How many counties offer an island park for their citizens — and visitors — to hang out on, explore and even camp on if so inclined? Not many. Enjoy the opportunity.

There’s a map at the trailhead, which is just beyond the dock and beach area, where the trails start. Once you leave that area, pass the ranger’s cabin and begin to climb up the flank of the ridge, you come to a split where you head over to Basset Island or continue climbing the ridge. There really aren’t any distances posted, but it’s around 1 mile up to Eagle’s Nest where you’re rewarded with a panoramic vista of West Bay and Leelanau Peninsula.

The trail continues on across the top of the ridge where you’ll encounter many large trees that survived lumbering, because of their remote location. It’s a beautiful canopy to walk through. You will come to trails leading on across the top, or you can head down the western side of the bluff to lake and beach level on the backside of the island. That’s where the geocache is allegedly located, but I didn’t find it.

Trails continue to circle for a couple of miles around the southern tip of the island offering stunning views looking down the bay towards Traverse City before leading back to the dock area. In all, my Fitbit said I had hiked over 5 miles.

The bay was still tranquil as I started my paddle back to Bowers Harbor. It had been a good day on land and water.