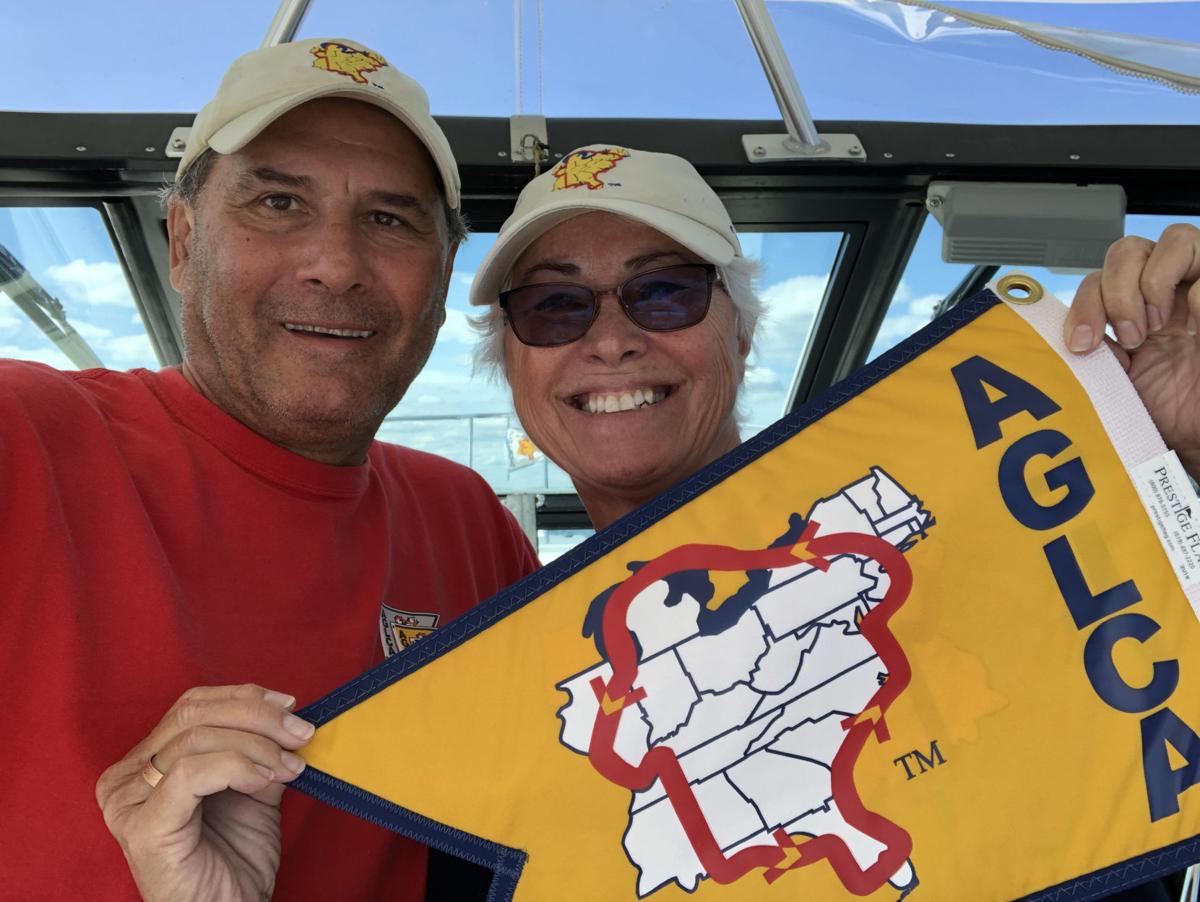 Pat Kernaghan and Janet Ward, of Canada and Suttons Bay, show off the gold burgee they bought in August after finishing America’s Great Loop. 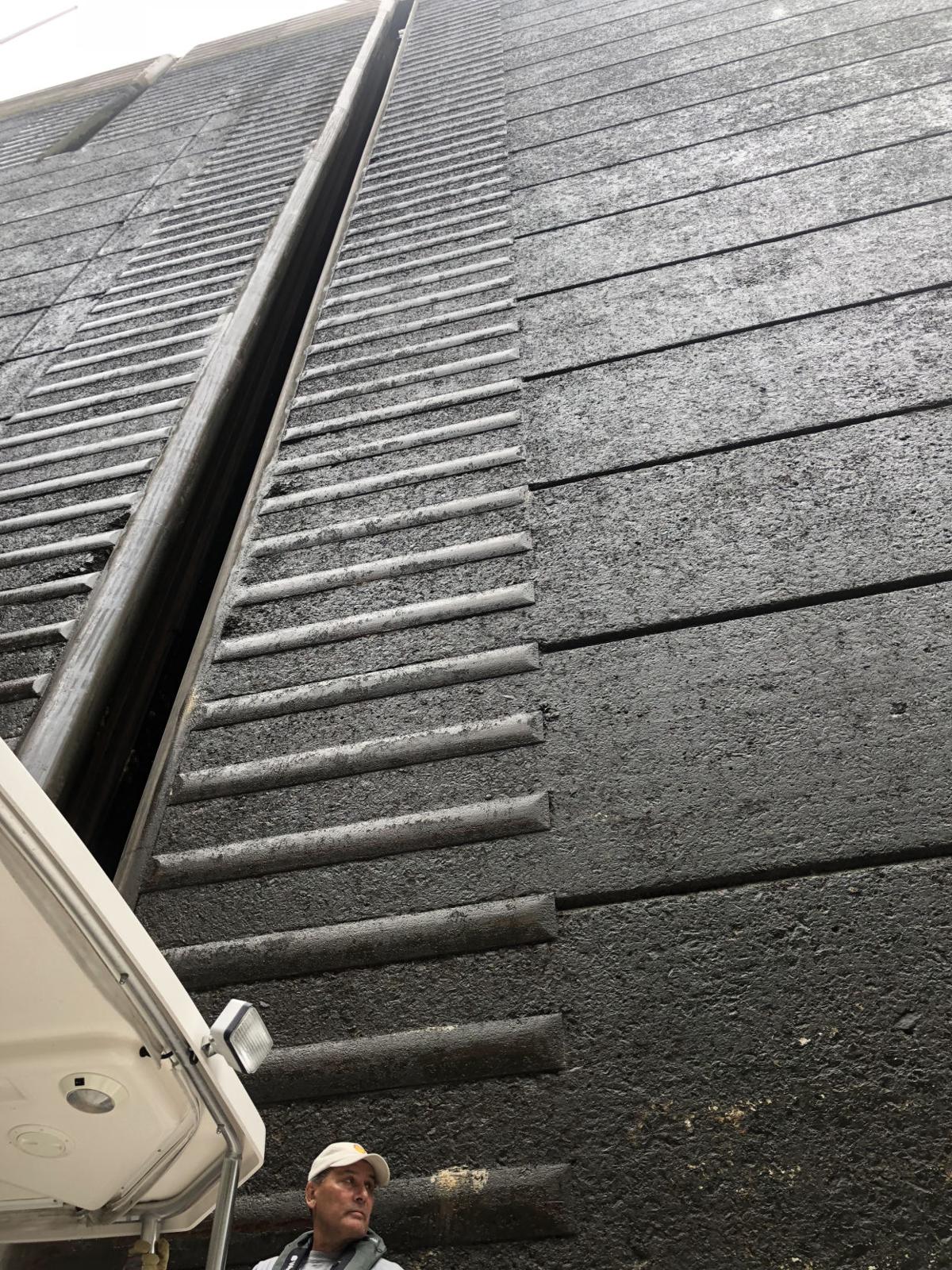 Pat Kernaghan mans the At Last as it goes through the Wilson Lock on the Tennessee River. 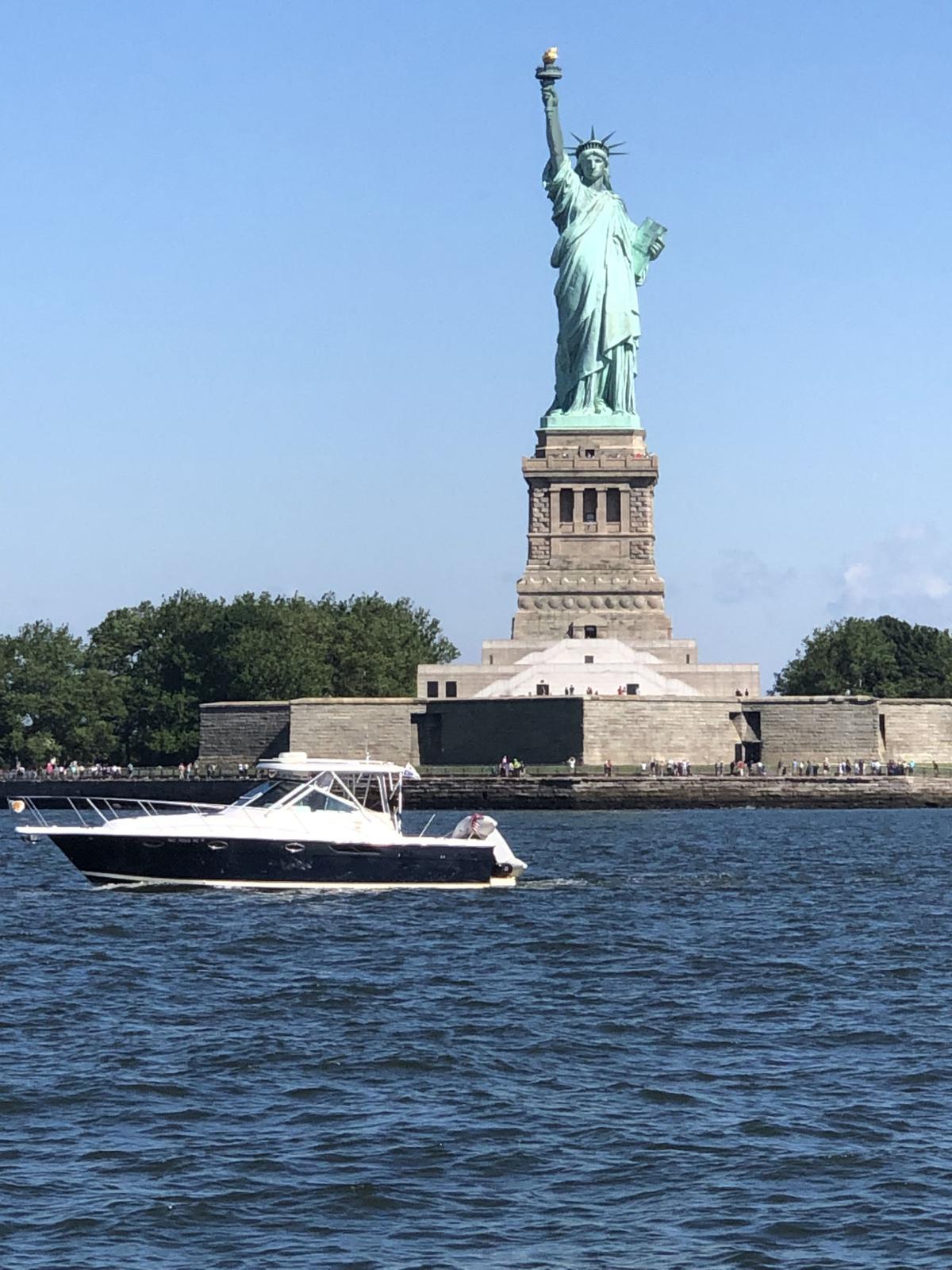 Pat Kernaghan and Janet Ward and their boat, the At Last, cruise past the Statue of Liberty while doing America’s Great Loop, a voyage that took one year.

Pat Kernaghan and Janet Ward, of Canada and Suttons Bay, show off the gold burgee they bought in August after finishing America’s Great Loop.

Pat Kernaghan mans the At Last as it goes through the Wilson Lock on the Tennessee River.

Pat Kernaghan and Janet Ward and their boat, the At Last, cruise past the Statue of Liberty while doing America’s Great Loop, a voyage that took one year.

SUTTONS BAY — Pulling into Suttons Bay after a year of living on their boat was a bittersweet moment for Janet Ward and Pat Kernaghan, who in August completed America’s Great Loop.

They were glad to be home from the 6,000-mile voyage, but finding their land legs also meant the end of an adventure five years in the making.

“I was looking forward to it, but then when we were approaching home I thought, ‘Wow, this is the end of a trip we’ve been planning for years,’” Ward said. “I wasn’t ready to leave. I just couldn’t leave.”

In fact, after pulling into the Suttons Bay Marina, Ward and Kernaghan lived on their boat, the At Last, for another 10 days.

“It was different that it was over ... It’s hard to explain,” said Kernaghan. “It was an incredible time, but I was ready to be home.”

Living together in the close quarters of a boat 24/7 will test any relationship, but for Ward and Kernaghan, who have been married 11 years but live in different countries, it could have been especially stressful.

But they soon fell into a routine of daily tasks, with no fights over who does what.

Home for Kernaghan is Alberta, Canada, where he retired from his career as a steam engineer in the Canadian oil sands so he could do the Great Loop. The couple met in 1996, when Ward was living in Alberta.

“I courted Janet for 12 years before she agreed to marry me,” Kernaghan said.

A retired nurse, Ward is originally from Flint. She now lives in Suttons Bay after buying a home there in 2010.

Kernaghan returned to Canada a couple of weeks ago and, despite his retirement, is now looking for work. If he can’t find it the couple will start the immigration process for him to move to the United States.

Their Great Loop journey started in Suttons Bay in August 2018 and took them south through Lake Michigan and a system of rivers starting with the Illinois River and ending with the Black Warrior River and spilling out into the Gulf of Mexico.

After traversing 180 miles of Gulf waters, they cut through Florida to the Atlantic Intracoastal Waterway, heading up the Eastern Seaboard to the Hudson River and the Erie Canal. From there they crossed Lake Ontario, navigated the Trent-Severn Waterway to the Georgian Bay and the Straits of Mackinac, finally bearing for home.

Along the way they made side trips to the Bahamas, the Great Dismal Swamp in North Carolina and being history buffs, to every museum they could.

“Our whole trip was museums, churches and graveyards,” Kernaghan said. “We enjoy all that history.”

Ward and Kernaghan purchased the At Last, a 31-foot Tiara power boat, in 2012. Neither had much boating experience, but Ward took classes to learn how to helm the boat.

The boat has a memento from their trip — a bullet lodged in her deck. It was New Year’s Eve and they were in St. Petersburg, Fla., enjoying a night out. On their walk home they heard gunshots from overzealous revelers.

Back on the boat they heard a “ping.” The next morning they found the bullet, lodged less than 2 feet from where Kernaghan was standing when they heard the noise.

Before looping, the couple had done some inland boating.

“But not overnight, not on a large boat and not on large bodies of water,” Kernaghan said.

Kernaghan said the Great Loop appealed to him because he’d never seen the southern and eastern parts of the country. That much of the journey was on rivers spoke to his love of history.

“This was a way to see a whole lot of the eastern United States,” he said. “Seeing it from the rivers is how the early Americans saw the country.”

The adventure is what intrigued Ward.

“It was fascinating that you could circumnavigate the entire eastern portion of the United States all by water,” she said.

While on the Great Loop, Ward was responsible for all the “docking and locking,” she said. Otherwise she would have had to handle the lines and jump off the boat to tie it off — something she didn’t want to do.

In a log of their journey, Ward counted more than 100 locks, which raise and lower watercraft between different water levels on rivers and canals.

Ward’s skills earned her the nickname “Captain J,” but docking during strong winds presented some of the scariest moments of the trip for Ward.

“You’d start to maneuver the boat and then you’d feel like you were losing control of the boat,” she said. “It’s awfully scary to have a 12,000-pound machine that’s not doing what it’s supposed to do.”

Another time while docked in Yorktown, Va., the boat started “bouncing” at about 4:30 a.m. Ward got seasick and ended up going to a motel for the night, while Kernaghan stayed to make sure the boat didn’t get hung up on the dock.

The couple says their Great Loop experience was great, but now it’s on to other adventures — like a three-month boating trip from Suttons Bay to Montreal.

“I was looking forward to it, but then when we were approaching home I thought,
‘Wow, this is the end of a trip we’ve been planning for years. I wasn’t ready to leave.
I just couldn’t leave.” Janet Ward