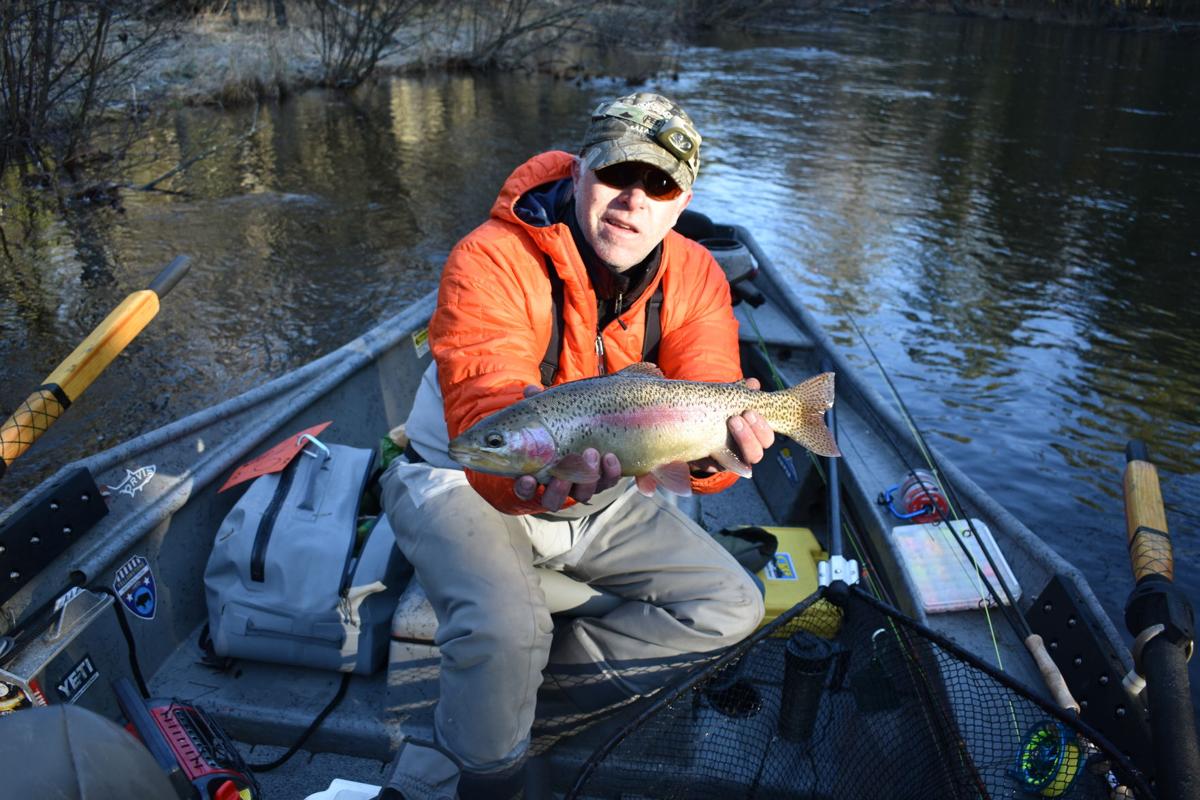 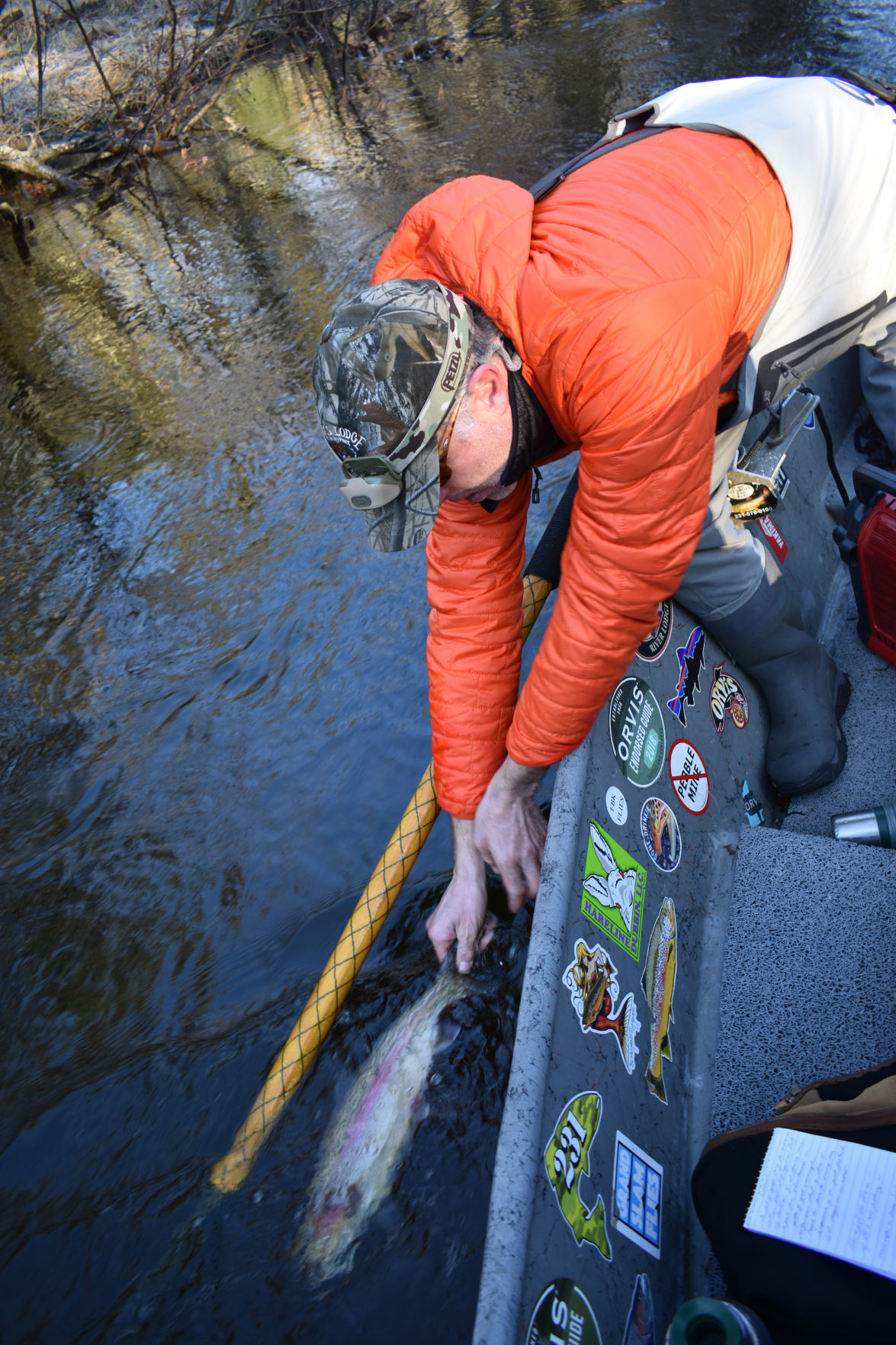 BALDWIN — The way I had it doped out, we had two strikes against us when we started: It was cold and the forecast was for bright sun all day long. But we had the date on the calendar, the best time to go fishing is when you can, and you certainly aren’t going to catch them if you don’t go.

So we did. I was fishing with Ryan White, a long-time guide on the Pere Marquette River. It started slowly and painfully enough; after every third or fourth cast we had to break the ice from the eyes on the fly rod. And by late morning, I hadn’t detected as much as a sniff.

But, finally, on one of the better-known holes of the flies-only water, I saw my indicator go down, shot the rod skyward, and became one with the fish. It bulldogged back and forth and though I could tell it wasn’t a giant, it never showed itself until I brought it upside the boat and steered it into White’s awaiting net.

It was a hen steelhead in the 5-pound range, a bright fish that White held briefly for a photo before sliding her back into the PM.

Indicator fishing — using a float up the line from the fly — is “the best presentation,” said White, who has 20 years of experience guiding the Pere Marquette.

“It covers the greatest amount of water. You can cover an entire hole with an indicator and it’s a lot better for a dead drift. You’re going right with the river current.”

It was one of three techniques we’d use to present flies and the only one that hooked us up with a fish.

“I think chuck and duck is the most effective presentation in the winter time when it’s really, really cold. A lot of people use it in the spring also, when the fish are on the gravel, but it does work well when it’s really cold. It gets right down to the floor right where they’re sitting.”

The downside to chucking and ducking is that it covers a limited amount of water, essentially, the amount of line you have out on the cast (or chuck), whereas with an indicator rig, you can keep shaking out line until you’re too far away to get a good hook set.

“With a chuck-and-duck rig you’re tight to your flies until it hits that 45-degree angle coming to the rod.” White explained. “Then your flies start coming back up to the surface. With an indicator rig you can match the flow of the river and extend your drift considerably.

White, 49, became a fishing guide almost by accident. A Michigan State grad who majored in wildlife management, White was unable to secure a full-time job in his chosen field (though he had plenty of short-term and contract gigs) and was working construction when a fishing-guide buddy of his asked if he’d help him out on a two-boat trip.

“I was hired because I had a boat and a pulse,” he recalled.

But he put his sports on fish that day, they were satisfied, and his buddy asked him if he’d do it again. He gradually transitioned into guiding full-time.

We fished with egg patterns, often with two flies, usually orange and chartreuse. When the water warms and the flies begin to get active, White will often pair an egg pattern with a nymph, but rarely abandons the egg. Trout and steelhead begin feeding on eggs when the salmon begin spawning and continue as the trout and steelhead spawn.

“It’s still the best food source,” White said. “Even when I go back to nymphs, most of our fish still come on egg flies.

“Egg color is real important sometimes, but on the other hand, steelhead seem to really like bright orange. And they love chartreuse. A lot of times I’ll throw two eggs and a real light tippet with a small egg on the end and sometimes it really picks up the brown trout.”

As the weather warmed in the afternoon, I picked up a streamer rod and fished it using both stripping and swinging techniques. I managed to move two brown trout (one of which was a dandy) while stripping the fly, but neither would commit — which is often an issue in really cold water.

When we had a long run, I’d strip the streamer from the bank out into the current, then let it swing downstream. It’s a popular technique with accomplished fly angers, who often use two-handed rods, but it works best where there are longer holes, mostly downstream from the flies-only water.

“You can swing a fly through any of our waters and if I’m going to swing for them I use really heavy sink tips to get the fly down quick,” White said.

We never hooked another fish.

“It’s straight up water temperature,” said White, who said his clients catch fish about 50 percent of the time in the winter. “Not every fish is going to be coerced into biting when you’re fishing super cold water. But at the same time I’ve gone out when it was freezing and we knocked them out stupid.”

We didn’t. But any day you catch a 5-pound rainbow on a fly is a good day, indeed.