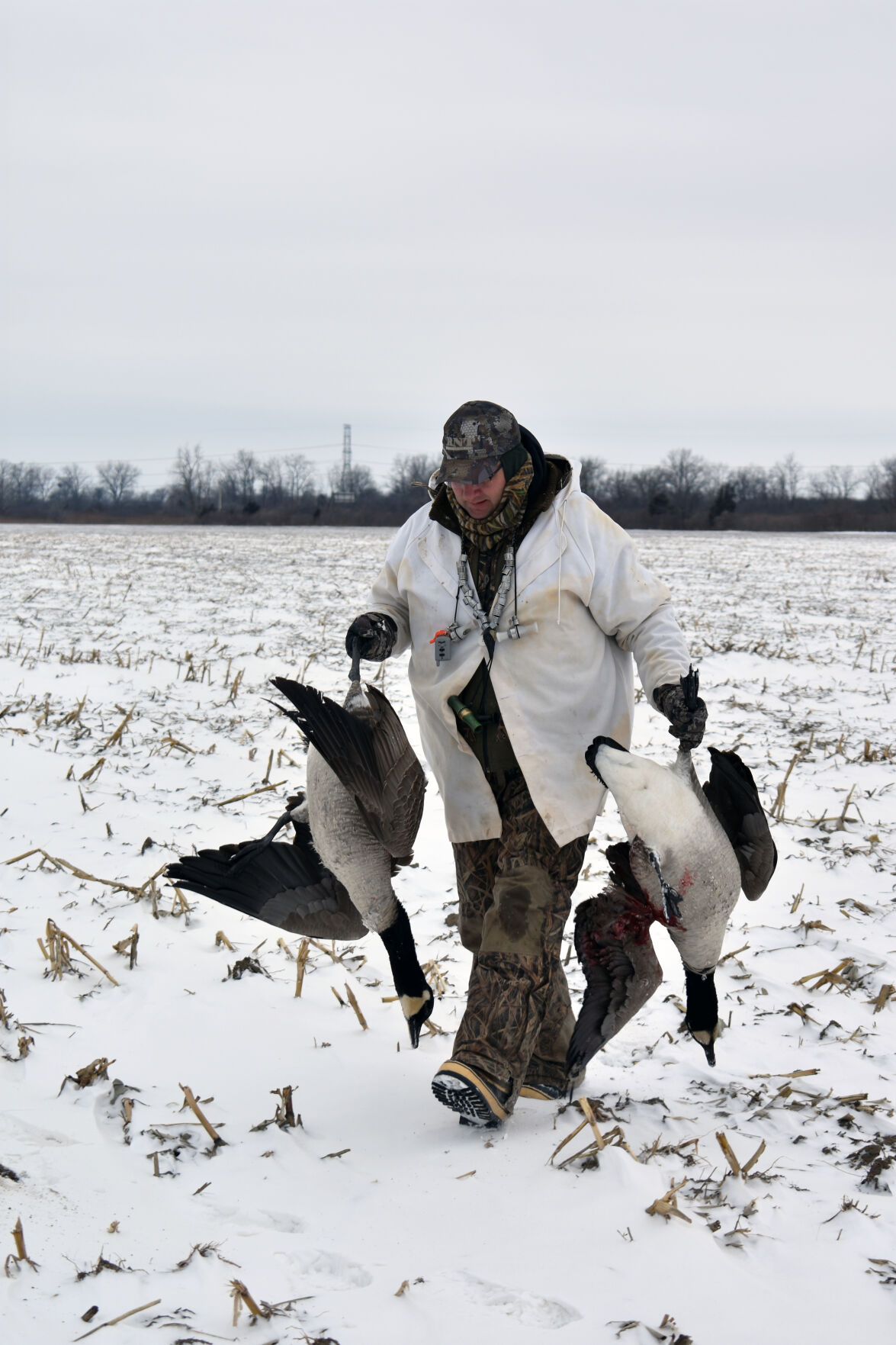 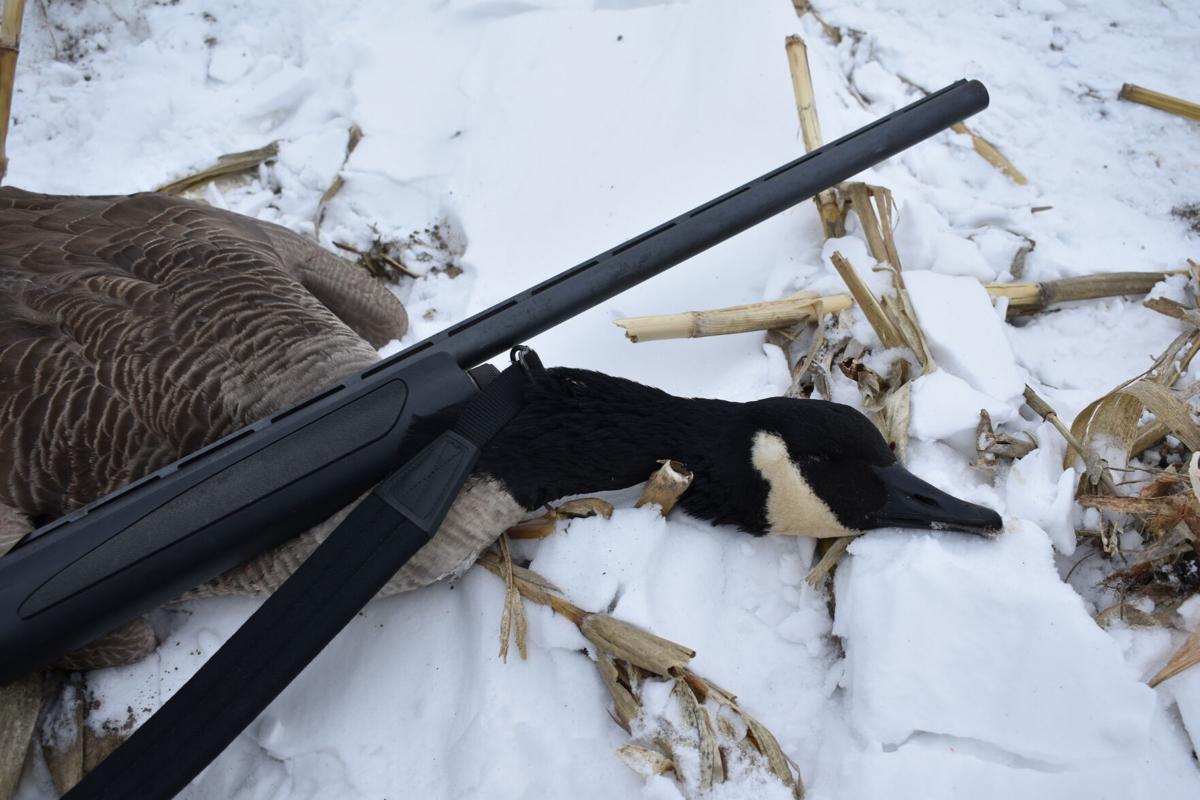 About 80 percent of Michigan's Canada goose harvest is made up of local giants.

About 80 percent of Michigan's Canada goose harvest is made up of local giants.

LUNA PIER — By the time I caught up with the rest of the guys in late morning, they’d been in the field for about four hours and they had two geese down.

Joe Robison, who was the ringleader, said they had a single come in to the decoys early and they killed it, then a small bunch made a fly-by and they managed to knock down one more.

“We should have had seven or eight, anyway,” Robison said.

We were in a pair of white A-frame blinds with some grass and corn stalks up against them in an otherwise cut corn field. It was the day after Christmas, the first of the two-day late-season split and Robison, who is a Department of Natural Resources wildlife biologist and one of the more hard-core waterfowl hunters I know, said he figured the birds would start working in mid-afternoon, during the warmest part of a cold, cold day.

There were plenty of birds in the air, but for the most part, they just flew by. Several times they were within marginal shooting range, but we held up, hoping they’d make that one more pass and commit. Didn’t happen. Finally, around 3 p.m., a small flock came close enough to give us a chance and we dropped five of them.

From then on it was close, but no cigar.

So we wound up having an OK day, but, if you’ve been waterfowl hunting for a number of decades, it would have been unbelievable not all that long ago.

“Back in the early ‘80s, if somebody shot a goose, people came from all over to see it,” Robison said. “It was not common.”

Indeed, back in the ‘70s, it was rare to see geese most places in Michigan, let along shoot them.

The birds that make up the bulk of the population now, are giant Canadas that were thought to be extinct. The DNR found some that a private farmer had in Minnesota, brought them here, raised them and released them, and gradually built the goose population we have now.

By the mid-1980s, there were enough local giants that the feds allowed Michigan to have a special late season to take advantage of the birds that rarely, if ever, left.

That’s when Michigan really became a goose hunting state. The feds allowed us a 10-day early September season and it got to where Michigan killed as many, if not more, Canada geese than any other state.

There was a mishmash of regulations; seasons were short and applied to small areas. But DNR research biologist David Luukkonen was able to document that many of the geese that returned with the SJB migrants were actually molt migrants; local one- and two-year-old giants that don’t breed, but for some reason migrate north in the spring. So we gradually phased out the 18-day season in the Saginaw Bay counties and now we have 107 days of Canada goose hunting that runs through early December, takes a break, and picks back up in later winter.

“You can hunt geese just about all the way from the first of September through the beginning of February,” Robison said. “Dr. Luukkonen deserves a lot of the credit.”

Robison said he had a tough goose season this year, in part because there were so many goose hunters.

But the extra hunting pressure took its toll.

“Goose hunting was tough all year, from the beginning to the end,” Robison said. “I’ve never seen as much hunting pressure as I have this year. It put the birds on alert and after a few days, they’d just go to the golf courses and parks and places where they weren’t getting shot at. They caught on real quick.”

Robison had scouted the field a couple of days before Christmas and there were a ton of geese and about 150 mallards using the field, he said. But the weather changed and so did the birds.

“We had a freeze up around Christmas and everything changed and it really redistributed the birds from the day I scouted, which was Wednesday. When they were showing up here, it was in the 40s and there wasn’t any snow. They were coming from a marsh and that froze up and they obviously moved somewhere else.”

Goose hunting picks up again on Jan. 23. In years past, the DNR re-opened the season around Jan. 1. But it has been pushed back to take advantage of the “February thaw,” when the giants that left the state start coming back. And hard-core goose hunters, who understand the dynamic, will be back after them as hard as ever.

“We’re usually in the top three states — Minnesota, Pennsylvania and Michigan — in terms of harvest,” Robison said, “and 80 percent of our harvest are local giants.”

That’s something the DNR can be justifiably proud about.