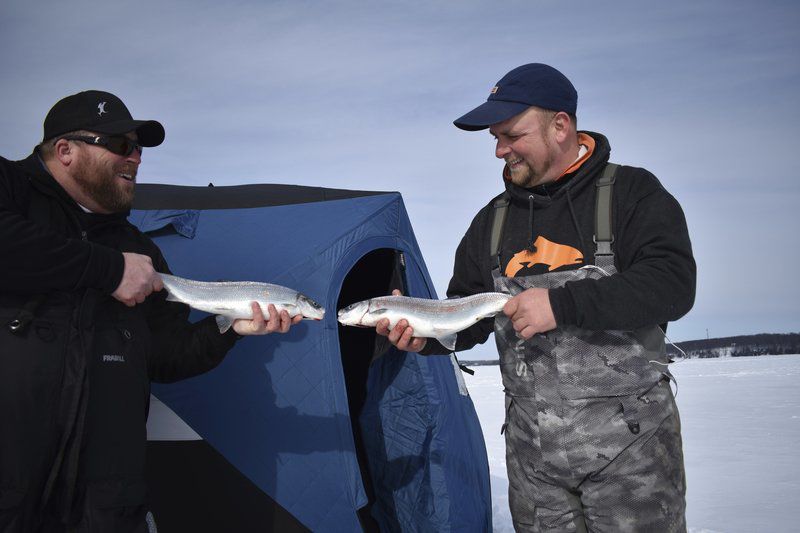 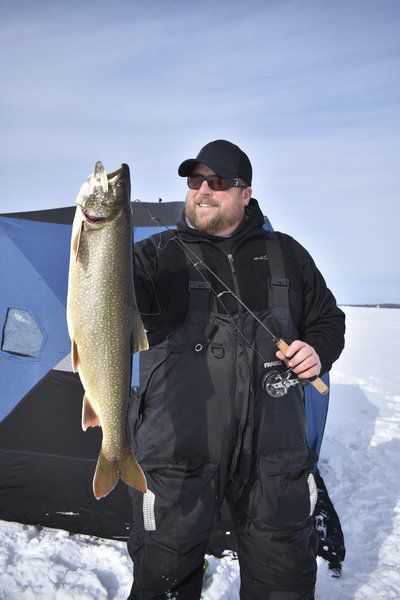 Chris Noffsinger holds up a lake trout taken on a spoon. 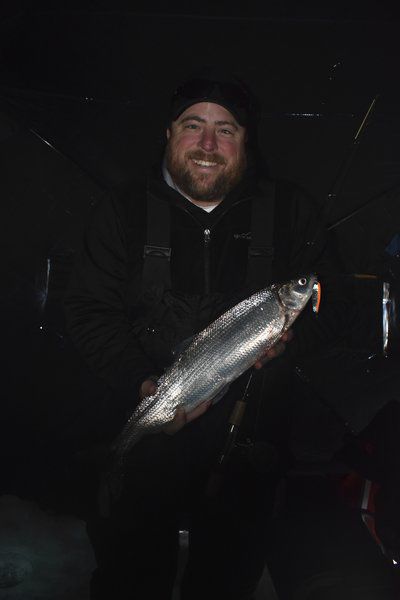 Chris Noffsinger shows off a cisco, taken in a dark shanty.

Chris Noffsinger holds up a lake trout taken on a spoon.

Chris Noffsinger shows off a cisco, taken in a dark shanty.

HORTON BAY — Start ticking off the species of fish that Michigan’s ice fishermen pursue and you’ll go through a dozen — maybe more — before you get to the critters Chris Noffsinger asked if I was interested in chasing: ciscoes.

Perhaps more commonly known as lake herring, ciscoes are members of the trout and salmon clan, cold-water denizens found in the Great Lakes and “two-story” — meaning they contain both warm-water and cold-water species — lakes. Of the same genus as lake whitefish (Coregonus), ciscoes are probably best-known to Michigan anglers in northern Lake Huron, where in the summer, they are pursued when the Hexes (giant mayflies) hatch. Anglers chase them with everything from cane poles to fly rods, but some fishermen — me, for instance — have caught them incidentally while pursuing other finsters, too.

Noffsinger, who is well-known as one of the best bass guides in the northwestern Lower Peninsula, said he’d teamed up recently with Jim Chamberlin (Fish with Jim Outfitters) to offer anglers ice fishing trips and though they fish for just about everything — perch, walleye, lake trout, you name it — in a handful of lakes, they’d been hammering the ciscoes lately.

So I found myself in a shanty in 106 feet of water, jigging a spoon just off bottom. The drill was simple — drop the spoon and jig it, usually with a snappy motion, watch the depth finder, and wait for the fish to show up. They move around a lot.

“They travel in everything from small groups to big schools, all throughout the water column, anywhere from the bottom to just 30 feet below the ice,” Noffsinger said.

When they arrive, you adjust the spoon’s depth until you’re in amongst them, and then try bringing them up — like walleye anglers do — to get them to go.

We were fishing with small jigging spoons, Michigan Stingers or Swedish Pimples, “but I’m sure you could drop a Castmaster or Hopkins down there and get them, too,” Noffsinger said. “They’re mostly eating alewives — baby alewives.”

It took a while until a few showed up on the screen, maybe 10 feet off bottom. Noffsinger hooked one immediately. Then I got bit, the line went slack, and I realized I’d been separated from my lure. The eight-pound fluorocarbon leader, attached to a braided line, broke off at the swivel. Must have been a bad knot.

Noffsinger iced his fish. I retied. And maybe 30 minutes later, more appeared, this time closer to bottom. Noffsinger hooked one and was bringing it up when something blasted my bait.

I figured it was a state-record cisco (currently 6.36 pounds) as it immediately took drag and continued for some time, never hinting at surrender.

“That’s not a cisco,” Noffsinger said.

Turned out he was right. It was a lake trout and a beauty.

“What do you think, six pounds?” I asked.

“I’d say eight,” Noffsinger said. “About every other trip you get one of those incidental fish — a laker or burbot.”

We called it in early afternoon, having iced six between us (and the laker.)

Meanwhile, Chamberlin, who was fishing with a buddy, and two other guys in another shanty he’d taken out right before we arrived, averaged six each, fishing just yards away.

“I’d say that roughly every other trip we catch a limit,” Noffsinger said.

Chamberlin agreed. “The other day I had two inexperienced anglers out there who caught their 12 each by noon,” he said.

“They’re super aggressive,” Noffsinger said. “When you see them on the graph you can usually get them to bite. They’re a fighting little fish, aren’t they?”

Indeed. Lake herring are like saddle broncs — all over the place. And they’re attractive, too.

“They almost look like a tarpon to me,” Noffsinger said. “Iridescent blueish/green with that white belly.”

These were fine specimens as well.

“I think every fish we caught today was a Master Angler (which is 16 inches or longer) fish,” Noffsinger said.

Ciscoes seem to be on the rise, population-wise, corresponding to the decline in alewives, which compete with them for food when they’re tiny. There appears to be no shortage; Chamberlin, says he catches about 1,000 ciscoes a summer while trolling for salmon.

As for table fare, well, they’re just like whitefish, which are about as popular a food fish in Michigan restaurants as there is. Noffsinger says they taste like a cross between a cod and a walleye; Chamberlin, who says he likes them deep-fried, said: “They taste just like walleyes.”

I oven-fried the pair I brought home. They were excellent.

As ice fishing outfitters, these guys have it together. They have large, comfortable shanties and take their parties out in a covered track vehicle. I’d recommend them.

You can find them on the internet at www.northernfishingadventures.com or www.fishingwithjimoutfitters.com.

Best bait for bluegills? You'd get about an even debate between wax worms and spikes among i…