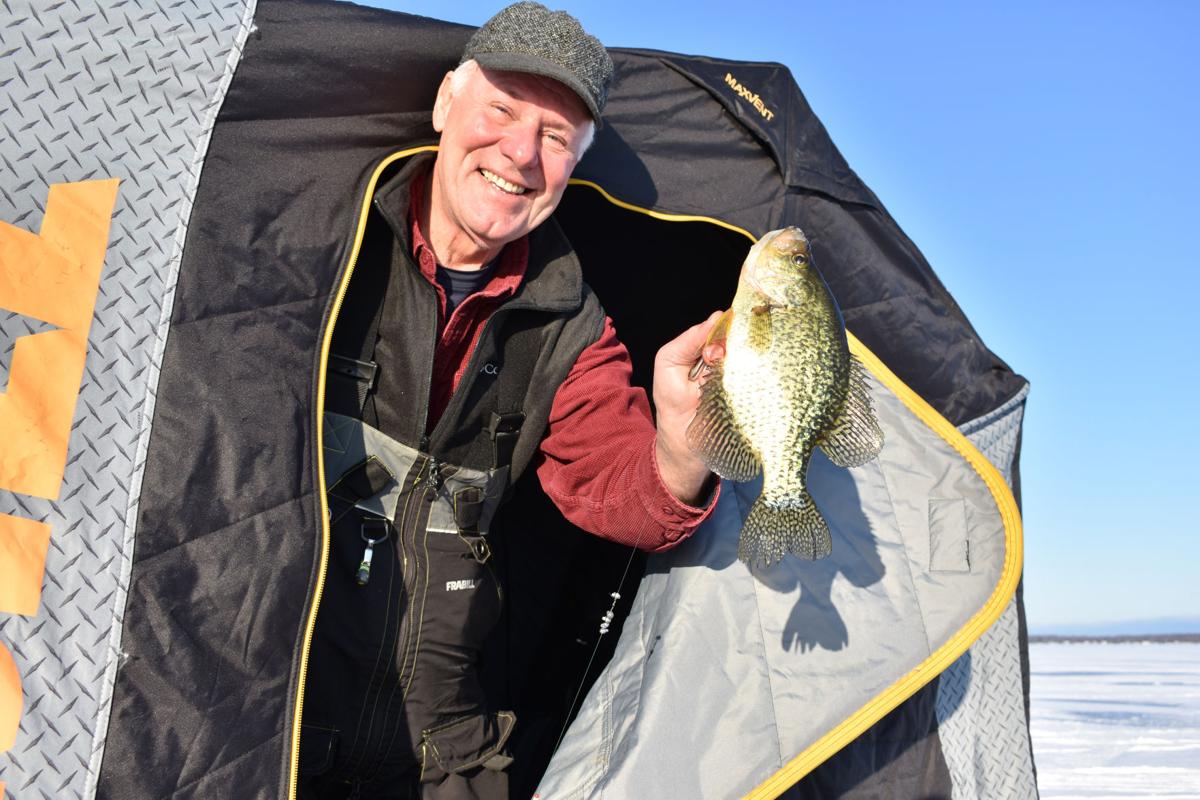 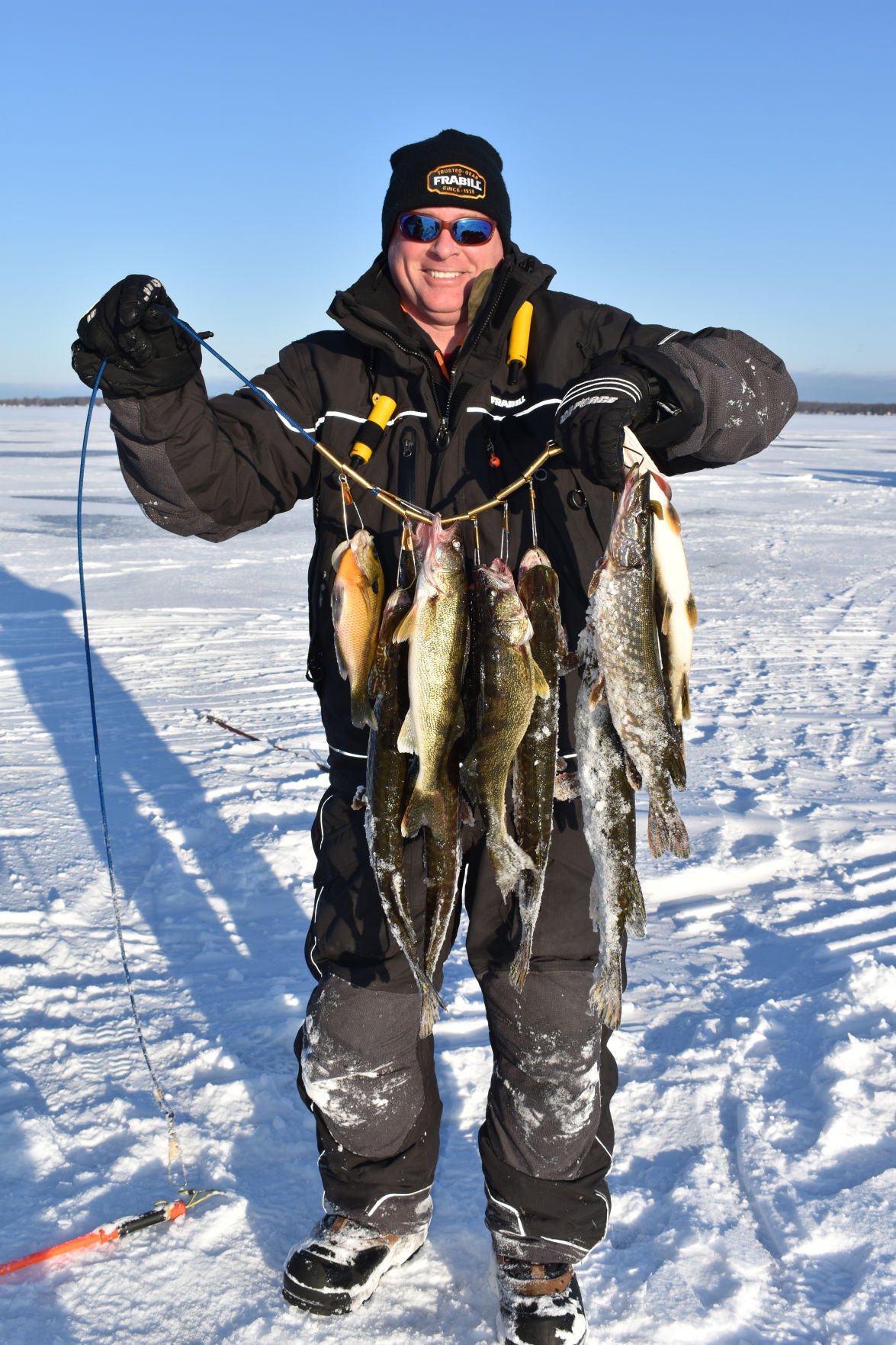 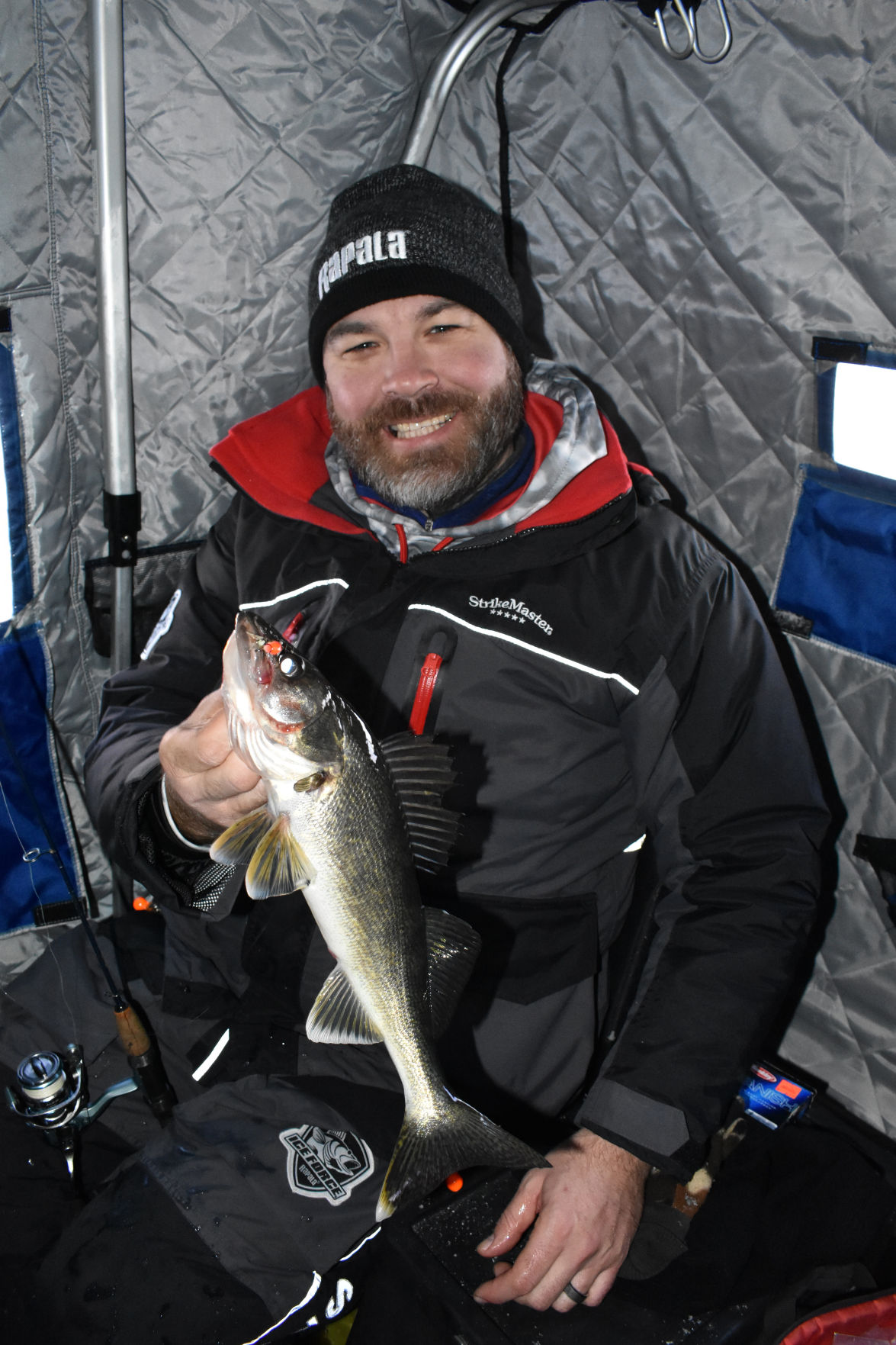 HOUGHTON LAKE — Tipping your spoon or jig with live bait is standard operating procedure for most ice fishermen chasing walleyes, but I’ve often wondered how necessary it is.

Guys who fish spoons in open water for walleyes, either trolling or vertical jigging over structure, don’t bother adding bait and the long-time standard for open-water, river jigging — a jig and minnow — has largely been replaced over the last couple of decades by jigs tipped with plastic trailer. From what I can tell, about 90 percent of river walleye jiggers have abandoned their minnow buckets.

Similarly, I used a Jigging Rapala a fair amount in open water this past fall, caught bass, walleye and yellow perch, and I never added bait.

So with those things in mind, I thought I’d try to see how significant bait is.

I was sharing a shanty with Chris Reinhold here in early January during one of Mark Martin’s winter events. We were on a spot Reinhold had found the previous day — in 12 feet of water on a small flat, just a few feet away from a 5-foot deep weed bed. I jigged with a small (say, no more than 3/4th inch long) Shiver Minnow, a Jigging Rapala-like lure, while Reinhold fished with a dead stick (a live minnow below a slip bobber). This has become SOP for walleye anglers sharing a shanty over the last couple of years — one guy jigs while the other guy dead sticks — or, if alone in a shanty, an angler typically jigs one rod and uses a dead stick.

It didn’t take long to find out if it would work. Twenty minutes into it, I iced a keeper ‘eye on the tiny horizontal jig. Thirty minutes later I caught a decent pike on the same bait.

It took a little longer for the next bite, but it was a better walleye. I had it up in the whole twice, but the second time it pulled free. Reinhold guessed it at 18-to-20 inches. We briefly discussed that if we’d have had a gaff, we would have had the walleye — small details often make a difference in how many fish you catch — when Reinhold noticed his slip bobber had disappeared. He quickly set the hook and brought a keeper ‘eye through the hole.

The fishing slowed — as it often does mid-day, but at noon, I caught another pike on the bait-less bait. Reinhold, who was also running a couple of tip-ups — which produced two pike — never caught another on the dead stick. So we both landed three; live bait did not seem to offer that much of an advantage.

Of course, any one day doesn’t prove a thing. Fact is, I’m a pretty firm believer that you can’t prove ANYTHING about fishing. And there’s one more caveat: Houghton Lake is so full of fish that I’m not sure that any of the usual “rules” apply.

I’ve been fishing Houghton Lake several days a year, both through the ice and during soft-water season, for decades and I’ve never had more than one or two disappointing days.

So what makes Houghton Lake tick? I asked Scott Heintzleman, the Department of Natural Resources fisheries biologist who oversees it and he suggested a couple of things. For one thing, it’s huge — 20,000 acres — has a maximum depth of 22 feet, and it averages eight feet in depth. That means virtually the entire lake is prime habitat for warm-water species.

“The lake has always had really good panfish populations, growing at or above statewide average,” Heintzleman said. “It has a good forage base of shiners and small fish and just the size of it and those drowned weed beds makes it productive. And it has gravel shoals for spawning habitat.”

Once known as perhaps the best pike lake in Michigan, Houghton has suffered spawning habitat loss to development, but that doesn’t seem to have impacted the numbers of pike. There are a ton of them in there; unfortunately they are mostly small, so much so that the DNR dropped the 24-inch length limit and two-pike creel and replaced it with no minimum size limit and a creel of five (but no more than one more than 24 inches).

“We changed the regulation to allow people to keep those smaller fish after several years of getting reports of people saying they caught nothing but smaller fish,” Heintzleman said. “It allows people to harvest some of those fish. Lots of people like to fish for them in the winter, and with tip ups, they wind up swallowing the hooks.”

The new regulation “doesn’t seem to have changed anything,” Heintzleman said. “For some reason they don’t seem to get very big.”

But they seem to be healthy; I took home three in the 20-inch range and, when I filleted then, two of them were sexually mature females.

But pike have taken a back seat to walleye in recent years; walleye fishing, once supported by stocking, is self-sustaining.

“Houghton Lake was a walleye lake pre-settlement,” Heintzleman said. “We discontinued stocking in 2011 and it’s been on its own since then. Literally the day we announced we weren’t going to stock anymore because we felt that natural reproduction was taking care of it, there were some people who said the walleye fishing his not what used to be. Except for an odd year here and there that is probably weather related, we see pretty good numbers of young-of-the-year almost every year.”

Houghton Lake was nuked with herbicide about two decades ago and the fishery plummeted. As a result, the lake association changed the way it treated the lake.

“The lesson learned was to treat some of the invasive weed beds and leave a lot of the stuff alone,” Heintzleman said. “There is some effort to restore the wild rice beds — that would be something that would be beneficial to all the fish. But it’s a big, busy, active lake and it’s hard to get everyone on the same page.

I fished one more morning on Houghton Lake, this time with a small Slender Spoon, tipped with a small minnow. I caught three perch (one was a dandy), a walleye, and a small (say, 15 inches) pike. If the minnows changed anything, it’s that I caught smaller fish.

While I had fair fishing, some of the guys on the lake whacked ‘em. And some didn’t.

That, of course, is fishing.

LA SALLE — After a night of full moon and a bright sun with no wind in the morning, Joe Robison was convinced the geese wouldn’t fly until the…