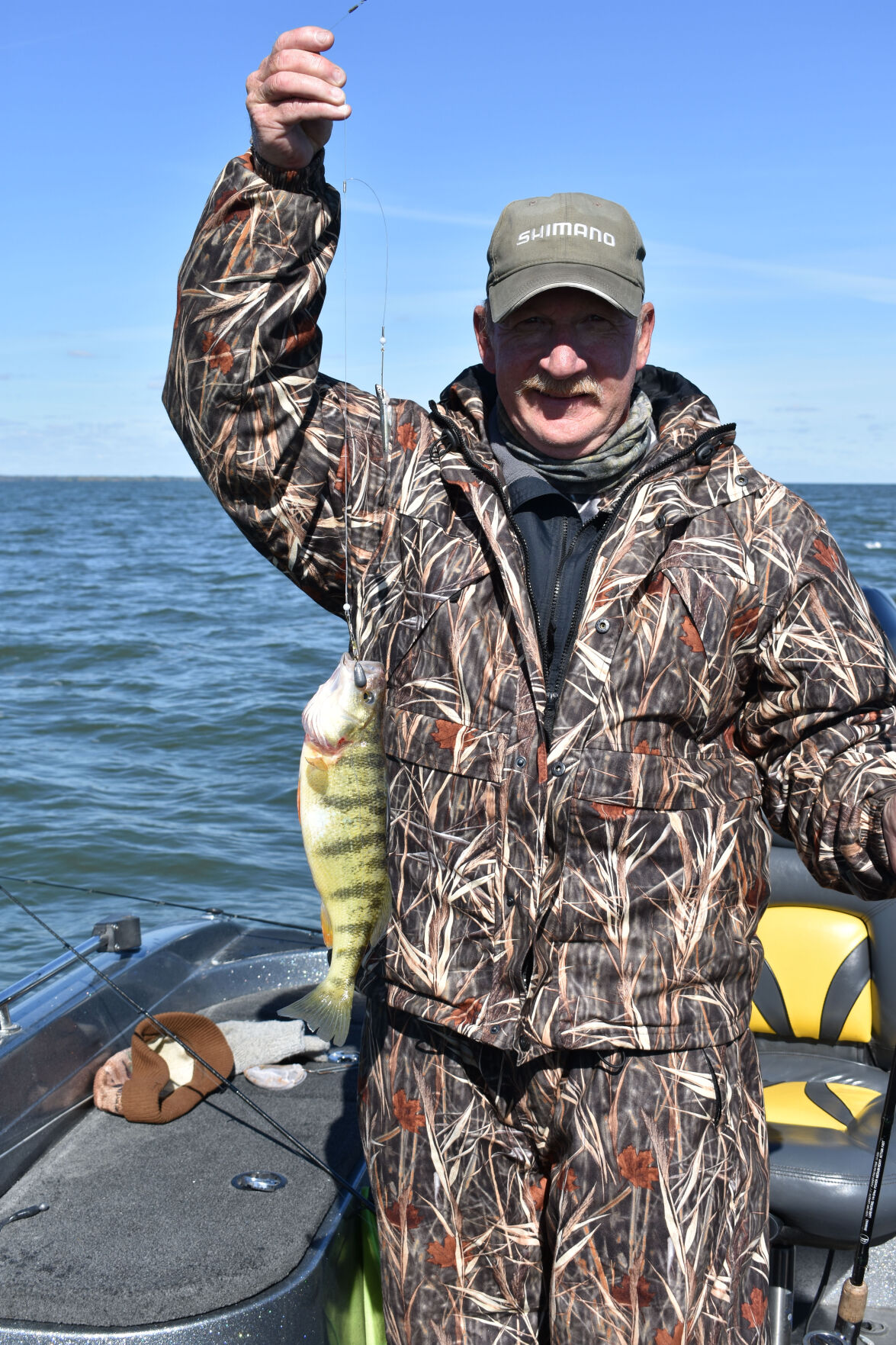 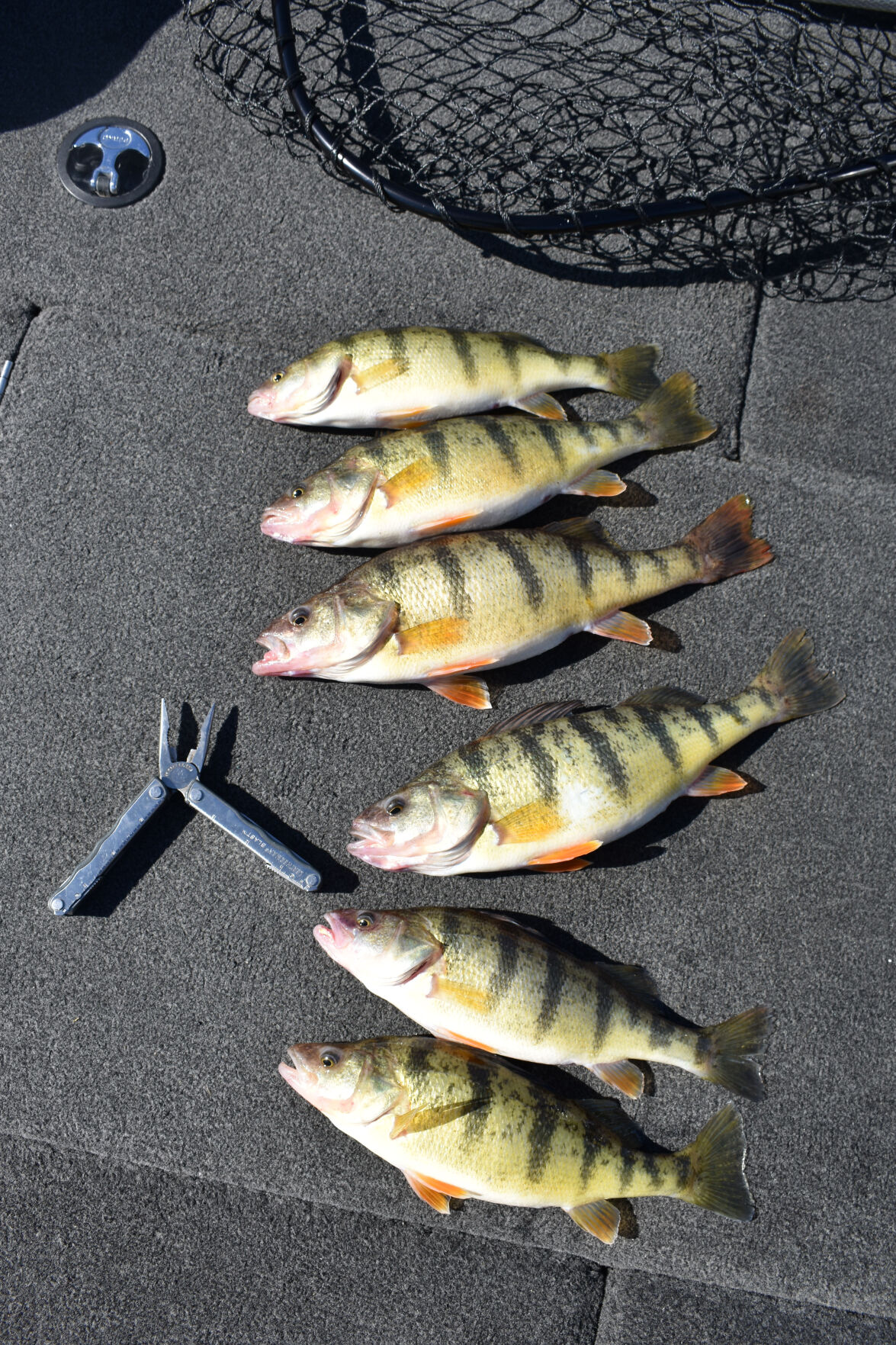 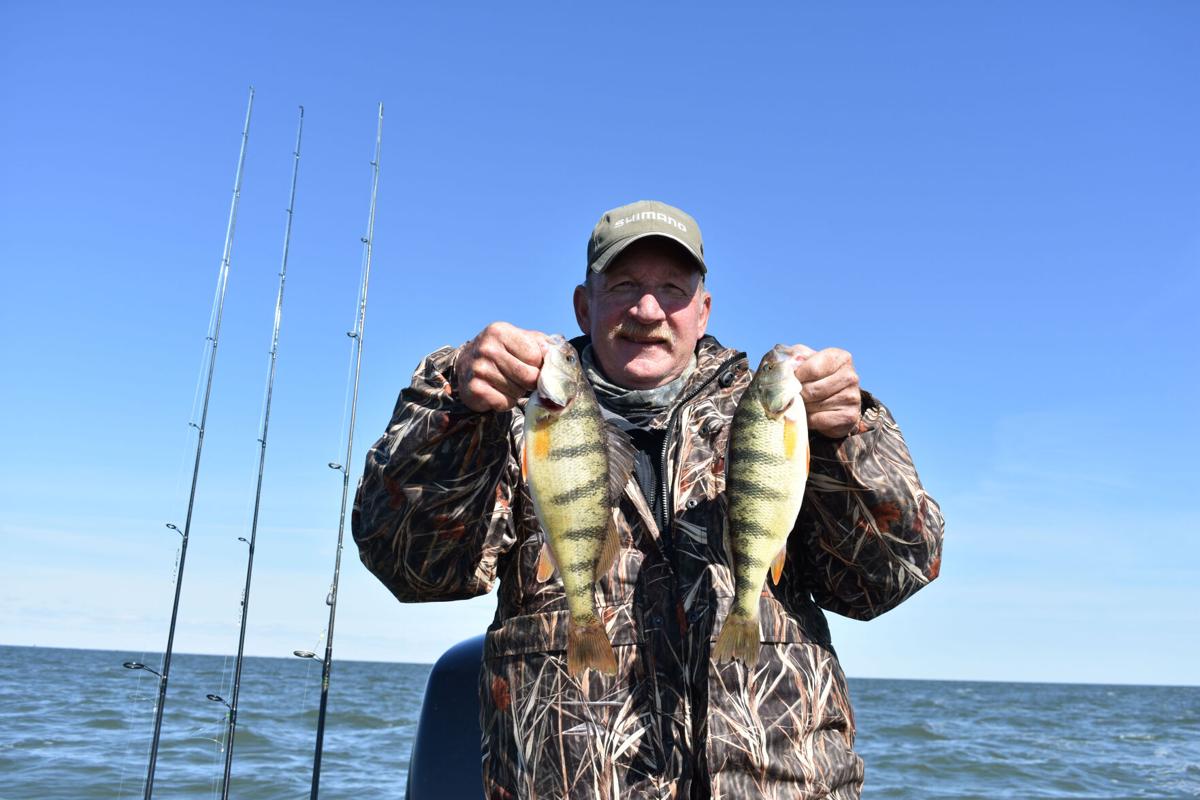 Bill Horton shows off a pair of jumbo perch.

Bill Horton shows off a pair of jumbo perch.

LINWOOD — The first thing Bill Horton mentioned when we stopped, a couple miles out in Saginaw Bay, was how brown the water looked.

“They had some five footers out here yesterday and it really did a number on the water,” he said. “It had been clear and green.”

We were looking for perch, something Horton has taken to fishing for recently as clients have requested. Reports have been good — there were a lot of boats out obviously doing the same thing — and Horton said he’d been catching fair numbers anywhere from 16 to 30 feet of water.

We started on one of his spots in about 17 feet, fished for a while, and caught two. The depth finder showed we were on fish, but we couldn’t get them to go.

So we moved, a mile or so, a little shallower — you can go for seemingly miles without noticing any depth changes in this part of the bay — set up and commenced. We caught two more, one of which looked like it would make a decent walleye minnow.

So we moved again. And again. After three hours we had six perch in the live well and had tossed back a few more dinks. I was about to suggest we give up on the perch and go bass fishing, when Horton said we’d try one more spot. He motored us to a place that had some bottom structure (which looked to me like it might be an old wreck or something) and started at it again.

“They’re just on isolated spots, on any kind of structure — weed beds, a rock pile, a hard bottom going into sand, even an isolated rock or boulder — some kind of structure to hold those fish,” Horton said. “But they do move; sometimes you pull upon a spot and you don’t catch them, but if you wait it out long enough, they’ll eventually be there.

“They go around in schools. Sometimes I think they just make a big loop. You catch a lot of small ones for a while and then you start catching bigger ones. I think they’re following schools of baitfish and when the baitfish move, you aren’t catching anything.”

We started catching them almost immediately. And what perch they were — 11-, 12-, 13-inchers. Horton pulled in one that we slapped on a measuring board that went 14 ¼ inches, the jumbo perch you always hear about but don’t often catch.

Even Horton, who’s been catching them pretty steadily for some weeks now, was surprised.

“I’ve never caught them that big until recently,” he said, “but nine- and 10-inchers are good ones. I’ve seen them bigger than that — inside the fish markets — and that was in the early ‘70s.

“Last year wasn’t like this at all. We didn’t have the run like we have. We had a lot of nine-inchers, but this year the perch are big. This year they have exploded size-wise — there’s a got to be reason. Something’s letting them make it now.”

That has been the issue with Saginaw Bay perch for a number of years. Research biologists say they are reproducing, but they aren’t making it to adult sizes. That’s part of the reasoning behind changing the walleye regs — letting anglers keep more and smaller walleyes in the last couple of years — to see if thinning out the predators will help the perch flourish.

But despite our catch — we wound up quitting with 22 in the live well and tossed back a handful of dinks — the Department of Natural Resources says there’s no evidence it’s working. Survey data shows perch numbers remain suppressed.

“Numbers are way, way down from the heydays,” said Jeff Jolly, the DNR fisheries biologist for Saginaw Bay. “I’ve seen days — and I’m sure you have, too — when the stars are aligned, when you can catch them one after another. But we don’t have anything to show that it’s not down. There’s no big recovery coming.”

Perch that are heavily predated, Jolly said, tend to mature sooner and reproduces at smaller sizes.

“We’re finding age one and two perch that are sexually mature,” Jolly said. “That’s something we’ve not seen before.”

Jolly said that the changes in the environment — zebra mussels clearing the water, for instance — favor the sight-feeding predators, which Saginaw Bay is full of. The big perch we were catching were a matter of those fish — that do escape predation — having more food with less competition.

“Most get eaten,” Jolly said, “so the ones that make it get to be pretty good size.”

We were fishing with fairly large minnows (emerald shiners) on two-hook rigs with a half-ounce sinker. And though we caught them steadily — Horton relocated the boat around the structure element when the bite slowed — it was never rat-a-tat-tat. At no point did we catch two on the same rod and never did we have two rods (we fished four rods total) go at the same time. It wasn’t like we were on a huge school of fish, but there were enough — and they were big enough — to keep our attention.

And others, too. Horton said he’d made about a dozen perch safaris with his clients this year and he expects that demand to continue as the word spreads.

“A lot of people love them,” he said. “They want something to eat.”