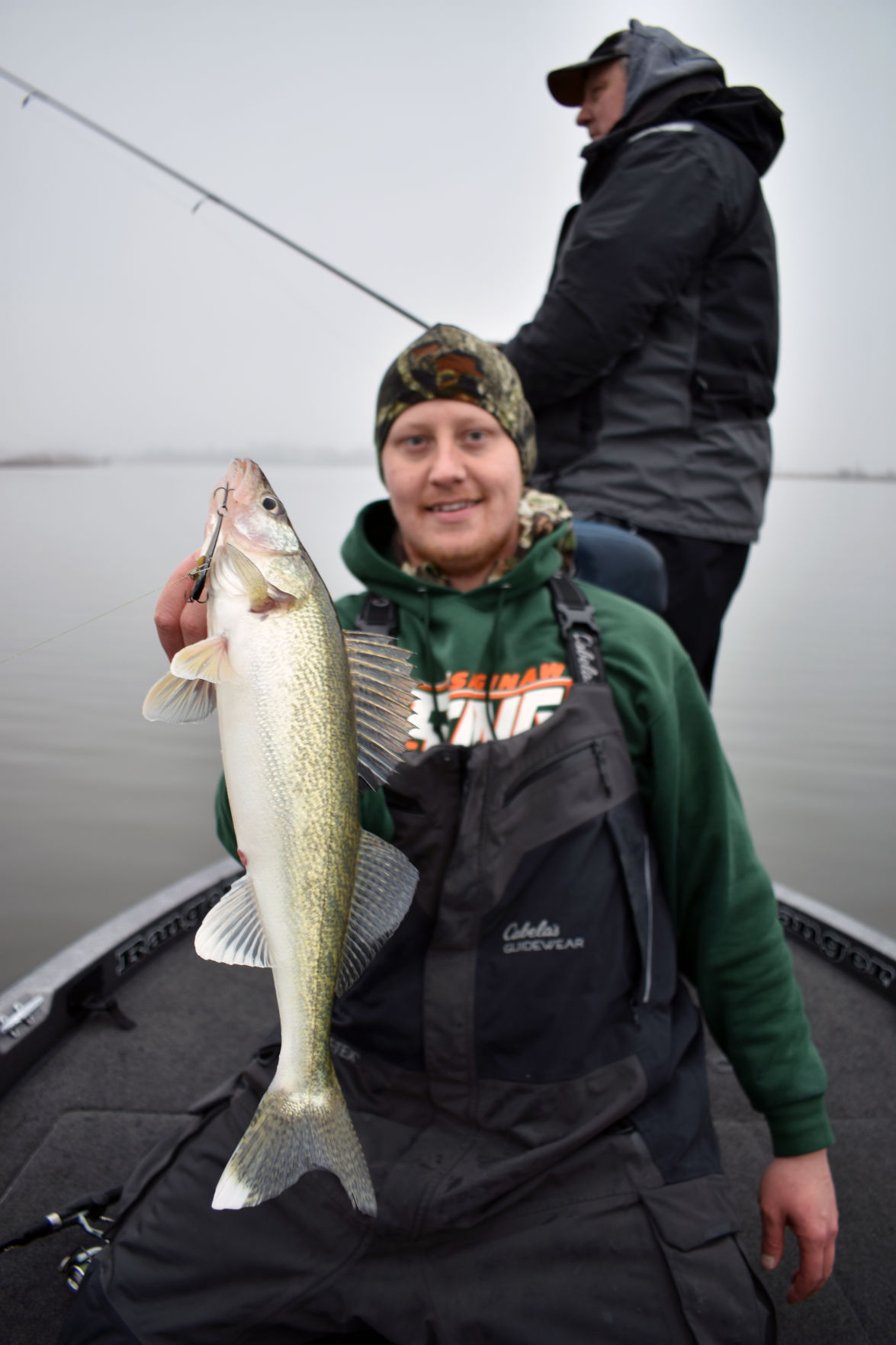 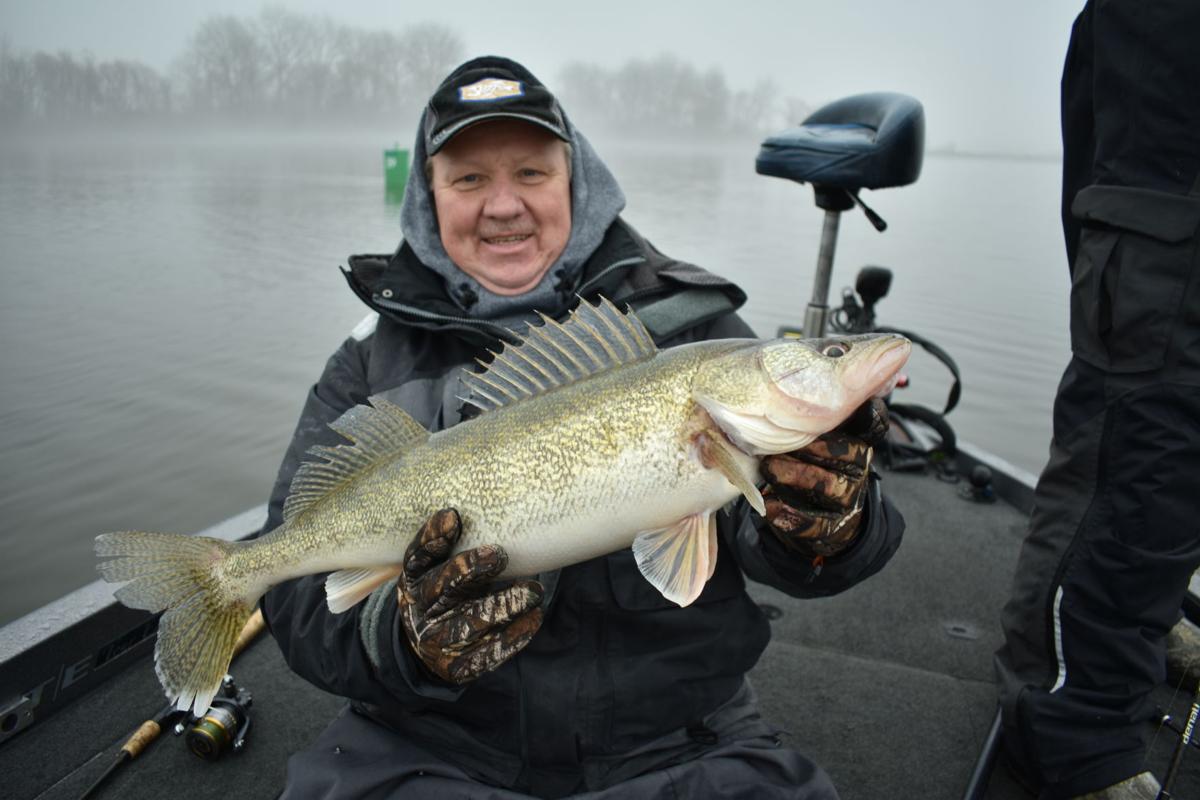 BAY CITY — We’d waited until up in the afternoon, when most (but certainly not all) of the rain had passed to get started, so we only had a few hours before dark to get it done. But Greg Sochocki said, not to worry, we would.

We were on the Saginaw River, which fills up with walleyes in late fall and early winter, and they were here in spades. But they were also running small, which has been an ongoing theme for years now, so much so that the Department of Natural Resources cut the minimum size limit by 2 inches and raised the daily creel limit from five to eight to help thin them out.

We started catching them right away, but not as quickly as is often the case. The typical jig-and-plastic-trailer approach wasn’t what they wanted, so we switched to blade baits or rattle baits or jigging Rapalas and the bite picked up significantly. We had the boat out in about 30 feet of water, fishing the edges of the channel.

“It’s the time of year when they congregate in the deep holes and are staging for the spring spawn,” Sochocki said. “They’re in here thick. It’s just a matter of finding an active pod of better fish.”

Indeed we probably had six or eight in the boat before we caught a keeper. Greg’s son Jamie, who was the first to switch to a blade bait, scored the first and then over the course of the next couple of hours we put 17 in the live well — 14- to 16-inch fish — though Greg nailed a beaut (I guessed it at 6 or 7 pounds) that he released as soon we photographed it.

“I’ve been fishing them for quite a few years now,” Sochocki Sr., said. “It’s a good cold-water bait. It gets down to the bottom quickly, is easy to fish, and you can cover a lot of water quickly, as long as you have a clean bottom. If you don’t, you’re not going to have a lure very long.”

I’ve been fishing the Saginaw River with Greg for 30 years (and with Jamie a few less) and it seems like there are more and more walleyes all the time.

Greg, who had been fishing the river for about five years before I met him, agrees.

“I think there’s more fish now,” he said. “There were more big fish back then. The average fish was 3 or 4 pounds and it was nothing to catch seven, eight, nine, 10-pounders. We used to slam those big fish.”

He remembers how he got started back in the mid ‘80s.

“It was an October day — I went pheasant hunting that day, an absolutely gorgeous day, 75 degrees — and I didn’t do very well, but I had a friend who told me he’d been catching them and I should give it a try. So I hooked up the boat and put in. And I smoked them that day. It was like every cast. And I was the only one on the river – I had it all to myself.”

The trip I made with the Sochockies (Is that you pluralize Sochocki?) was Greg’s fourth of the season and he’s caught them pretty well every time, he said.

“We had one day when he caught 10 fish and all were in the 4-to-5 pound range,” he said. “The second time it was a little slower, but we did catch them. They were smaller fish. The last time out, a couple of days ago, we caught about 60 to keep our 16.

“But by the last hour the better fish turned on for us. We were catching them fast. I was jigging with two rod and getting doubles, but that last hour we were catching all, 14-, 15-, 16-inch fish.”

For his part Jamie, said he’s had similar results this fall. He fished a walleye tournament earlier in the fall that took more than 30 pounds to win, he said. That’s strong.

Greg said the last time he was out, he could see the fish rising up off the bottom on his sonar during the last hour of light, and that corresponded to the bigger, better bite.

We were hoping for a similar situation (of course) but two things happened that put a damper on it.

First the wind switched directions and the bite slowed down, which isn’t all that unusual.

But then a fog that would have made an April day in London proud rolled in. It got dark fast; we’d covered a fair amount of river, and there were no lights at the ramp where we launched. We had to get out of there.

Sochocki motored us back at a fast idle and about half way back he pointed to his graph. The fish were rising up off the bottom. It probably would have been a good bite.

But we had nothing to complain about; we caught three or four under-sized eyes for every keeper (and truth be told, we likely tossed back some 13 inchers, too) on a dismal, drizzly day. You’ve got to play with pain.

The bite on the Saginaw River typically lasts through winter until the season closes on March 15, though there will periods when the ice isn’t safe.

But when the season re-opens the last Saturday in April, there should still be a lot of fish on the bite.