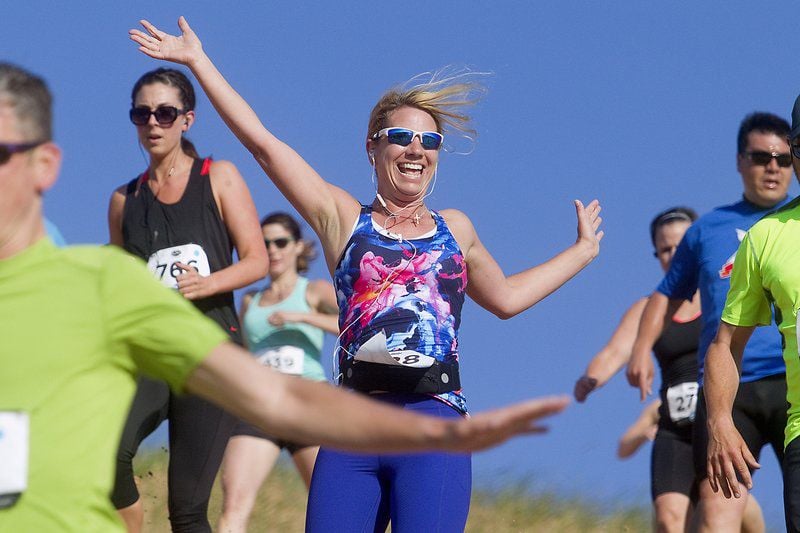 Tami Schroeder throws her arms in the air as she runs down the dune during the 2017 M22 Challenge Triathalon at Glen Lake. 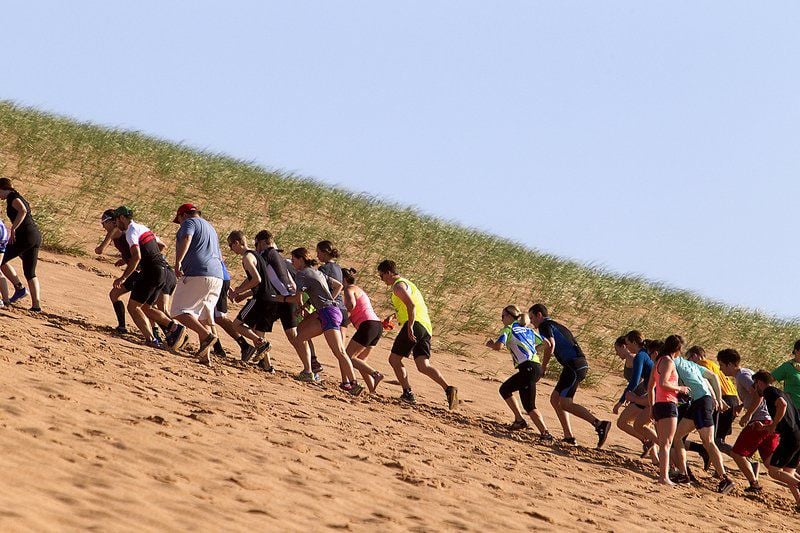 People climb a dune in the M22 Challenge.

Tami Schroeder throws her arms in the air as she runs down the dune during the 2017 M22 Challenge Triathalon at Glen Lake.

People climb a dune in the M22 Challenge.

TRAVERSE CITY — Athletes in this weekend's M22 Challenge will race up sandy dunes, climb long hills on bikes and paddle a windswept lake.

They'll also have the chance to flex their political muscles.

The event teamed up for the first time with FLOW, For the Love of Water, whose volunteers will have petitions available calling for the shutdown and decommissioning of Enbridge's Line 5 oil pipeline, which runs along the bottom of the Straits of Mackinac.

There's also a pollution-preventing ban on water bottles and swag bags, and the nonprofit advocacy group will encourage the Great Lakes' health and endurance alongside the race's physical test.

"We're really excited," said Liz Kirkwood, FLOW's executive director. "We think its it a wonderful opportunity for people to not only enjoy the Great Lakes, but also learn about the specific ways in which their actions can matter to sustain them."

The M22 Challenge, now in its ninth year, sends 900 triathletes 2.5 miles up the Dune Climb at Sleeping Bear Dunes National Park, on a 17-mile bike ride, then a paddle across Little Glen Lake. The race is Saturday starting at 8 a.m.

The event is put on by the M22 brand retailer, founded by brothers Keegan and Matt Myers. The Myers grew up on Old Mission Peninsula's Neahtawanta, not far from FLOW founder Jim Olson, Keegan said.

"We've known Jim Olson our whole life — since we were babies," Keegan said. "We looked up to him and his stance on the bottled water industry, and overall how much he knows about the Great Lakes."

They wanted to work together from the beginning, but FLOW's growth and their own made now the right time to partner up, Keegan said. M22 Glen Arbor will donate 10 percent of sales Friday from 3-7 p.m. to FLOW and will use the race to increase the organization's visibility.

"Our interests definitely goes hand in hand ... if we didn't have the lakes, things would go very bad for us," Keegan said. "Our main thing is that people understand the concept of the public trust — that all citizens have ownership of these resources. Private companies do not have control, and we can't just look at it short term."

Growth has also come to the M22 Challenge, which has morphed from 130-racer affair to a destination race that sold out its 900-person cap in three minutes this year.

"It's such a unique race — it's the largest paddle triathlon in the nation," Keegan said.

The paddle, and the large space needed to accommodate 900 kayaks at the transition self regulates the M22 Challenge's size, he added.