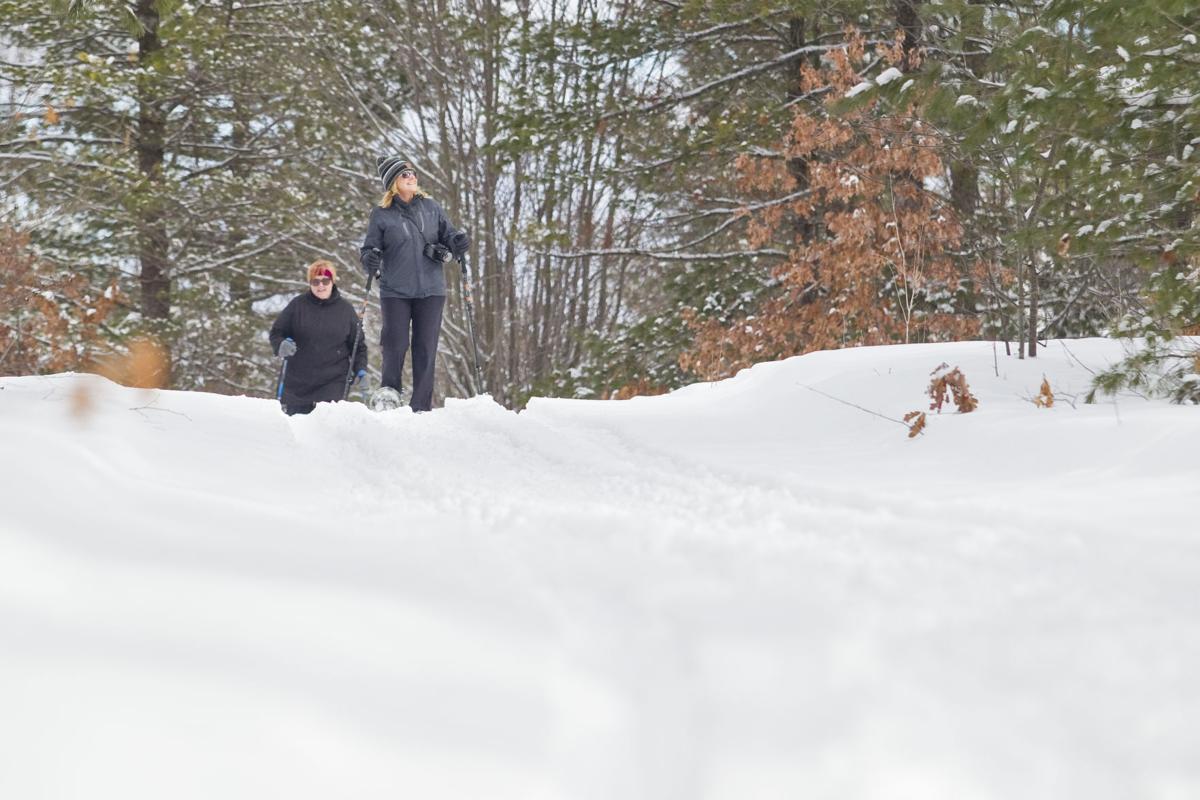 Janeen Wardie looks up at the sun in the trees as she and a friend snowshoe on the North Country Trail outside of Kalkaska last winter. The trail runs from Kalkaska to Traverse City. 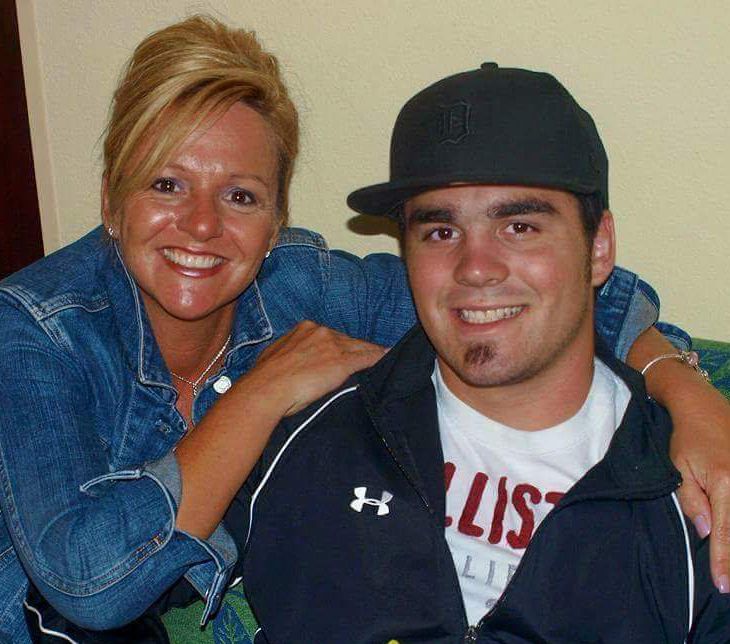 Janeen Wardie (left) and her late son Zechariah. Zechariah died by suicide nearly four years ago, and Wardie has been instrumental in the organization of the Out of the Darkness community walk in Traverse City. 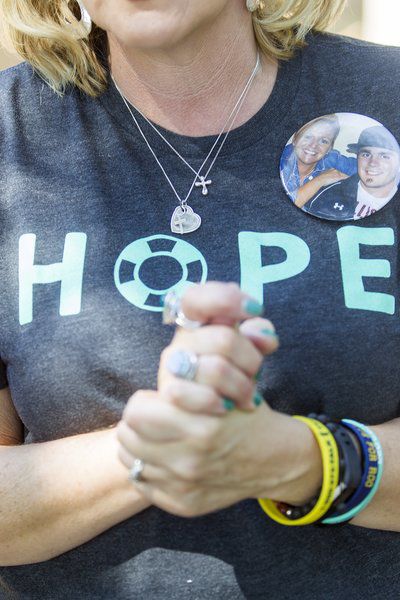 Janeen Wardie looks up at the sun in the trees as she and a friend snowshoe on the North Country Trail outside of Kalkaska last winter. The trail runs from Kalkaska to Traverse City.

Janeen Wardie (left) and her late son Zechariah. Zechariah died by suicide nearly four years ago, and Wardie has been instrumental in the organization of the Out of the Darkness community walk in Traverse City.

He hid the darkness of his severe depression, Wardie said, and since losing him, she has tried to shine the light on mental illness and suicide.

“Up to 80 percent of people who are considering suicide signal their intentions, hoping for help, but we often ignore or miss or dismiss their messages,” she said. “We need to work to normalize conversations about mental health.”

Nationally, suicide is the 10th leading cause of death overall and the second leading cause for ages 10-34. The Centers for Disease Control and Prevention estimate one suicide death every 11 minutes.

The pandemic heightened this risk because of conditions of isolation and economic insecurity, and an increase in substance abuse and gun sales, said Stacey Kaminski, Northern Lakes Community Mental Health operations manager for crisis services in six northern Michigan counties.

Statistics about suicide, however, are easier to find than conversations.

Allison Zimpfer, a contract worker with Child and Family Services in Traverse City, trains suicide social services workers and the general public on suicide awareness and prevention that focuses on principles of “Question, Partner/Persuade, Refer,” or QPR, to directly confront someone.

“I want to dispel the myth that you must be an expert to ask people if they’re thinking about suicide and be able to respond,” she said.

“If a person perceives himself to be a burden to others or experiences a lack of belonging, QPR sees these as warning signs that the person might be considering suicide. Other signs include people putting their affairs in order or giving away possessions. Situational risks include access to firearms,” Zimpfer said.

There are things an ordinary citizen can do, she added.

“Risk asking someone if they’re thinking of suicide,” she said. “Their safety is more important than our discomfort. And if someone is willing to talk about it, open up a space to listen.”

She urges the listener to be non-judgmental, avoiding guilt or coercion.

“And it is important, as appropriate to partner with others — parents, friends, service providers — to ensure that the individual has needed support.”

It’s also important to offer resources, such as the National Suicide Hotline, text line and Northern Lakes Community Mental Health Crisis Line. If the situation is urgent, a hospital emergency room might be necessary.

“Every call is serious,” Kaminski said. “If it’s about suicide, we’ll ask, ‘Do you have a plan? Have you considered this in the past? Is someone with you? Can someone bring you in?’ And we may also do a welfare check.”

“First, we will be able to divert individuals from the hospital or jail and second, our clinicians will complete initial assessments which will open individuals to services as needed,” Stevenson said.

She emphasized that the center will serve individuals across the lifespan.

“Multiple funding sources will be required,” she said.

Currently, Stevenson is gathering input from community stakeholders, including human services, law enforcement, the courts, hospitals, mental health organizations and many others.

“The crisis center is a much-needed service and I am excited to see it come together.”

Meanwhile, Kaminski keeps the NLCMH Crisis Line available 24/7 with a reminder that suicide affects all populations regardless of age, gender, education and occupation.

“People who call are asking for help and we will respond in person as needed. It’s an honor to help them in one of the worst moments of their lives.”

“I believe talking about it helps me and helps others,” she said. “If I stay in the tragedy, I’m not helping anyone. I want to be visible as a survivor.”

When her daughter Jody took her life at age 26, Payne said, “it came out of the blue. We were shattered. The whole community was.”

Looking back, she can see signals that were missed.

“When she didn’t come home for Christmas, it was a red flag. And she was drinking a lot.”

“She became involved with a cult in California when she was 19,” Payne said.“The indoctrination and abuse she experienced were very damaging, but she thought it was an opportunity to serve God. After eight years, she tried to move beyond that experience but never really did and struggled with depression for a long time.”

Payne survived these devastating losses through faith, family, friends and her own resilience.

“I believe that everything is one,” she says, “My daughters and I are still very much connected.”

And she has refused to be a victim.

“The pain doesn’t go away but I feel more compassion for others like Jenny who are suffering.”

Because mental illness often plays a role in suicide, Judy Barrett of the National Alliance on Mental Illness — Grand Traverse, is pro-active about education, advocacy and support.

“Twenty percent of human brains are affected by mental illness, all the way from depression and anxiety to schizophrenia,” Barrett said. NAMI-GT offers weekly support groups for adults living with mental illness.

A new NAMI-GT educational initiative is a suicide prevention program for schools and churches called “Ending the Silence.” Doctors and professionals are creating the curriculum.

“We need to teach kids how to recognize mental illness,” Barrett said. “We’re also working with emergency care workers to improve communication with people who have mental illness.”

NAMI-GT board member Rick Coates suffered from anxiety disorder most of his life and finally found help through medication and talking with others who understand mental illness.

“Hiding doesn’t help,” he said. “People get into treatment through relationships.”

Military veterans are also vulnerable to suicide and, when national research showed that 22 vets were taking their lives every day, an organization was created called “22 2 None.”

“We started in 2016 with a few vets getting together,” said Ray McDaniel, the northern Michigan nonprofit’s president. “It helps because we speak the same language.”

When veterans leave active duty, they often lack a sense of purpose and may need help processing trauma.

“They ask, what’s my mission now?” McDaniel said. “The military makes that clear every day.”

The local 22 2 None group created a mission for itself when it purchased the former South Boardman Elementary School, which they are converting to transitional housing and an outreach center. They also hold weekly “Morale, Welfare, Recreation” get-togethers, he said.

Mathew Cooke’s college fraternity Big Brother Julian was a Marine veteran. Julian had shared stories about the trauma he had experienced while deployed in overseas but Cooke didn’t see it as a sign of distress until Julian died by suicide in 2010.

“I didn’t know how to handle it,” Cooke said. “He seemed like the strongest person in the world.”

Four years later, Cooke lost a second fraternity brother to suicide. He understood the situation a little better, and instead of trying to escape the pain through alcohol, began attending suicide awareness walks and counseling.

“I learned how many people are affected by suicide,” he said, “and how it helps to talk about it.”

Cooke moved to Traverse City several years ago and in 2018 got involved with an organization called “Hope Lives in Northern Michigan,” started by Wardie to honor her son, Zech.

“We support local nonprofits that are doing work in the areas of mental health and suicide awareness, prevention, intervention and aftercare grief support,” Wardie said. “We’re out there at events, talking to people, sharing resources. This work keep Zech’s light shining.”

When someone loses a loved one through suicide, the grief is complicated and prolonged because survivors are left with many questions, like “why did this happen?” and “what did I miss?”

Michael’s Place in Traverse City has a support group for those who are dealing with a suicide death, facilitated by Samantha Comai, who brings her own experience to the circle.

In the group, her goal is to create a safe, comfortable space to engage.

“People can participate as much or little as they wish,” she said.

Melissa Fournier, a private practice counselor on grief and loss, confirms the complexity of grief after a suicide death. Well-meaning people may offer “premature consolation” to the bereaved by saying, “it’s not your fault.” But what people really need is to be accompanied into the dark places of guilt and grief, without judgment, Fournier said.

“The path to healing and wholeness comes with mercy for the self.”

Mercy enough for the loved one who has died and for those who are left behind.

Karen Anderson is a writer who lives in Traverse City. She contributes a weekly essay to Interlochen Public Radio and a collection of her essays, “Gradual Clearing,” was published in 2017.