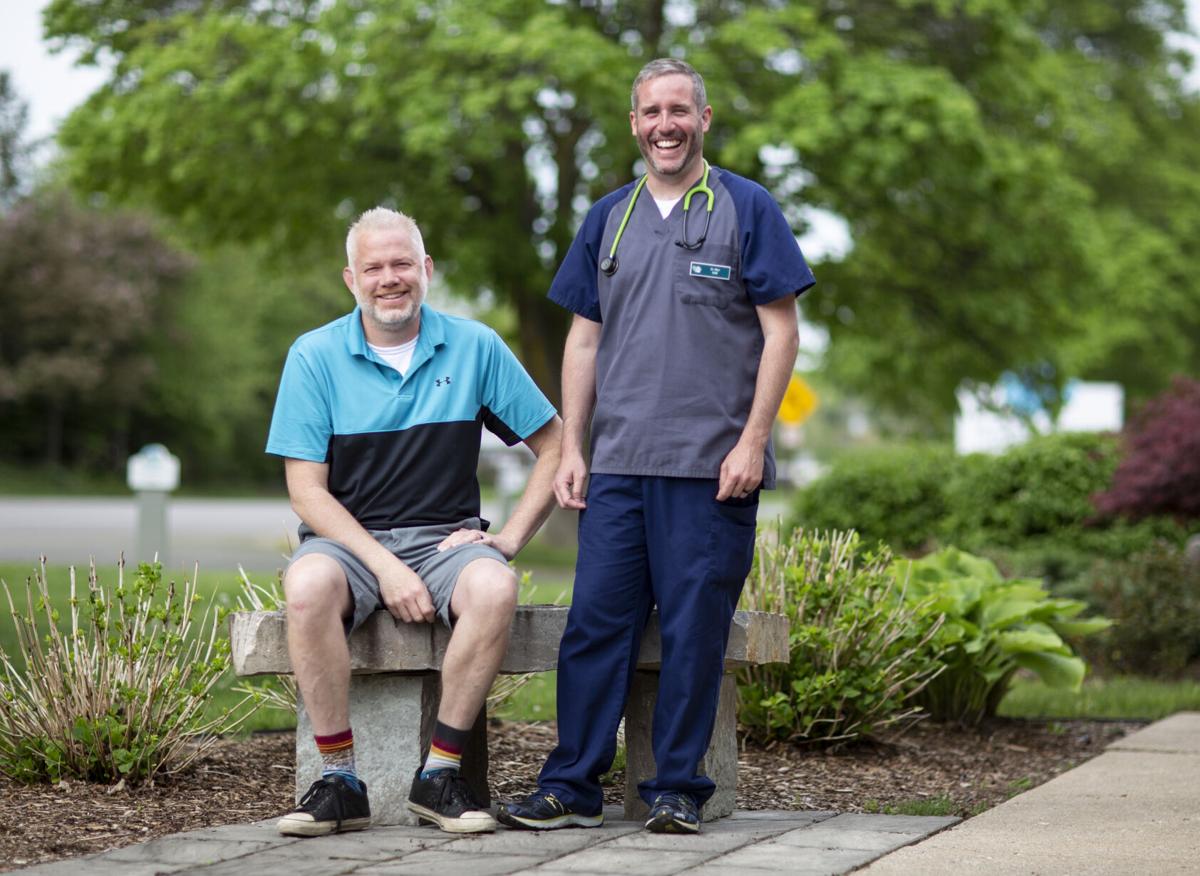 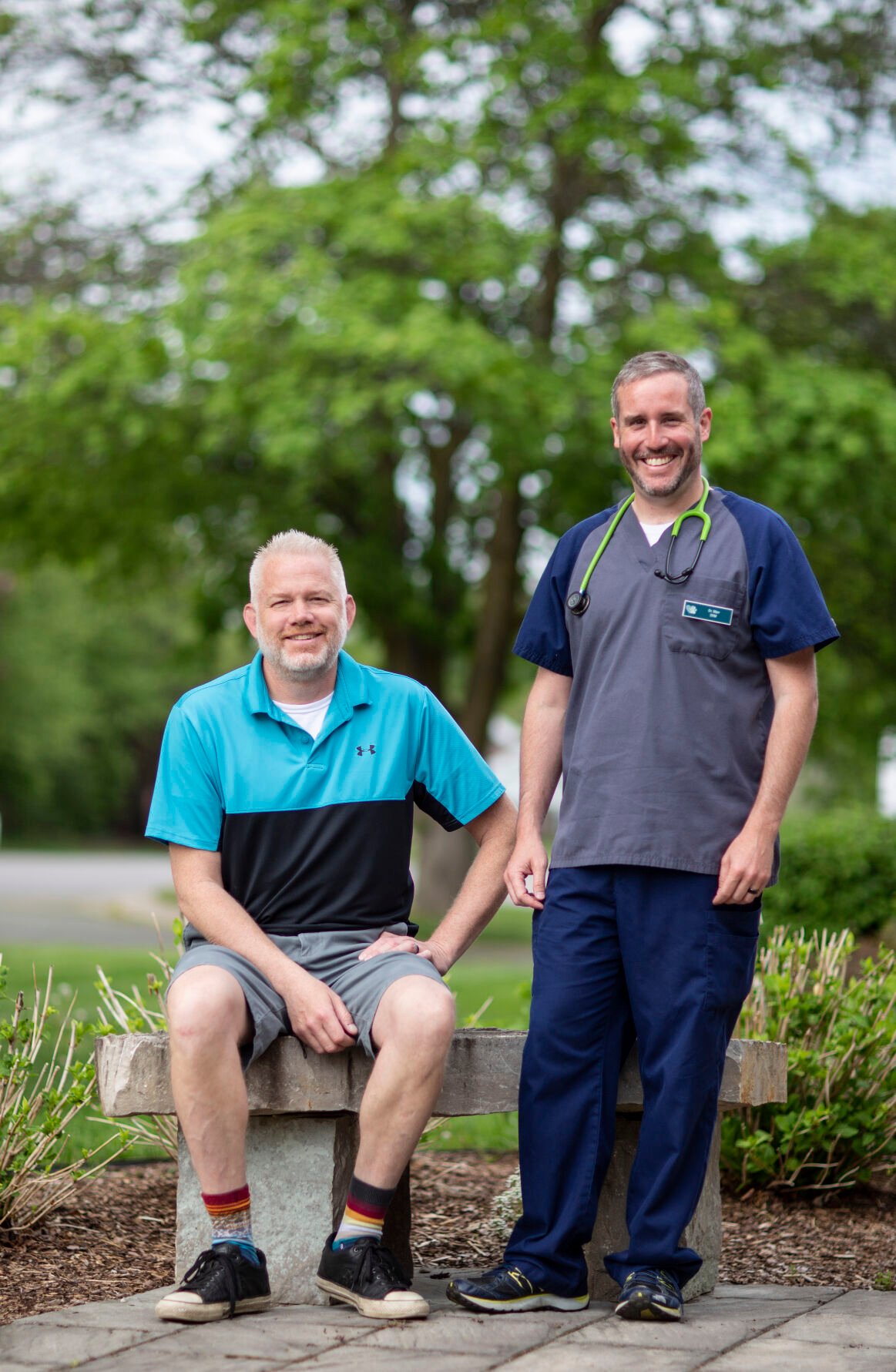 TRAVERSE CITY — It was a nerve-racking drive home.

Chase Marr, then 22, had just left a hand-written letter on the kitchen island at parent’s home asking them to read it when they were together.

Its content could forever alter the future of their family.

“I knew at an early age in middle school that I was struggling with something internally. Tried dating — you know, that whole awkward scene as it is as a teenager anyway, but even all through high school — nope, wasn’t who I was,” said Marr, a veterinarian, and co-owner Grand Traverse Veterinary Hospital.

Being gay was an isolating realization for a young person growing up in Coyville, Kansas, he said.

Marr’s work biography on the animal hospital’s website explains his hometown counts just 43 people to its population rolls, most of whom he reports are family.

By the time Marr was ready to share his truth with his parents, he’d already come out to his cousin.

Marr remembers it was a Monday. His parents would find his letter after they’d returned home from work.

By then, he’d be back at college.

“Me, living alone just kind of started pacing back and forth. Finally the phone rings and it says my dad’s name on it. So I kind of take a deep breath, answer it,” said Marr.

The conversation started with small talk.

Then the phone went silent.

“‘Well, we got your letter,” Marr’s dad said into the phone.

“I started crying and he did too, and he said ‘don’t ever hide anything from us again,’” said Marr. “He said that he always loved me no matter what, and this just made him love me more,” Marr said, as he cried.

Then Marr heard his mother’s voice.

“She said ‘don’t cry,’ she said, ‘I’ve always suspected, we love you for who you are this just means you can go shopping with me more,’” said Marr as he chuckled.

Marr, now 33, said his parents’ response freed up a whole new world for him and further solidified what had already been supportive family relationships.

“It just changed my whole life; it was a brand new me at five days before my 23rd birthday,” he said.

Marr received what could be considered an ideal response when he took the vulnerable step of revealing himself his parents.

Others aren’t as fortunate.

Some who come out, receive far less validating parental reactions that can include being asked to leave the family home and family estrangement.

The latter is what happened to Chase Marr’s husband, Richard Marr, 50, who co-owns Grand Traverse Veterinary Hospital with his spouse and serves as the practice manager.

Richard came out to his father when he was 20 years old.

“My real dad took it differently, he, you know, very religious, very Catholic,” he said.

After Richard shared his sexuality with his dad, the two didn’t speak for almost 21 years. They have since rekindled their relationship, he said.

“He just wasn’t ready to understand it at that point,” said Richard. “It was just that time of life, it was 30 some years ago.”

Ironically, Richard now credits his husband with helping to heal the wound between him and his father.

“With Chase it’s been tenfold because I think he likes Chase better than me,” said Richard.

“His dad is my garage-sale buddy,” said Chase. “And the antique junky guy.”

Much like the diverse spectrum of sexual orientation and gender identities, so too, can parental responses range.

Nikki Wald is a private practice therapist and owner of Set Forth Counseling in Traverse City.

Her work is inclusive of those on the LGBTQ + spectrum. To that end, she counsels both LGBTQ + adolescents and their parents who may be struggling with what could be new information about their child

“You have to meet people where they’re at,” said Wald. “There’s different families with different kind of belief systems and orientations and experience and all kinds of individual circumstances that people are dealing with.”

She guides her adolescent clients struggling to come out to first reach out to a trusted adult, someone who “gets you the most,” and to practice the conversation with that person.

“In a perfect world, they’re’ coming out, and their parents are aware, or the guardians or caregivers are aware on some level that their reaction is very important,” she said.

Wald urged parents hearing the news for the first time not to focus the conversation on their own emotions, and to be self compassionate.

“Self compassion is your friend, take deep breaths,” she said, “If your child is coming out to you it’s probably because they trust you and rely on you, your support, that’s a good thing.”

“It’s normal to be surprised even if there were signs,” Wald added.

The Marrs hope they can serve as a testament that gay couples can thrive in love and in the life. The duo, who met online, navigated through their 17-year age difference to eventually marry and become business partners.

“So much fun,” added Richard.