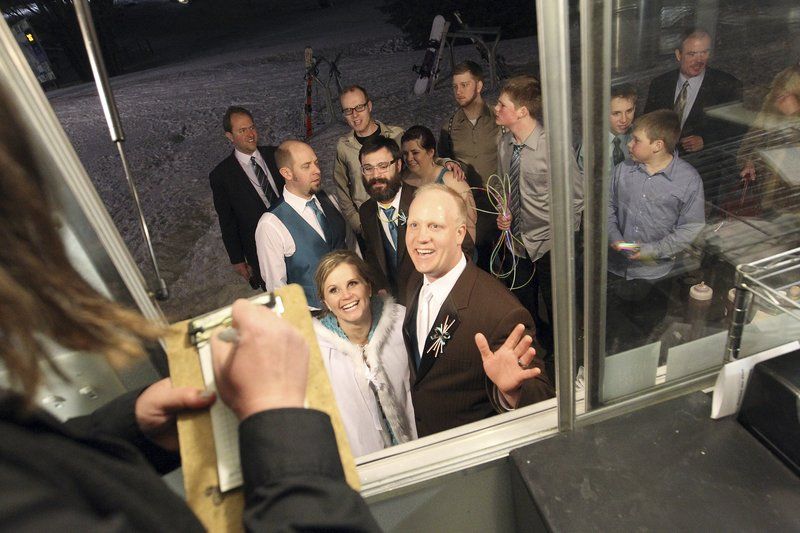 Record-Eagle photo/Jan-Michael Stump Shana and Jeffrey Andres place their order with Susan Clark at the Pigs Eatin' Ribs food truck outside their wedding reception at the Crystal Center at Crystal Mountain. 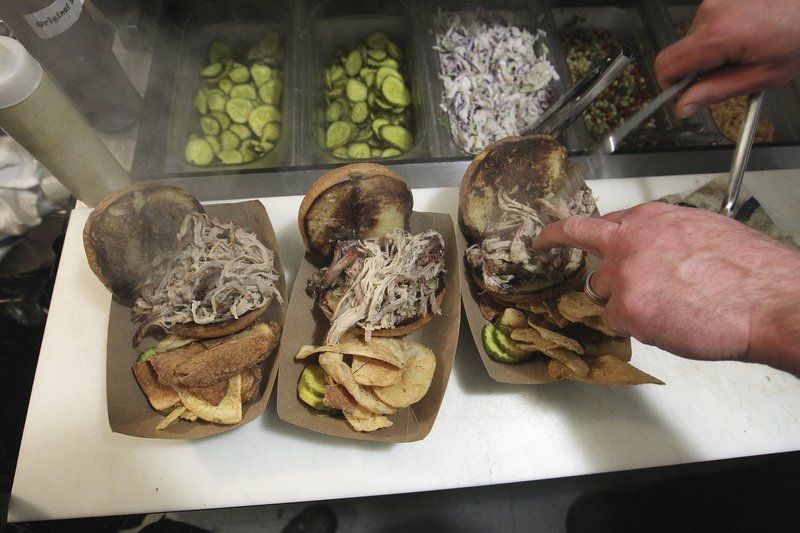 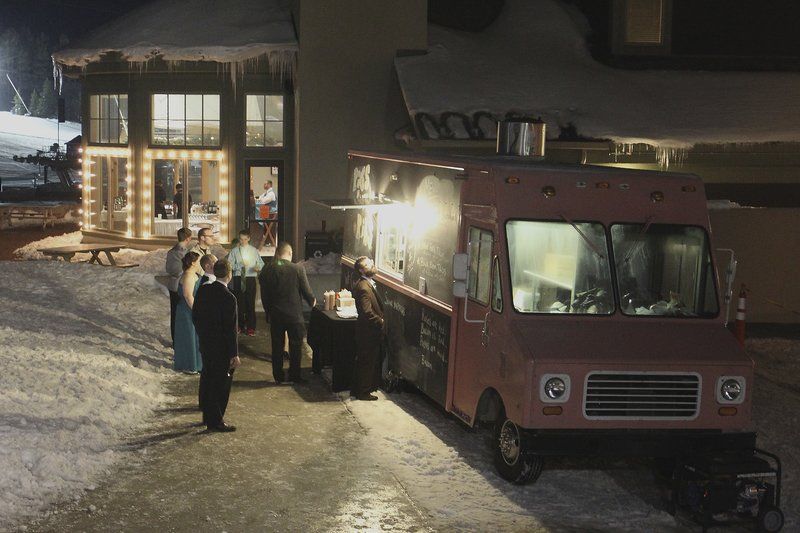 Record-Eagle photo/Jan-Michael Stump Wedding guests gather around the Pigs Eatin' Ribs food truck Jeffrey and Shana Andres had outside their wedding reception at the Crystal Center at Crystal Mountain offering late night barbeque for their guests. 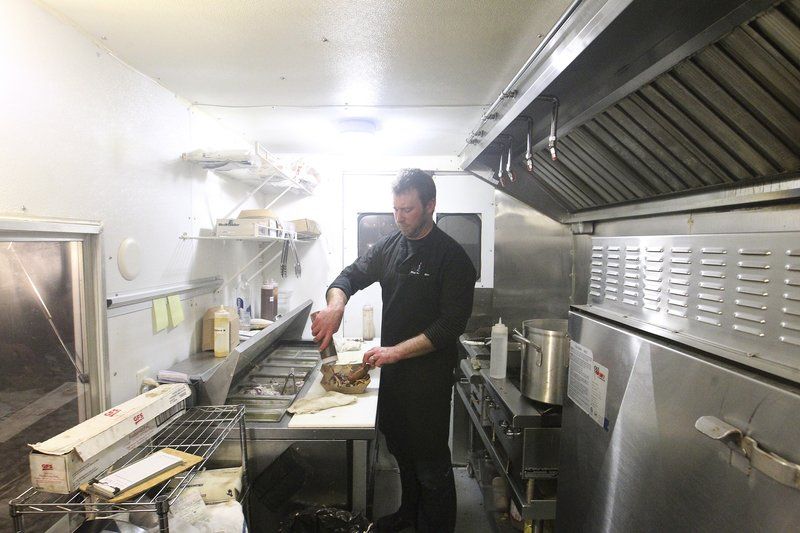 Record-Eagle photo/Jan-Michael Stump Shana and Jeffrey Andres place their order with Susan Clark at the Pigs Eatin' Ribs food truck outside their wedding reception at the Crystal Center at Crystal Mountain.

Record-Eagle photo/Jan-Michael Stump Wedding guests gather around the Pigs Eatin' Ribs food truck Jeffrey and Shana Andres had outside their wedding reception at the Crystal Center at Crystal Mountain offering late night barbeque for their guests.

TRAVERSE CITY — There's a fast-moving new trend in the world of wedding cuisine and it's got wheels, literally. Foodies headed to the altar are bringing food trucks along for the ride.

It's the latest boom in an industry that rewards the trendy.

“We checked out three caterers in the area and their prices were double — and their food wasn’t as good,” said Scott O’Mara, a financial adviser from Lansing.

The couple worked with chef/owner Simon Joseph to select a menu based on what was in season and wound up with upscale tacos, including veggie, cream and blackened whitefish options. Roaming Harvest also set up an appetizer bar with savory bites like tomato caprese and roasted beet hummus.

“It was more farm-to-table fresh stuff and made right there,” O'Mara said.

Wedding truck food can go from casual to elegant. Some bridal couples opt for picnic-style fare, including chicken, ribs and pulled pork with sides like baked beans, coleslaw and corn-on-the-cob. Others want the street food experience, from tacos and mac-and-cheese bites to sliders and wings.

Staff prepare much of the food ahead — “A lot of our meats take up to 14 hours to cook," Kline said — but finish everything onsite for an authentic food truck feel.

"When you have a buffet line, you go up, get your stuff and go sit down and eat. We make it fresh for you, per order, and people interact with each other in line," Kline said.

His truck can serve 300 guests in about 45 minutes.

"People are drinking for seven hours," said Shana Warner, of Corunna, who skied down the slope to meet her groom. "You need something after this six o'clock dinner. That’s a long time to go without food."

"We wanted people to be able to mingle and move around. We didn’t want people to sit at the same table the whole time," said Erwin, a preschool teacher from Athens, Georgia.

Each of the trucks offered their regular menu. But Erwin made sure there were vegetarian, vegan, non-fat and gluten-free options for guests with special dietary needs. The couple also served Greek appetizers and desserts catered by Opa! and Underground Cheesecake, and a small wedding cake.

“We loved the informality of it, and it lends itself to a little more adventurous eating,” said Tank, who teaches an accelerated learning program at a technical college. "You end up trying things you wouldn’t try at a restaurant setting.”

“A lot of people are taking The Little Fleet and having their parties here. Guests go to a truck with something that identifies them as being with the wedding party, like a ticket or a boutonniere, and the truck doesn’t charge them but keeps track of the total bill. Little Fleet bills the bride and groom, and then they pay the bar bill," Jonas said.

Costs for food truck catering vary, depending on the vendor, the menu and, in some cases, the number of guests. But it compares favorably to other forms of catering.

“I know people who have gotten married recently and had a catered buffet dinner,” Tank said. “Ours ended up being less than that, by a significant amount.”

But he said cost didn’t factor into the couple's decision.

"The main thing is we wanted to avoid the stuffiness of a lot of wedding receptions," he said.

Allison Beers and her Events North event management company has worked with only one food truck wedding so far. But Beers said the catering idea is becoming “the new trend.”

She suggests brides and grooms who want to go that route consider having more than one food truck, supplementing a single truck with catering, or having a food truck supply late-night snacks instead of the main meal.

“Instead of doing late-night pizzas brought in, a food truck is a great way to wrap up the night,” she said.