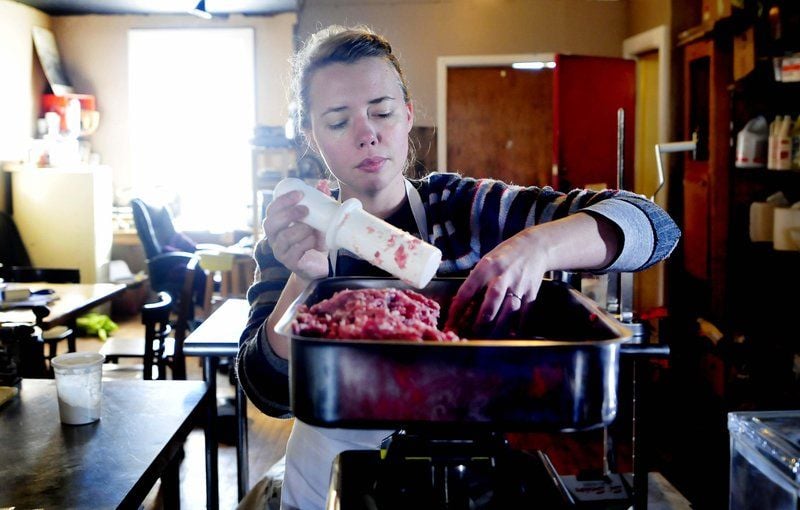 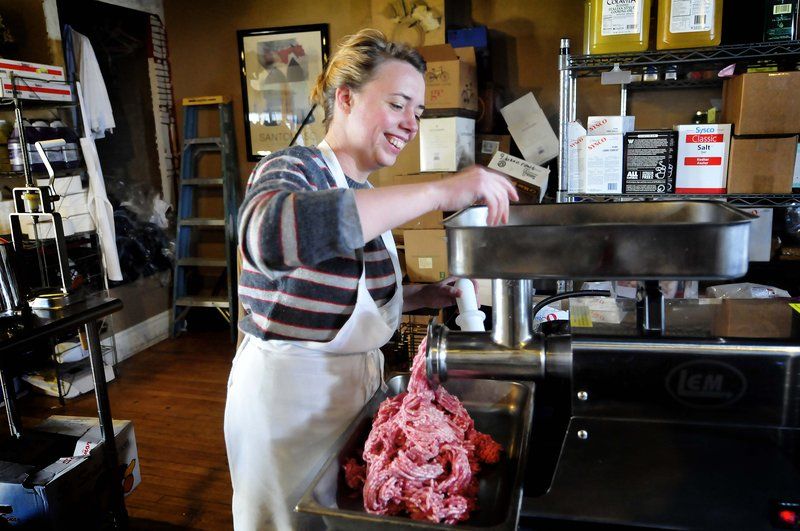 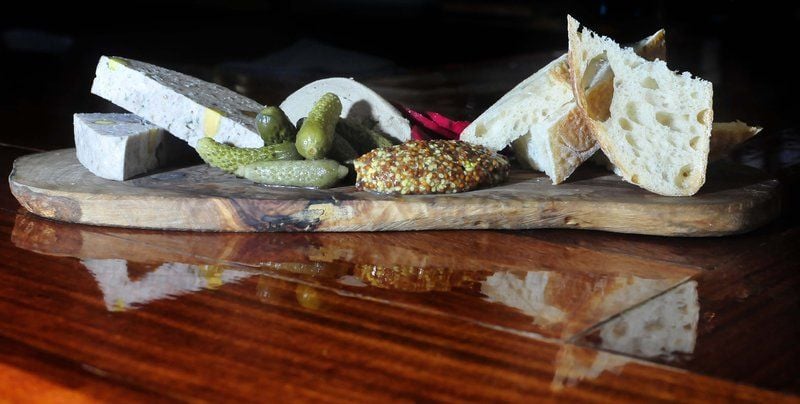 Special to the Record-Eagle/Katy BatdorffA charcuterie plate from 9 Bean Rows Restaurant in Suttons Bay, served up by Chef Andrea Deibler. 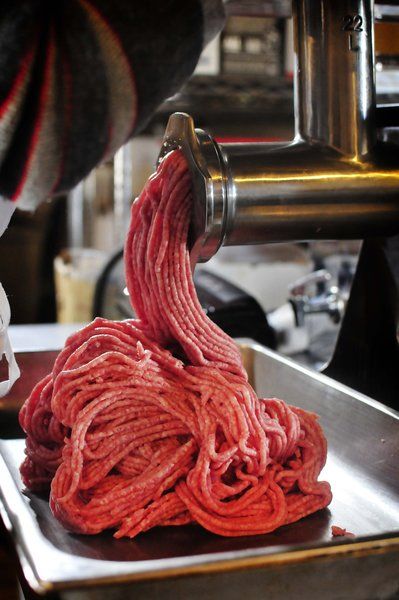 Special to the Record-Eagle/Katy BatdorffGround meat at 9 Bean Rows Restaurant in Suttons Bay. 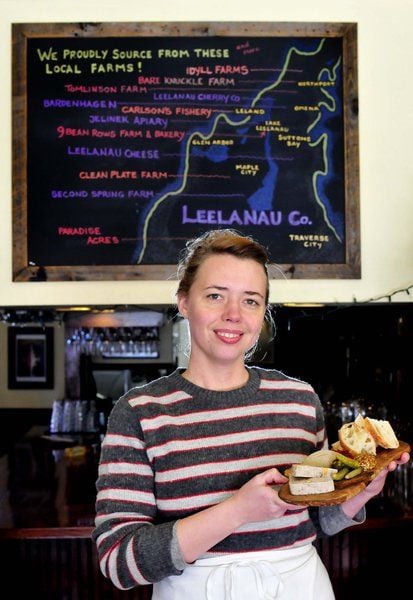 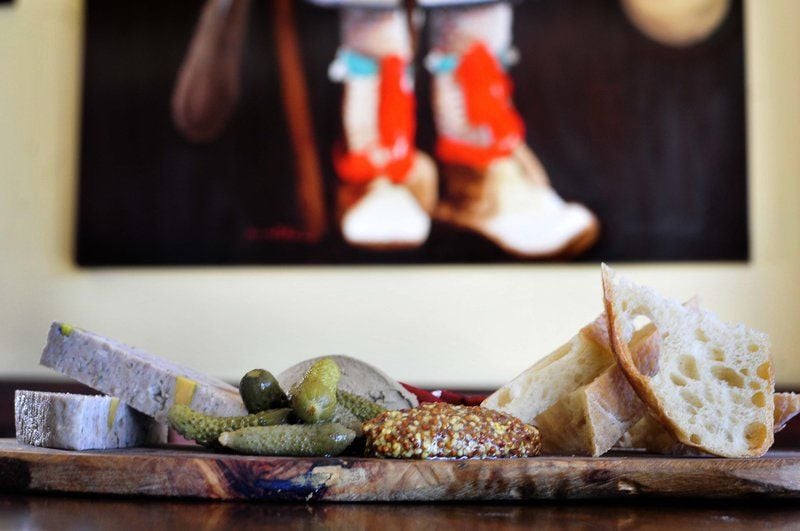 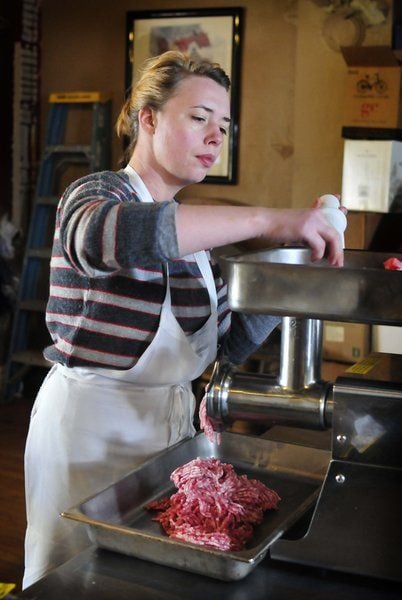 Special to the Record-Eagle/Katy BatdorffA charcuterie plate from 9 Bean Rows Restaurant in Suttons Bay, served up by Chef Andrea Deibler.

Special to the Record-Eagle/Katy BatdorffGround meat at 9 Bean Rows Restaurant in Suttons Bay.

Her childhood epiphany made the leap from "no" to "nose-to-tail" in culinary school.

"I decided as a young kid that animals are treated badly and that I didn't want to eat them," Deibler said. "But in culinary school I decided to figure out a sustainable way to eat and prepare meat in a way that respects the animal."

She started incorporating chicken and fish into her diet; whole animal butchery into her repertoire.

Today Deibler, who cooks at 9 Bean Rows, is the person you call when you want to butcher a pig and create magical charcuterie with all of the "little tasty bits."

"Those are the best parts, in my opinion," Deibler said of the fodder for her specialty cured meats, sausages and pates.

Whole animal philosophy sews accountability into every link in the food chain, standing for better living conditions for animals, sustaining the local farmer that raised the animal and ultimately, benefiting the customer who now knows what their veal ate for lunch. Today's meat industry — with the advent of refrigeration, feedlots and processing plants — is a far squeal from it now.

Department store butchers use their knives to slice packages of pre-cut meat and "protein" arrives to most restaurants in portion-size steaks, loins, links and patties, Deibler said.

"I started asking about whole pigs and cows and no one was really doing that," said Deibler of the restaurant business a decade ago. "I found a guy butchering whole animals and I basically worked for him for free."

Every Thursday they'd break down a pig, she said. Then Deibler got a butcher job at a sustainable deli in Chicago, working the meat counter.

"Specializing in something unique gave me a leg up," Deibler said. "The retail butcher needs to be customer-oriented. There has to be the image of your friendly neighborhood butcher for that craft to remain viable."

The craft, undercut by low prices of large-scale meat production, is suffering but whole animal awareness — through events like Pigstock TC — and the deeper general interest in food accountability helps, Deibler said.

For her the "fun part" of whole animal processing is the charcuterie, or prepared meats resulting from those "little bits." Charcuterie is a top food trend nationwide as people look to the age-old craft to put something new on the table. The craft, born of pre-refrigeration food preservation, is now prized for the unique flavors and character the processes lend to the meat.

Deibler can be "creative" with the smoked pork, sausages, mousses, corned beef and pastrami, she said. But she pays homage to her predecessors first — dry curing meat has been around for "thousands of years" and is all about learning the virtues of time and experience.

"I like the idea of learning a specific craft and honing it until you get good at it," Deibler said.

The stereotype of the strong man butcher is well-deserved, given that a side of beef weighs upward of 300 pounds. But more women are entering the field, knives in hand.

"There are giant hooks and rails and we use gravity to our advantage, but even a big strong dude gets help," Deibler said. "You don't have to be super-muscley — just smart about it."

That said, dry curing is a potentially dangerous process, not a casual one, Deibler said. She is wary of the "craft butchery" trend that has young hipsters breaking down meat in their basements without proper training or sanitation. Bad craft beer tastes awful but awful offal can make someone sick.

"I wish there were more classes on how to teach people how to do it correctly," Deibler said.

The Kansas City, Missouri, native will teach sausage, pate making and chicken butchering classes this year through Northwestern Michigan College's extended education program. She hopes to open a small charcuterie shop of her own in the area once she establishes relationships with local meat growers and both the health department and public become more familiar with charcuterie.

"People are becoming more interested in where their meat comes from," Deibler said. "I always liked meat. I don't remember that being the issue."