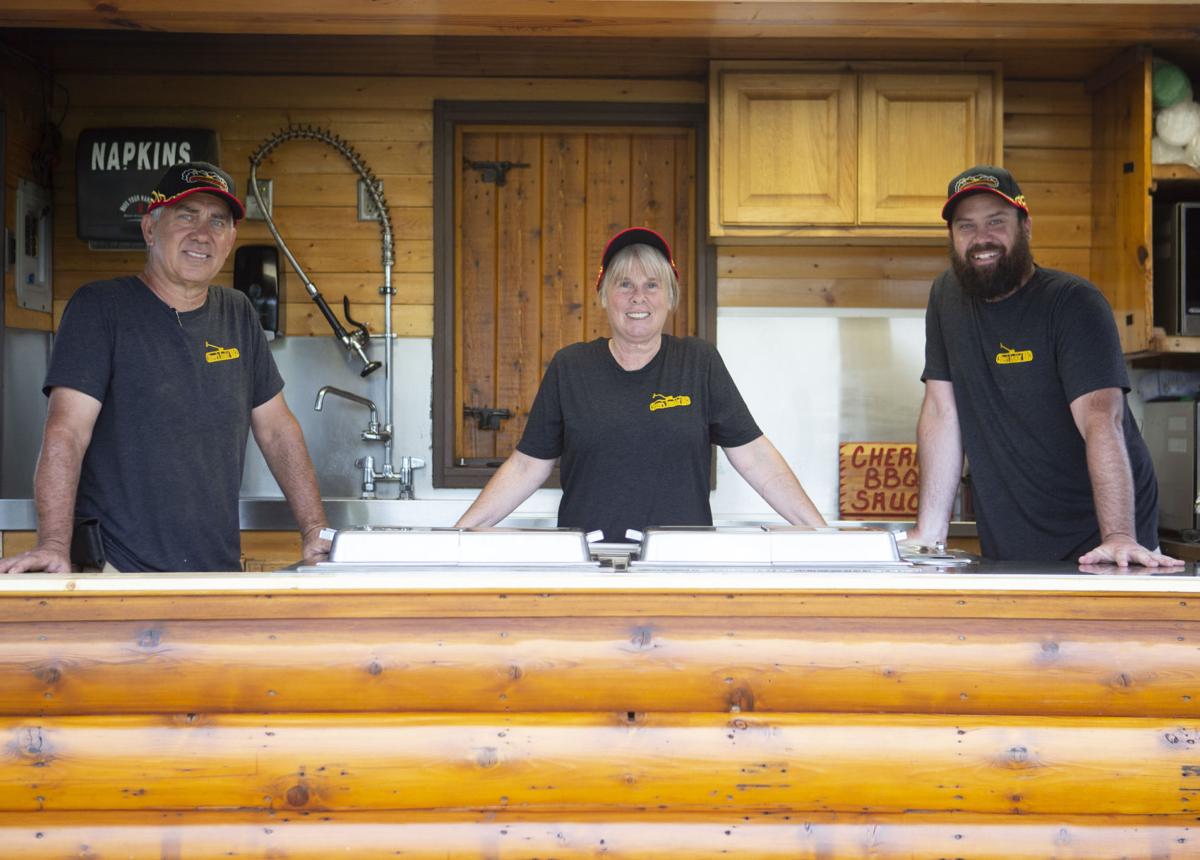 From left, Steve, Lori and Logan Randell pose for a photo in the Steve’s Smokin’ BBQ trailer at the Open Space on Friday in Traverse City. 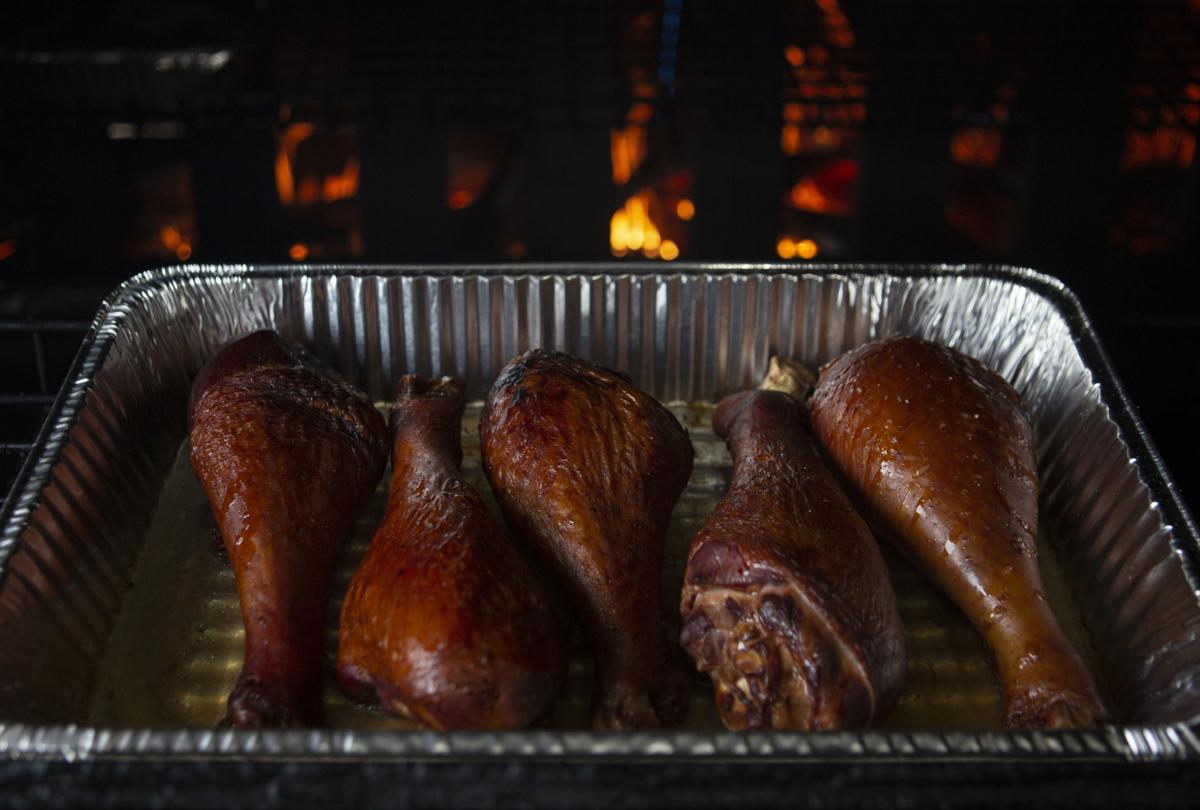 Turkey legs sit in a smoker in the Steve’s Smokin’ BBQ trailer at the Open Space. 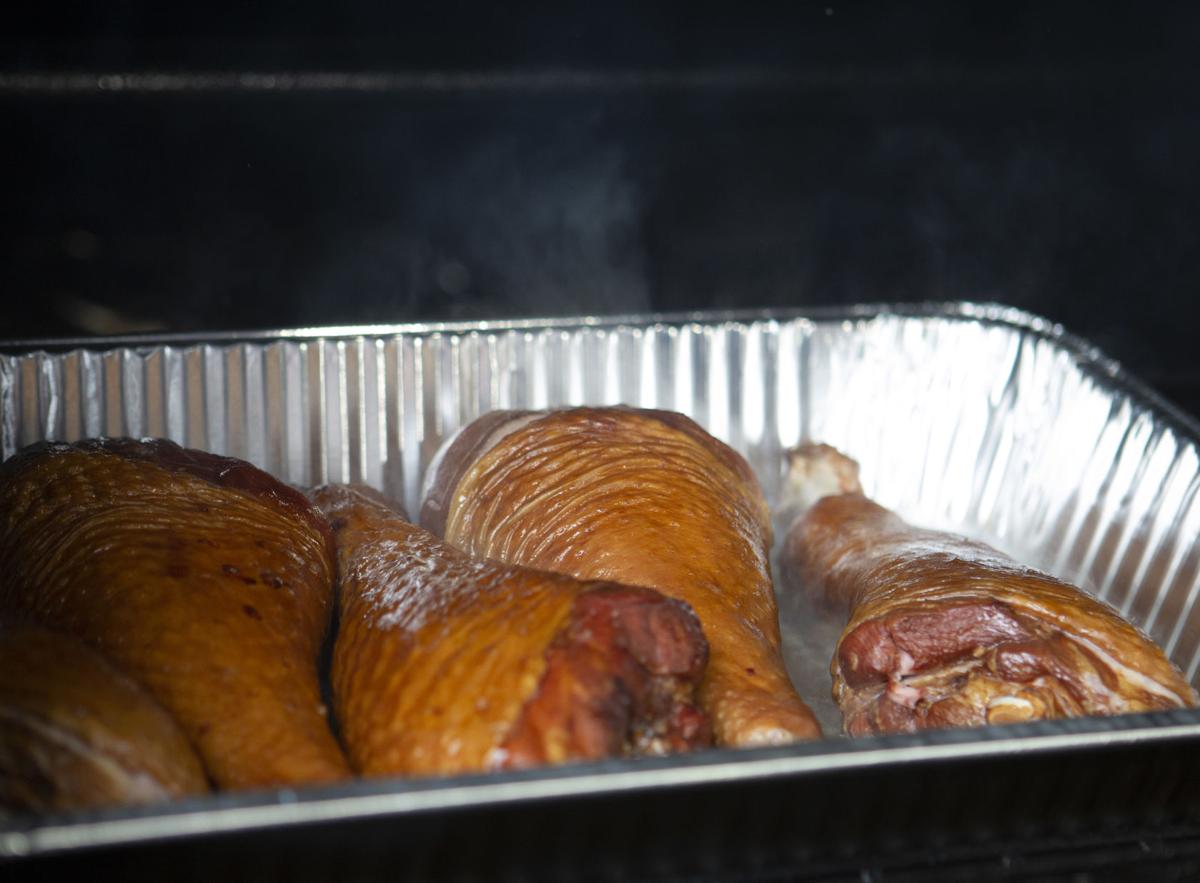 Turkey legs sit in a smoker in the Steve’s Smokin’ BBQ trailer at the Open Space on Friday in Traverse City. 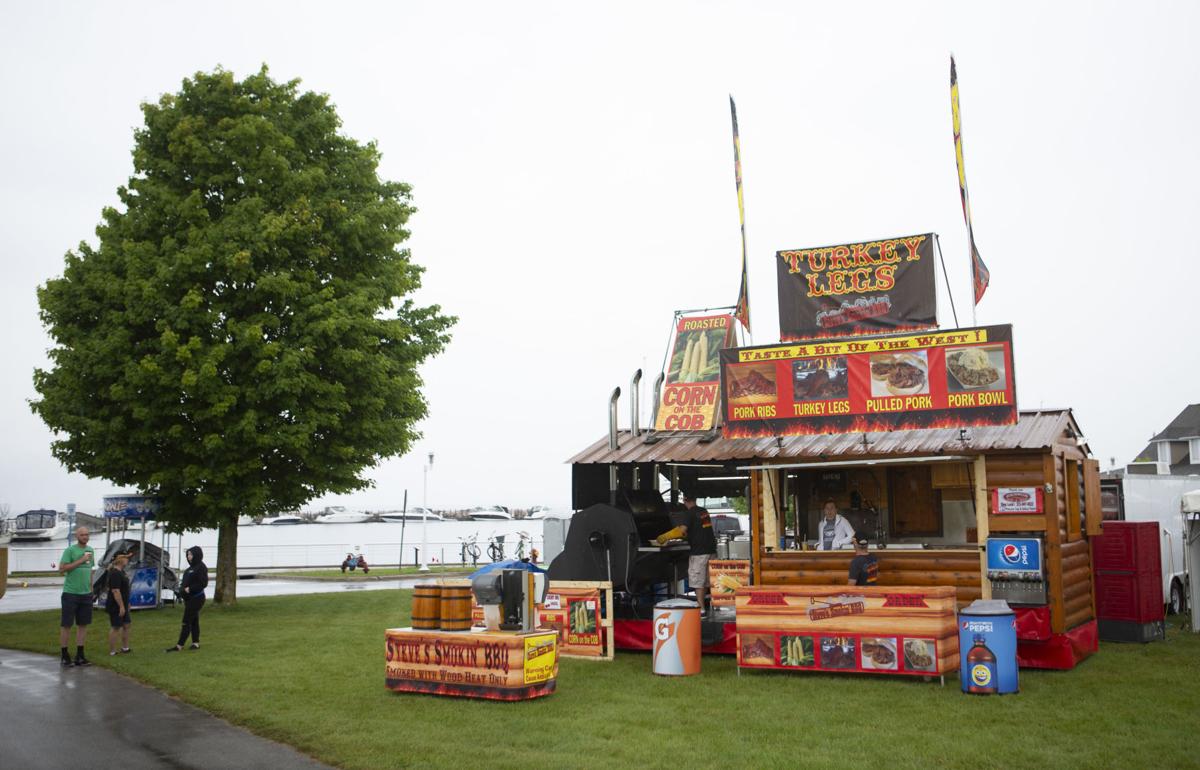 From left, Steve, Lori and Logan Randell pose for a photo in the Steve’s Smokin’ BBQ trailer at the Open Space on Friday in Traverse City.

Turkey legs sit in a smoker in the Steve’s Smokin’ BBQ trailer at the Open Space.

Turkey legs sit in a smoker in the Steve’s Smokin’ BBQ trailer at the Open Space on Friday in Traverse City.

He does it all in an aluminum-sided trailer.

“We do it all right there on the smoker,” said Randell, a longtime local, veteran smokemaster and the name behind Steve’s Smokin’ BBQ, one of the National Cherry Festival’s favorite food vendors. “Our best-sellers would be the pork and the turkey legs — easy. Though we do a heck of a lot of corn.”

The Randells joined the Cherry Fest docket more than 15 years back and have served up plates every summer since.

“This is our favorite show,” Randell said.

“And the most beautiful event we do,” Logan added. “Right on the water and in downtown Traverse City? Doesn’t get much better than that.”

Festival organizers can’t wait to grab a bite themselves.

“My personal favorite is his pulled pork sandwich with cherry barbecue sauce — I have it at least once during the festival,” said Kat Paye, Cherry Fest executive director. “You can smell the smoker.”

Steve’s is one of about 11 hot food vendors setting up shop in the Open Space, and another dozen market vendors join them with everything from cherry cookies, doughnuts and cakes to dog biscuits and smoked meats.

“There’s chocolate-covered cherries all the way to cherry jerky from Deerings,” Paye said. “Anything you can find with cherries in it.”

On the concessions side, attendees can grab a brat, nachos, pizza and even pad Thai, not to mention line-drawing favorites like the fries dished up by Gibby’s Concessions.

The list also touts downtown staples — gyros and Greek salads from U And I Lounge and burgers from J&S Hamburg.

Joining the roster this year is Pennsylvania-based Bee’s Knees Grill, which focuses solely on all manners of grilled cheese.

“People, I think, love the atmosphere,” Paye said. “Even downtown employees come down on their lunch breaks.”

The Randells tour the state each summer — hitting Cherry Fest, of course, along with the Northwestern Michigan Fair and the downstate Monroe County Fair and Armada Fair.

They spend their winters on a fair and festival circuit in Arizona, hitting about a show a month until returning to Michigan in late spring for Cherry Fest prep.

It’s a slower schedule now — early on, they’d squeeze in about 15 Michigan fairs and dozens out west.

“We have a unique wagon and menu items so we get invited to a lot of shows — plus our magnetic personalities,” Randell said with a laugh. “We try to do whatever we can to make a show better.”

Now, though, they’re shopping around for a more permanent venue.

Steve’s Smokin’ BBQ has been the family’s full-time job since about 2001.

Randell worked in the oil industry before that and Lori was a manager at Sears.

They tired of travel and the time apart Randell’s work brought.

Working a summer with his brother-in-law’s operation, Gibby’s Concessions, proved an inspiration for Randell.

“We decided to do something together,” he said. “Barbecue was one of those up-and-coming things. It was unique at the time — and what we do is still pretty unique.”

Logan joined in full-time as the trailer’s popularity blossomed.

The menu began with staples: pulled pork and beef brisket, both done on the smoker.

It’s all smoke and meat — Randell uses no rubs or spices on either.

A house rub coats the ribs, served up in half-racks, and the turkey legs are brined in advance before a trip to the smoker themselves.

“We do a St. Louis-style rib — it’s a little more meaty, the bones are a little smaller,” Randell said. “It’s a good, tender rib.”

Randell took his time with that offering, spending more than a year experimenting with different cuts, cooking temperatures and rubs to ensure the best of the best.

The menu also boast a smoker-baked potato, topped with chives, cheese, bacon and, upon request, a heap of pulled pork or brisket. Another major seller is corn on the cob.

Randell, through a local collaboration, offers everything with a serving of cherry barbecue sauce, formulated specially for the Cherry Fest crowd.

This year, to beat the festival’s massive crowds, Steve’s will move its registers outside the truck to accommodate an extra cashier and faster service.

The National Cherry Festival kicks off today, June 29, and runs through July 6.

Catch Steve’s — and other tasty offerings — each of those days.

Images, happenings and updates from the National Cherry Festival. Join the conversation by using #CherryFestival or clicking "What's on your m…