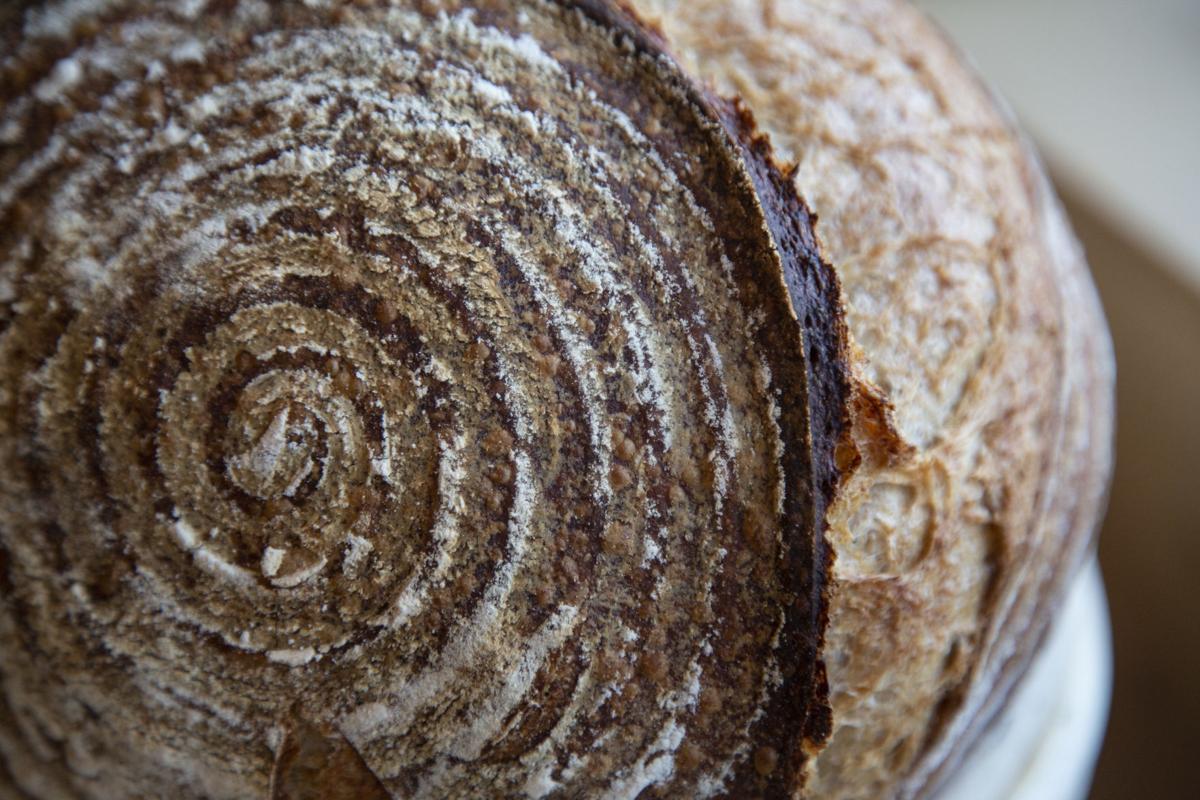 A French peasant loaf at Common Good Bakery in Traverse City on Friday. 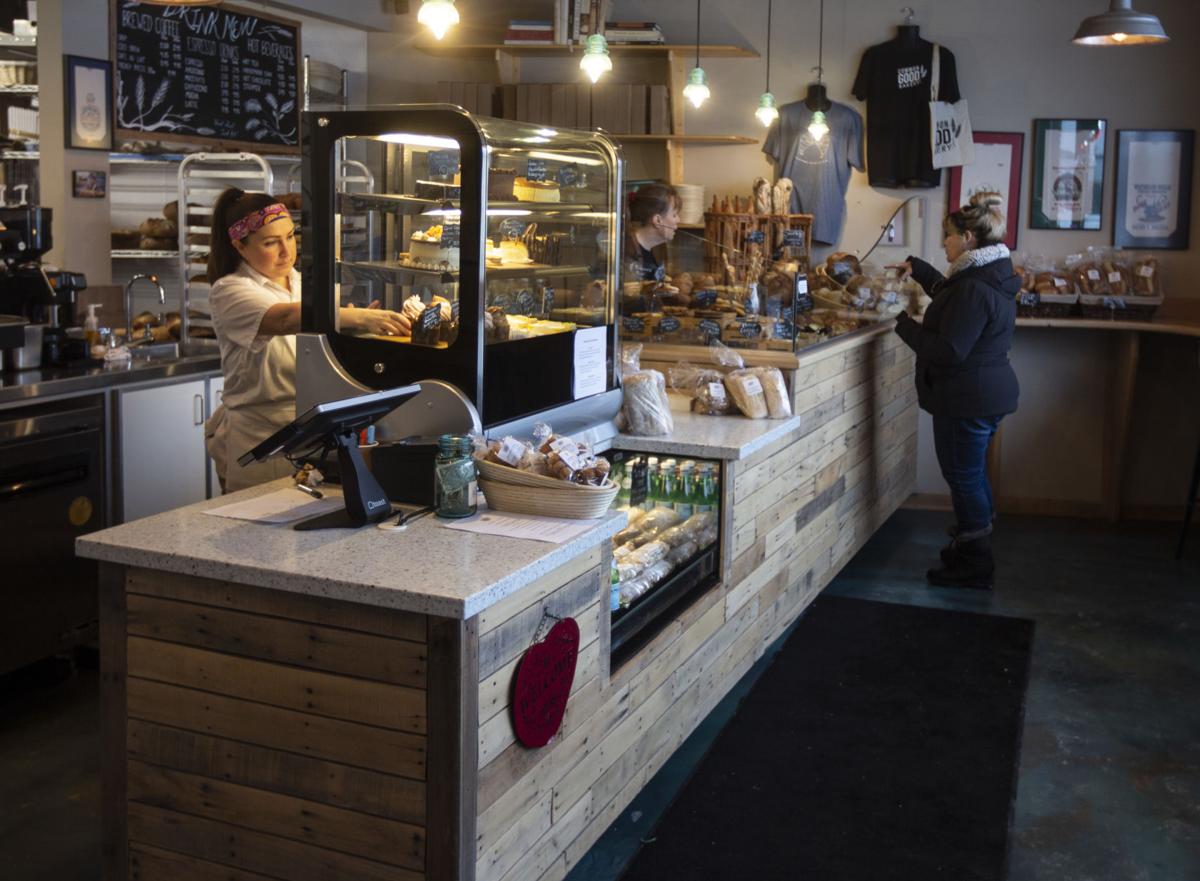 A French peasant loaf at Common Good Bakery in Traverse City on Friday.

Jason Gollan opened the 14th Street shop in August 2017 with the intent to offer good service and quality products that keep people coming back.

Though the main focus is breads, Gollan said they also make sweet and savory pastries, cookies, croissants and breakfast sandwiches. Cold sandwiches — like turkey BLTs, ham and cheese and vegetarian options — are ready for customers to pick up anytime.

He said they try to offer different items than what is around town, which is why they do not sell donuts and only make one birthday cake that changes flavor seasonally.

“It’s a European-style bakery, a full-line bakery café,” Gollan said. “We sell a lot of our croissants and Danish — that’s more than half the business.”

Bread is made fresh daily, but Gollan said they may prepare it ahead of time and then freeze it for a day or so. He often starts by asking “When do we need the finished product?” and works backward.

The daily process: arrive around 1 a.m., mix the dough, transfer to cooler, laminate and shape.

“It’s a fairly complicated process to have everything ready when we open,” Gollan said. “We are both a restaurant and a factory. Bakers are both engineers and artists.”

The bakery, Gollan said, operates under the mantra “do good, every day.” This means staying active with community groups like Norte and others.

Gollan said this gets bread to more people more frequently, as they deliver to the cooperative every day.

“It seems to be going well,” he said of the nearly two-month old partnership. “People aren’t doing this in town. Oryana is a perfect fit because it’s a similar customer.”

Oryana Marketing and Communications Manager Stephanie Mathewson said customers like the selections so far and store staff was excited to offer something new.

“We were so honored to be the first other retail place for Common Good,” Mathewson said. “We’re always looking for high quality and really good ingredients.”

Though she is not sure which bread is the most popular storewide, she said she enjoys the whole wheat rolls with avocado for lunch.

“Their product just looks very beautiful as well,” she said. “It’s like a high-end French bakery, but made here in TC.”

The breads are enclosed by a protective case, rather than individual packaging. Mathewson said this cuts down on single-use plastic, which aligns with Oryana’s goals.

Gollan said they launched Common Good because “the world is full of cynicism and fear.”

“We want to embed the spread of positivity in our day to day,” he said. “I’m a big fan of this idea of conscious capitalism, which is to create as many wins for the organization as possible.”

They do this, Gollan said, by forming relationships with customers. People can pay when they are able.

Gollan explained that most days someone forgets their wallet, so they started accepting credit card numbers over the phone.

This idea stemmed from his childhood in a small New Hampshire town, where the family signed for groceries and sent the bill later.

“We don’t worry about it,” he said. “We figure out ways to say ‘yes’ as often as possible.”

Current hours are 6 a.m. to 3 p.m. Tuesday through Sunday. Gollan plans to open seven days a week in early April.

“We’re pretty happy so far,” he said. “The demand is there. Our biggest challenge is that we’re new ... More are discovering us through word of mouth.”

Common Good Bakery was named the top bakery in Michigan in the recent article “The Best Bakery In Every State” from Eat This, Not That. The list is based on data from Yelp.com.

Additionally, Gollan was appointed to the board of directors of the Bread Bakers Guild of America, where he and his wife Linda have been members about 20 years. Through this organization, they attended a trade show in Paris. Linda discovered canvas bread bags made by Indian women. She said she hopes to bring these to northern Michigan in the future.

Set oven to 350 F, adjusting the rack to the lower-middle. Line an 8-inch cake pan with greased parchment paper. Beat eggs in a stand mixer at high speed until their volume doubles, about 5 minutes. While beating eggs, melt chocolate and butter (adding coffee, if using) in a large heatproof bowl set over a pan of simmering water until smooth and warm (about 115 F). Stir once or twice. Fold 1/3 of the eggs into the chocolate mixture with a heatproof spatula until only a few streaks of egg are visible. Fold in half of the remaining eggs, and then the last of the eggs until the mixture is completely homogeneous.

Scrape batter into prepared pan, and bake 22-25 minutes until cake rises slightly, and an instant-read thermometer shows at least 140 F. Remove pan from oven and set on a rack until it cools enough to move into the refrigerator overnight.

Bring to room temperature 1 hour before serving and use a paring knife between the cake and the inside of the pan before turning it onto a serving plate. Dust with confectioner’s sugar and slice with a sharp, thin-bladed knife, dipping the knife into hot water and wiping the blade before each cut.