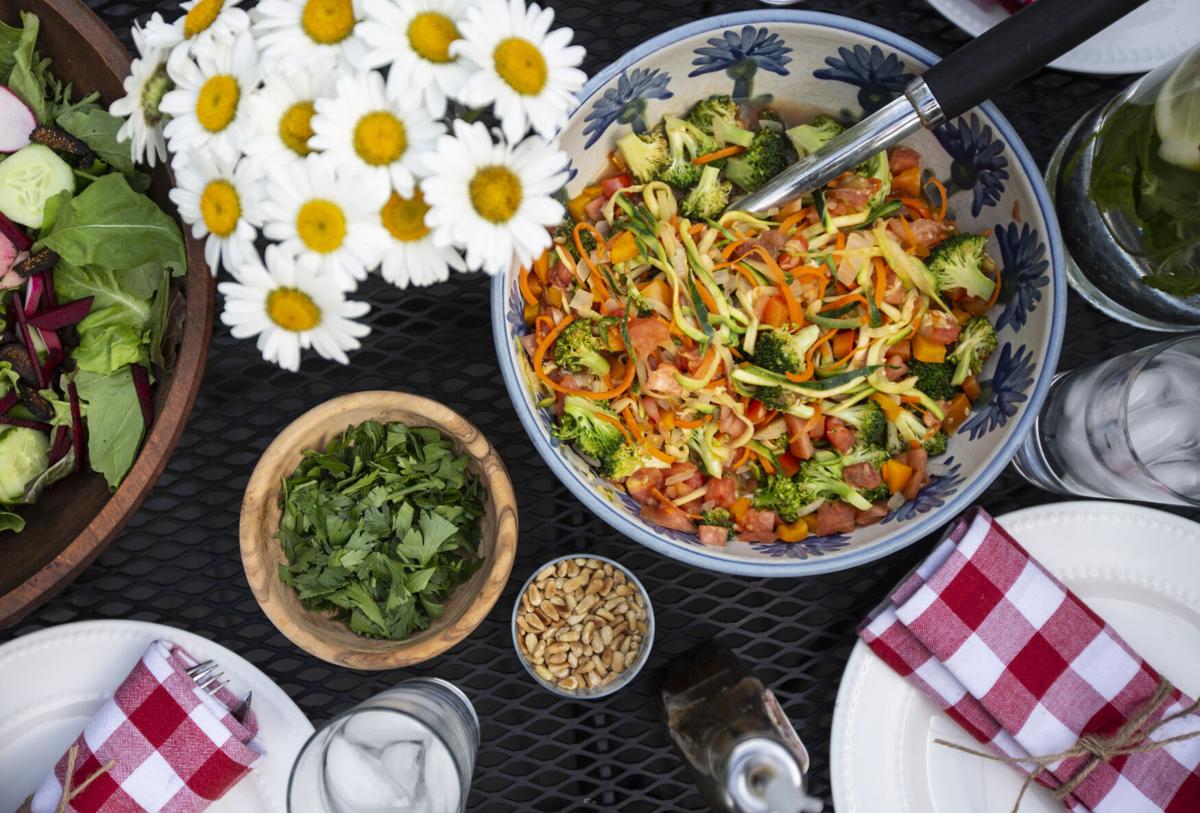 A zucchini pasta is served at Katherine Palms’ home in Suttons Bay. 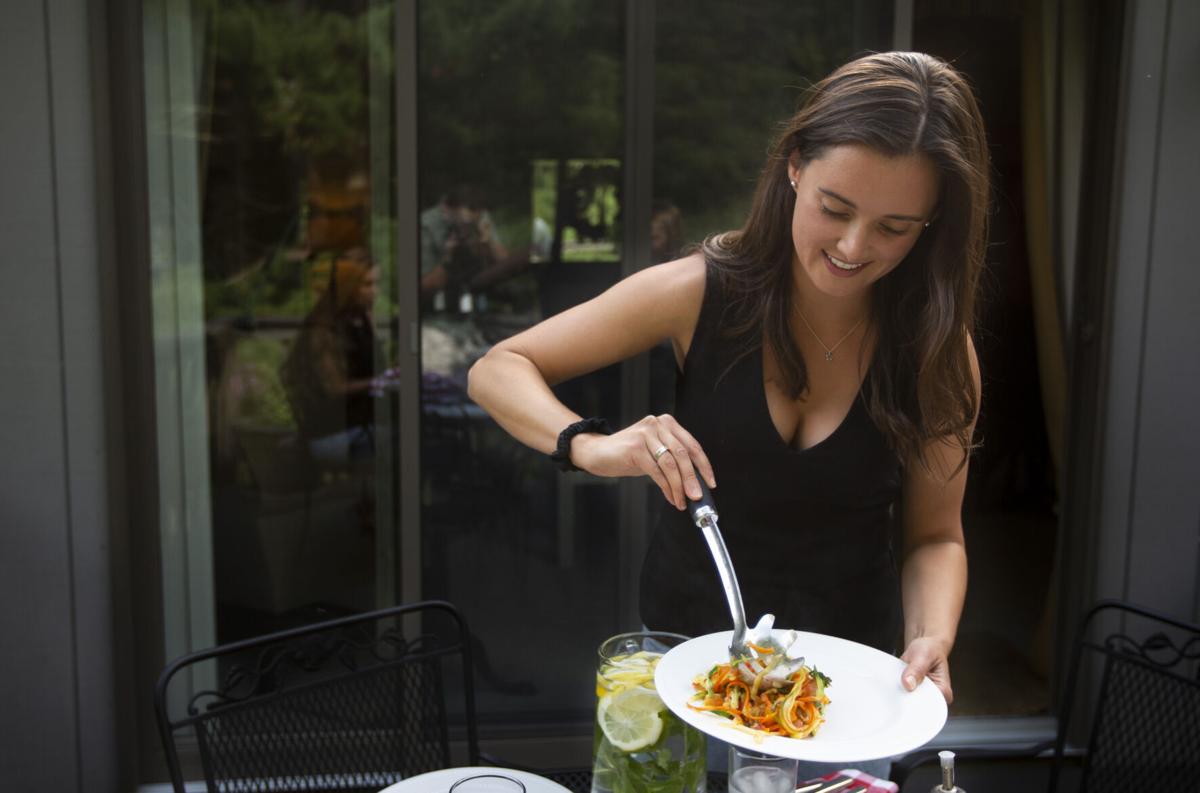 Katherine Palms prepares a serving of pasta at her home in Suttons Bay. 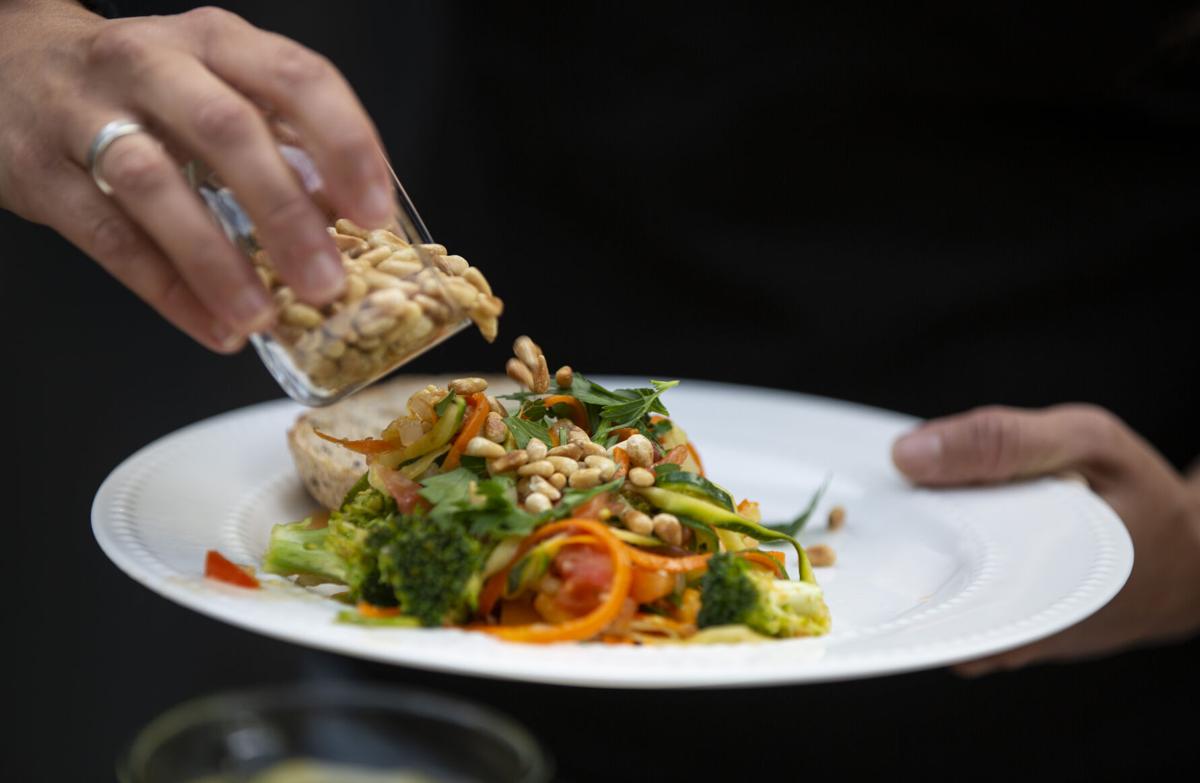 Katherine Palms puts the finishing touches on a pasta dish. 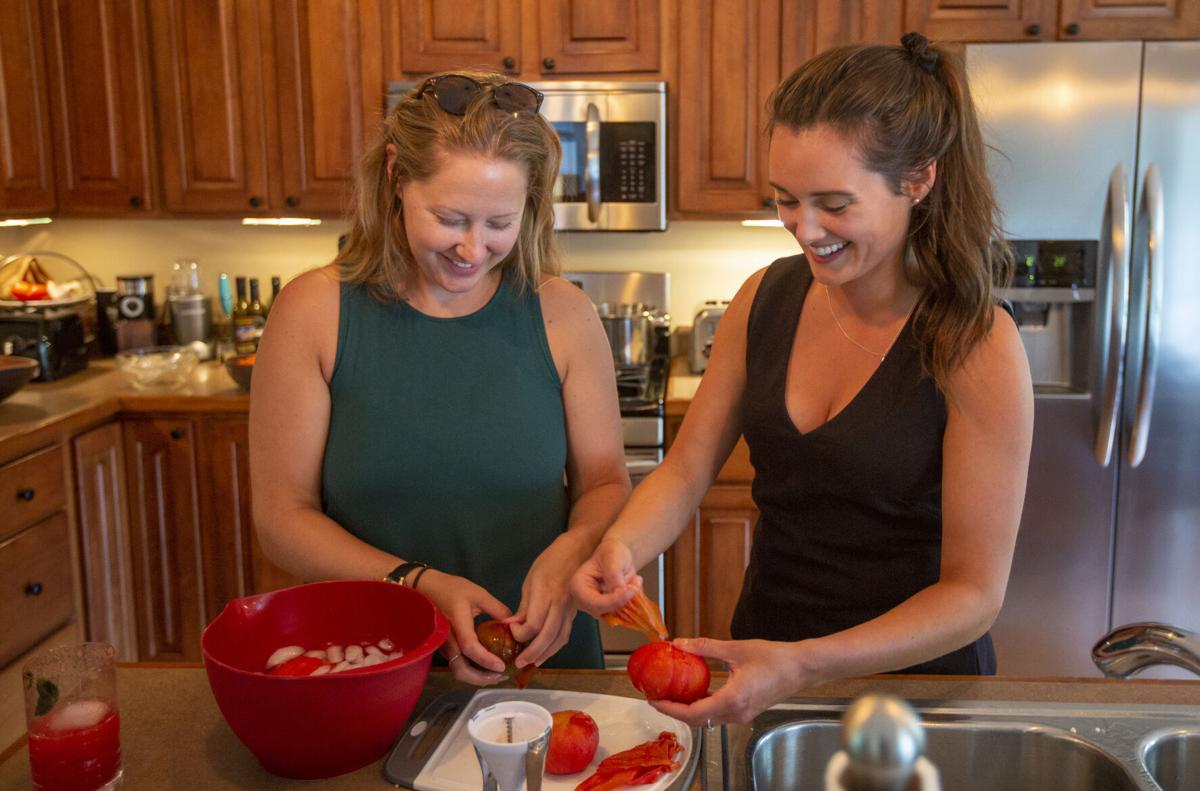 Kelly Kobberstad and Katherine Palms prepare tomatoes in the kitchen. 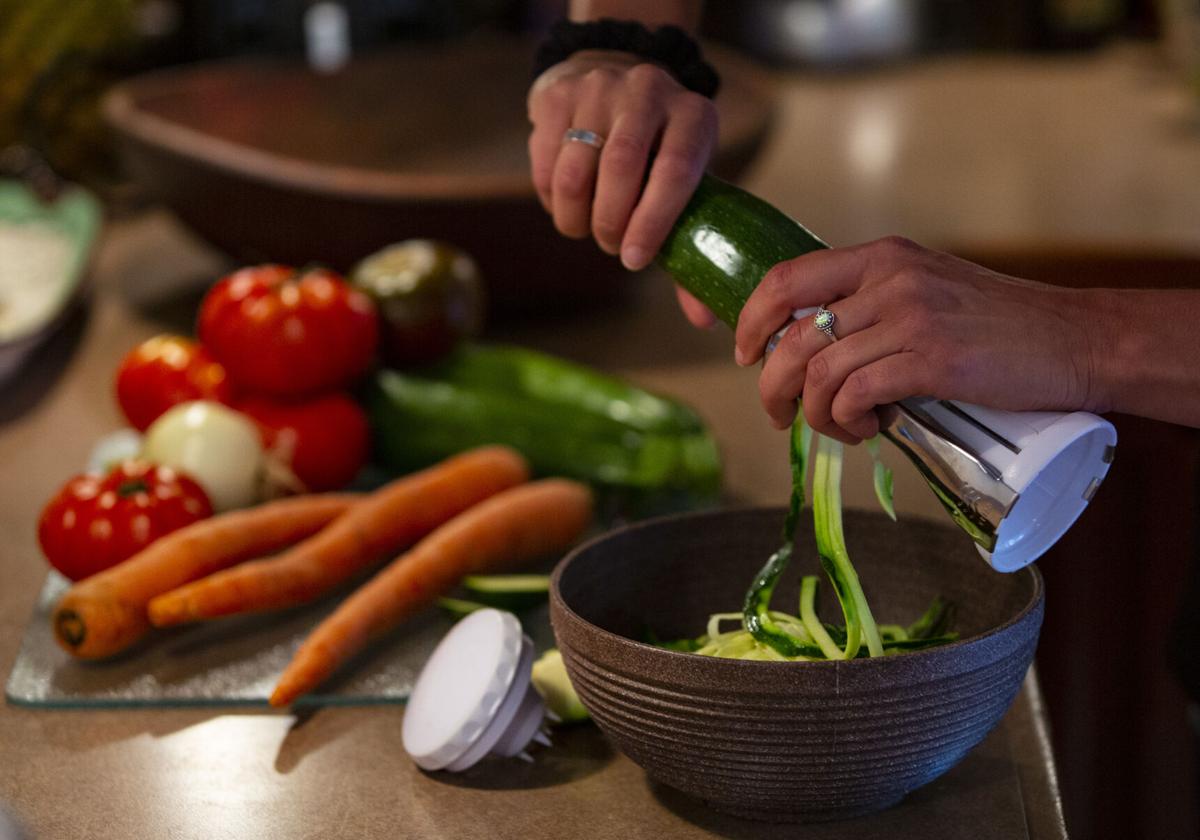 Katherine Palms’s uses a vegetable spiralizer at her home in Suttons Bay on Tuesday, July 21. 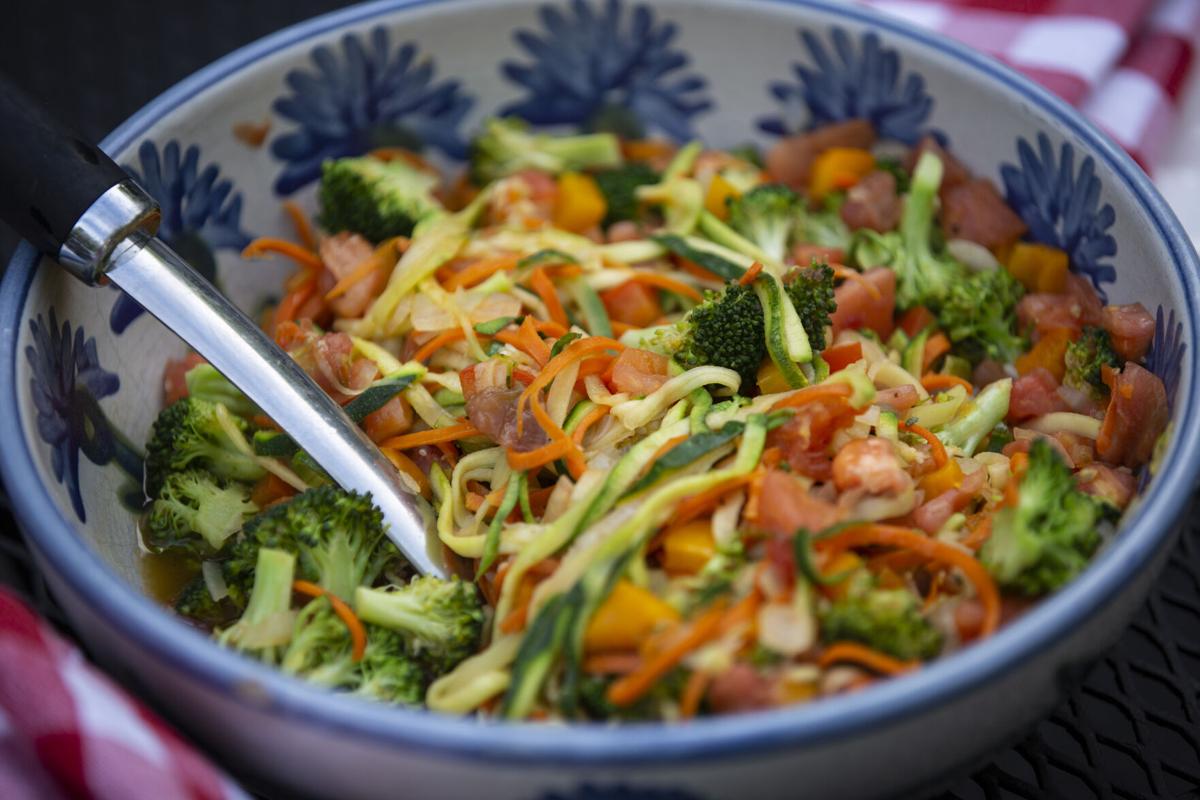 Katherine Palms’s zucchini pasta is served at her home in Suttons Bay on Tuesday, July 21.

A zucchini pasta is served at Katherine Palms’ home in Suttons Bay.

Katherine Palms prepares a serving of pasta at her home in Suttons Bay.

Katherine Palms puts the finishing touches on a pasta dish.

Kelly Kobberstad and Katherine Palms prepare tomatoes in the kitchen.

Katherine Palms’s uses a vegetable spiralizer at her home in Suttons Bay on Tuesday, July 21.

Katherine Palms’s zucchini pasta is served at her home in Suttons Bay on Tuesday, July 21.

The key ingredient in Guy Molnar’s favorite summer pasta recipe has a quintessential summer vibe: mellowed tomatoes. Using a mix of preferably heirloom tomatoes, abundantly available at the farmer’s market, Molnar chops and combines them with extra virgin olive oil and salt. The next step is to let them sit, or mellow, for a couple of hours. Then toss with cooked pasta — he usually selects fresh angel hair or linguine — and voila, summer on a fork.

“It is so satisfying, so delicious and so easy,” he said of this recipe by Lynne Rossetto Kasper, a former host of public radio’s “The Splendid Table.” “She suggests red and yellow tomatoes and maybe grape and cherry tomatoes.”

Saturday ventures to the Sara Hardy Downtown Farmers Market shape Molnar’s cuisines for the next week, as he chooses daily recipes based on his weekly harvest. His favorite time of the week is returning home, unloading the bounty on his counter and envisioning meals to come.

“Our little town has such an amazing farmer’s market,” he said.

The hotter months also open Molnar’s wallet when it comes to selecting pasta, a practical motivation that also pleases the palate. He and husband Matt McCormick’s small Traverse City condo heats up from extended stove use to boil water and then cook noodles. A splurge on fresh pasta speeds up cooking time significantly, which keeps the kitchen cooler.

“Summer is when I’ll spend the extra money on fresh pasta,” said Molnar, who is also an enthusiastic fan of Cappello’s almond flour pastas. “Like fresh angel hair, you toss it in the water and in a minute it’s done.”

Nicole Enger also takes a different approach to pasta ingredients in her Traverse City kitchen. Instead of traditional wheat flour noodles, she seeks out those made from a variety of sources, including red lentils and soba (buckwheat) pasta.

“One of my absolute favorites is black bean pasta, which has an amazing flavor to it,” said Enger.

She also relies on fresh summer ingredients and flavors to elevate her dishes and showcase seasonal plenty.

“I’m pretty open to trying new things and I also love summertime flavors, especially Asian ones like ginger and garlic,” she said.

Another flavorful and flexible summer recipe is tossing a mix of home-grown lettuces with herbs, such as parsley and tarragon, and adding it to cooked pasta.

“I’ve always had an herb garden and also grow my own peppers,” Enger added, noting that her entire extended family gardens. “My herb garden is insane, they turn into bushes.”

Produce is the source of actual pasta in Katherine Palms’ Suttons Bay kitchen. Eschewing traditional flour-based noodles, she instead reaches for her spiral vegetable cutter. This under-$10 tool transforms potentially carb-heavy dishes into refreshing summertime cuisine.

Turning the handle on her Vegetti creates zucchini or carrot spiral “noodles” that saute in two or three minutes (til just warm and tender) while providing a healthy, nutrition-packed base. This pasta alternative lends itself to hot or cold dishes.

Often sauteing some garlic and onions as a flavor foundation, Palms then coats her pasta with sauces including marinara or flavor-bursting pesto. Or she whips up a dressing such as balsamic vinegar, vegan cashew-based “cheese,” flavored sea salt with pepper or fresh herbs, olive oil and lemon.

“I love using herbs and have been loving parsley and cilantro, especially in a cold zucchini salad,” Palms said. “I add them together — it’s a great flavor.”

Summer’s abundance of fresh vegetables from her CSA — MI Farm Cooperative — support the plant-based chef in her pasta creations.

“You can make them super simple or complex,” Palms said.

Experimenting is her cooking raison d’etre and rarely are two dishes exactly the same. The ever-evolving nature of her weekly CSA box facilitates these explorations.

“I just love trying new recipes,” she added. “I have a couple of things I make over and over again, but I usually just end up trying something new.”