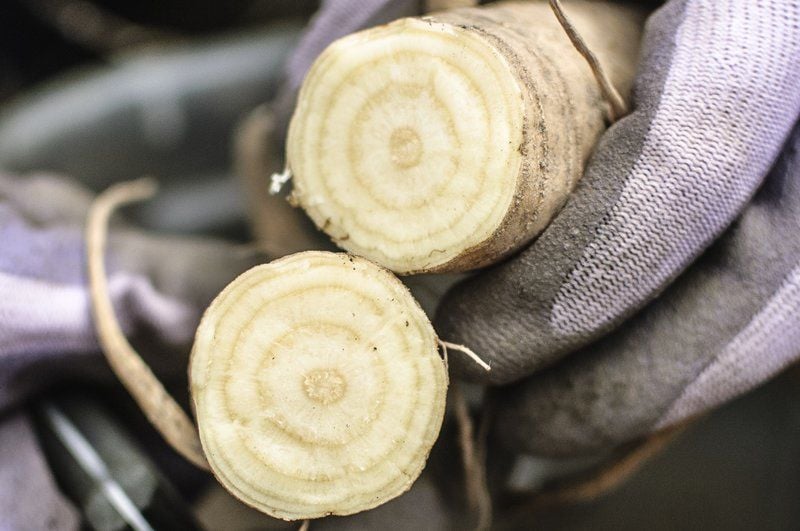 The inside of a fresh Mammoth Sandwich Island Salsify held by Laura Cavendish at the Lord and Lady Farm in Northport. 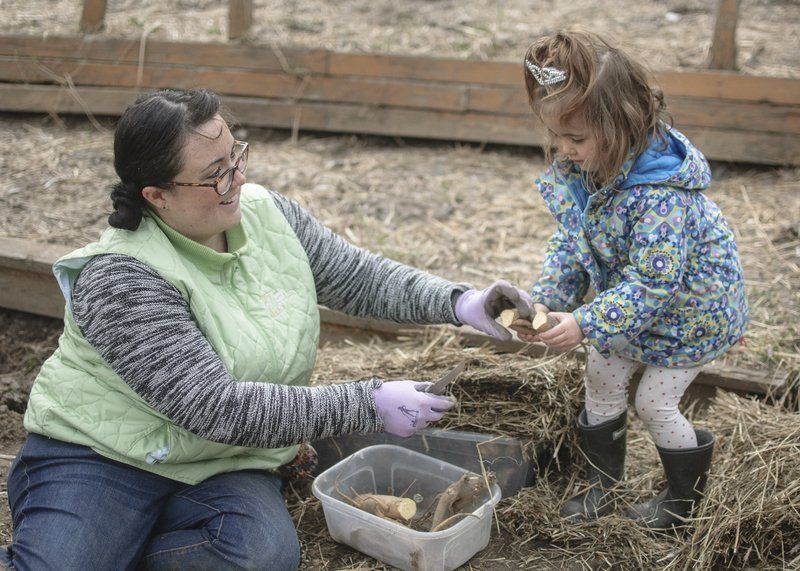 Laura Cavendish hands her daughter Arya, 3, a Mammoth Sandwich Island Salsify at their Lord and Lady Farm in Northport. 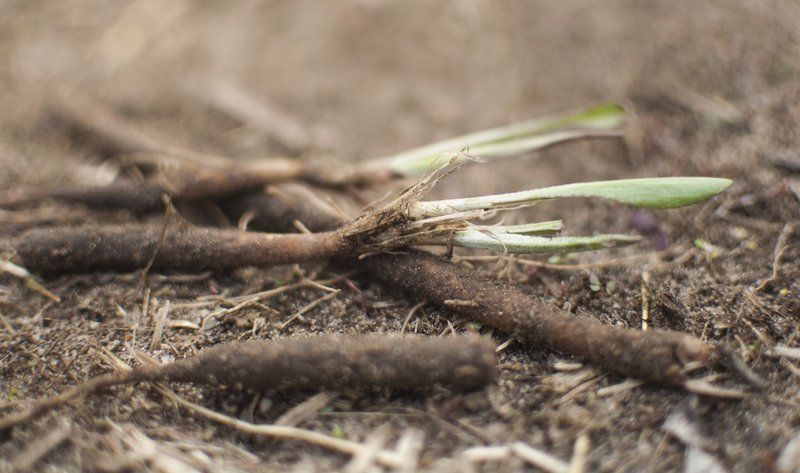 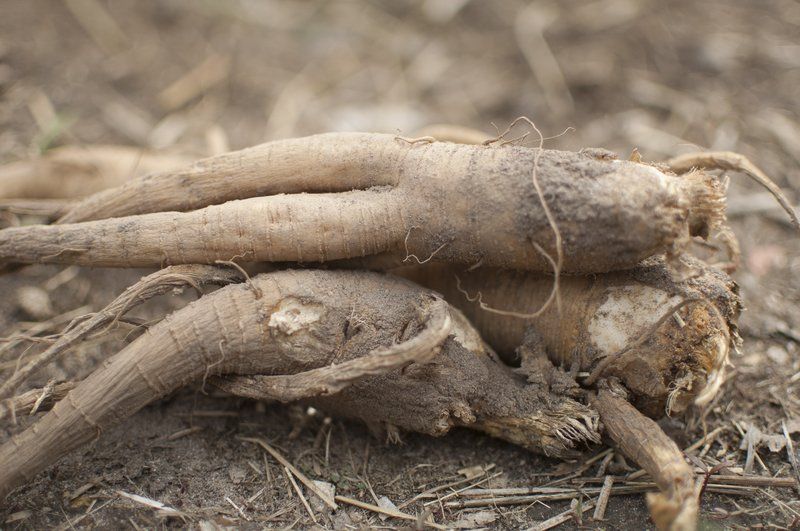 The inside of a fresh Mammoth Sandwich Island Salsify held by Laura Cavendish at the Lord and Lady Farm in Northport.

Laura Cavendish hands her daughter Arya, 3, a Mammoth Sandwich Island Salsify at their Lord and Lady Farm in Northport.

But this spring their shares will include a root vegetable few know how to pronounce, much less prepare and eat.

Salsify, once common in the region, is making a comeback as more area farmers discover its versatility. The edible root, with black or white skin and white flesh, can be boiled, mashed, roasted or fried like a potato or other root vegetables, or steamed and browned in butter.

It also makes a tasty addition to soups and stews and can be made into a rich and creamy gratin with butter, cheese and half-and-half.

“I’ve always just used the black,” said Chef Eric Patterson of The Cooks’ House, who snaps up the root at farmers markets whenever he finds it. “It pairs beautifully with oysters, it’s great braised.”

Susan Odom first saw salsify at Detroit’s Eastern Market and at Greenfield Village, where she was a historical interpreter. Now she grows regular salsify, or the white kind — sometimes called the oyster plant — to eat and serve to guests at her Hillside Homestead inn in Suttons Bay. Guests there experience a farmstay circa 1910, complete with meals made with foods available at the time.

“It does mildly taste like oysters,” said Odom, noting that the flavor is what made early area farmers plant the crop.“In the 19th century there was a fever and a desire and a want for oysters, fresh or canned. People loved oysters all over the nation, even across Europe. Everyone was gaga over oysters. So this plant that mildly tastes like oysters became popular.

“People would take salsify, peel it, slice it into coins and bread it, then deep-fry it in seasoned cracker crumbs or breaded in flour or cornmeal.”

That’s the way Odom served it to a certain celebrity chef.

“Mario Batali has been here for dinner a time or two and I served salsify one time,” she said. “He went bonkers over it.”

The vegetable (pronounced SAHL-seh-fee) fell out of favor when oysters did, but local farmers like the Cavendishes, owners of Lord and Lady Farm in Northport, are slowly bringing it back.

“Personally I like growing anything that’s unusual, unique, and that you can’t find in a grocery store,” Laura Cavendish said. “We don’t grow anything that’s normal. Even stuff that’s considered normal, like tomatoes, it’s weird varieties and heirlooms.”

The modern homesteaders planted a few rows of “Mammoth Sandwich Island” (white) and “Duplex Russian Giant Scorzonera” (black) varieties they grew from organic seed last spring. Then they harvested it in the fall for their CSA shareholder baskets and transplanted the remainder to a new, permanent spot.

“It’s pretty versatile, like parsnips,” said Cavendish, who discovered another patch of white salsify this spring, just in time for June CSA shares. “Because our CSA is unusual stuff, people want to know what to do with it. So we try to provide recipes. I think they liked it. I did.”

Patterson first tried salsify during a long-past apprenticeship and once served it to spring diners at The Cooks’ House.

“It’s one of my favorite plants flavor-wise,” he said, noting that he’s currently looking for suppliers.

Black salsify, also known as Spanish salsify, scorzonera or black oyster plant, is more fibrous and finer in texture than regular, white salsify. But both have thick skins and oxidize quickly.

“You’ve always got to peel it because the skins are thick and unappealing,” Patterson said. “But once you’ve blanched it off, you can roast it, it can be pureed.”

He recommends cooking the root until it’s soft in salted water, then shocking it in cold water and chopping it into lengths of not less than ½-inch and not more than 1 ½ inches. Heat butter in a saute pan over medium heat; once brown, add salsify and saute. Cut the sauteed pieces into smaller segments.

“It goes great with all meats. I’ve used it on pieces of sliced fish,” he said.

Growers can harvest salsify in the fall or leave it in the ground through the winter and dig it in the spring, when the hunger for nature’s fresh bounty is at its strongest.

Odom harvests hers in the fall and stores it in the refrigerator or in a cold cellar without light.

“I’ve never seen a historical way to can it or preserve it," she said. "It’s not as great a vegetable as peas and corn and potatoes and squash. It doesn’t keep as well.

"But I have put it in stews, and that’s nice. I’ll put it in venison or beef stew with carrots, parsnips and potatoes.”

Where to find it

Salsify isn't commonly sold at area farmers markets, but it crops up every now and again. And at least one farmer recently planted it for just that purpose.

Other farmers market starting up across the region include: