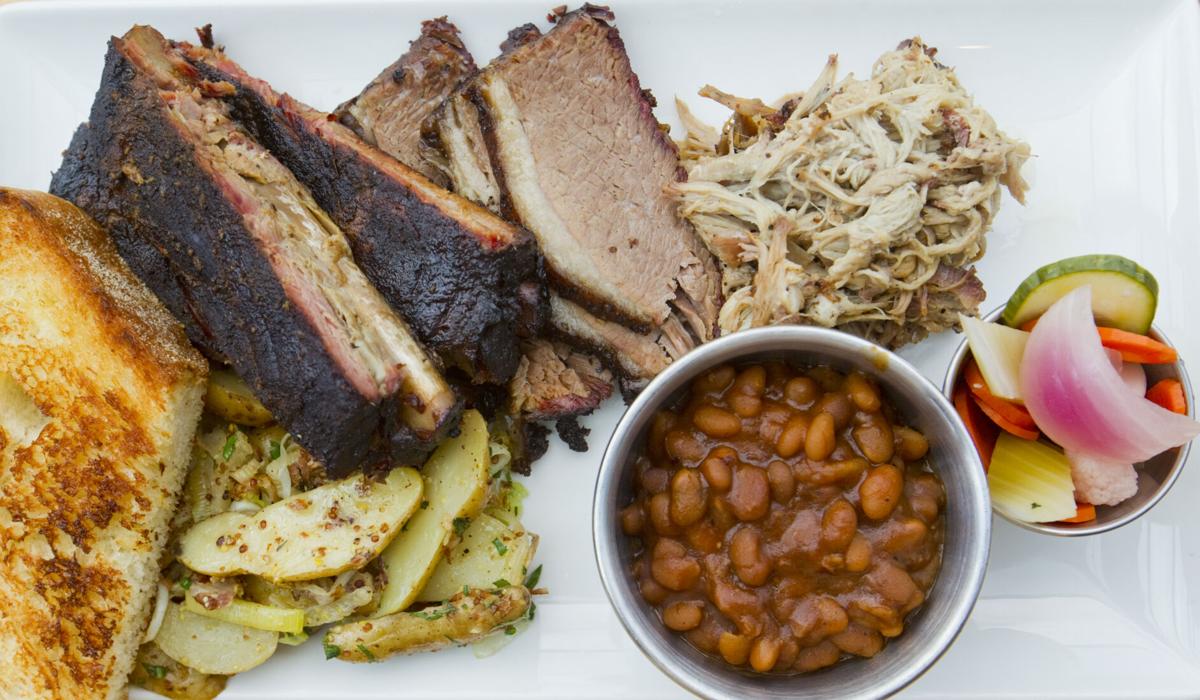 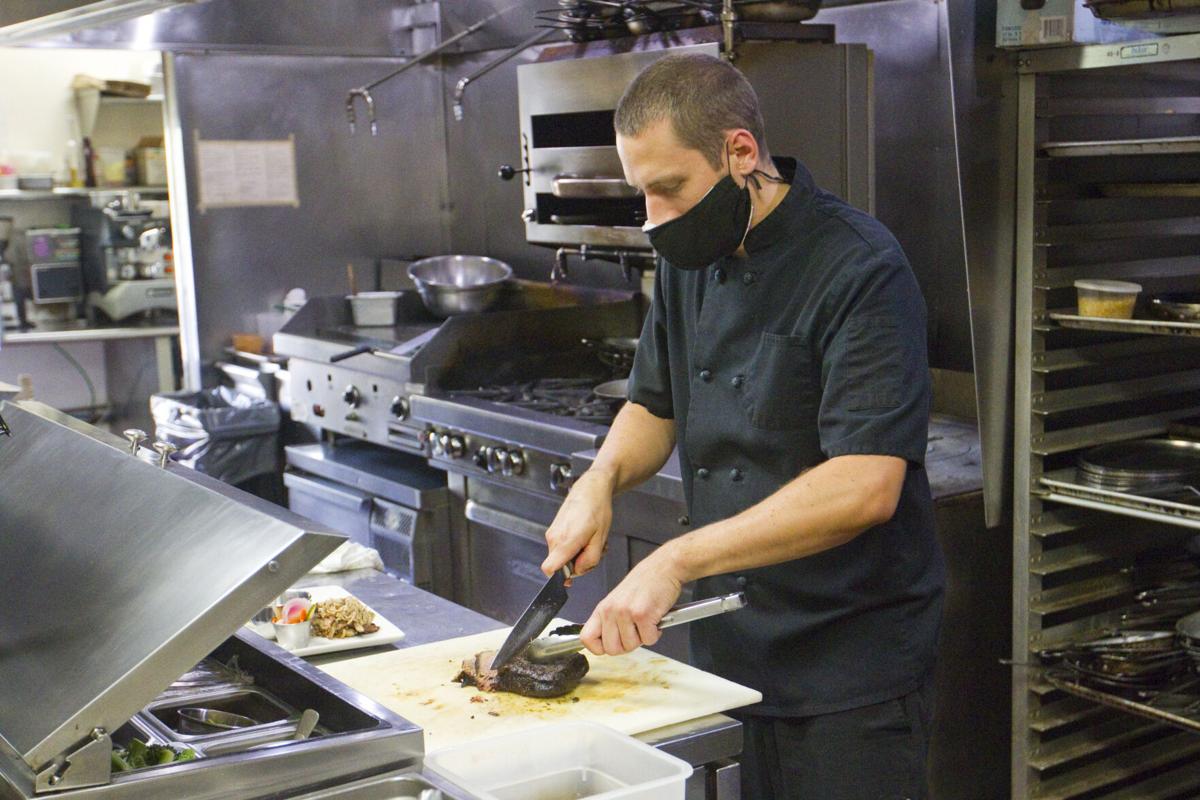 Smoke and Porter owner Henry Bisson prepares ribs in the kitchen of his Traverse City restaurant. 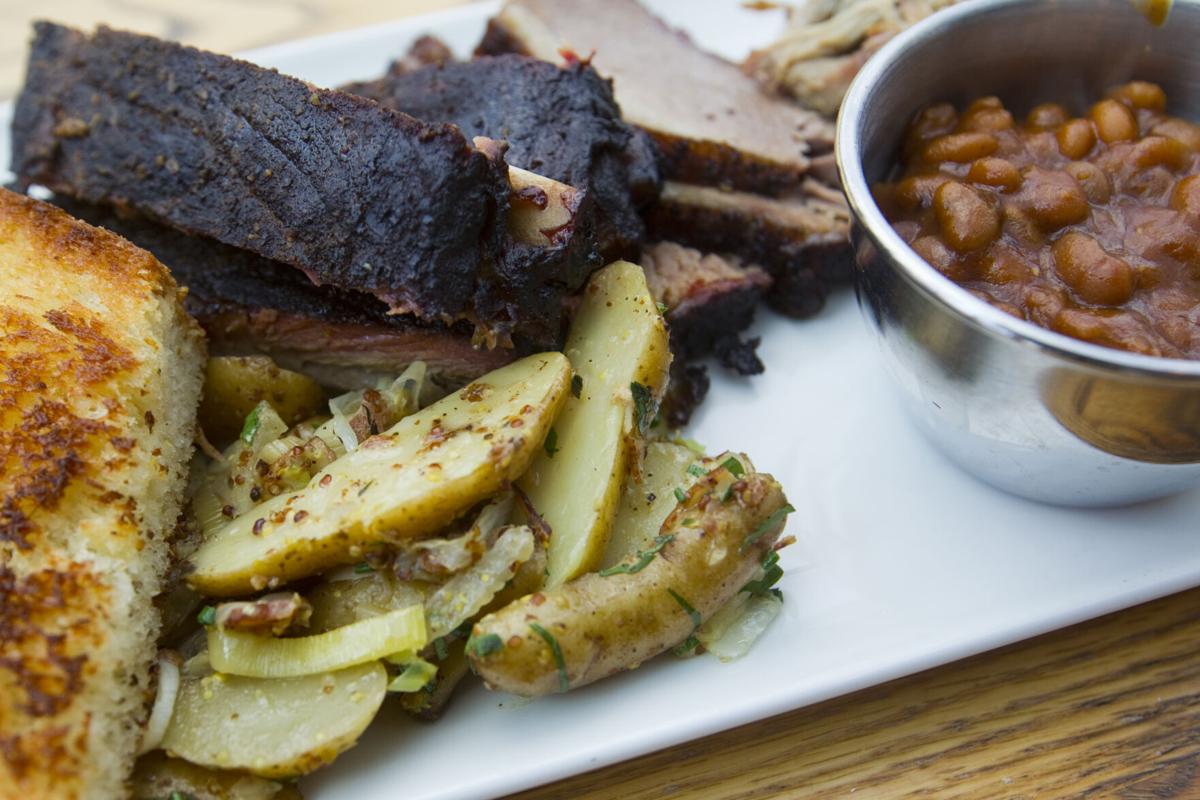 Smoke and Porter owner Henry Bisson prepares ribs in the kitchen of his Traverse City restaurant.

During good years, they’re hosting a barbecue with at least immediate family weekly, right up through Labor Day.

Mazzuchelli’s number one backyard party go-to is the humble chicken. Sometimes he’ll brine the chicken 24-48 hours in a salt and brown sugar mix. The flavoring step is to slap on his seasonings and sauce before charring it up on the grill. Partial to grill marks as well as moist meat, his goal is to have flavor permeating the meat instead of just on the outside.

“This generally pleases a large crowd,” he said of his chicken. “We’ll also do two or three different meats but always the chicken.”

Sides are an important and fun part of any backyard barbecue. Mazzuchelli’s may be simple but they are tasty, varied and disappear quickly. His standard of creamed corn in the Crock-Pot has won devoted fans while tangy mac and cheese is always popular.

In addition, Mazzuchelli offers a number of different slaws, including apple- or carrot-based ones, and varies the dressings from vinegar- to mayonnaise-based. He also makes sure to include pickled vegetables, which pairs well with barbecue meats.

Music, yard games and evening bonfires round out what is often an all-day experience.

“It’s a good thing to be able to get everybody together, especially with the area we live in because you really want to take advantage of it,” Mazzuchelli said.

With a traditional southern BBQ mindset, any backyard gathering for Jared Chappel of TC BBQ means ribs and a full spread of fixin’s.

The meat starts with quality cuts such as pork ribs, beef ribs or rib-eye smoked on the bone — the latter he calls “crazy good.” His flavoring is essentially Texas style using salt, pepper and a touch of garlic powder as a simple rub. Chappel taps fruity woods like cherry, apple or pecan because to him smoke is for flavoring, not just cooking.

“I like sauces but I also like the meat to shine through,” said Chappel, the pitmaster at TC BBQ, which opened in the State Street Marketplace last October.

Besides the ribs, his guests can devour hot dogs, chicken, pulled pork and brisket. Sides include beans, potato salad, slaw and cornbread with lots of butter, honey and strawberry preserves.

Dessert offerings might feature Dutch apple pie with a crumb top finished either with a slice of cheddar or a la mode. Another home dessert favorite is a deep-fried Twinkie topped with powdered sugar and drizzled chocolate syrup.

“It’s just glorious,” he said of the Twinkie confection, an item he’s considering for TC BBQ.

Chappel’s casual backyard gatherings flow from his determination to make the whole experience enticing for guests.

“When I put on a backyard picnic, I want it to shine like I was serving the president and everyone in between,” he added.

Weighing in with a lighter philosophy about backyard barbecue staples is Henry Bisson, the owner and chef at Smoke & Porter. Bisson turns to the sea for his backyard feasts: grilled shrimp, clams or mussels, oysters Rockefeller or smoked, butter-poached lobster tails, which are delicate with a smokey flavor.

To him, the definition of barbecue can be stretched any way you want.

“A grilled seafood platter type of thing is a lot of fun,” Bisson noted. “It’s outside the boundaries, a fun thing that most people don’t think about.”

Another Bisson household go-to for backyard BBQs is poultry, which keeps prep and cook time simple. Duck or chicken cook fast and he prefers moist dark meats over dryer poultry breasts. He has been known to throw some Andouille sausages on the grill for a little variety.

The bottom line is to keep things simple instead of making a huge number of dishes.

“I don’t want to spend all day at the grill unless my buddies are coming over and we’re doing it all together,” he said.

“If I had the luxury of making smoked duck legs here and heating them up on the grill when my friends are over, I’d do that,” Bisson added.

Grilling can boost desserts as well. Bisson has topped cheesecake or a gooey St. Louis-style cake with grilled peaches.

“Peaches are a nice, tender fruit that don’t need that much time on the grill,” he said.

Place half pound of the corn in a blender with the heavy cream and blend until smooth. Add all ingredients to crock pot and cook on low for hours or high for less time, stirring occasionally.