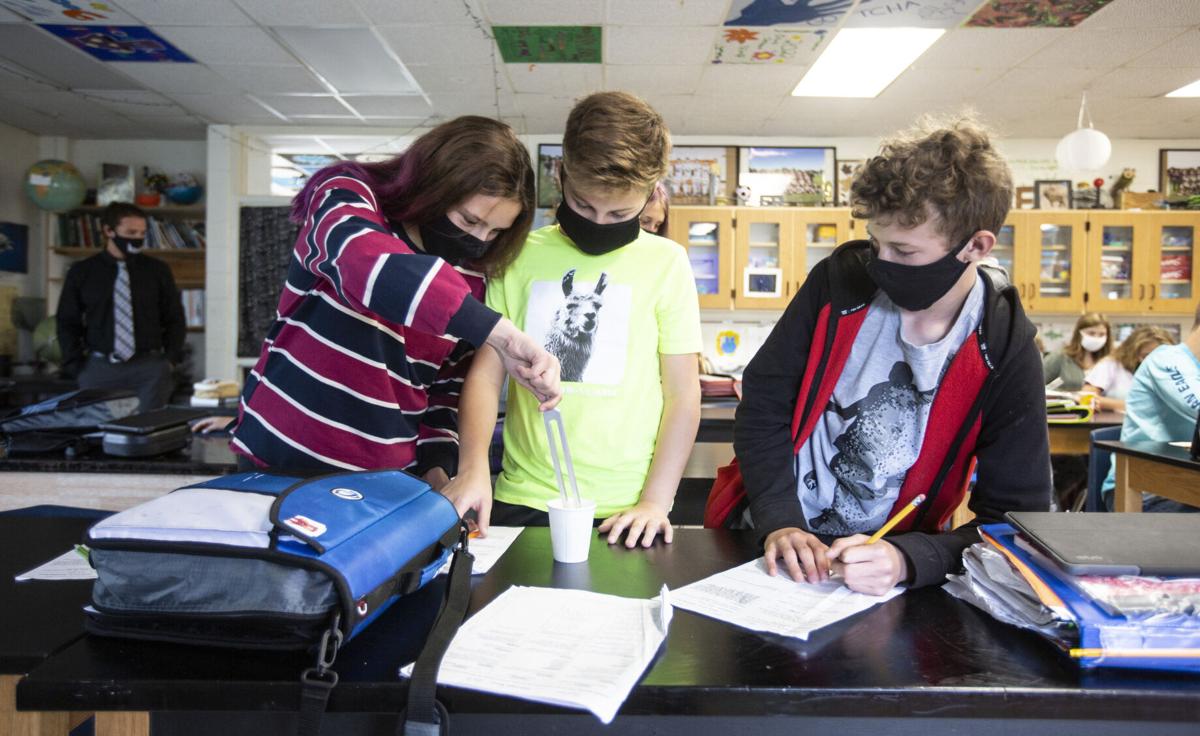 From left, Kaira Beauchamp, 13, Hunter Hall, 13, and Skyler Fraley, 13, watch as Beauchamp dips a tuning fork into a cup of water at Cherryland Middle School in Elk Rapids on Wednesday. 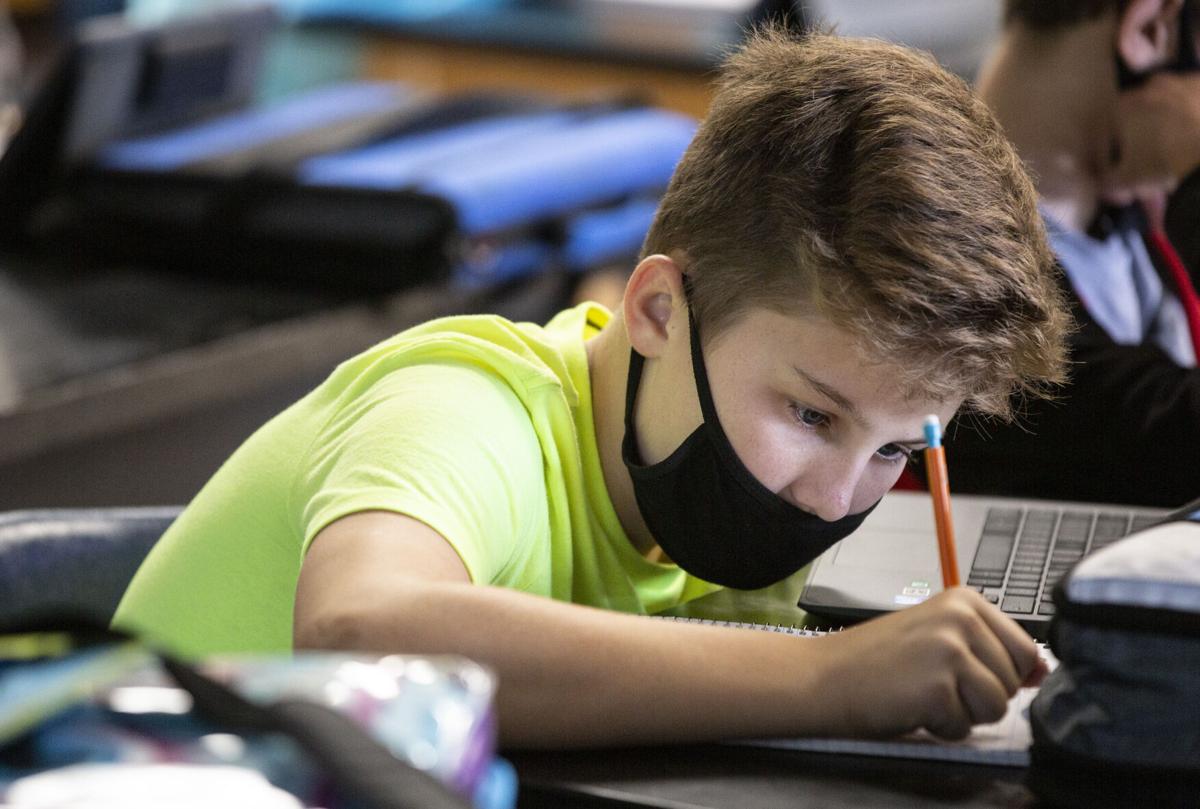 Hunter Hall, 13, works on a science assignment at Cherryland Middle School in Elk Rapids on Wednesday. 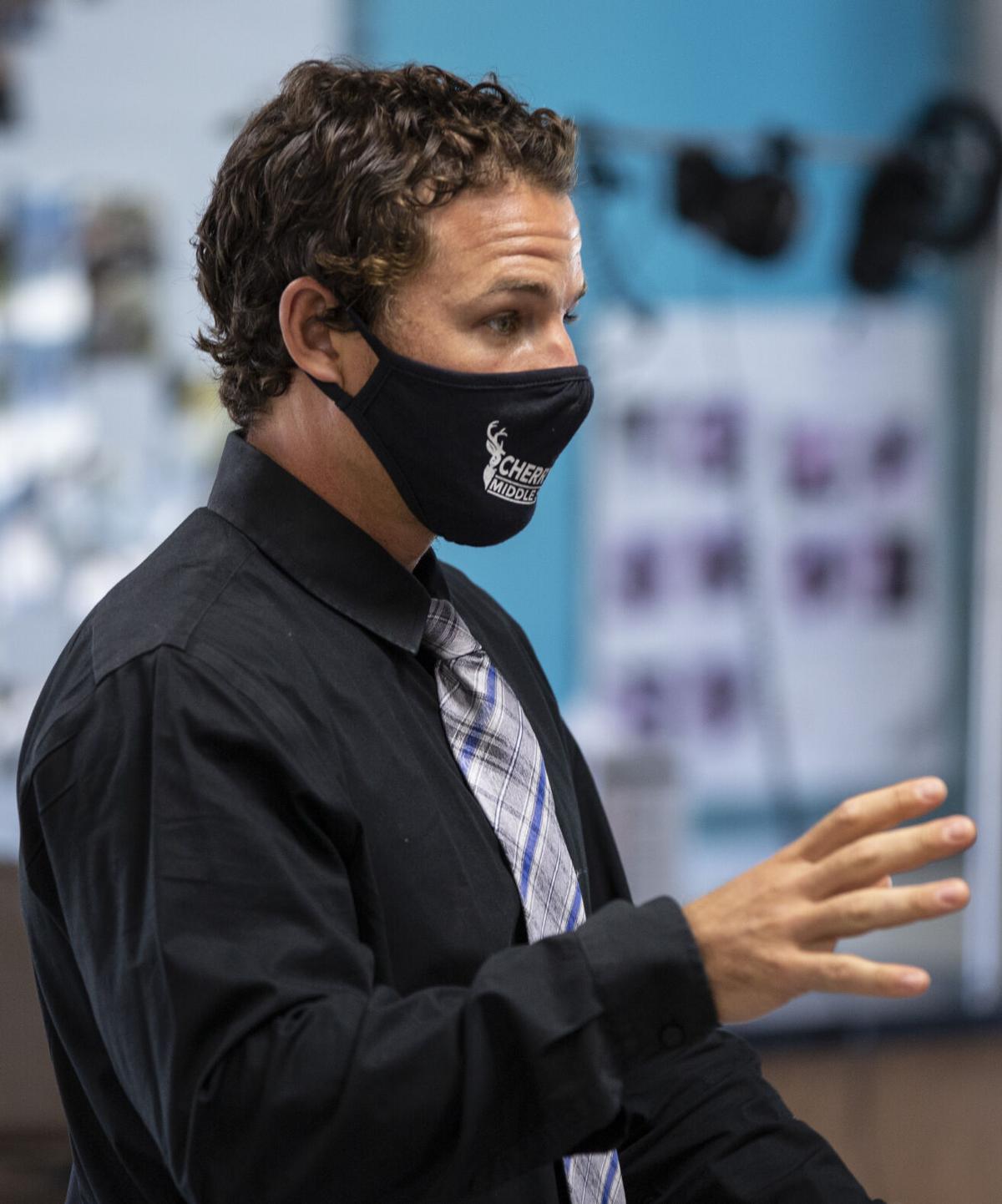 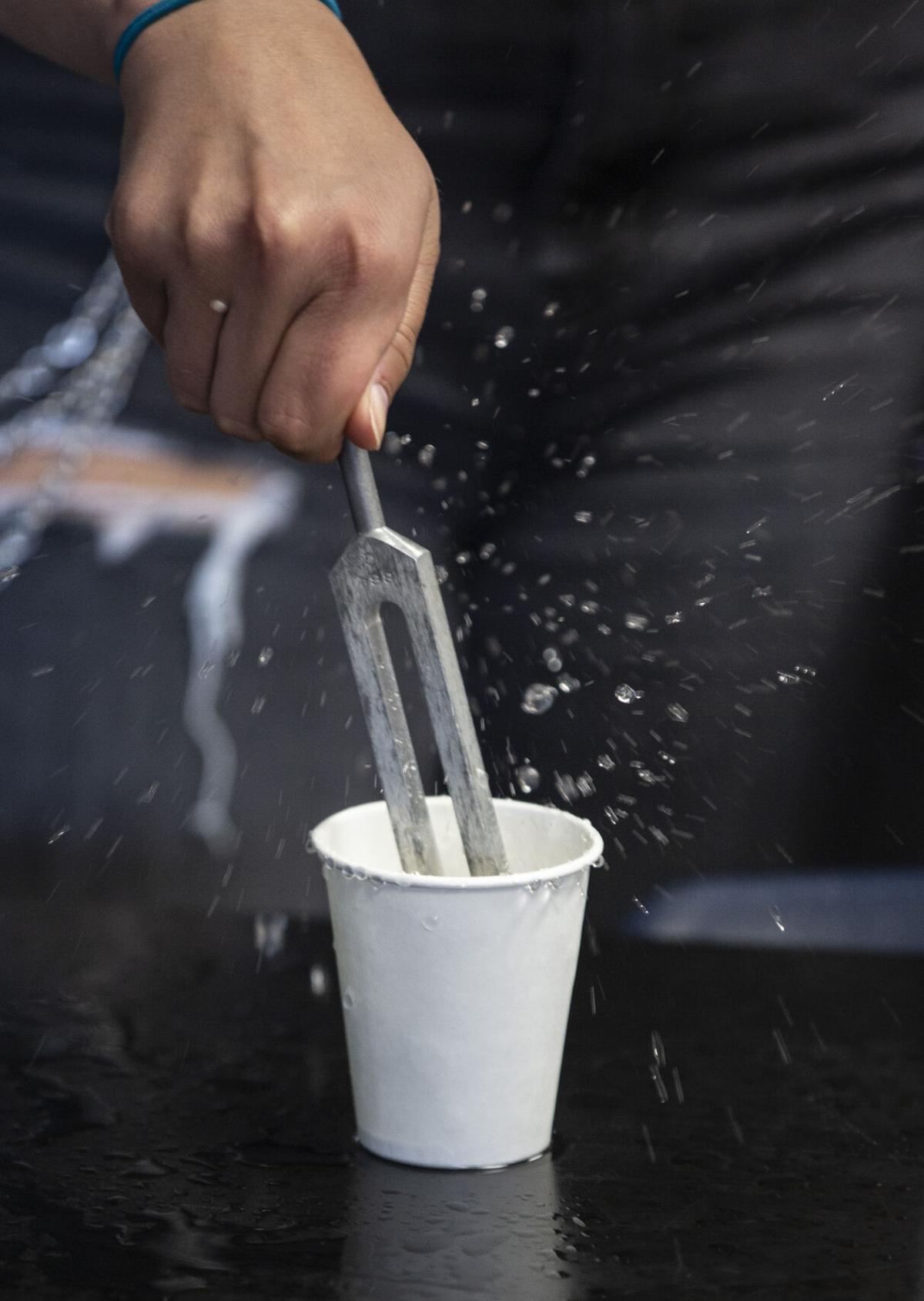 A student dips a tuning fork into a cup of water during a science class at Cherryland Middle School in Elk Rapids on Wednesday. 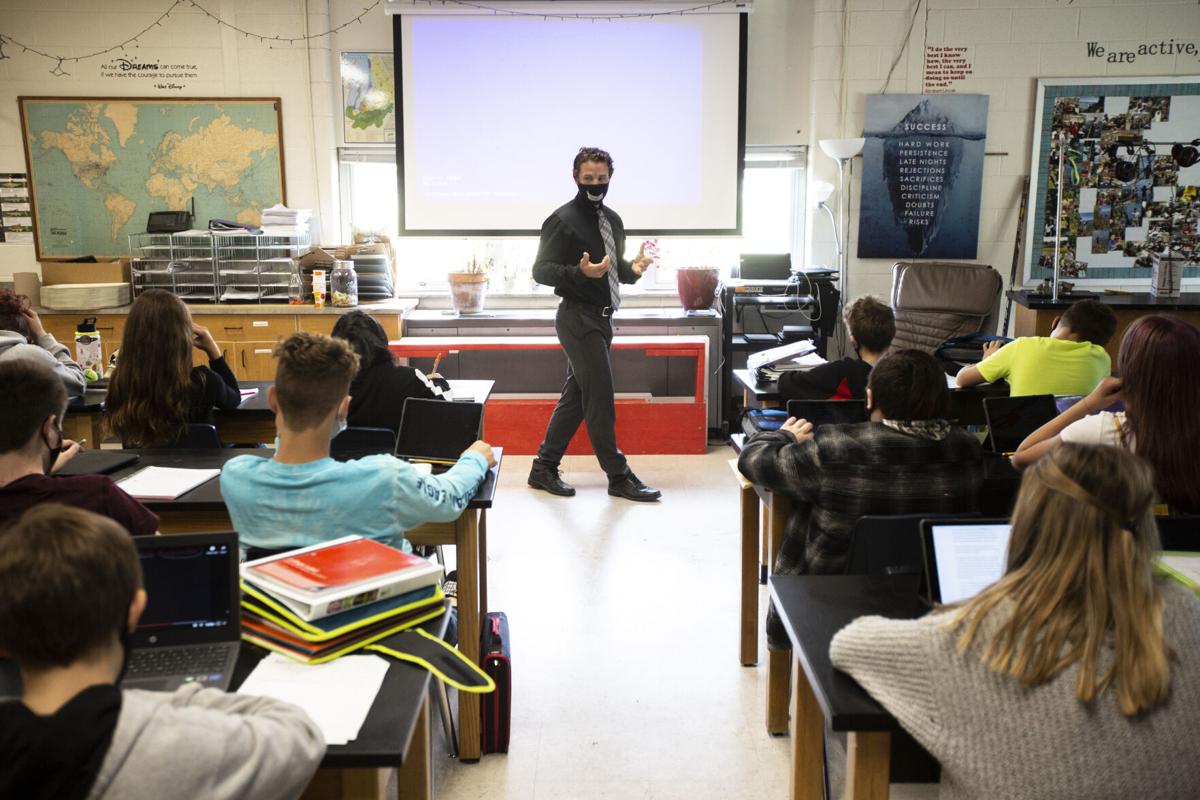 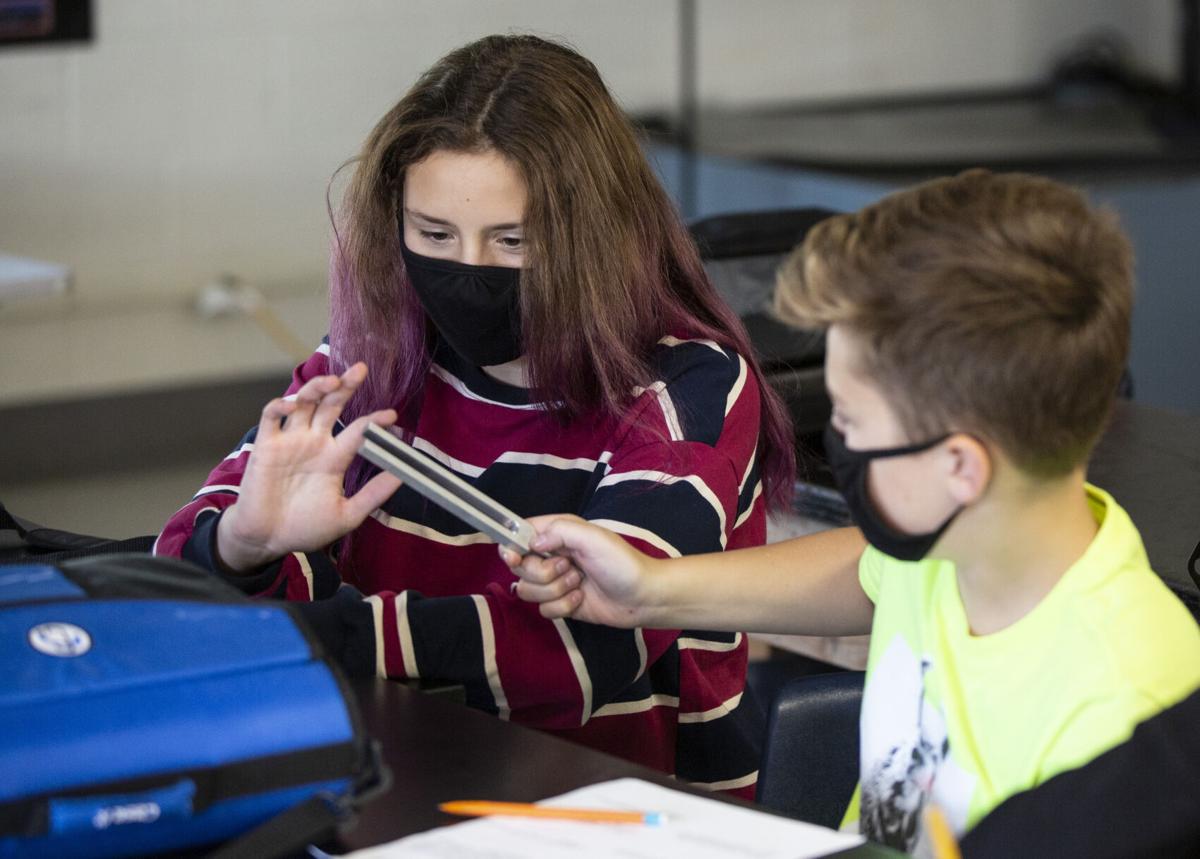 From left, Kaira Beauchamp, 13, Hunter Hall, 13, and Skyler Fraley, 13, watch as Beauchamp dips a tuning fork into a cup of water at Cherryland Middle School in Elk Rapids on Wednesday.

Hunter Hall, 13, works on a science assignment at Cherryland Middle School in Elk Rapids on Wednesday.

A student dips a tuning fork into a cup of water during a science class at Cherryland Middle School in Elk Rapids on Wednesday.

ELK RAPIDS — When Kwin Morris came back to Cherryland Middle School, everything was “exactly the same.”

Morris went through the Elk Rapids Public School system from kindergarten to high school graduation. He said the nostalgia of returning was a nice trip down memory lane — but some of the luster has worn off in his four-plus years as a seventh- and eighth-grade science teacher at Cherryland.

Morris loves teaching at Cherryland, but he doesn’t love the outdated and deteriorating infrastructure, the lack of space and necessary amenities for his class.

Morris is crossing his fingers and hoping Cherryland will change — for the better — if and when voters pass the district’s $50 million bond request.

“The kids deserve an education that meets the 21st century demands,” Morris said. “This school is old, and this bond is going to be huge for the students.”

ERPS officials yanked the proposal from the May ballot because of the COVID-19 pandemic, but the measure has new life on Nov. 3.

The 30-year, $50 million bond would be spent on upgrades and renovations at the district’s two elementary schools, middle school and high school during the next five to seven years.

The bond does come with a tax increase, but it is different than the previously proposed hike.

Since May, the tax rate for ERPS decreased from 1.2 mills to .05 mills after the district paid off its qualified bonds and loans.

The proposed 1.55 mill increase would bring the annual rate to 1.6, which is lower than the 1.68 rate proposed last time. Homeowners would pay an additional $155 per year per $100,000 of the house’s taxable value.

Although Julie Brown is just days into her official tenure as Elk Rapids superintendent, she said she is encouraged by the momentum the two-year campaign is building with less than a month to go.

“Being able to get this under our belt and start thinking about the future and planning for the kids is going to help move along the mission and the vision of the district,” Brown said.

Brown said tax increases are always a hurdle, adding school bond proposals “historically, do not do well in November.”

“There’s the perception that there are differences between wants and needs,” Brown said. “These are needed.”

The projects and needs are the same. Cherryland and the high school will receive the biggest improvements.

Cherryland was built in 1950 and last remodeled in 2004. The oldest wings of the school will be rebuilt along with construction of a learning commons area and new classrooms. Some high school classrooms will be renovated and others will be updated.

A new gymnasium will be built along with four tennis courts and improvements to the school’s performing arts infrastructure.

Charles Egeler finds himself on the fence about the bond.

The business owner in downtown Elk Rapids wonders if the proposal has more wants than needs.

Egeler also said the “vast majority” of senior citizens in Milton Township have previously voted against school bonds “just because the tax increase is a burden.”

“I’ve got to make my decision, but I am 68 years old and I’m looking at retiring at 70,” he said. “Of course I don’t want high taxes, and I’d be leaning more toward voting for it if there weren’t those extras like the new gymnasium.”

Trisha Moore, information officer with the committee to pass the bond, said approving the bond is in the best interest of the students, teachers and community.

Moore said the pandemic had its benefits and drawbacks to the campaign. She felt more families understand the need for quality facilities after having to teach students at home. However, the inability to have community meetings or public forums made it more difficult to spread the word.

Moore said the campaign is working on the “outlying communities” to garner support from taxpayers who don’t have children in ERPS. She and other proponents worry about the “snowbird” votes — those who spend winters away from Elk Rapids in favor of sunnier climates — going against the bond.

“I never want to feel like it’s a sure thing, because it’s not,” Moore said.