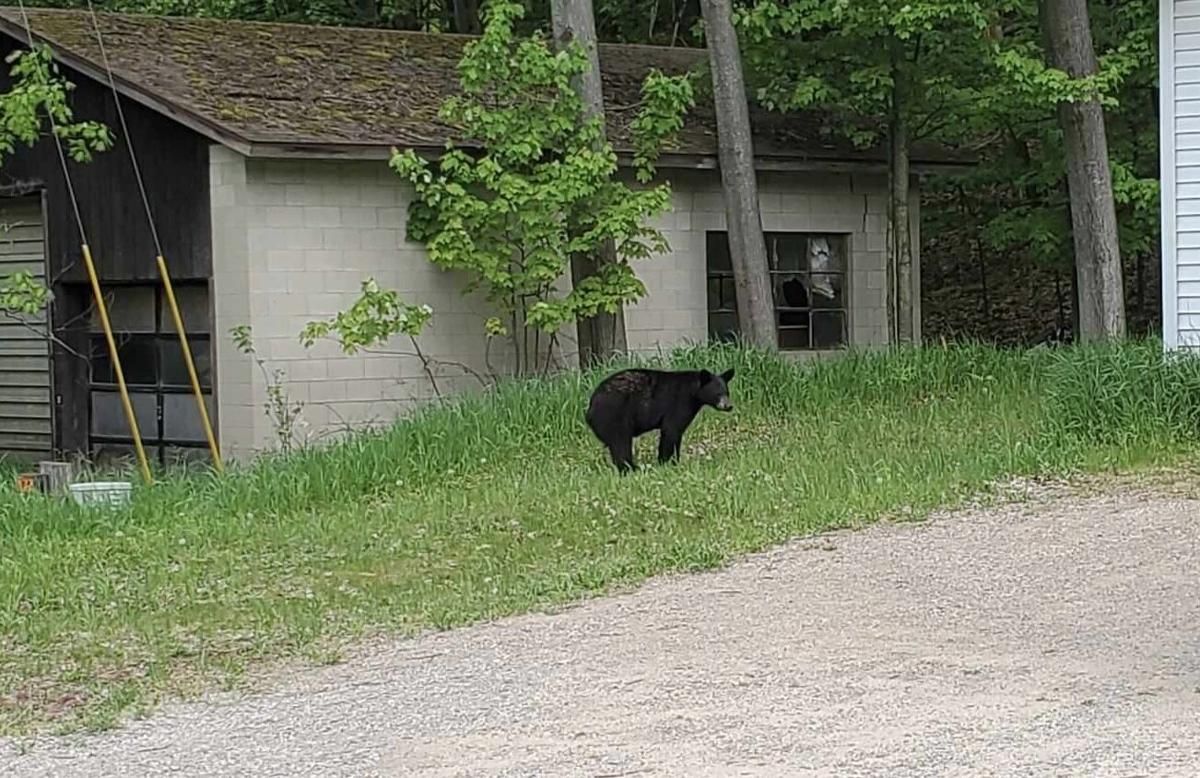 A small black bear in Holiday Hills was photographed by Glen Lile during one of his recent daily walks up and down Holiday Road. 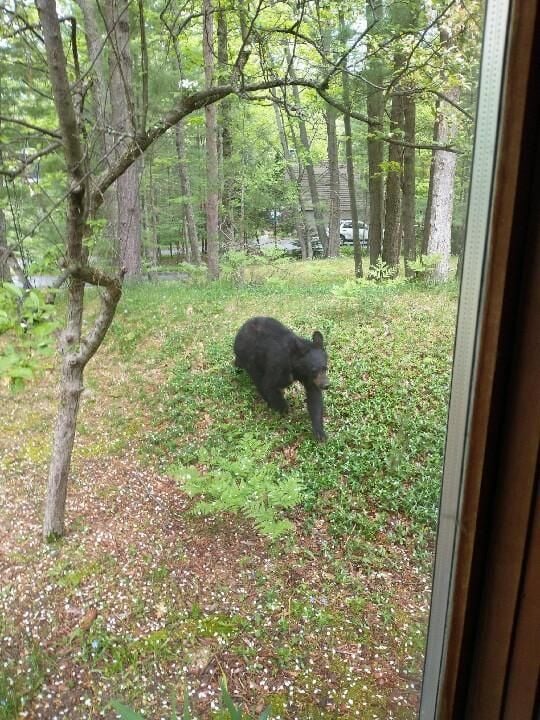 Beth Urban recently photographed this black bear out a window of her Holiday Hills home. 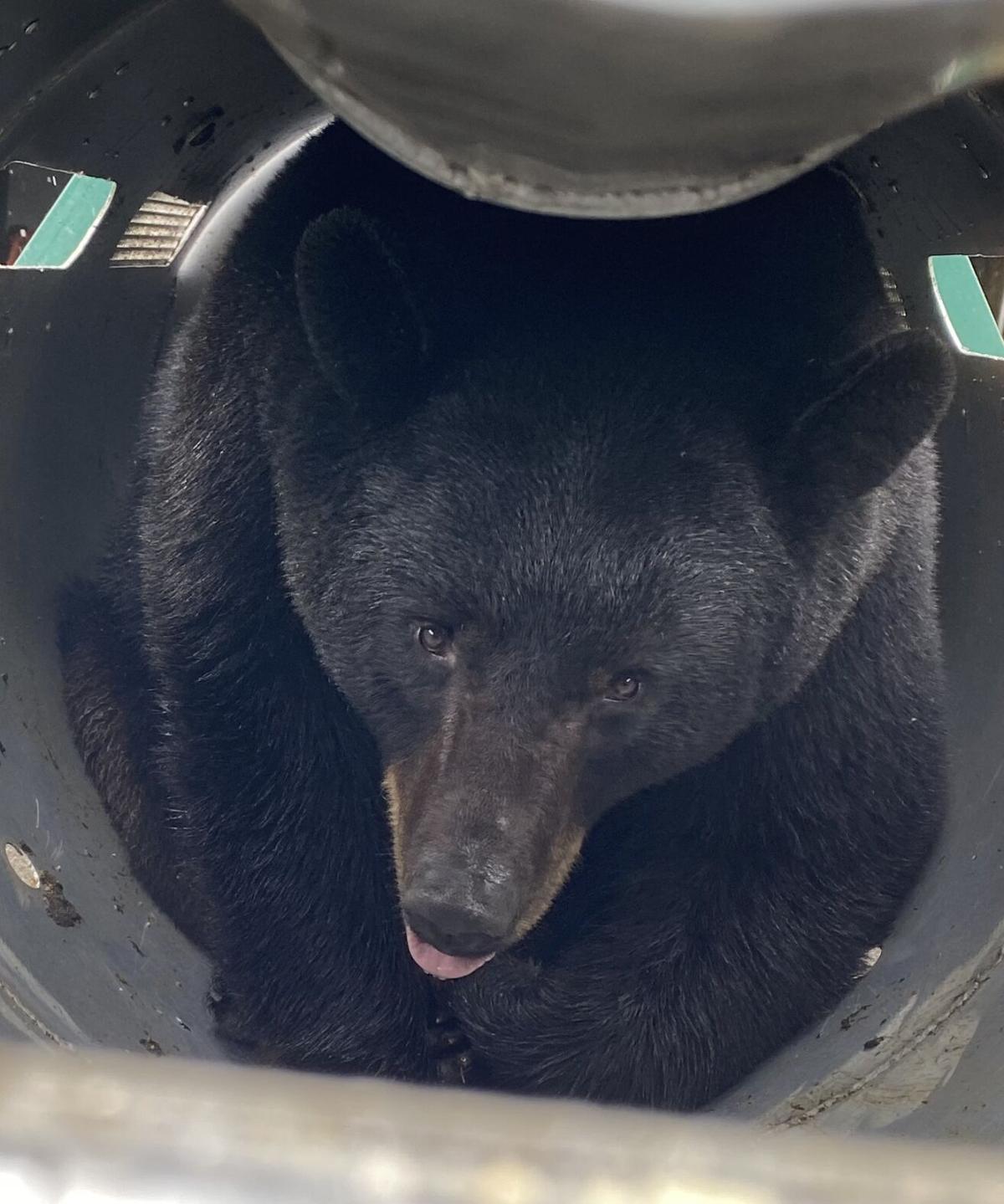 The Michigan Department of Natural Resources in April trapped this black bear in Garfield Township near Oryana West and Creekside Condominiums.

A small black bear in Holiday Hills was photographed by Glen Lile during one of his recent daily walks up and down Holiday Road.

Beth Urban recently photographed this black bear out a window of her Holiday Hills home.

The Michigan Department of Natural Resources in April trapped this black bear in Garfield Township near Oryana West and Creekside Condominiums.

TRAVERSE CITY — The bear came back. The very next month.

State wildlife officials in April trapped a black bear notorious for raids on bird feeders and trash cans on Traverse City’s west side. They gave the bruin a lip tattoo, some ear tags, removed a tooth to determine his age, fitted him with a radio collar and carted him in a metal, tube-shaped trap 90-some miles away to nearly Alpena to release him.

“For some reason he likes the Lake Michigan coast,” said Steve Griffith, DNR wildlife biologist from the Traverse City office.

This bruin is the sole male of the species with a radio collar in Michigan; all the others are sows in the state’s orphaned cubs adoption program.

But Griffith said the male bear’s return is likely less to do with Michigan’s sunset coast and more to do with learned habits on familiar territory. Most black bears avoid humans, but this one seems unbothered by proximity to people if it means easy-to-come-by meals, he said.

“He’s got a sweet tooth or a lazy bone or I don’t know what,” Griffith said, laughing.

The bear’s reputation is to raid trash cans and bird feeders, slurping down every suet block found across Traverse City’s west side. But it’s “being well-behaved” during the saunter back to Grand Traverse County, Griffith said.

A couple of sightings of the ear-tagged bear have been phoned in by up north residents, he said, but no problems have been reported regarding birdseed feeders or trash can destruction.

The biologist said there’s been talk among state wildlife officials about re-capturing the bear and relocating it as far away as into the Upper Peninsula, should it become a marauder again. But there are wildlife disease factors to consider in that equation because the Straits of Mackinac form a natural barrier between Upper and Lower Michigan for black bears, he said.

Euthanizing the bear would be a last resort, Griffith said, and placement at wildlife preserve would be preferable before that.

Biologically, it’s an astonishing characteristic of wild animals to be able to navigate themselves back to preferred territory, he said, as this particular bear has done.

Traverse City’s birdseed bandit isn’t the only bruin on the move right now.

Griffith said wildlife officials are receiving a lot of calls about bear sightings and run-ins. There likely is some substance to anecdotal reports of more-than-normal bear activity in the region, he said.

A bear was photographed in a suburban front yard in Holiday Hills. Bears were spotted in recent weeks southeast of town near the Brown Bridge Quiet Area. Elk Rapids Police even warned of a bear loafing around an in-town neighborhood in the middle of the day Thursday.

Griffith said birdseed is a major attractant for bears, and they can even smell its past presence in empty bird feeders — why feeders should be brought indoors, not just left empty.

“And they will definitely smell outdoor grills and, of course, trash and even pet food left outside,” he said.

Complicating this time of year are bear sows that have chased off their yearlings, especially the males, which often find themselves being chased away by other bears with established territories, Griffith said.

“They are being bounced around, looking for a place to call their own,” he said, adding they won’t pass up an easy meal if they are hungry enough.

Glen Lile said for the first time in 49 years of living in Holiday Hills he recently came across a black bear while out walking his neighborhood, a daily habit he’s kept for about the last seven years.

“I walk from one end of Holiday Road to the other end and back again,” he said.

Lile said he enjoys watching for wildlife along his exercise route, often snapping photos of deer that wander through the area. He was looking off toward the hillside as he walked along and when he turned his head back straight ahead, there was a small bear standing near a house about 50 feet away from where he stopped dead in his tracks.

“It was pretty exciting, let’s put it that way,” Lile said, adding that he used his mobile phone to snap a couple of photos.

“About that time he decided to run up the hill,” Lile said. “It was very exciting to see and I didn’t really feel threatened.”

Lile later remembered he had pepper spray with him that he carries in case aggressive dogs chase him, “but I never thought of that until the whole thing was over,” he said, laughing.

Lile said he’s bringing in his birdseed feeders every night to reduce the risk of the bear returning to his part of the neighborhood.

Griffith said DNR wildlife managers have requested an increase in hunting licenses for black bear in the Baldwin bear management unit. That unit includes Benzie, Leelanau, Grand Traverse and parts of Kalkaska counties, as well as the areas stretching south along the Lake Michigan coast through Muskegon County.

“Our goal for the near future is to have zero population growth to stabilize the population,” Griffith said.

Rachel Leightner, DNR wildlife outreach coordinator, said Michigan is home to approximately 12,000 black bears: 10,000 in the Upper Peninsula and 2,000 in the Lower Peninsula.

Statistics show hunters took 1,726 bears during last year’s hunt, up from 1,680 killed during the hunt in 2019. Both years 7,080 licenses were awarded through a lottery to hunters and this year only 7,001 licenses will be issued, Leightner said.

Michigan’s black bears tend to live about 10 years, with males typically roaming a 100-square-mile area and females sticking to smaller, 20-square-mile territories. Bears are omnivorous and prefer large, continuous hardwood and conifer forests as habitat; females can grow to 250 pounds and males as much as 400 pounds.

Beyond food that bears glean from humans, they feed on skunk cabbage, sedges and grasses, while fruits and berries are key to their summertime diet. Bruins will feast on insect larvae such as ants and beetles, and will even eat roadkill and other carrion.

Poll: Have you seen — or found evidence of — a bear near your home this year?