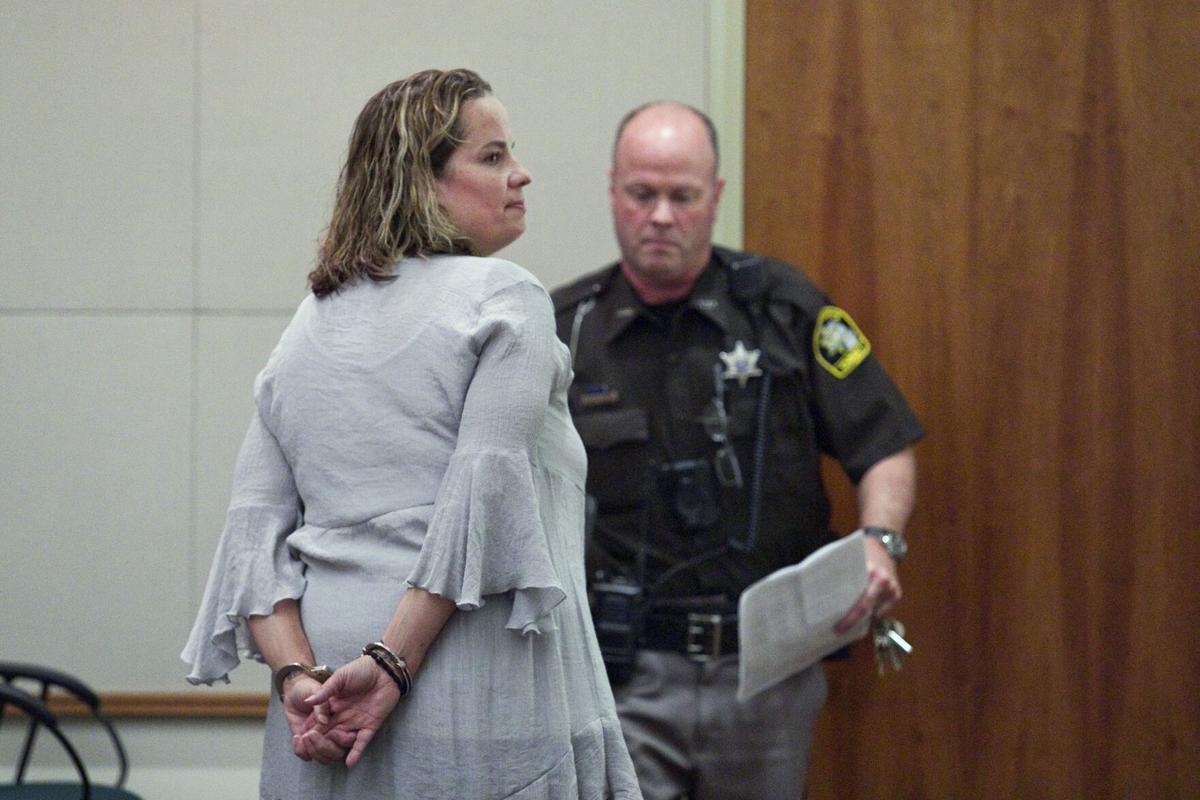 Elise Page looks back at family members as she is led away after being sentenced to 11 months in jail for embezzlement from a vulnerable adult on Monday in Petoskey. 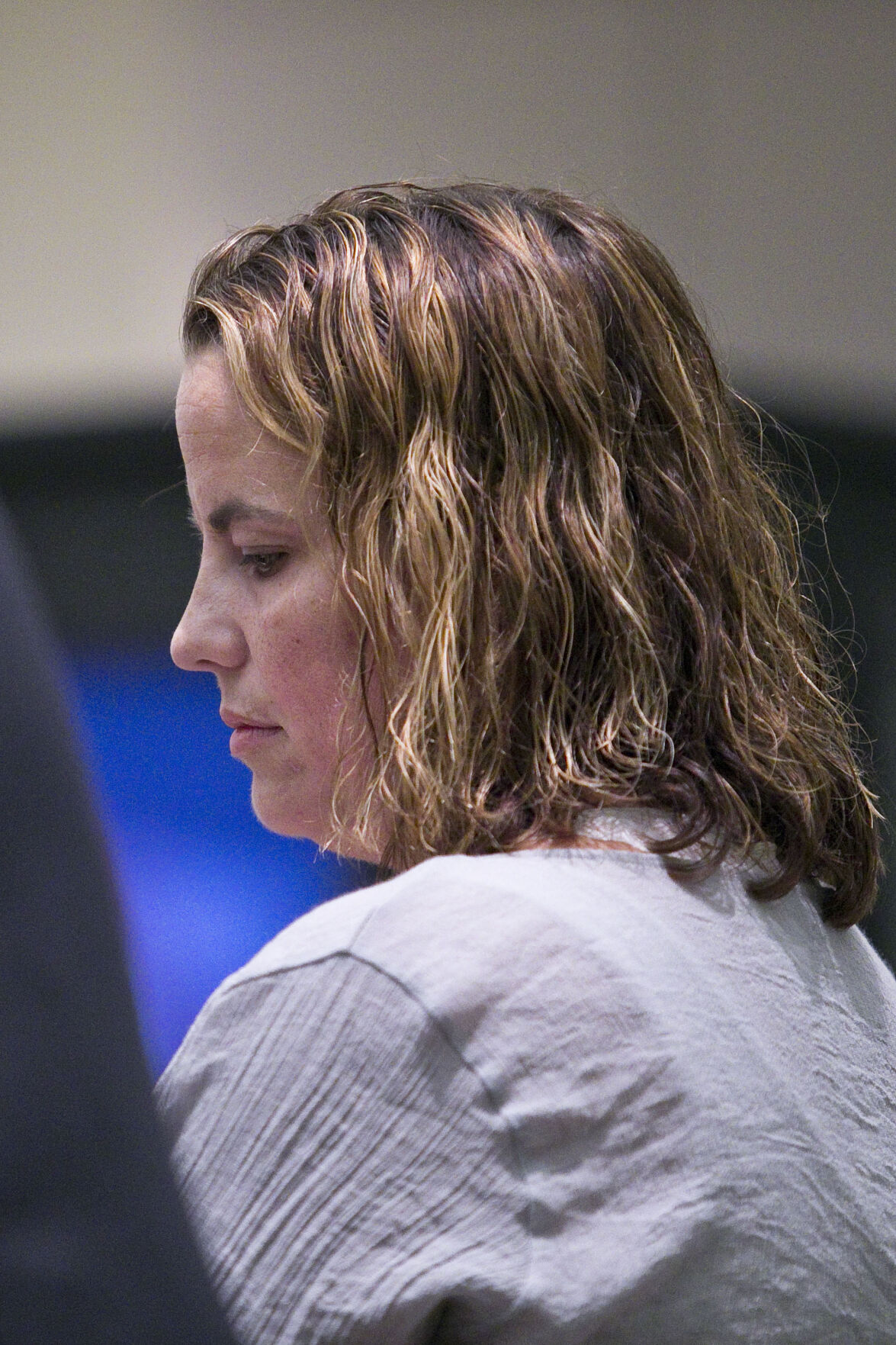 Elise Page was sentenced to 11 months in jail for embezzlement from a vulnerable adult on Monday in Petoskey.

Elise Page looks back at family members as she is led away after being sentenced to 11 months in jail for embezzlement from a vulnerable adult on Monday in Petoskey.

Elise Page was sentenced to 11 months in jail for embezzlement from a vulnerable adult on Monday in Petoskey.

PETOSKEY — A court-appointed conservator who last month pleaded guilty to two counts of felony embezzlement from a vulnerable adult was sentenced to 11 months in jail.

Elise Page, of Harbor Springs, is accused of embezzling more than $17,000 from bank accounts belonging to two vulnerable adults assigned to her by the Emmet County Probate Court.

The missing funds came to light last fall during a months-long investigation by the Harbor Springs Police Department and the Petoskey Department of Public Safety.

“You are now a person from whom people must be protected,” said Judge Angela Lasher. “And not just people, but vulnerable people.”

Page’s attorney, Jonat- han Steffy, had asked for probation or a delayed sentence at Monday’s hearing in 57th Circuit Court, which Lasher declined.

Page read a prepared statement where she expressed an interest and willingness to make amends and said her own mental health challenges with depression caused her to “use money to go down a bad road.”

Money went missing from accounts owned by George Pappas, a 95-year-old World War II veteran who lives in Harbor Springs and Isiah Gill, a disabled adult who lives in Petoskey, within months of Page being assigned to handle their finances, court records show.

Pappas attended the sentencing hearing and addressed the court.

“My wife worked 30 years to earn money and this person took advantage of that, blood money, for her prosperity and her hunger,” said Pappas, whose wife, Geneva Pappas, worked at Bell Telephone and died in 2019.

Pappas’ bank records show Page transferred money out of his bank account and into an account at a credit union, then traveled to Traverse City and Petoskey where she spent money at vape shops, Victoria’s Secret, JoAnn Fabrics and several fast food restaurants.

“She slipped through the courts and I blame the credit union for sleeping while she was doing this,” Pappas said, of Page’s ability to dodge court oversight and open a new account without his knowledge.

Conservators are appointed by the probate court to administer a person’s financial affairs when, because of age, injury or illness, a judge decides they are no longer able to handle such tasks themselves.

A related court appointment, a guardianship, is made by the court when a judge determines someone cannot handle their own housing or medical decisions.

Systemic oversight deficiencies of probate court appointments have been acknowledged by lawmakers for decades.

Most recently the problems surfaced in hearings before the state’s House Judiciary Committee, where Attorney General Dana Nessel and others gave testimony on proposed reforms.

Michigan law states a probate court judge can appoint anyone they like to be a conservator or a guardian, so long as the person is older than 18 and “competent,” though critics of the system say the term is not well defined.

Each probate court sets many of its own procedural rules and there is no requirement that a guardian or conservator disclose whether they have appointments in other counties. Critics say this makes it more difficult to identify conservators and guardians unfit to serve.

Without such a requirement, Emmet County officials had no way of knowing, for example, that Page had been appointed to serve as conservator for at least two vulnerable adults in Cheboygan County.

Steffy, who declined further comment, said on Monday that Page was being sentenced for the Emmet County cases only and as yet no charges had been filed in Cheboygan County.

Michigan does not require certification or background checks of guardians or conservators — an oversight that proposed legislation, if passed, might remedy but only if expanded to include civil litigation.

An investigation by the Record-Eagle, however, revealed a history of financial lawsuits filed against Page in Emmet County’s 90th District Court going back to 2004.

Page pleaded guilty to two felony counts of embezzlement of more than $1,000 and less than $20,000, from a vulnerable adult, which each carried a maximum sentence of up to five years in prison.

Page must also pay restitution of $17,333.88 as part of the plea deal, court records show.

In exchange for the plea agreement, several charges of embezzlement and using a computer to commit a crime were dismissed, records show.