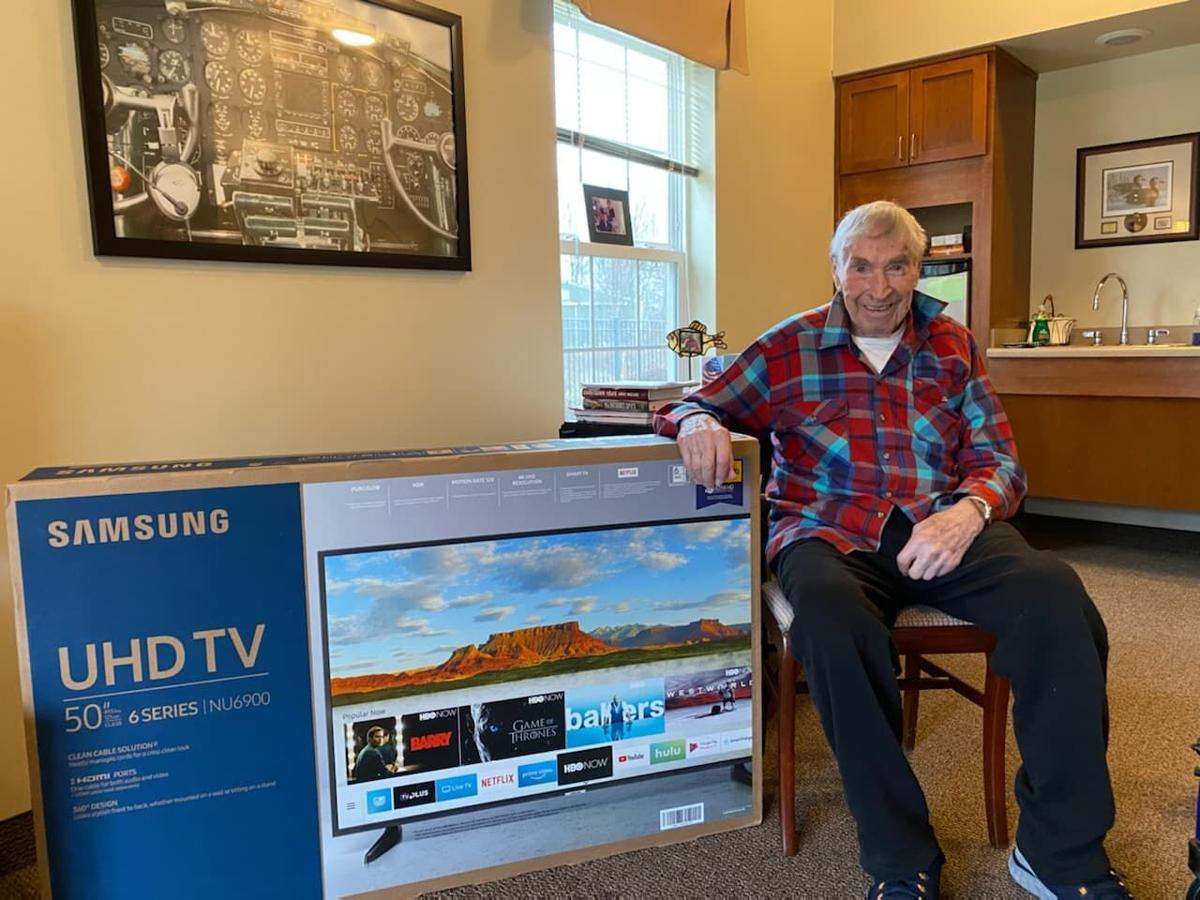 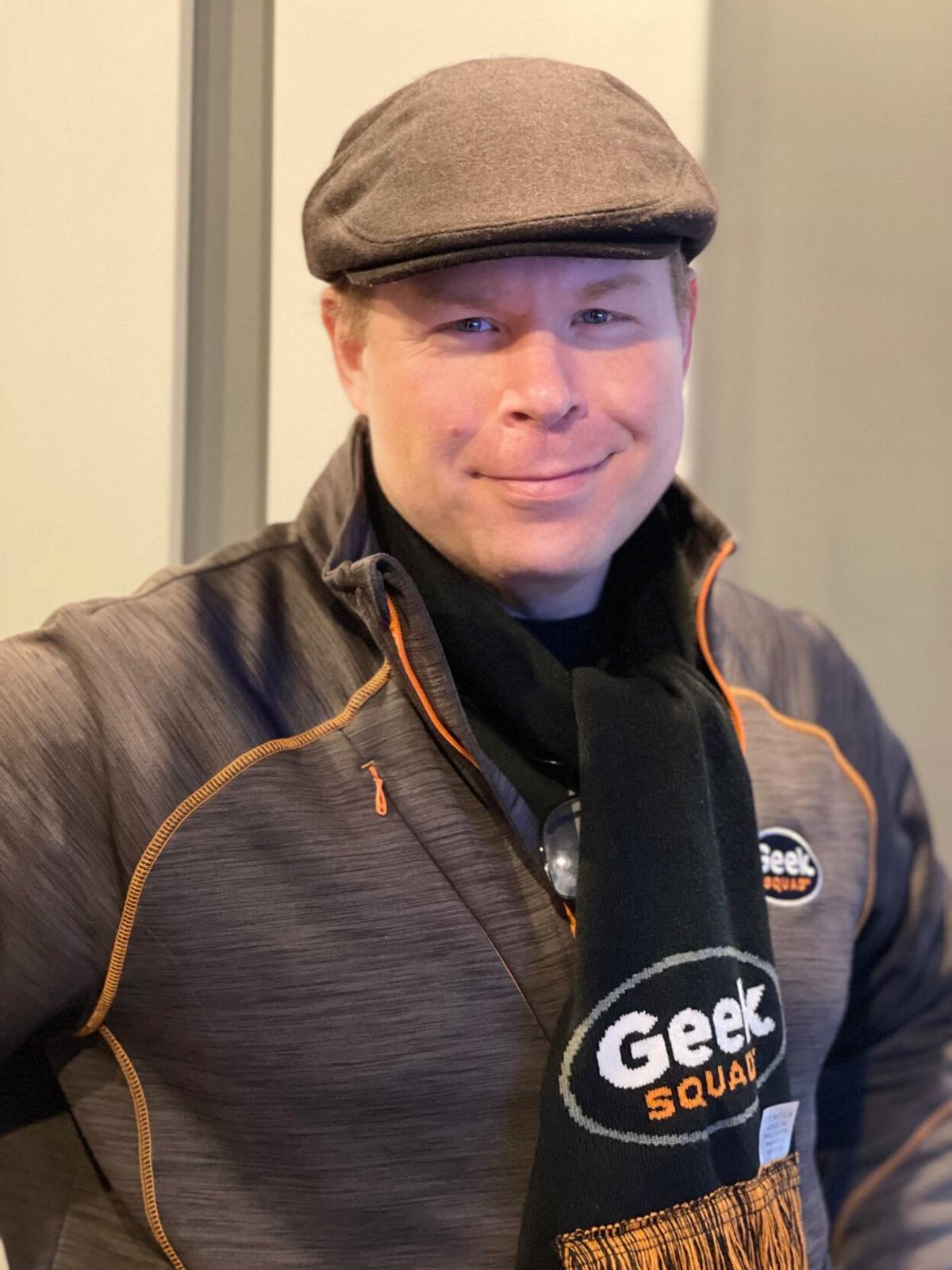 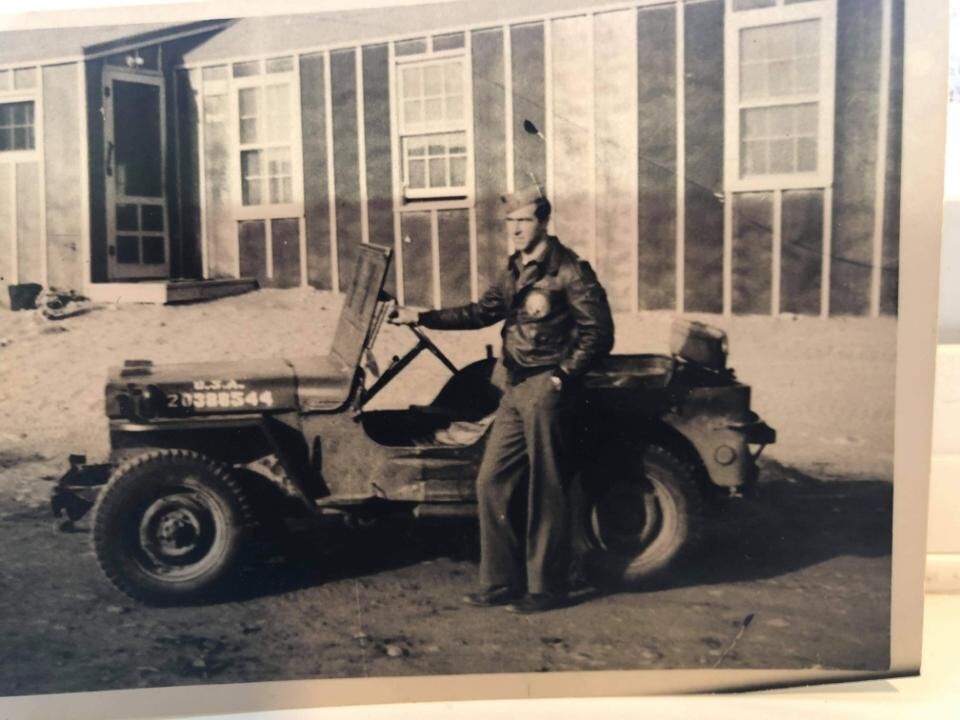 Lewis McDonald poses next to a Jeep during his service in World War II. 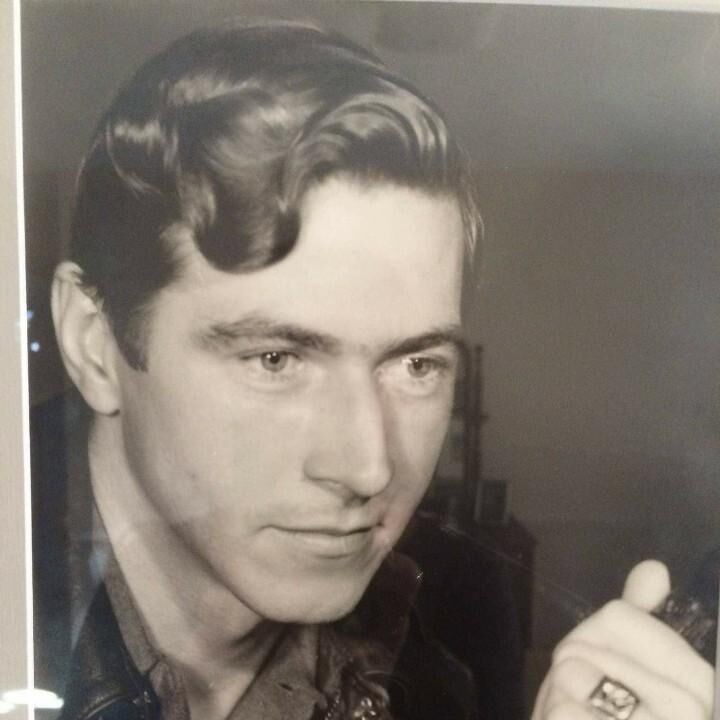 An old picture of Lewis McDonald poses next to a Jeep during his service in World War II.

Lewis McDonald poses next to a Jeep during his service in World War II.

An old picture of Lewis McDonald poses next to a Jeep during his service in World War II.

TRAVERSE CITY — Brian O’Hara was simply looking to do something special for his uncle.

Lewis McDonald, who turns 98 years old the day after Christmas, was isolated in a Rockford assisted living facility, watching TV on a tiny screen. O’Hara thought a World War II B-17 pilot deserved something a little better and a little bigger.

O’Hara walked into the Traverse City Best Buy store on Nov. 28 looking for a good deal on a new television for his uncle. By the time O’Hara walked out of the store, deal didn’t begin to describe his extraordinary shopping experience.

After asking for a discount on a 43-inch TV, the Best Buy salesperson sought out his superior to see if they could take a little off the retail price for a World War II veteran who flew 14 missions over Germany and Czechoslovakia.

“He came back with the assistant manager,” O’Hara recalled of the assistant manager he knew only by the first name of Tim. “He said, ‘We have to take care of our veterans.’ They went in the back for like five minutes and came back out and said, ‘You come to the front of the store when you’re done shopping. We have a TV picked out for you.’”

Tim turned out to be Tim Umstead, Geek Squad Manager at the Traverse City Best Buy. When O’Hara left the store, he discovered the box at the front of the store contained a 50-inch Samsung Ultra High Definition TV.

The cost of the TV didn’t come out of some kind of special contingency fund at the national retail chain, said Claire Larson, public relations specialist at Best Buy in Richfield, Minnesota.

“This was a donation provided by Tim,” Larson said.

Umstead said he was simply doing what he could for a group that means so much to him.

“I love working for Best Buy and helping people here,” Umstead said in an email. “When I heard Mr. O’Hara’s story I was so moved, and it made me think of my own dad, who is a retired Marine, and my grandpa, who was a Marine in World War II.

“And it just felt like the right thing to do, especially around Christmas time.”

Adam Ziegler, general manager of the Traverse City Best Buy, said none of the details of the shopping story were a shock.

“Tim embodies the spirit of giving back that runs deep throughout all of Best Buy,” Ziegler said in a email from corporate public relations. “This year he wanted to impact someone on a more personal level, he was moved to act in a way that was meaningful for this family. Unsurprising, as Tim is the type of person to offer you the shirt off his back, even if it’s warm out already. He’s just a genuine and great guy.”

Getting something for a great guy was what brought O’Hara into Best Buy two days after Thanksgiving.

O’Hara, 58, is a retired educator. He was a teacher and athletic director at Benzie Central and a former principal at Onekama.

And despite being separated in age by four decades, O’Hara said he has a unique bond with McDonald.

“He’s got to be a real good friend of mine these last few years,” O’Hara said. “If we were closer in age, we’d probably be best friends. We make each other laugh and we have a lot in common. He’s also my last connection to my mother’s side of the family.

“I did it because he’s my uncle and he’s a World War II vet. And I love him. If he’s going to be stuck in his room all the time in a nursing home, at least he deserves a TV he can see.”

The next day, O’Hara delivered the TV to his uncle at Boulder Creek Assisted Living in Rockford. O’Hara said McDonald is lucky to be here in more ways than one.

“One flight, after they dropped their payload (of bombs), they took flak from anti-aircraft,” O’Hara said. “They had to pull into an airport in France. It was supposed to be controlled by the Germans, but fortunately it wasn’t.

“When they got out they had over 250 bullet and flak holes in the airplane. My uncle said one (hole) was so big, you could put your head through it. It was very lucky.”

After the war, O’Hara said his uncle spent a year flying over and mapping Greenland. As with a lot of World War II veterans and The Greatest Generation, O’Hara said McDonald didn’t see his role as anything special.