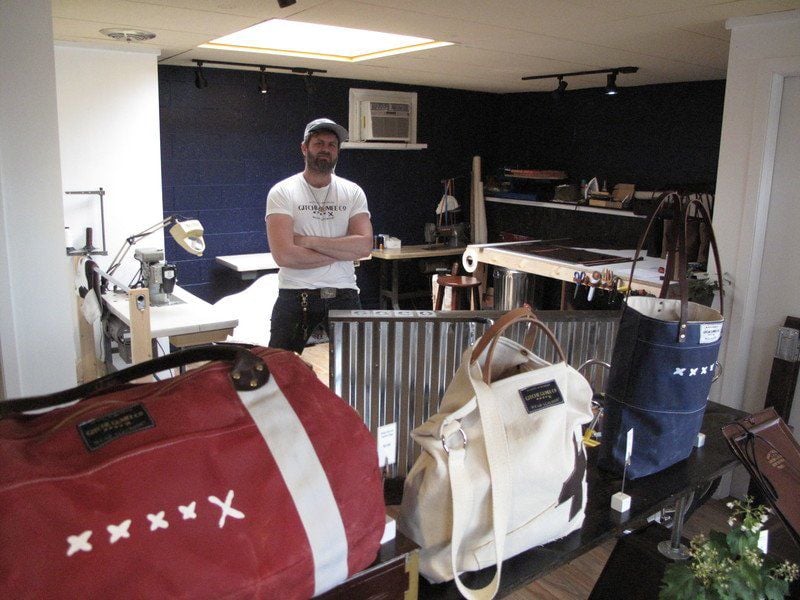 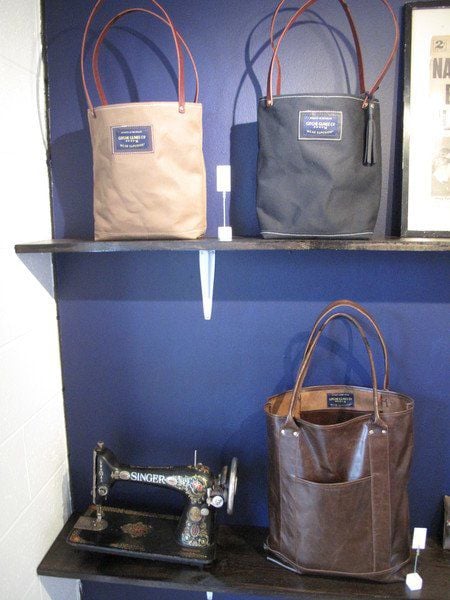 A line of handbags flank an old Singer sewing machine in the Gitche Gumee Company.

A line of handbags flank an old Singer sewing machine in the Gitche Gumee Company.

TRAVERSE CITY — Michael Wahlstrom wants to bring the hand-crafted nature of the beer industry into the realm of garments and textiles.

Locally-made goods from U.S. products are behind the newly-opened Gitche Gumee Company, in Suite 3 at 346 E. Front St. The workshop that produces the handbags, leather goods, apparel and accessories is part of the space, giving the customer a look at the production process.

"I think the market is ready for it," said Wahlstrom, the owner and "maker" behind Gitche Gumee. "People will dig kind of seeing it made and appreciate what goes into it, similar to what the craft beer scene has done. People like that it's craft, it's micro, it's hand-made."

Gitche Gumee was part of Henry Wadsworth Longfellow's The Song of Hiawatha poem in 1855, referring to the Big-Sea-Water. The Ojibway language uses a similar term to refer to Lake Superior.

Wahlstrom adapted Gitche Gumee from his Superior Michigan Natural Dyes company, but also to describe "the true soft and rough nature of Superior by combining textiles and designs that are both beautiful, cool and rugged."

"We're primarily focusing on more of a branded collection, lifestyle pieces that tell a story," he said.

Each of items for sale in the store carries a series of five X's.

"It's an attention to detail," said Wahlstrom, who plans to offer men's and women's swimsuits in late July. "I like finding Easter eggs on garments where the designer took the extra effort to make something hand-made. I hand-stitch five X's on everything, one X to represent each Great Lake and I stitch one larger X to represent Lake Superior Gitche Gumee."

The hand-crafted nature of the products that include handbags, totes, wallets, fashion knits and T-shirts mean the inventory is a bit in flux.

"We're using real premium, vintage fabrics that I find and upcycle," said the graduate of the Fashion Institute of Technology in New York City. "One day you come in here and you might see something you like and a week and a half later you come back and it's not here and something new is. That's how we do it.

"Pretty much everything I make, I make four of, and then once it's gone, if I have the textiles or if I want to make it again, I'll do it or I'll switch to something else."

Most of the raw materials are sourced regionally or from other parts of the United States. Leather goods come from Horween in Chicago, duck twill canvas is from a textile mill in New Jersey. Even the brass zippers are custom made in Los Angeles.

Gitche Gumee products launched online on Nov. 10, the anniversary of the sinking of the Edmund Fitzgerald in Lake Superior. The Traverse City store opened on June 9. More information is available at www.gitchegumee.co (no "m").