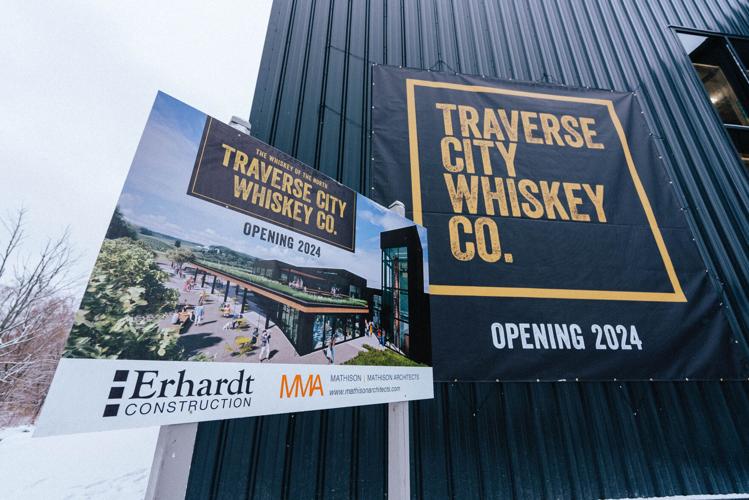 A sign of the finished Traverse City Whiskey Co. facility next to the nearly 70,000-square-foot distillery at Friday afternoon’s groundbreaking. 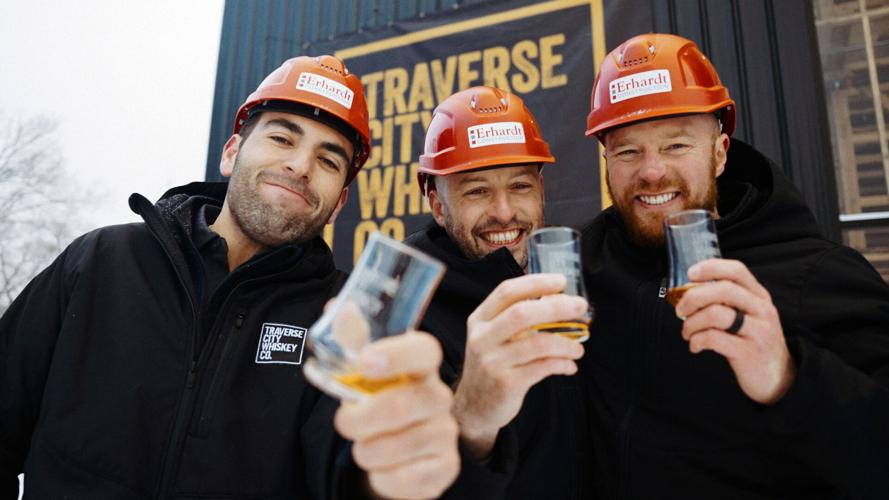 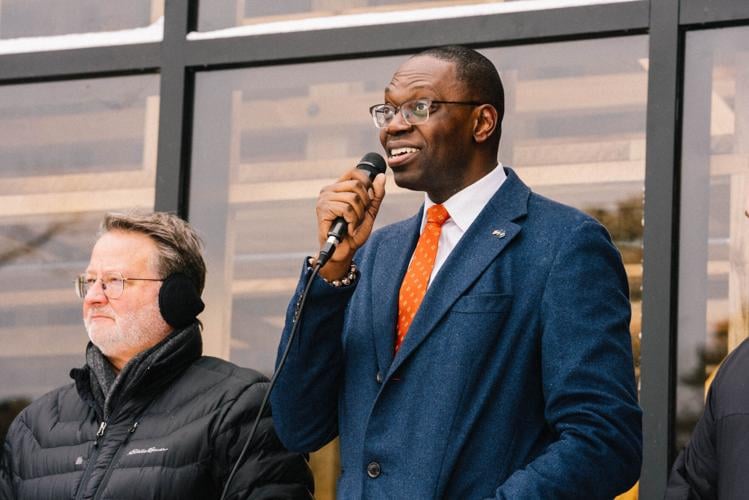 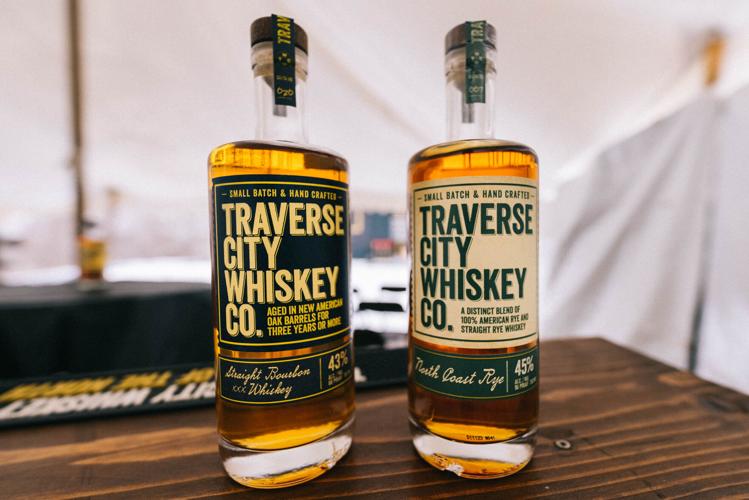 Traverse City Whiskey Co. bottles sit inside a tent at the groundbreaking ceremony on Friday. 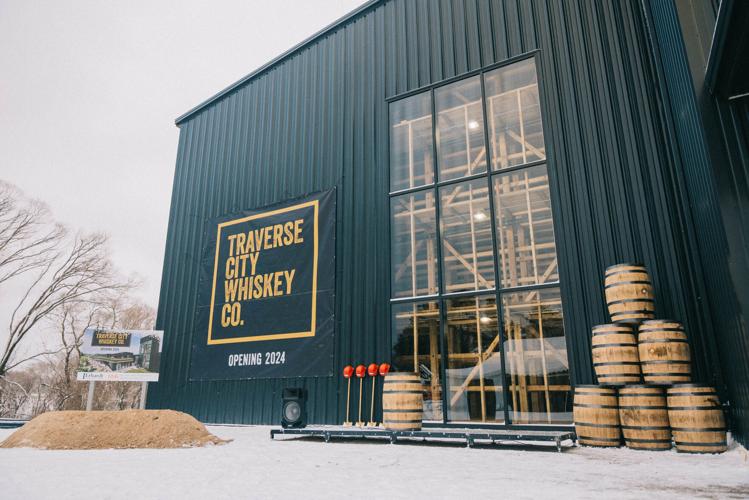 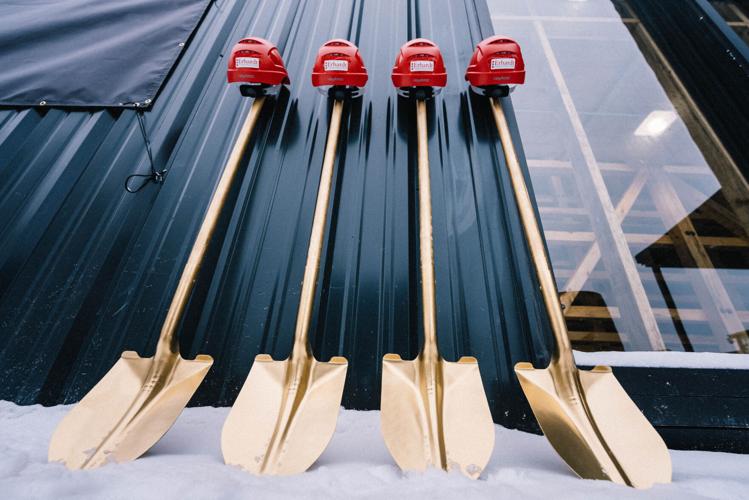 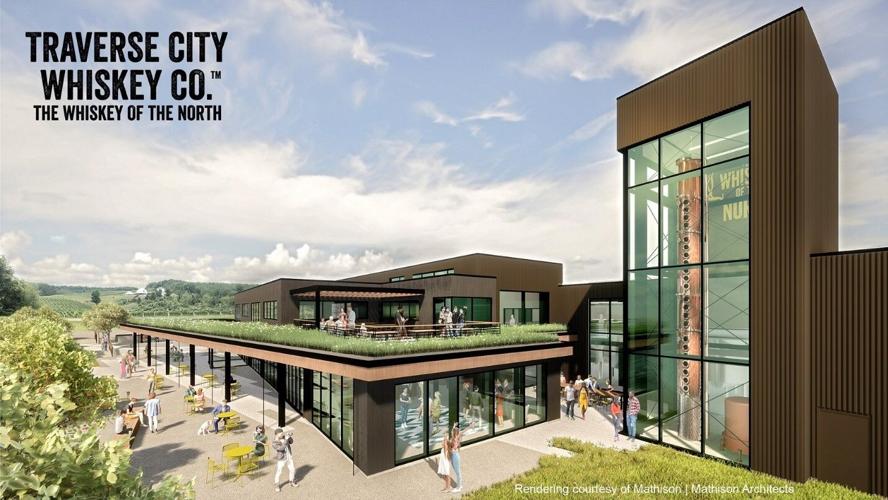 A sign of the finished Traverse City Whiskey Co. facility next to the nearly 70,000-square-foot distillery at Friday afternoon’s groundbreaking.

Traverse City Whiskey Co. bottles sit inside a tent at the groundbreaking ceremony on Friday.

TRAVERSE CITY — An industry heavily reliant on aging wasn’t about to delay things any further.

TCWC is turning the former Cherry Growers Inc. fruit processing facility into “an all-encompassing campus that will provide a unique immersion in whiskey culture and industry and will add a new experience to the thriving northern Michigan agritourism industry” on 35 acres in Leelanau County, President and co-founder Chris Fredrickson said in a release.

Designed by Mathison Architects in Grand Rapids, the “first-of-its-kind facility will be Michigan’s largest distillery,” according to a release announcing plans expected to generate a capital investment of approximately $20 million and create nearly 100 jobs for Traverse City Whiskey Company, which launched in the summer of 2012.

“We’re absolutely thrilled,” Frerdrickson said on Thursday morning. “We’ve been preparing for this for 3½ years. There has been a lot of updates, a lot of changes, a lot of evolution to allow us to realize a grain to glass distillery.”

Fredrickson was joined at Friday’s groundbreaking by U.S. Sen. Gary Peters (D-Michigan) and Michigan Lt. Gov. Garlin Gilchrist II. The duo were in town to speak at the Northern Michigan Policy Conference earlier in the day at Grand Traverse Resort and Spa.

“Governor (Gretchen) Whitmer and I are grateful for Traverse City Whiskey’s commitment to the Traverse City region and Michigan,” Gilchrist said in an email statement on Tuesday. “Their announcement of a new 70,000 square foot facility is proof that thanks to our tenacious and hardworking entrepreneurs, Michigan’s economy is on a roll. I am sure that Traverse City Whiskey Company will lead the industry for years to come, and I’m excited to see where they’ll go next.”

“Our goal is to have this nearly completed by the end of the year,” Fredrickson said. “With a project of this size, there is always going to be some pretty big unknowns.”

The project, bolstered by a $750,000 Michigan Business Development Program performance-based grant announced in late October 2022, is designed to be a leader for the entire industry.

“Our point here is to one, build a distillery for bringing the company up to scale,” Fredrickson said. “But two, it will also be home to other distillers.

“We purposely built the infrastructure to allow us to have the bandwidth to help other distillers produce spirits.”

Fredrickson said the Traverse City Whiskey Co. is capable of producing three barrels of spirits a day at its stillhouse located at 201 E. 14th St. When the new facility is up and running, it will produce nearly 70 barrels a day.

“Within a few years we expect that production to double that operation.” Fredrickson said. “We designed and engineered the building to double our operation as needed.”

Fredrickson said there has already been “a lot of interest in the extra capacity.”

That’s fitting for what the facility will become thanks to a $750,000 state grant though a partnership with the Michigan Economic Development Corporation.

Helping to welcome a crowd of more than 80 people on a chilly day in January were the other two TCWC founders, Moti Goldring amd Jared Rapp. Even though Fredrickson is the face of Traverse City Whiskey Co. as president, he said the company’s other two founders are just as critical.

“We all play an equal role with Traverse City Whiskey Company,” Fredrickson said. “We all wear different hats at different times. It’s our ongoing collaboration that has made this successful over the last decade.

“We just celebrated our 10-year anniversary (last summer) and so many start-ups don’t make it that long in business. We’re fortunate to have a great team. It’s not just leadership. It’s the production team, the sales team and the bar team that has made this such a success.”

TCWC currently employs a staff of 40 in Michigan. About 35 of those work in northern Michigan.

The Traverse City Whiskey Co. expanded into premium cocktail cherries in 2018, which is now sold in every U.S. state. The company acquired Cocktail Crate premium craft mixers and opened a tasting room in Ferndale — The Outpost — in 2019.

TCWC products are available via www.tcwhiskey.com and at establishments in more than 30 states.

Now the company is poised to grow into nearly 100 jobs over the next three years, Fredrickson said. The state grant and the company’s partnership with the MEDC made the entire expansion a reality.

“The $750,000 made the entire $20 million investment possible,” Fredrickson said in October when announcing the grant. “Without that we would have been challenged to make this project work in northern Michigan.”

The Traverse City Whiskey Company was granted a special use permit by the Elmwood Township Planning Commission on Sept. 20 “for an expansion of previously permitted distillery tasting room, offices and visitor center” on parcels at 9440 and 9432 S. Center Highway, according to meeting minutes and Zoning Administrator Sarah Classen.

“Elmwood Township is excited that TC Whiskey is revitalizing the former Cherry Growers operations,” Elmwood Township Supervisor Jeffrey K. Shaw said in the release announcing the grant. “The property has been vacant and decaying, and the TC Whiskey project will provide economic opportunity for workers in our area.”

Whitmer and MEDC CEO Quentin L. Messer Jr. hailed the investment TCWC is making with the new facility. Messer was initially scheduled to attend the Jan. 20 groundbreaking, but did not make the trip.

“We’re pleased to support your expansion in Michigan, and appreciate this vote of confidence in the strength of our talented workforce and attractive business climate,” said Messer, who is also president and chair of the Michigan Strategic Fund board. “This project further demonstrates Team Michigan’s commitment to supporting economic opportunities throughout all regions of the state.

“We’re proud to join our local partners as we celebrate TCWC’s expansion and look forward to working together to grow, add jobs, and provide greater opportunity for our friends and neighbors in northern Michigan.”

According to September 2021 data from Statista, Michigan ranks sixth in the United States in the number of operating craft distilleries.