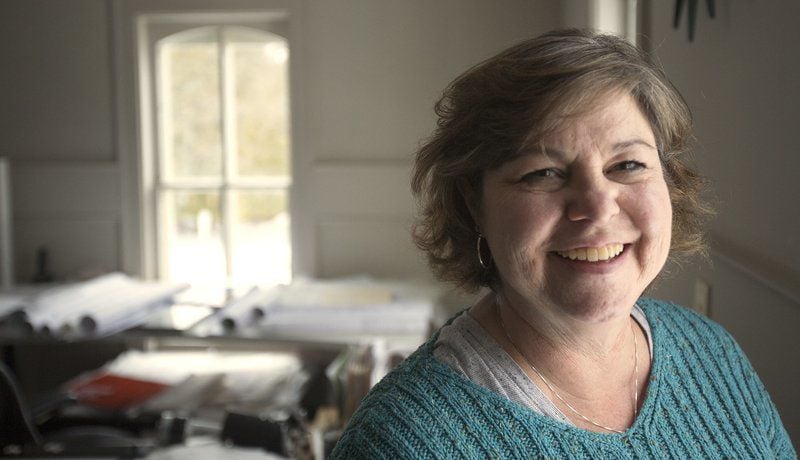 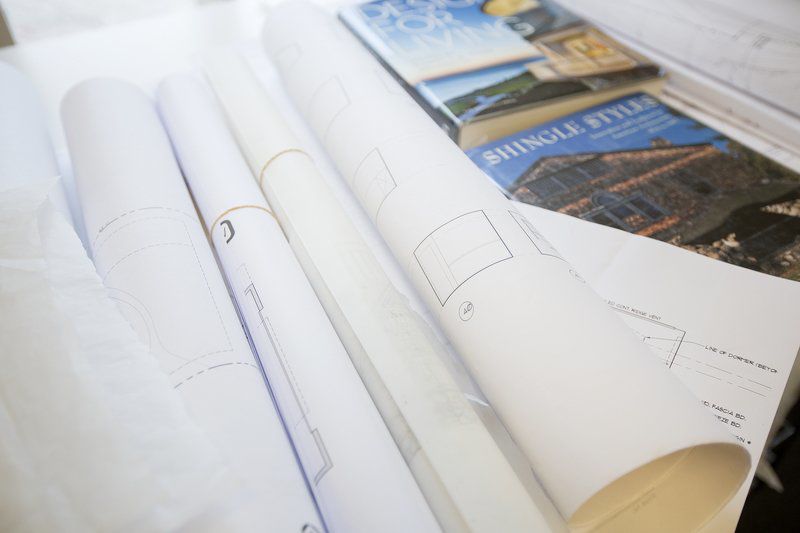 Plans for designs are everywhere in the Sarah Bourgeois Architects office. 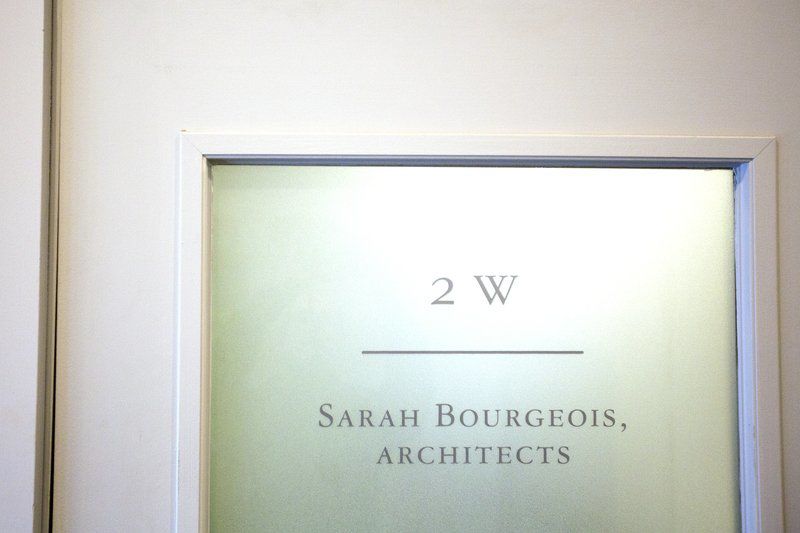 Sarah Bourgeois Architects is located at Old Munson Hall at 921 W. 11th St. in Traverse City and has three architects, each one as busy as the next. 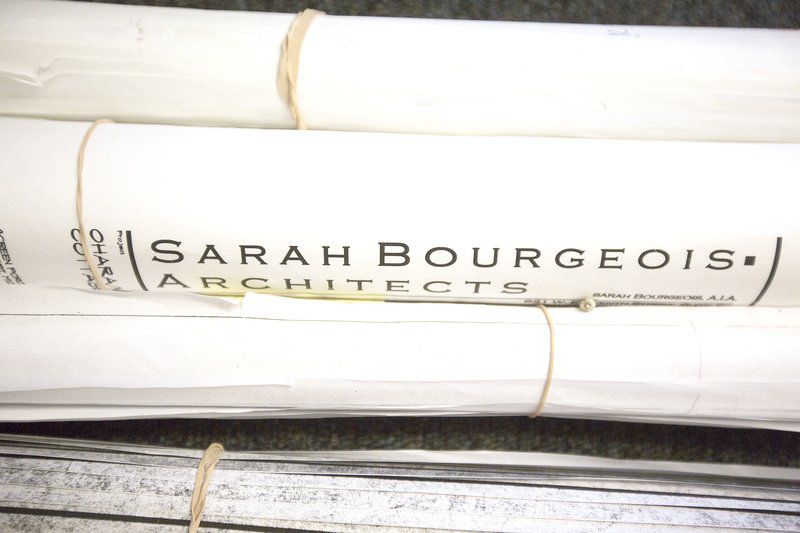 Plans for designs are everywhere in the Sarah Bourgeois Architects office, showing the many projects her firm takes on.

Plans for designs are everywhere in the Sarah Bourgeois Architects office.

Sarah Bourgeois Architects is located at Old Munson Hall at 921 W. 11th St. in Traverse City and has three architects, each one as busy as the next.

Plans for designs are everywhere in the Sarah Bourgeois Architects office, showing the many projects her firm takes on.

Editor's note: This story was published in Grand Traverse Business magazine's Winter 2018 issue. For more stories from the magazine, click here to read GT Business in its entirety online.

TRAVERSE CITY — Sarah Bourgeois loves to work with people, and she has mastered the art of listening to her clients.

“She’s open-minded, she’s kind and considerate, and she’s willing to listen,” said Gary Coyle, who has built 50 homes in the last few decades. “My experience with previous architects is they were very expensive, very hard to deal with personality wise. They were thick-headed and stubborn. They won’t listen to you for nothing. Her real strength is her ability to listen to what you say.”

The key to Bourgeois’s success is her personality, Coyle said. He’s currently working with her on a home in Leelanau County, which is the third house they’ve designed together.

“I get compliments that I’m easy to work with. It’s my job to give people what they want and to have it make sense,” Bourgeois said. “This is what I do, and I do it well, and I love doing it.”

Her architecture firm, Sarah Bourgeois Architects, is located in Old Munson Hall at 921 W. 11th St. in Traverse City. The firm has three architects, including Bourgeois, and their schedules are busting at the seams.

“It’s busy and it’s sometimes crazy, but Bourgeois always takes it in stride,” said Christie Halverson, an architect who works with Bourgeois. “The real estate market has obviously been booming.”

Business wasn’t always great, and both Bourgeois and Halverson remember that not too long ago — after the housing market crashed in 2008 — they had barely any work.

If they’ve learned one thing from the recession, it’s how to prepare for the next one.

“Times are good, but I certainly am very cautious, because I know that crash is coming again,” Bourgeois said.

Bourgeois’ portfolio is filled with commercial design, new residential homes and major remodeling projects. She started her career remodeling homes, and that’s something she loves doing.

Prior to opening her own architect firm, Bourgeois — who has a master’s degree in architecture from the University of Michigan — worked for big architecture firms in Detroit, including Lubin Associates, Inc.

She and her husband moved to Traverse City because he was tired of “getting caught in Metro Detroit traffic,” she said with a chuckle.

At first, she worked exclusively on remodels, from an office in their home as they raised two children. Bourgeois later started working part-time at a local architecture firm, where she worked on designing residential homes for lakefront properties.

She went on to work with with Ken Richmond and Fred Bartlett.

“And everything was great. We worked together for about 10 years and then the recession came … and jobs were stopping,” Bourgeois said.

They divided up the partnership, and Bourgeois set out on her own. It wasn’t until the recession cooled down that she was able to move into an office space and eventually hired more architects.

The first thing Bourgeois does is go on a site visit with clients, whether it be a new home or a remodel. Next, they begin talking about concepts and the look and feel that clients want.

“How do you move about your house? I’m not here to change the way you live. If you have certain habits in the morning, those habits should be included in the design,” she said.

Often times, clients will show her hundreds of photos from social media or websites that they want to incorporate into their project, and Bourgeois has the tough task of sorting out what they do and don’t want.

“It’s hard for owner to decide, especially when they’re getting bombarded on the internet,” she said. “I try to sort out what they’re saying or seeing. Even though there’s a hundred pictures, there’s probably only two or three ideas.”

She’s skilled at pinpointing exactly what her client’s are trying to say.

“Sometimes we’re forcing ideas on a house but it’s not right. It just doesn't flow. That’s my job… to sort out all these wishes and sort out what makes sense,” she said.

Bourgeois also works hard to find reliable, trust worthy and talented builders and sub contractors that will deliver the exceptional customer service that her client’s brag about.

On the commercial side, Bourgeois is really proud of the work she’s done at the Maple Bay Farm in Williamsburg. She’s been working with the Grand Traverse Regional Land Conservancy on the project, remodeling the bathrooms and creating better access to the building.

Residentially, she’s super proud of a recent home remodel where she designed a 12-foot wide addition to a home near Fishtown in Leland, that included a new kitchen, living and dining room.

What’s next for Bourgeois? She wants to continue building strong relationships and making a difference in people’s lives through her work.

“She’s really a great person, and she’s got a lot of talent,” Coyle said.