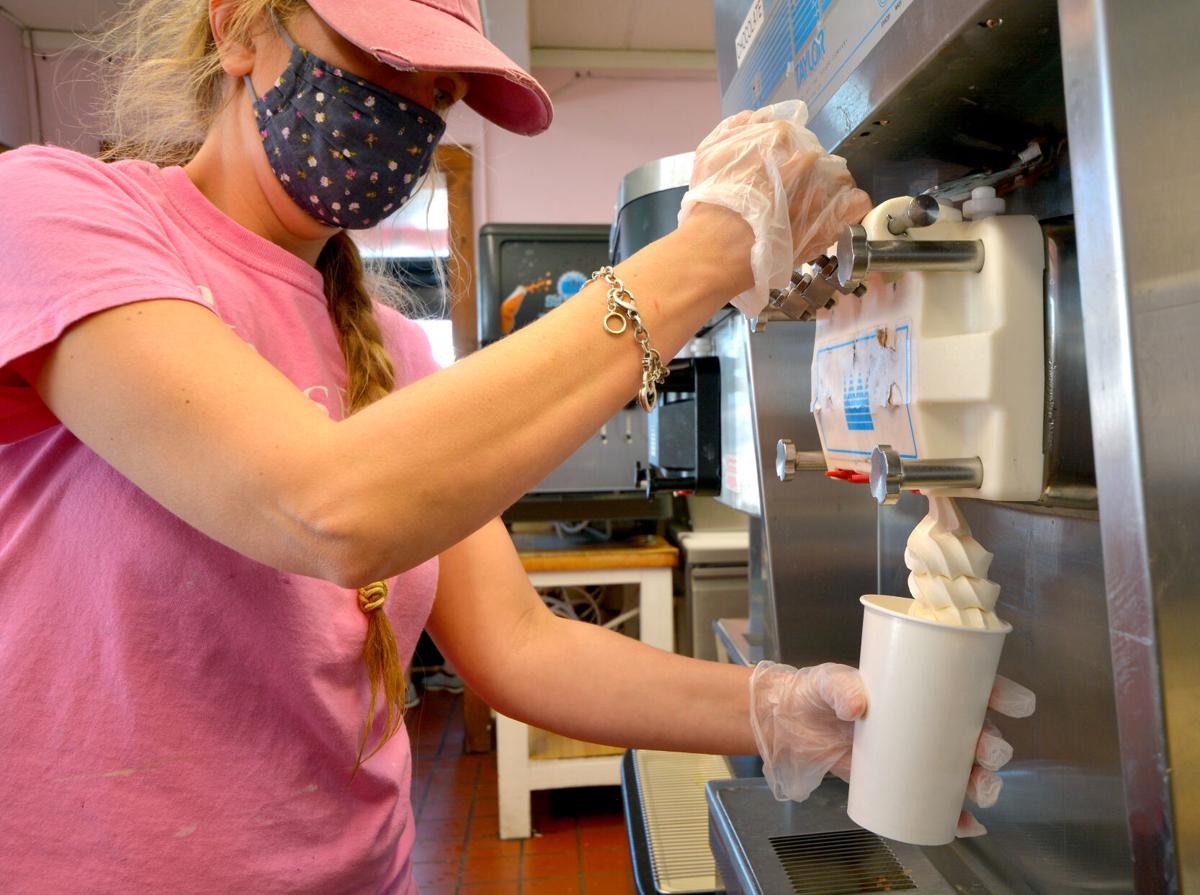 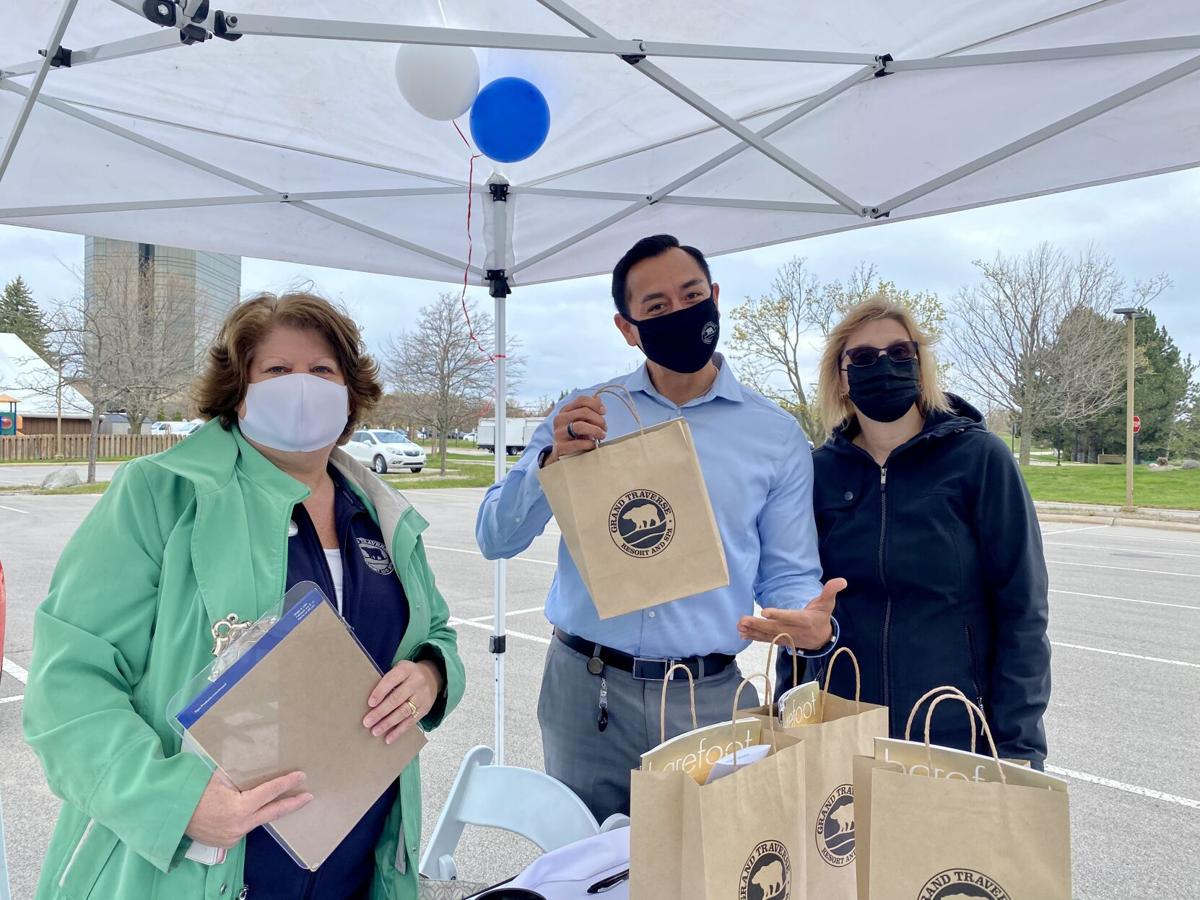 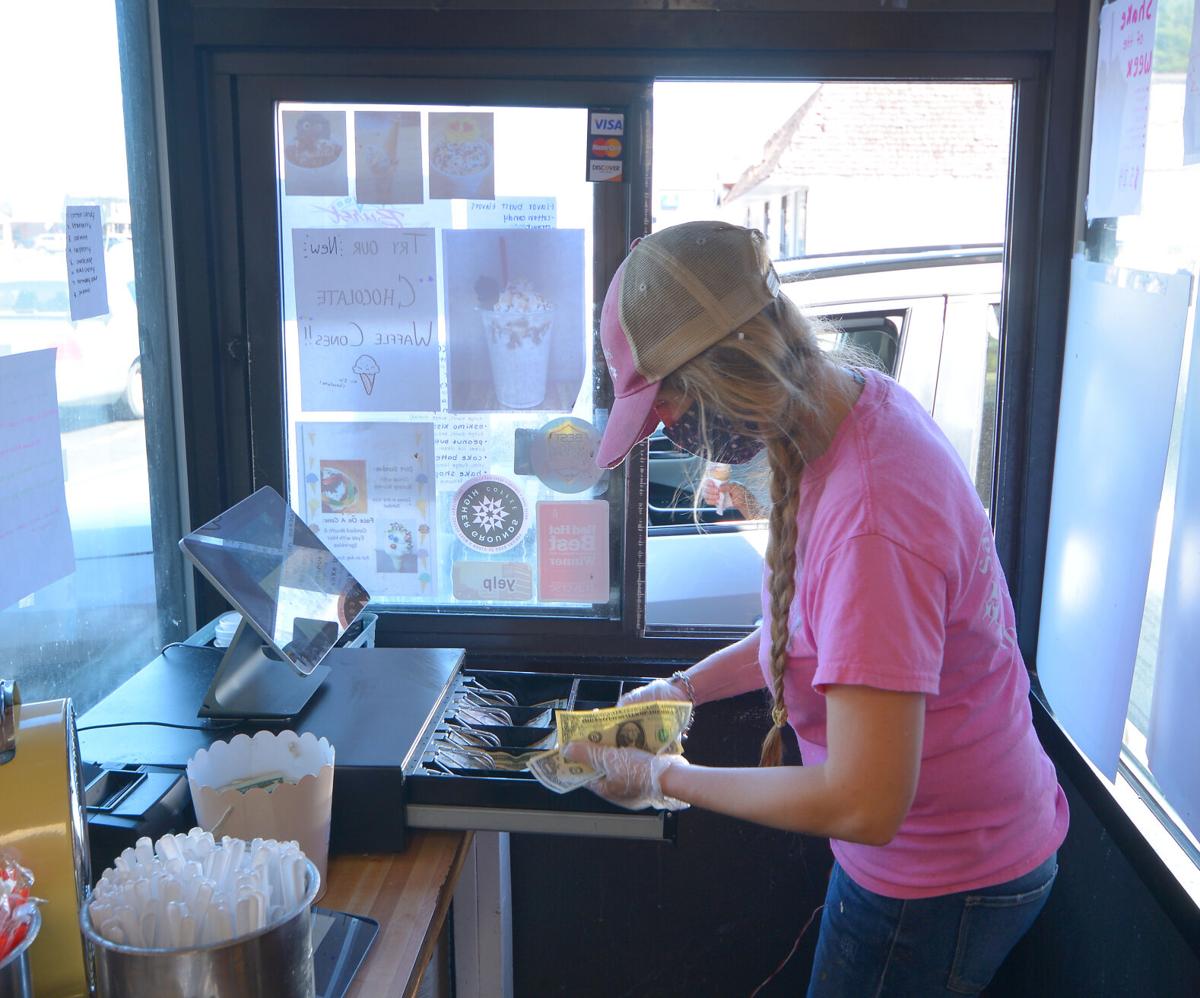 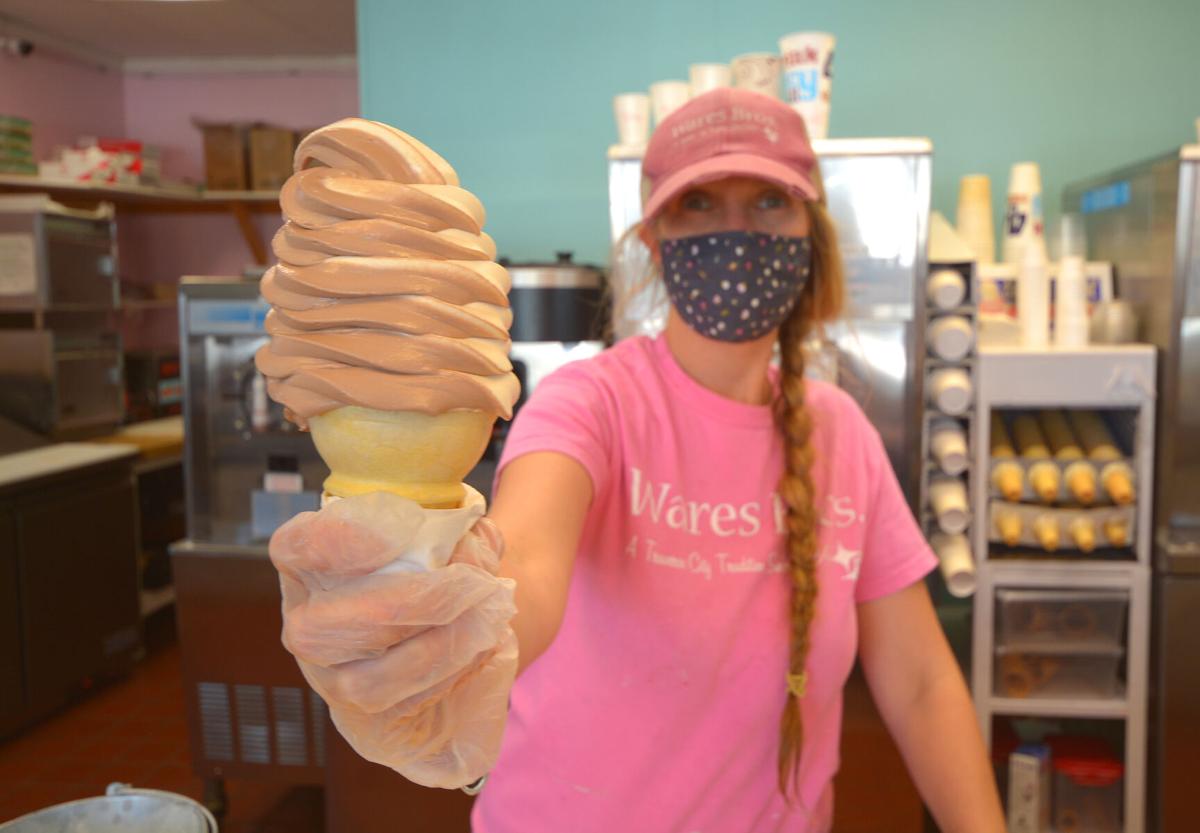 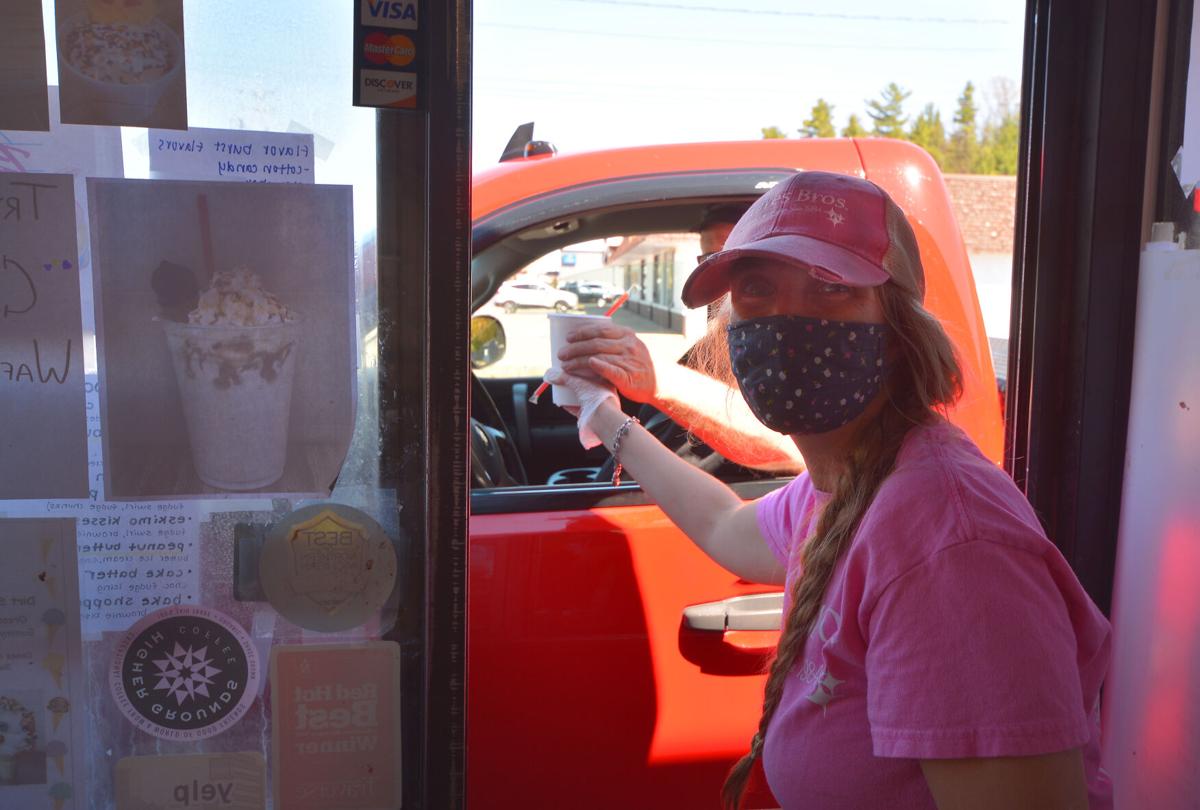 Melanie Porter hands an order to a customer at Ware's Bro's Frosty Treat. 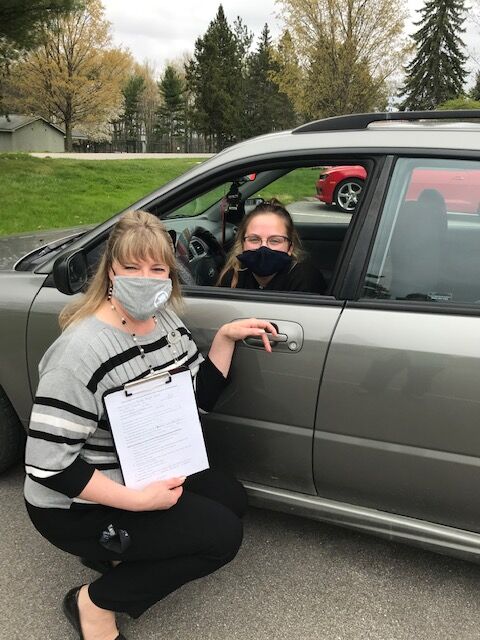 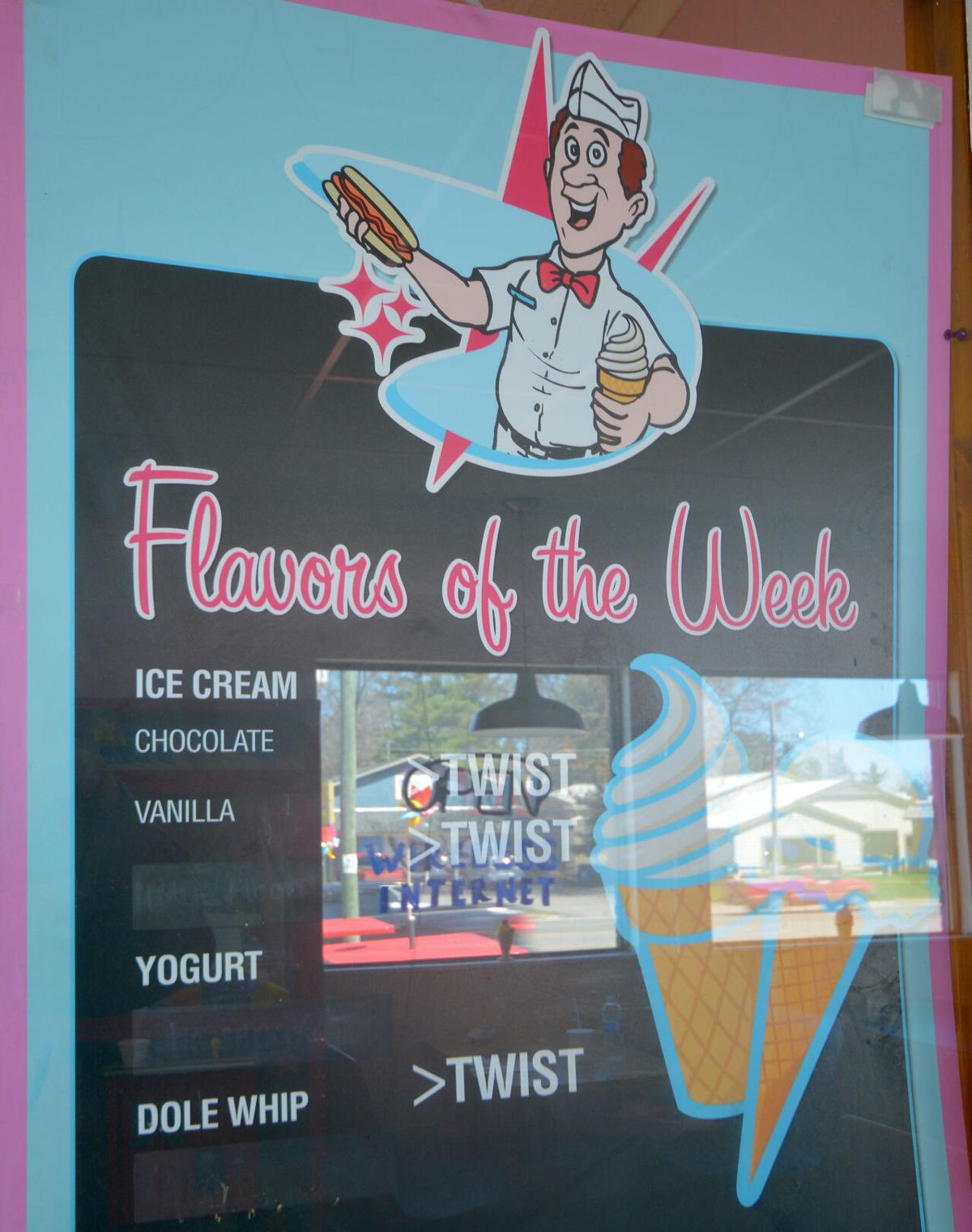 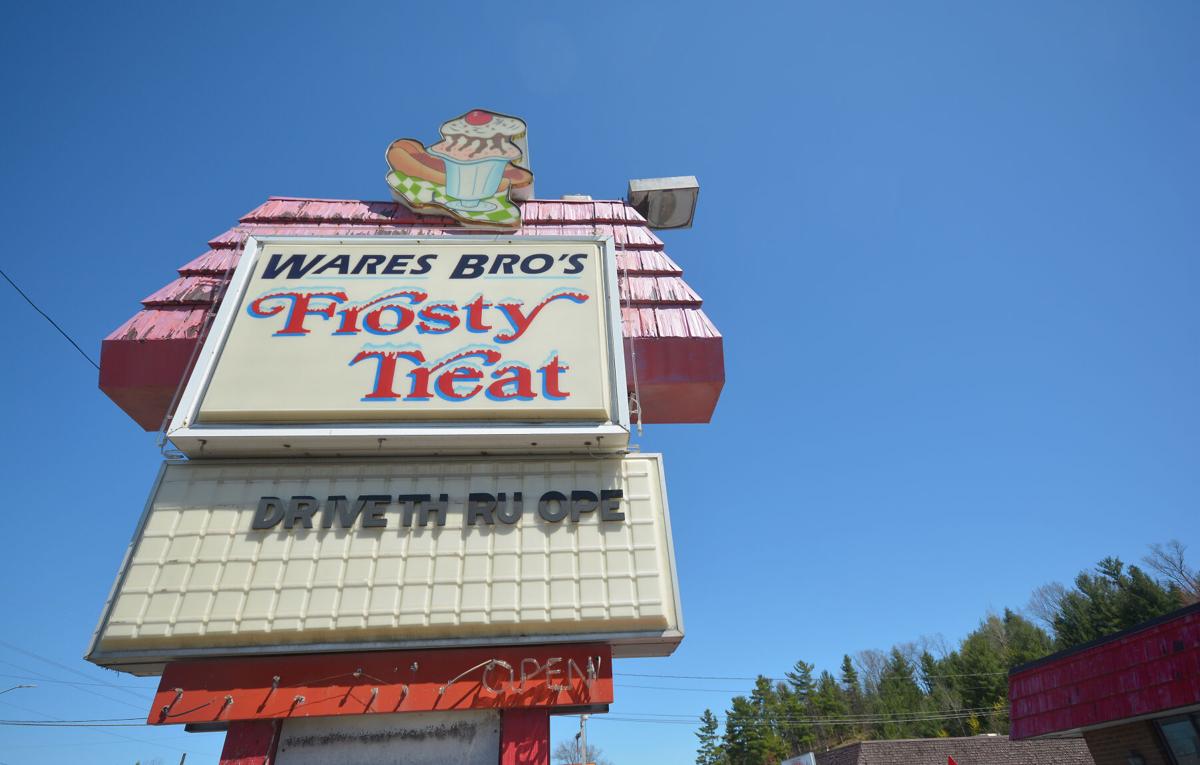 Melanie Porter hands an order to a customer at Ware's Bro's Frosty Treat.

TRAVERSE CITY — Ready or not, here they come.

The unofficial start of the tourist season is less than two weeks away and the influx of more people eating, staying and shopping in the area requires more employees to serve, clean and wait on those additional customers.

While hospitality ‘Help Wanted’ signs dominate marquees throughout the region and companies big and small are still seeking seasonal and year-round help, the industry is prepped to embrace what 2021 brings — especially on the heels of the abbreviated and interrupted tourist season of 2020.

“We’ll be ready,” Grand Traverse Resort and Spa Director of Human Resources Matthew McClellan said. “It’s been characteristic in northern Michigan for everybody, whether it’s the small mom and pop store or (bigger employers like) us.”

“Employers are as ready as they can be,” said Northwest Michigan Works! Regional Director Lisa Schut, whose organization represents 10 northern Michigan counties.

“Certainly they are clamoring for workers. Last year was kind of a gimme; many employers laid off employees. This year it’s the opposite. They can’t get enough workers. When you drive down the street you’re seeing ‘Help Wanted’ signs about anywhere.”

More than 37 million people nationally are expected to travel 50 miles or more between May 27 and May 31, according to a release from AAA — The Auto Club Group. More than 1 million of those traveling over the five days ending wit Memorial Day are Michiganders, the release said.

The 1.09 million Michigan travelers marks a big jump from the not quite 700,000 who traveled during the Memorial Day weekend in 2020. The 2021 forecast is down from the 1.2 million state residents who hit the road over the 2019 holiday weekend.

“A year’s worth of pent-up demand is being unleashed this summer, as Americans anticipate the kickoff to the season,” Debbie Haas, AAA’s Vice President of Travel said in a release. “Travel bookings with AAA – The Auto Club Group have surged recently, setting the stage for what should be a busy holiday weekend and an exciting summer.”

And what would a summer be without ice cream.

Melanie Porter said she’s thankful for the 25-30 employees she has at two Wares Bros. Frosty Treat locations in Traverse City. While Porter said she “could use another five to 10 employees.” But despite rising food costs and rent, the business still will deliver smiles one cone or one cup at a time.

“When life gives you lemons, make lemonade,” Porter said. “Or a chocolate milkshake.”

Before the pandemic, Grand Traverse Resort and Spa in Acme employed about 540 year-round employees, McClellan said. That number swells to 750-800 during a typical summer.

GT Resort and Spa had a peak of about 620 employees in 2020. The Acme Township resort hit its high-number mark at the end of the summer and the early fall as people felt more comfortable returning after a spring and summer of limits, McClellan said.

McClellan said the resort heads “into the heat of the summer employment season” with an employee count of about 560. He characterized employment levels as not too far behind pre-COVID levels.

“We’ve steadily been building this entire time,” McClellan said. “We’ve had a slow uptick ever since the summer in terms of year-round employees.”

“We’re in a good position. We saw a lot more people willing to come back to the work environment. With the upcoming season we’re going to do very well in terms of staffing.”

GT Resort will also get a boost from having increased access to J-1 Visa workers. McClellan said the resort uses the program to supplement its workforce in the front-line positions of housekeeping, cooks, stewards, laundry and banquet. Because of lockdowns in countries like Jamaica, the program cut the staff by between a third and a half in 2020. It is restored in 2021 to 95 percent of pre-pandemic levels.

But that doesn’t mean Grand Traverse Resort and Spa isn’t looking for more staff this year — or any year, for that matter.

“We’re short 50-100 people any given year, but from the guest experience you’re never going to see that,” he said.

TC Food employs between 120-130 people to work in administration as well as Bubba’s, Firefly, The Kitchen and Grandview Catering. TC Food president and co-owner Trish Wiltse said the company is at about 130 heading into the season and could hire more if more events were allowed.

“We’ve stayed pretty close to that,” she said. “Catering is the big variable right now. We could hire another 10 to 15 to 20 people on catering staff depending on weddings.

“We have filled quite a few positions the last two weeks. We’re still looking for a few and we have several people coming back from college.”

McClellan said hospitality businesses throughout the region is looking for more help and will continue to do so.

“The market isn’t there,” he said. “There aren’t enough people to fill that need. It’s been that way for years now.”

“I’m going to be ready for the summer,” said Porter, who opened the Wares Bros. location at 1409 W. South Airport Road and worked solo for the first part of the day on Tuesday.

Advertising on the Northwest Michigan Works! Dashboard saw 4,294 total ads in April, a 15.9 percent increase from the previous month.

Of the list of top employers who posted openings last month with Northwest Michigan Works, Munson Healthcare led the way with 504.

The next two most listings were two resort properties owned by Boyne Resorts — Big Sky Resort in Montana (204) and Loon Mountain Resort in New Hampshire (180). Boyne Resort itself was fourth with 139 listings followed by McLaren Healthcare with 108, followed closely by grocery chain SpartanNash (99).

Prestige Healthcare was also among the top dozen employers, but the rest of the list included a variety of retail and resort locations.

The list of the top occupations tells an even stronger story of the need to find employees in hospitality.

Retail sales was the most advertised occupation on the Northwest Michigan Works! Dashboard in April, edging out Registered Nurses by a 183-181 margin.

A more detailed look at the April Job Demand Dashboard is available at https://tinyurl.com/AprilJobDemand.

The hospitality industry has responded to a need for workers in a lot of different ways.

Grand Traverse Resort and Spa held a drive-thru job fair for four hours over two different sessions April 29. McClellan said 10 people participated in the event, which he deemed a success. An on-site job fair before the pandemic typically would attract 25 or 30, but the April drive-thru hiring event attracted more motivated candidates actively interested in a position.

Schut said a lot of businesses have and continue to offer sign-on and retention bonuses. Schut said some companies have relaxed experience and education requirements to attract workers, putting the emphasis on “reliability and dependability.”

Wiltse said TC Food continues to offer sign-on and retention bonuses. The company also offers a shift meal as well as a retirement plan and paying a portion of monthly medical benefits for its full-time employees, necessary to keep its restaurants open year-round.

“We try to pay it forward all the time,” Wiltse said.

Of course the best way to keep hospitality staff is an easy one: Pay them more.

Wiltse said back-of-the-house employees at TC Food are making about $3-4 more an hour than they were two to three years ago.

“Most employers are going for the wages,” she said. “That’s constant for workers. It’s a way to be competitive.”

Wiltse said she’s talked to other restaurant owners who report that some employees are hired and don’t show up for the first day of training, or who will skip scheduled interviews.

A variety of reasons are offered for the unwillingness to work, including a lack of workforce housing. Others are reluctant because of COVID-19 health concerns or complaints from customers about safety protocols.

Then there’s some who simply can make more money from unemployment than being employed.

“The elephant in the room is unemployment insurance,” Schut said. “People can do the math; people are smart.”

Places like Wares Bros. run into another situation with the age of its work force. Those age 15 and under have legal work limits in place, which adds another wrinkle.

“This year has been trying with hiring,” Porter said. “We’ve got a lot of young applicants, which is awesome because they can grow with you. But they can only work until 7 during the school year and 9 in the summer and we’re open until 9 right now and 10 in the summer.”

But even with those issues, the hospitality industry is more than ready to embrace the 2021 summer season.

Porter has the advantage of providing ice cream, something we all scream for during warmer weather.

“I’m going to be ready for the summer,” Porter said. “We’re here to make everyone happy. We’re going to make it happen.”