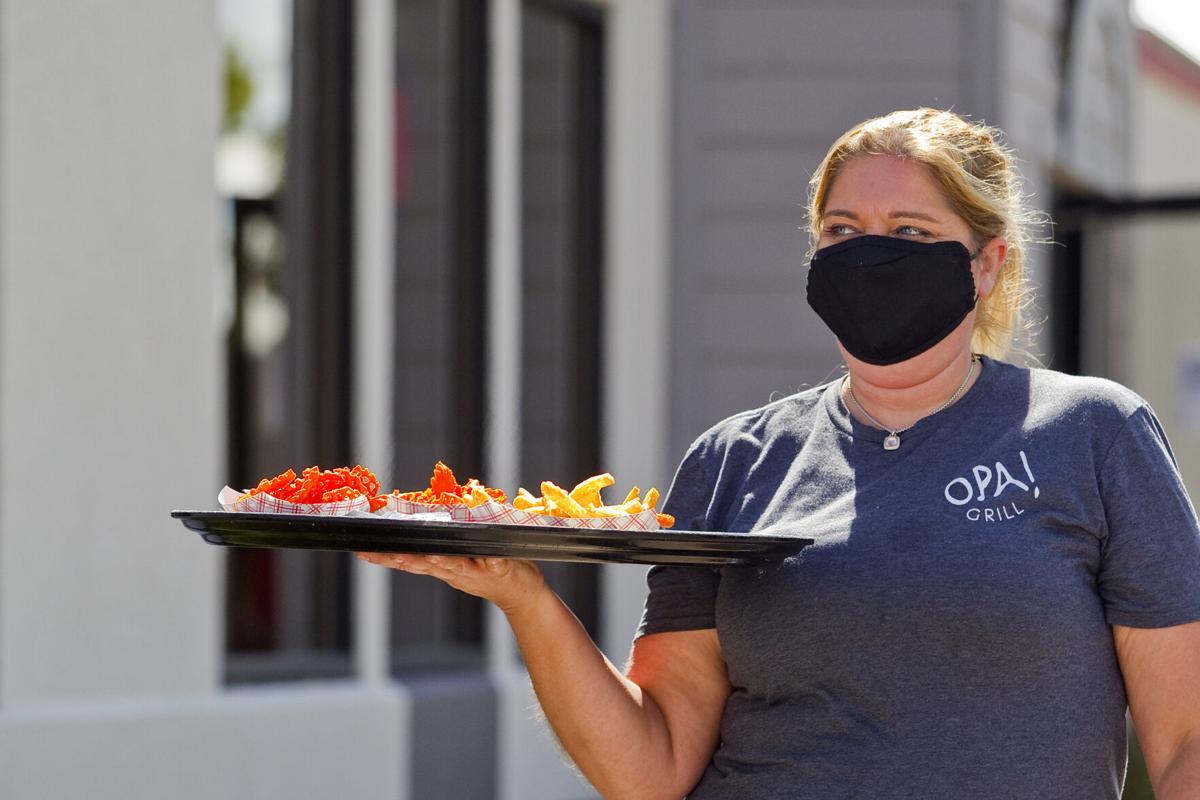 Katie Albert brings an order to customers seated in a large tent set up in the parking lot outside Opa! Grill and Taproom in Traverse City in September. 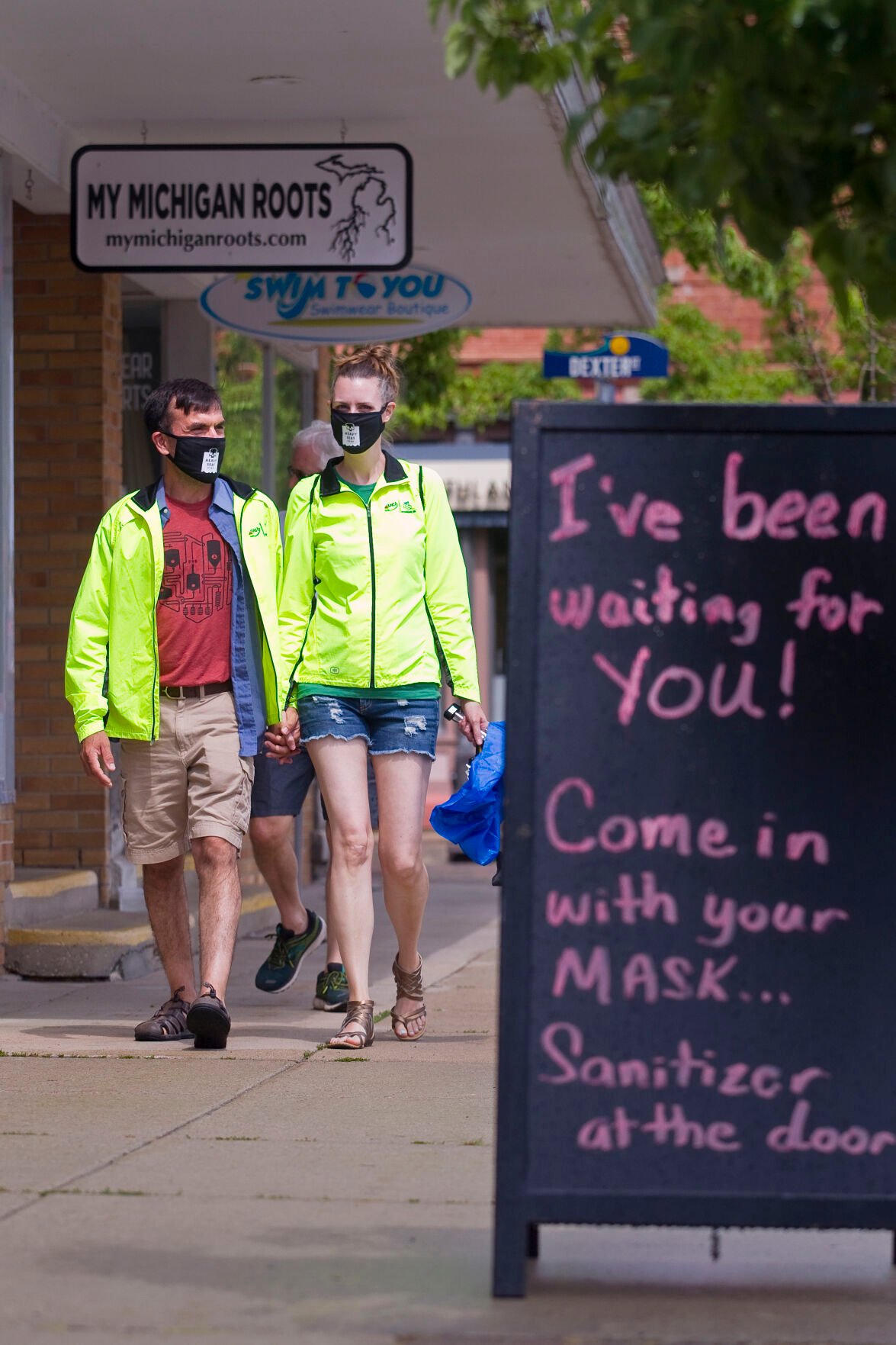 Ken Biles and Jennifer Thompson, of Baltimore, wear masks while walking along River Street in downtown Elk Rapids in July. 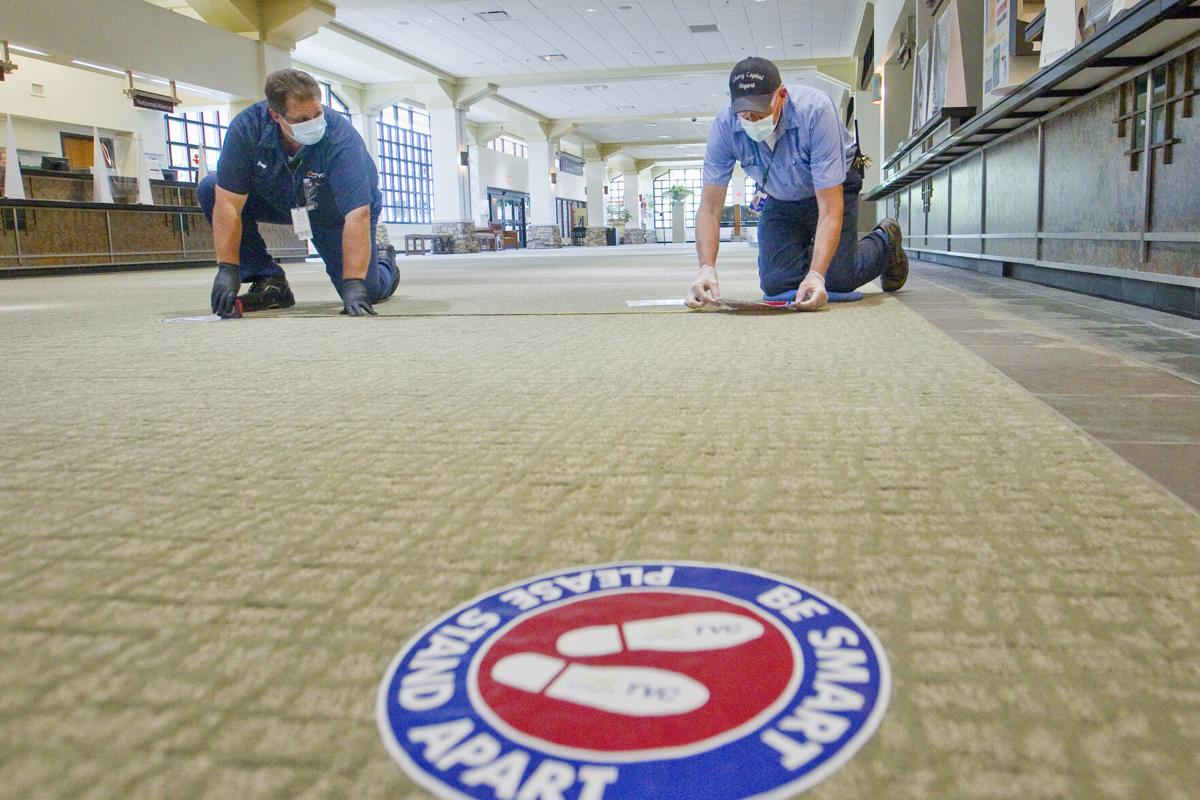 Katie Albert brings an order to customers seated in a large tent set up in the parking lot outside Opa! Grill and Taproom in Traverse City in September.

Ken Biles and Jennifer Thompson, of Baltimore, wear masks while walking along River Street in downtown Elk Rapids in July.

TRAVERSE CITY — Businesses and workers in northwest Lower Michigan traveled a rocky road in 2020, jostled by the COVID-19 pandemic and related restrictions.

Businesses that rely on tourism saw a bumpy year as government restrictions first forced people to stay home and later prompted many to spend time outdoors.

Every enterprise that relies on people gathering together was forced in 2020 to rethink its business model. As the year draws to a close, many businesses still are struggling to survive, grasping for ways to keep rolling until the pandemic fades into memory.

Service workers’ toil provides the traction that keeps the wheels of commerce rolling — without them, investment in facilities, technology and inventory would go nowhere. When pandemic restrictions stepped on the brakes last spring, many service workers found themselves without a paycheck, short on savings, and with bills that kept rolling in. Many were forced to turn to unemployment benefits to keep food on the table and a roof over their heads.

The addition of a $600 federal supplement to Michigan’s maximum $362 in weekly unemployment benefits allowed many workers to stay in their homes until their employers were able to bring them back. The $600 supplement ended. This weeks’ coronavirus relief bill promises to bring back a federal unemployment supplement, this time $300 a week.

Jobs did trickle back across the north as summer blossomed into a better tourist season than some had expected. Michigan’s north operated under lighter restrictions than the more heavily populated metro areas in the south. That difference led to a fairly heavy season for some of the northern region’s tourist businesses.

One sector that bucked 2020’s depressed-activity trend was real estate.

Traverse City for years has been short on housing priced low enough for the average worker to afford. But the area’s population has been growing as more folks decide to live, work, raise a family and retire in a place where woods and waters meet. As a result, demand for housing is high, supply has been getting lower, and prices have been getting higher.

Demand and prices both climbed even higher during the pandemic.

The massive shift in 2020 toward remote work allowed many employees to move away from crowded, expensive big cities and to smaller communities that offer quality-of-life benefits. Some chose the Grand Traverse region as their new homes.

Wildfires in the West, particularly in California, prompted some residents of that state to pick up stakes. Some of them moved to Traverse City in 2020.

When Lansing prohibited indoor restaurant dining in an effort to slow the spread of coronavirus, some converted to serving takeout or drive-up service. But not all were equipped to do that.

“I closed down for two and a half months,” said Patty Kellogg, owner of Patty Cakes Restaurant & Bakery in Buckley.

Patty Cakes wasn’t physically set up to handle takeout service, so Kellogg just locked the door. That meant she sent her entire crew, normally eight to 12 people, home without paychecks.

Emily Hill, 23, a cook at Patty Cakes, said she and her husband stretched their resources to scrape by for six weeks before her unemployment benefits began to arrive.

“For a month and a half, we were living off just his income, which was very difficult,” said Hill. “Once it (unemployment benefits) finally come in, it did help.”

Kellogg had a drive-up window installed and reopened as a takeout-only operation.

Some restaurants closed during the pandemic and will not reopen. Among them are Alliance and The Franklin in Traverse City and Big Cat Brewery in Cedar.

Other eateries adjusted to no-indoor-dining requirements by installing small enclosures, tents or igloos, that legally allowed family groups to dine together outside but protected from the wind. Pangea’s put some geodesic domes on its roof. Iron Fish Distillery in Thompsonville installed a village of tents.

Nationally, the year has been brutal to the restaurant industry. A National Restaurant Association Research Group survey in November showed that 87 percent of full-service restaurants reported an average drop in sales revenue of 36 percent. The restaurant industry normally operates with an average profit margin of 5 to 6 percent, the association stated in a release, so such a large drop is catastrophic. A majority of operators expect sales to be even worse over the next three months, the survey showed.

Many restaurants already have closed. As of early December, the association said, 17 percent of U.S. restaurants — more than 110,000 establishments — have closed permanently or long-term. On average, those restaurants had been in business for 16 years; nearly a fifth had been open for at least 30 years.

Hospitality is a major industry in Traverse City, and it suffered in 2020.

Memorial Day weekend, powered by loosening restrictions in the northern swath of the state, delivered a jolt of tourist traffic that began turning things around for lodging businesses.

“April was dismal,” said Summerside Properties Director of Operations Ron Robinson. “May wasn’t very good — until Memorial weekend. Memorial weekend was good, when everything was opened back up in Traverse City, so there was a reason for people to come, they started coming.”

But larger properties continue to suffer.

“Our full-service properties lost more than 600 events and millions of dollars,” Tkach said.

Many properties still can’t rent all their rooms because of employee shortages, intensified cleaning procedures and legal restrictions on some amenities.

Managers of Traverse City Tourism’s member properties predict that occupancy in 2021 will fall short of 2019 figures, said Tkach. But managers remain optimistic that the Traverse City area will outpace both the competition and the national average next year.

Passenger traffic through Cherry Capital Airport remains depressed. In mid-December, the number of passengers handled by the airport was running about half what it served in December 2019.

The Paycheck Protection Program, part of the federal CARES Act, is a sweeping effort to keep businesses functioning during the pandemic, designed to provide a direct incentive for small businesses to keep employees on their payrolls.

The coronavirus relief bill passed this week by Congress offers as much as $267.5 billion more in a second round of Paycheck Protection Program loans.

In its first round, the PPP provided 3,916 partnerships, sole proprietorships, companies, corporations and non-profits in Antrim, Benzie, Grand Traverse, Kalkaska and Leelanau counties with funding.

Those 3,916 loans — many of which potentially may be forgiven, effectively converting them into grants — delivered nearly $350 million to local companies at a time when they desperately needed cash to keep paying their employees. The loans that rolled out last spring in the five-county area ranged from a few hundred dollars to $6.7 million for Hospitality Syracuse Inc., a Traverse City-based operation associated with a multi-state fleet of 115 restaurants including Taco Bell, KFC, Long John Silvers and Pizza Hut franchises.

In between were loans of varying amounts to a broad cross-section of the local business landscape.

Venture North in May created the Regional Resiliency Program to funnel donated funds to small businesses in its 10-county region. It since has delivered more than half a million dollars to 200 businesses with nine or fewer employees that were adversely affected by the coronavirus pandemic.

The fund started with a $200,000 award from the Consumers Energy Foundation, which later kicked in another $50,000. Other donations flowed in from other sources. Some donations were earmarked by their sources for specific communities, including Manistee and Emmet counties.

Venture North created the Regional Resiliency Program in May 2020.