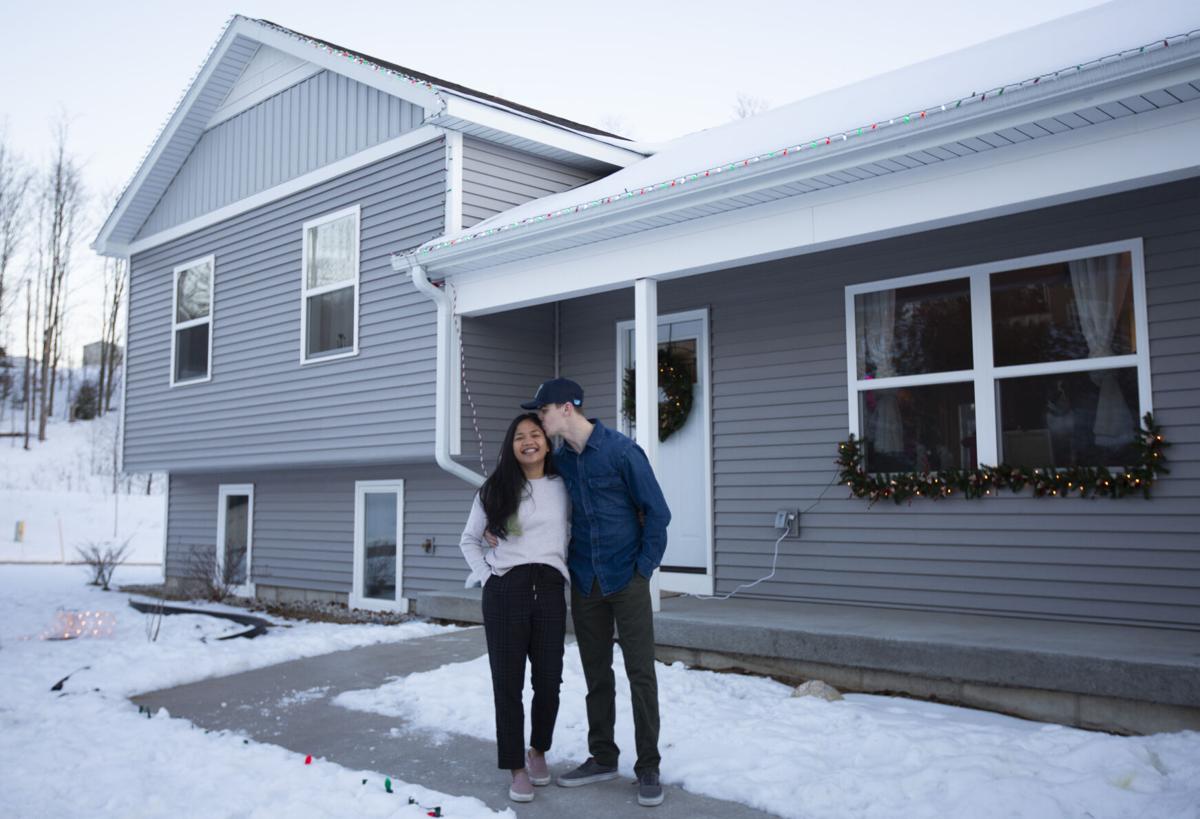 Kyle Neal kisses Fatima Cortez outside their home in Kingsley on Thursday. The couple moved into their new home in July. 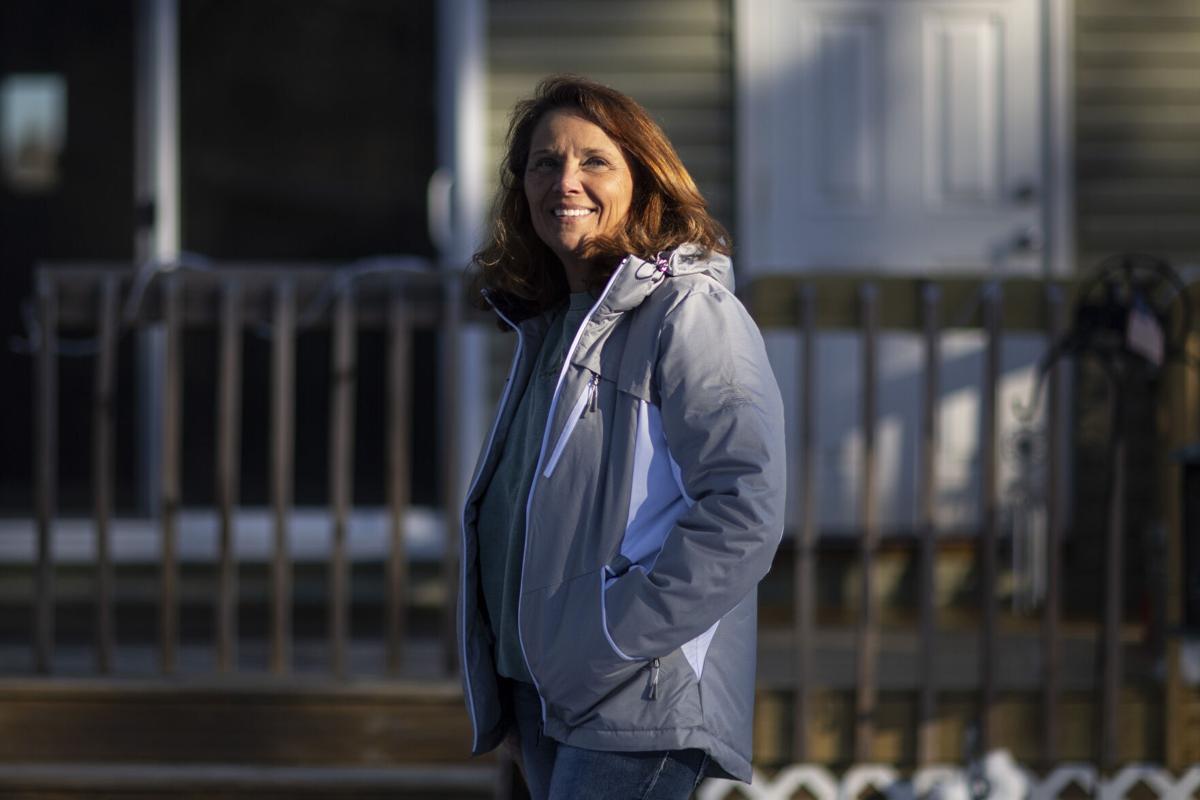 Toni Sober poses for a portrait outside her home in Kingsley on Thursday. 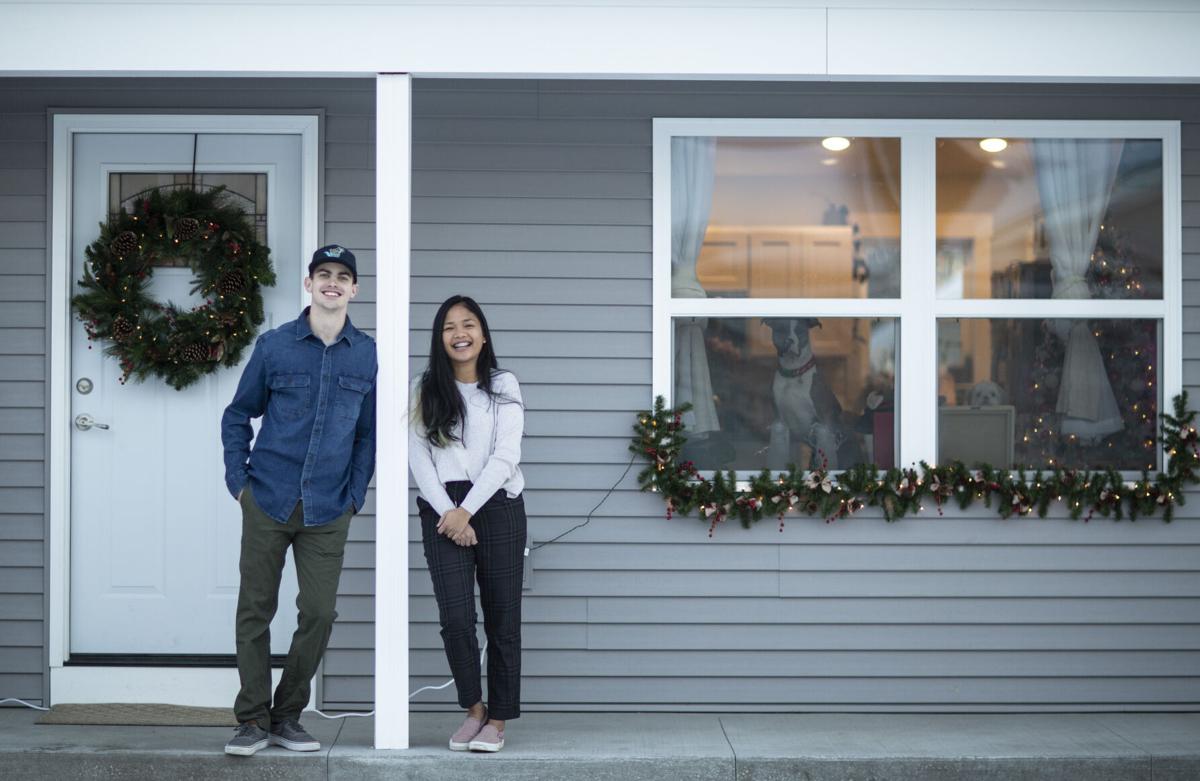 Kyle Neal and Fatima Cortez pose for a portrait at their home in Kingsley on Thursday. The couple moved into their new home in July.

Kyle Neal kisses Fatima Cortez outside their home in Kingsley on Thursday. The couple moved into their new home in July.

Toni Sober poses for a portrait outside her home in Kingsley on Thursday.

Kyle Neal and Fatima Cortez pose for a portrait at their home in Kingsley on Thursday. The couple moved into their new home in July.

TRAVERSE CITY — Kyle Neal and Fatima Cortez began shopping for a house in Traverse City just before the 2020 rush. Some of their Coast Guard peers weren’t so lucky.

“We spoke to a couple of people who are related to the Coast Guard who are living in campgrounds or renting places, just because it’s difficult for them to purchase their own homes,” Cortez said.

She and Neal decided in January 2020 to move from Sitka, Alaska, to Traverse City. They connected with a local Realtor in March. They moved into their new home in July. They know they were fortunate to find a house they liked at a price they could afford.

The COVID-19 pandemic arrived in earnest in March. Lockdowns hit Michigan and real estate sales stalled. But activity soon rebounded. Cortez and Neal dove into their house hunt during the short springtime slowdown.

And then came the pandemic.

Companies across the nation encouraged employees to work from home, and some decided to make that arrangement permanent. Many workers suddenly could live anywhere so long as they had access to high-speed internet. An exodus began, from major metropolitan areas to lifestyle-driven communities like Traverse City.

Housing demand in destination communities like Traverse City burst through the roof.

“Traverse City is the No. 1 growth city in Michigan for 2020,” said U-Haul International Manager of Media and Public Relations Jeff Lockridge in an email. “It had the largest net gain of one-way U-Haul trucks based on our customer transactions over the past calendar year.”

“The pandemic has led to a significant increase in remote work,” said Erich Wuhrman, head of talent acquisition for Traverse City tech startup incubator and co-working space 20Fathoms. “People have found they can do their jobs anywhere now.”

“I’ve noticed, specifically, for young professionals, especially working in technology, they’re leaving large cities like San Francisco and Seattle. We’re starting to see a reverse migration as people are leaving the big cities — the traffic and the congestion — to more remote places like TC.”

Traverse City has been attracting not only fresh faces, but people who are returning home during the pandemic.

“I end up talking to a lot of boomerangs, people that are looking to come back to Traverse City, that are from Traverse City originally,” Wuhrman said.

He recently spoke with potential boomerangs living in New York and Detroit.

Co-working spaces offer services likely to be in demand as more companies distribute their workforces. 20Fathoms, which recently moved to a new location, configured the space to allow for social distancing, installed plexiglass dividers, requires masks in common areas, and stepped up sanitizing efforts.

“While there’s an increased desire to work remotely, many people don’t necessarily want to work from their bedrooms or basements long term,” Wuhrman said.

Toni Sober has lived in Traverse City for 33 years. She always rented or lived with roommates. When she began shopping for her own home about two years ago she hit a brick wall.

Sober is typical of many who work, shop, volunteer and worship in the area, but can’t afford to live here. Available houses were out of her price range. Those within her range needed too much work or were too far away from Traverse City.

That changed in October when she was invited to a friend’s party and happened to drive by a home with a “for sale” sign on it. The next day she looked at the three-bedroom, two-bathroom manufactured home and put in a full-price offer, knowing that if she didn’t someone else would snap it up.

“Everything I looked at, somebody already put in a bid over the asking price,” Sober said.

This time her luck changed and her offer was accepted the next day. About a month later she moved in.

The home is around the corner from where Sober used to live and is about 10 minutes from her job in payment services at 4Front Credit Union.

Sober has been saving toward a down payment for the past two years and has worked on improving her credit score.

“It just feels like it was supposed to work out like it did,” she said. “I did not think it was ever going to happen. It was totally a fluke.”

She said there are a few things that need to be fixed, but the house has good bones and a lot of potential. She is looking forward to doing yardwork in the spring.

Shannon Hoffman, 35, owns a women’s apparel showroom business in Chicago that helps clothing brands connect with about 350 specialty retailers across the Midwest, including some on northern Michigan.

She moved to Traverse City in May.

“I was just getting tired of city life, and COVID was the perfect storm for me to make the decision to make a change,” Hoffman said.

She appreciates the flexibility of renting a condominium, but said she eventually may buy a house in Traverse City. Running her business remotely so far has worked well.

“I was doing most things from my computer or from the phone, even when I was in Chicago,” Hoffman said. “I still go back for face-to-face meetings. Logistically, it’s been a little bit challenging because I used to be able to run into the showroom when I needed to. Now I can’t just run in.”

She retains one employee in Chicago who can do that. She had two employees before the pandemic.

Hoffman was familiar with Traverse City because she’s originally from the Detroit area and frequently has vacationed in northern Michigan.

Construction and the skilled trades

Home sales in northwest Lower Michigan typically peak in summer, when the region’s natural beauty exerts its strongest pull. The real estate market in most years takes a bit of a breather in winter. But it didn’t this time.

“Anecdotally, while I’ve been here, there has not been a lot of slowdown. There’s still a lot of interest,” said Bob O’Hara, executive officer of the Home Builders Association Grand Traverse Area. “That winter slump when people say, ‘No, I’m sticking with what I’ve got’ — 2020 really threw that for a loop.”

A long-term shortage of skilled trades workers has acted as a drag in efforts to build houses more quickly. The association, for about five years, has been working with Northwestern Michigan College and other local entities to promote construction as a career choice.

“I think the work we’ve been doing to bring young people into the construction industry is starting to pay off,” said O’Hara, who has led the organization for about a year and a half. “We’re starting to hear about some people who are coming into the field and starting to graduate from the trade schools and NMC.

“But we’ve got a long way to go,” he said. “We were in a deep hole. If we went full-bore at that for another five years, we still would not catch up.”

Contractors face more demand than they can comfortably handle with available manpower.

“I got a call from a woman a few weeks ago from downstate, who is looking to move up here,” O’Hara said. “They’re retiring, and they’re starting to look for builders, and they said, ‘Who do you suggest?’ My pat answer for all of those situations is, ‘It’s not who I suggest, but what I suggest. And what I suggest is: Plan in advance.’

“I know of at least one builder who is basically booked through 2022.”

Custom builders, in particular, have full calendars for many months to come.

“A lot of the renovators are in that situation,” according to O’Hara. “I know several of them that have simply said, ‘I’m just not taking any more jobs this year.’ They haven’t got the bandwidth to handle any more.”

A tsunami of factors in addition to the skilled worker shortage — including growing demand and shrinking number of in-town vacant lots — has been driving up the price of single-family houses in the region.

There is no sign that trend of rising prices will change anytime soon.

“Even though last year was our best year ever,” TAAR/Aspire North CEO Kim Pontius said in December, “it looks like we’re well on our way to topping last year’s record of over $1 billion in real estate transactions just in the five-county region.”

On the flip side, most of the company’s trucks that left Traverse City in 2020 went to many of those same big cities. But smaller communities in northern Michigan were also destinations for people moving out of Traverse City. Destination communities, in descending order: Grand Rapids, Lansing, Chicago, Wyoming, Cadillac, Mount Pleasant, Saginaw, Kalkaska, Petoskey and Ann Arbor.

Traverse City’s attractions may be a new discovery for some. But they’re no stranger to those in the Coast Guard. The community long has been a sought-after station for service members seeking a place warmer than Alaska and cooler than Florida.

“Between Sitka, Alaska; and Traverse City; and Clearwater, Florida — between those three cities — we kind of rotate, especially at the air station here,” said Neal, 24.

He was stationed in Alaska for two and a half years. Cortez lived there for five years.

“I was talking to some of the aviators up there,” Neal said. “We were talking about snowboarding and the lakes and stuff like that, and they’re like, ‘Dude, you need to go to Traverse City.’ Just because of the kinds of things I’m into — more of the outdoor lifestyle, the laid-back town.”

Cortez, 28, is a nurse. She landed a job in September at Medilodge of Traverse City. Neal works in the clinic at U.S. Coast Guard Air Station Traverse City.

They’ve acclimated to the area.

“We’ve hit up the lakes, we’ve hit up the town,” Neal said. “This place is absolutely beautiful. It’s everything we wanted and more. We love it. I love it here, man.”

The couple’s real estate search went smoothly in the spring. The Veterans Administration helped connect the couple with a local Realtor, who helped Cortez and Neal tour homes virtually via video chat. They bought a three-bedroom, three-bath house in Kingsley.

“We actually did everything site unseen here,” said Neal. “At that time, the market wasn’t moving at all. We were fortunate.”