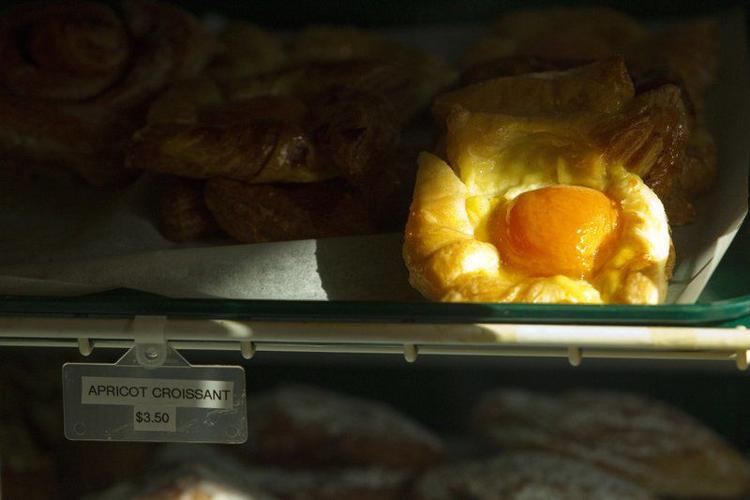 Fieldstone Market and Deli will feature baked goods, like this apricrot croissant, from 9 Bean Rows Bakery. 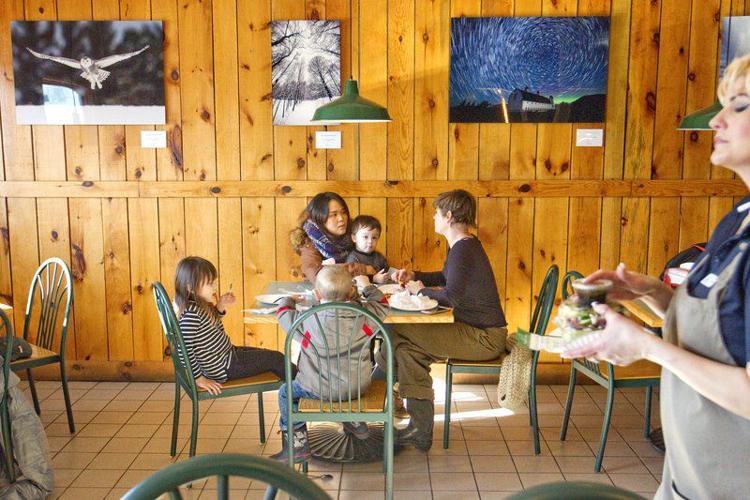 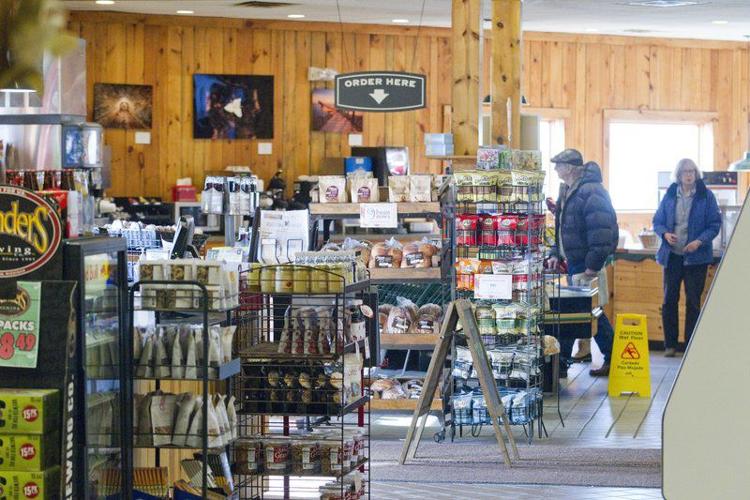 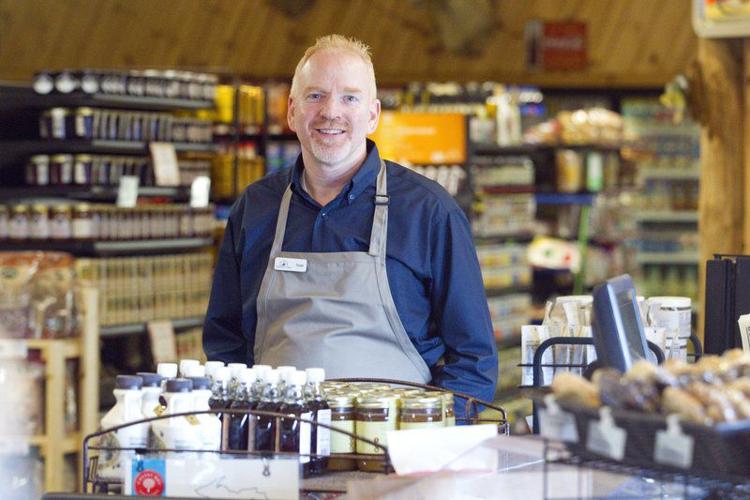 Dave Sears and his wife Jen (not pictured) are the new owner of Fieldstone Market and Deli in Traverse City, and plan to increase the number of local products sold. 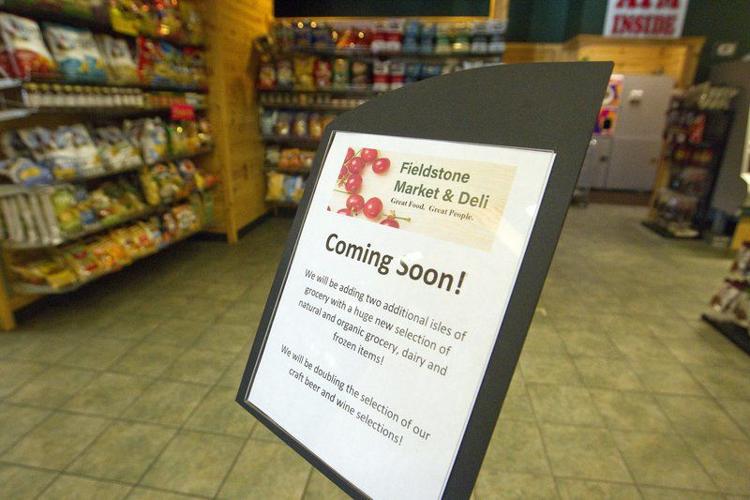 A sign alerts customers to new products coming to Fieldstone Market and Deli.

Fieldstone Market and Deli will feature baked goods, like this apricrot croissant, from 9 Bean Rows Bakery.

Dave Sears and his wife Jen (not pictured) are the new owner of Fieldstone Market and Deli in Traverse City, and plan to increase the number of local products sold.

A sign alerts customers to new products coming to Fieldstone Market and Deli.

TRAVERSE CITY — The farm-to-table movement just showed up on the shelves of a local supermarket.

New Fieldstone Market & Deli owners Dave and Jen Sears have made changes in the seven weeks they've operated the store and have even bigger future plans, all of which Dave Sears says involves bringing a "healthy eating, whole foods" focus to the Traverse City's west side.

Dave Sears, who has more than 20 years of experience in the supermarket industry, wants Fieldstone to become a destination for quality local and state food products in a convenient 6,000-square-foot location.

"As consumers are getting more and more educated, they realize how process foods are not good for us," he said. "That's why you see the Whole Foods and Lucky's growing exponentially while a lot of traditional supermarkets are folding. So we really have this vision of bringing that concept to the Long Lake area."

As advertised on the sign along North Long Lake Road, Fieldstone carries 35 flavors of Moomer's Ice Cream. The market also will exclusively use Moomer's milk when the Sears adds a "high-end coffee shop."

Sears also has added Nine Bean Rows bread and bakery products, which eventually will expand into a permanent display at the front of the store. Nine Bean Rows will move its wholesale baking operation into Fieldstone while keeping its bread-baking operation at its own facility on M-204, two miles west of Suttons Bay.

"The partnership involves us moving our wholesale baking into this infrastructure, then working with Dave to get our product to the consumer through his retail outlet," Nine Bean Rows co-owner Jen Welty said.

"It was a no-brainer to talk to them about working together," he said about Nine Bean Rows and Moomer's.

Working with local distributors like Cherry Capital Foods and Food for Thought made even more sense for Sears. Other local staples like meats from Gallagher's, Omena Organics, the Redheads, Great Lakes Potato Chips and Naturally Nutter further the message. Even trash disposal and snow plowing was done with a local eye.

"We have some of the best food manufacturers and growers right in our own backyard," Sears said. "Local people like to support local businesses and we want to do the same."

Beyond the local focus is a state focus, still with the same emphasis on quality. The amount of craft beer and high-end craft wine doubled. Spirits from Michigan are emphasized. Sears said plans are also in place for "an old-fashioned soda bar" with Northwoods products.

"We're trying to source the best-quality food, as much clean, natural, organic products as we can," he said. "It's not going to be 100 percent. Our grocery section, we're changing that to where 80 percent is organic, gluten-free, dairy-free type products.

"We brought in over 200 Michigan-based products just in the first seven weeks."

Known for its sandwiches and pizza, Sears said Fieldstone will continue to have deli offerings. That is also scheduled to expand with gourmet to-go meals, gluten-free chicken tenders with sauces and an olive bar with high-end cheeses.

Fieldstone currently has 16 employees and Sears plans to hire "10 to 20 more" by the summer, several of which will work in the coffee shop. Sears said employees were given Christmas bonuses when the couple took over ownership. Pay increases, paid vacations and paid holidays followed.

Sears said he wants to add health care and free gym memberships for employees within a year.

"What sets businesses apart is how you treat people — not just your employees, but also your customers," he said. "When you treat your employees well and really look out for them, you don't have to worry about how they'll look after the customer."

Interior changes will make Fieldstone more "family friendly," Sears said. He also plans to rework the interior by adding softer seating around a fireplace where he plans to hang a sign that says, 'Everybody has a story and everyone's story matters.'

"We want this to be a gathering spot where people want to come and gather around good coffee and good food," Sears said. He would like to host an outdoor farmers market during the summer.

"He is as committed as (husband) Nick and I are to actually bringing real farm food in a way that's easy for them," Welty said. "You don't have to shop at a farmers market to get our food; you don't have to belong to a CSA to get this stuff. You can come to a local convenience store and that's what we should be doing all over the area. It should be easy."

Sears doesn't envision Fieldstone as a replacement to stores like Lucky's Market, Oryana or Edson Farms, but as a complementary piece that's more convenient for the customers, first on the west side of Traverse City and someday in other surrounding areas and other northern locales.

"That is part of our long-term plan," he said. "We feel like we can duplicate this."

TRAVERSE CITY — A closed school building recently has been anything but quiet.