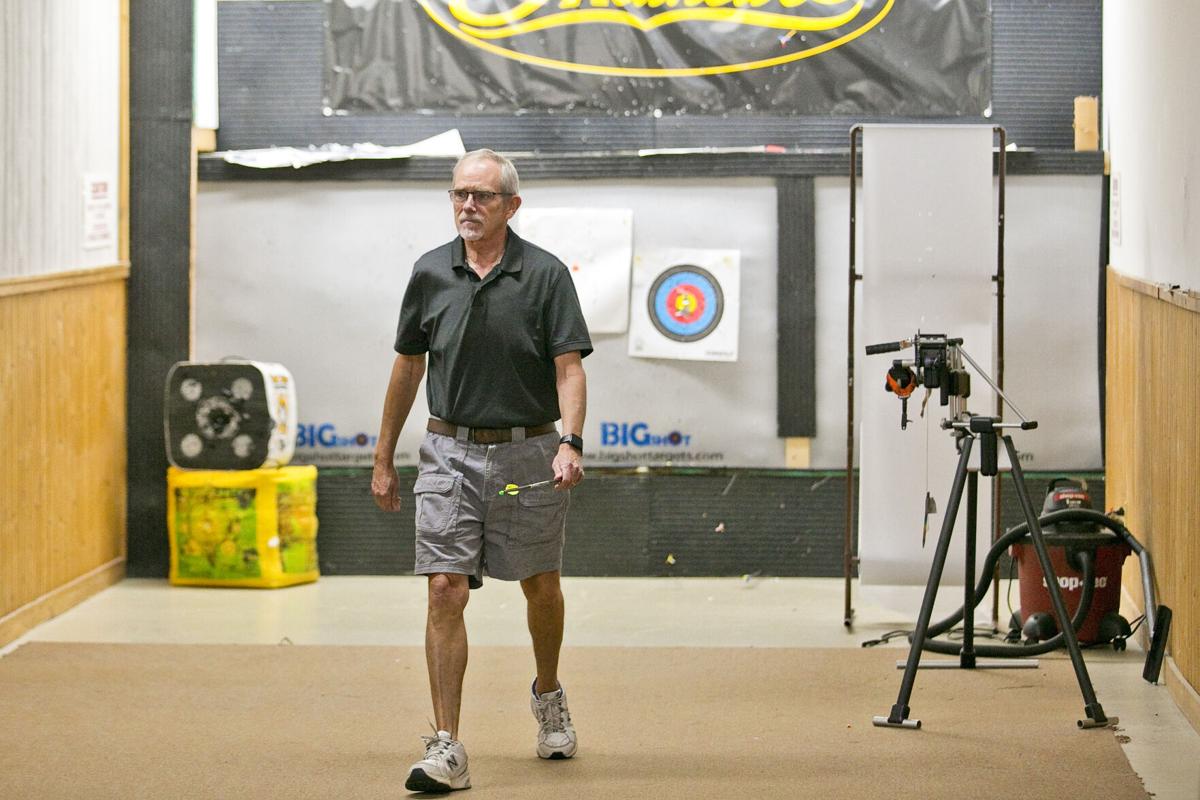 Jim Gauthier walks back from a target with a customer's arrow while working with them in one of Gauthier's Archery indoor ranges. Gauthier recently sold his business to Greg McDonald. 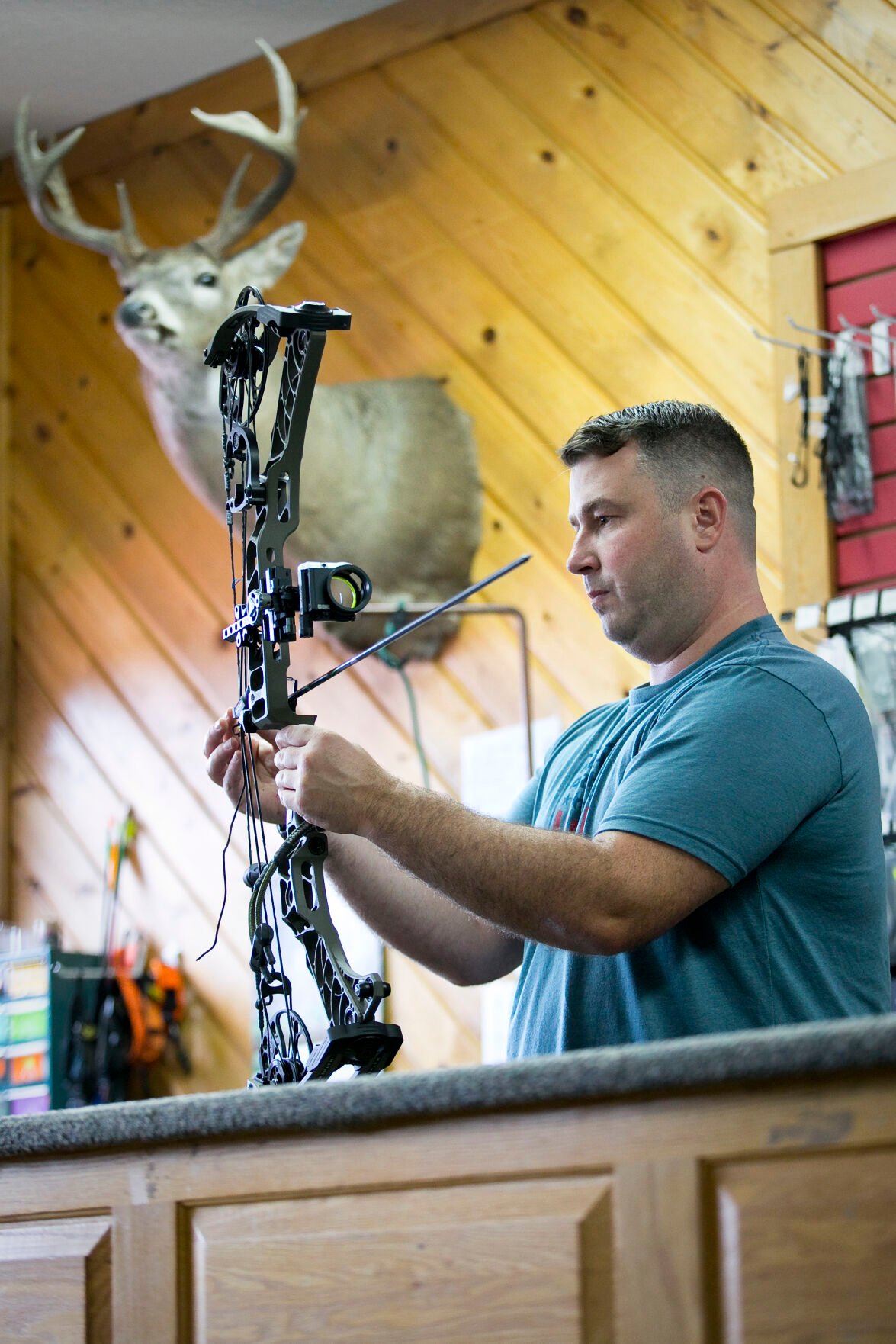 Greg McDonald works on a customer’s bow at Gauthier’s Archery in Traverse City, which he purchased from longtime owner Jim Gauthier. 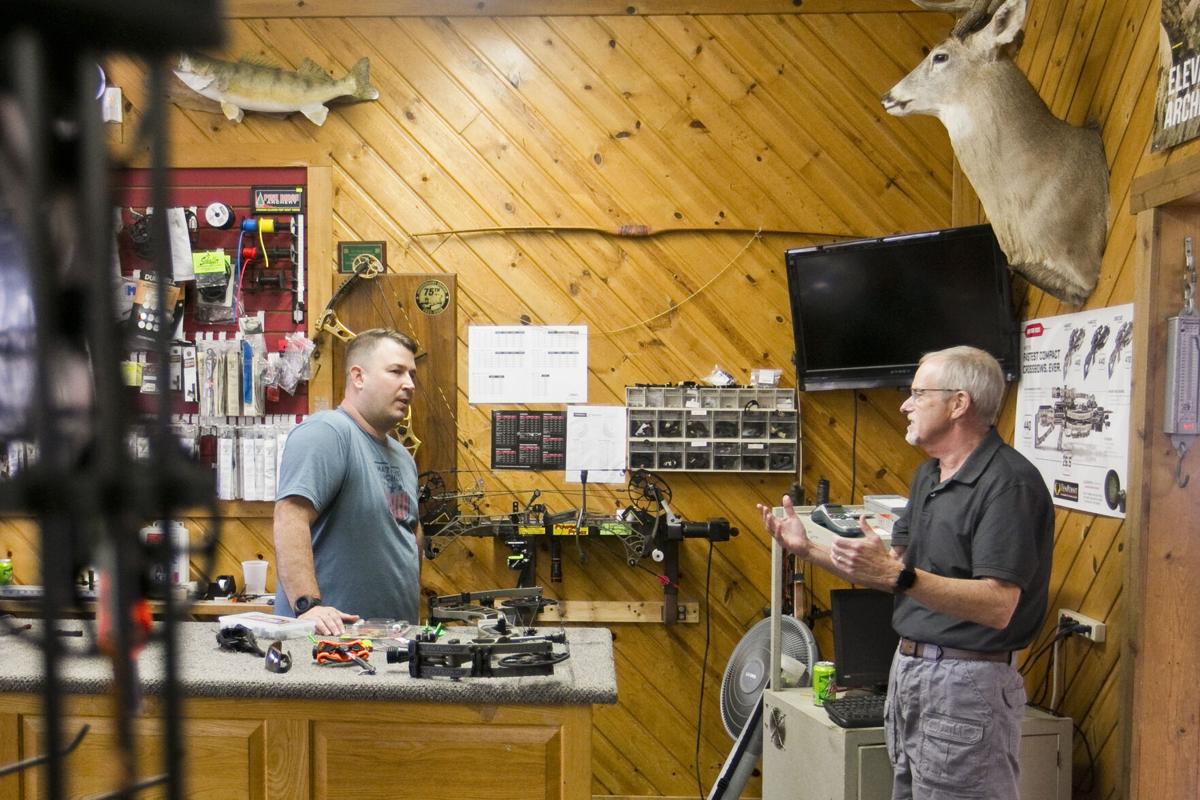 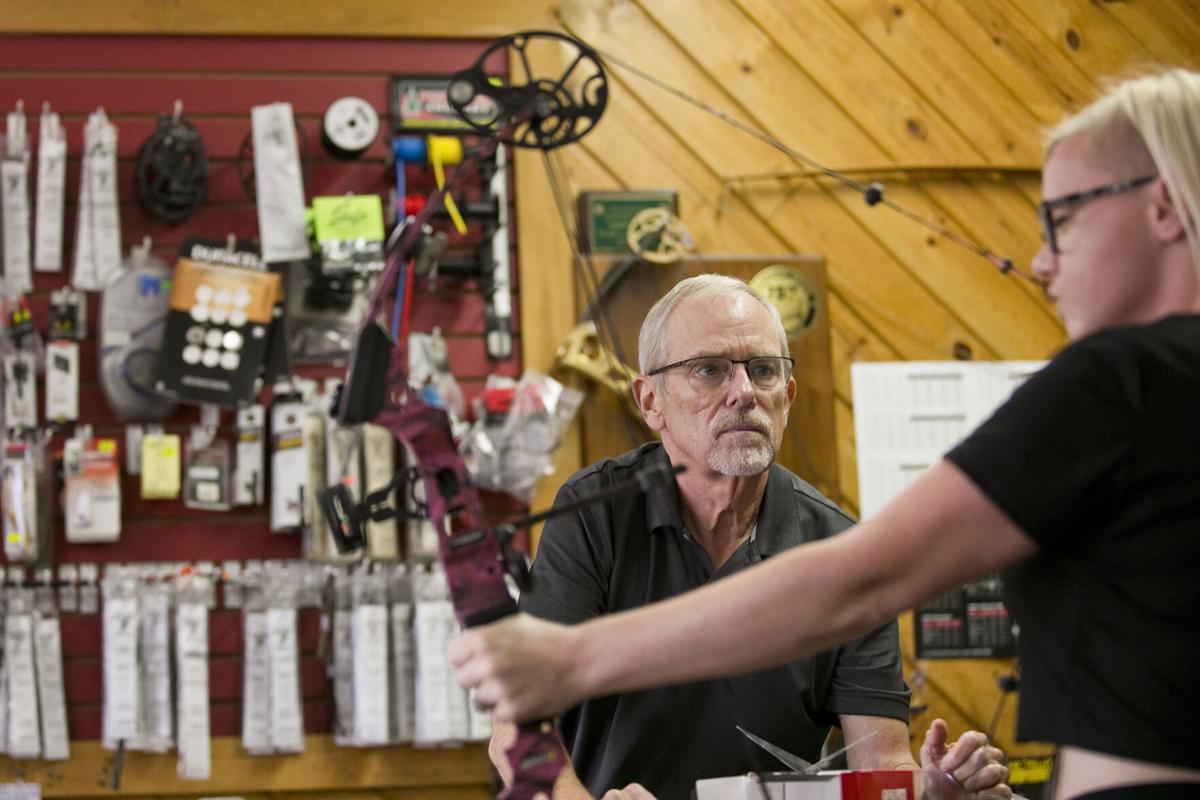 Jim Gauthier works with Selena Hudson and her bow at Gauthier's Archery in Traverse City. Gauthier recently sold his business to Greg McDonald. 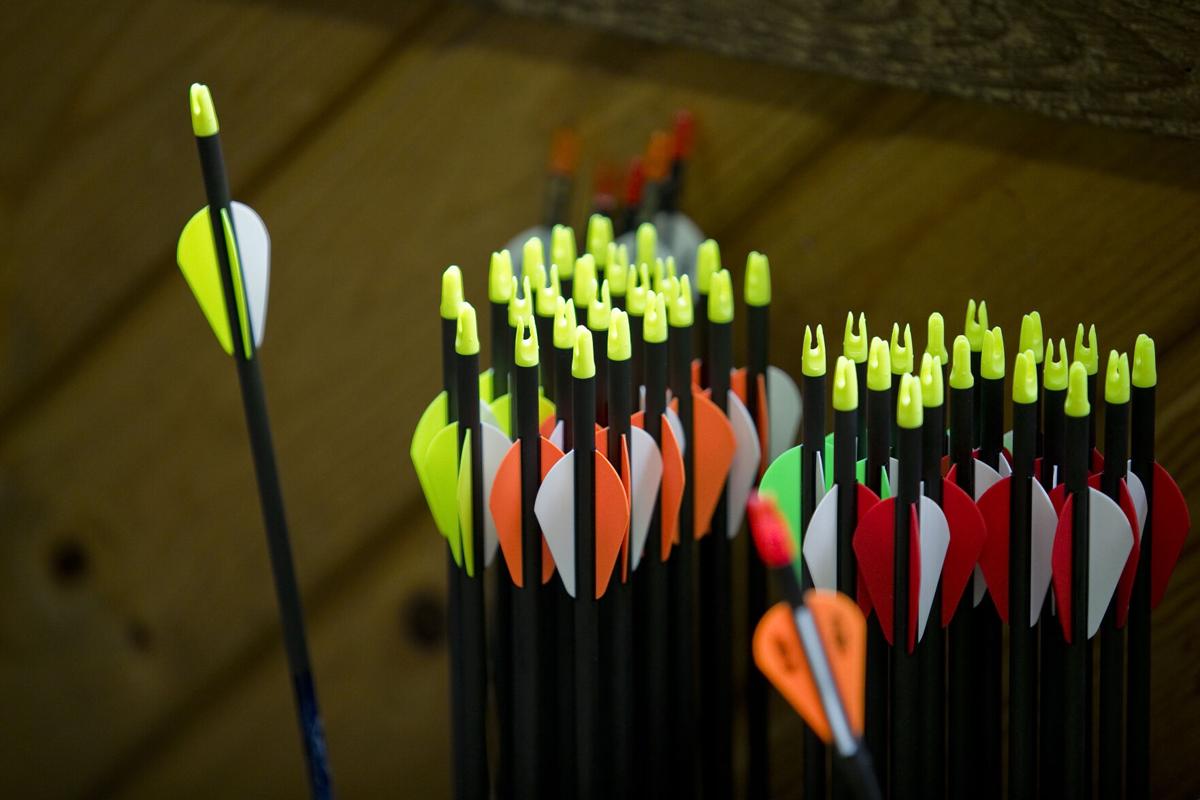 Arrows in a box at Gauthier’s Archery in Traverse City. 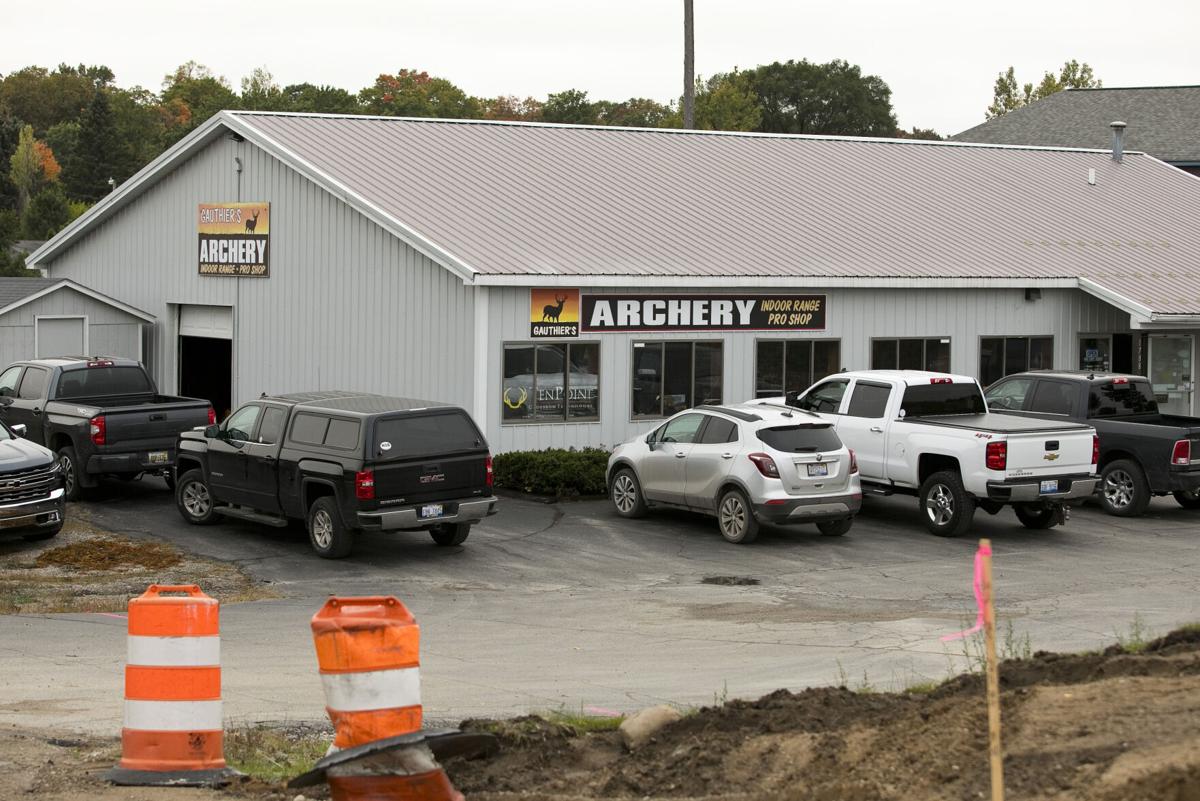 Gauthier’s Archery in Traverse City currently has a temporary driveway during the construction of a roundabout at the intersection of M-37 and Vance Road.

Jim Gauthier walks back from a target with a customer's arrow while working with them in one of Gauthier's Archery indoor ranges. Gauthier recently sold his business to Greg McDonald.

Greg McDonald works on a customer’s bow at Gauthier’s Archery in Traverse City, which he purchased from longtime owner Jim Gauthier.

Jim Gauthier works with Selena Hudson and her bow at Gauthier's Archery in Traverse City. Gauthier recently sold his business to Greg McDonald.

Arrows in a box at Gauthier’s Archery in Traverse City.

Gauthier’s Archery in Traverse City currently has a temporary driveway during the construction of a roundabout at the intersection of M-37 and Vance Road.

TRAVERSE CITY — The first Monday in October was understandably busy at Gauthier’s Archery.

Behind the counter, Greg McDonald was working on a compound bow. Next to him, Jim Gauthier was repairing a crossbow. One side of the counter had the new owner of the archery shop, the other had the former.

It was business as usual.

Even though the transfer of ownership took place at the end of July, the start of Michigan’s archery season Oct. 1 felt like a more official transition at the business that humbly began in the basement of a downtown Traverse City building in 1980 and grew into “the oldest-serving archery-only pro shop in the state,” according to Gauthier.

“It’s been a great career,” the 66-year-old Gauthier said of the business he started July 22, 1980 in the basement of what is now Amical and sold to McDonald July 29, 2021. “Not bad for a guy that graduated second from the bottom of his class (from Traverse City St. Francis).

“It’s three-quarters of my life basically.”

“Every customer that comes in has a story about Jim,” McDonald said, standing outside the home of Gauthier’s Archery since 1990, less than a mile south of Chum’s Corner at 1788 M-37. “That’s a credit to him being able to operate that long and have customers come back year after year.”

Those customers will continue to find everything aluminum arrows to yarn tassel. And those loyal to Gauthier’s won’t have to wonder what the new store is called.

“The name’s going to stay,” McDonald said. “Not much is going to change. There will be some little tweaks, keeping up with the new technology.

“But it’s going to stay completely archery; we’re not going to start carrying guns or anything. We’re going to stick with one thing and be really good at what we’re doing.”

There will still be compound bows from Mathews and Hoyt Archery for sale at Gauthier’s. Crossbows from TenPoint, Raven and Mission will still be available for purchase. A wide selection of arrows from the likes of Easton and Victory.

“Having the best brand names helps,” McDonald said. “It’s the top of the line across the board in the store.”

Gauthier nearly sold the 3,500-square-foot business on 2½ acres in 2019, but the deal fell through when COVID hit.

Several other possible deals also didn’t work out, something Gauthier is thankful for in hindsight.

“We’ve been working on it since the beginning of the year basically, the end of last year,” said Gauthier, who added McDonald’s passion for the place set him apart. “I had several offers on the place, but he seemed like the best fit.”

McDonald said he visited Gauthier’s Archery as a customer last October and was left impressed with the timely service he received. He then visited his brother, who told him Gauthier’s was back on the market.

That was all McDonald, who has been hunting since he was in his early teens, needed to hear. It didn’t take long for the man who signed up for the National Guard the day after Sept. 11 and served 6 years in the Army, including Irag, to react.

“Immediately it clicked in my head being an outdoorsman and active in archery all my life,” McDonald recalled. “I always wanted to do something in the business of hunting. I told my wife, ‘If we can make this work, it’s my dream job.’ Talking hunting and getting people prepared for hunting season, it doesn’t get any better than that.”

McDonald — who has owned Verano Tan since 2017 and Bliss Tanning Studio since the summer of 2020, both on Eighth Street — was soon the owner of an archery store.

“I came in here as a customer,” McDonald said. “I didn’t know about the customer base and how big of a small operation this is. It’s been a good couple of months for us. I couldn’t ask for anything more.”

Gauthier says the same thing about when he owned the business, able to turn his love of the outdoors into a life-long career. But it also came with some big bumps along the way.

Gauthier’s first taste as a business owner came at Field and Stream on State Street in Traverse City. That lasted three years.

“I was bankrupt by (age) 25,” he said. “It was the best education I ever had. I did everything the opposite that I did and here I am today.”

The biggest lesson, Gauthier said, was to be the only person in charge.

“I had three partnerships and they all failed,” Gauthier joked. “One was a marriage, one was a cabin and one was a business.”

The other lesson Gauthier learned when he opened his own archery store in 1980 was to give the customer the upmost service. Gauthier said he always tried to greet a customer the first three feet inside the store, even if he was busy helping someone else.

Gauthier said he kept a book where he recorded the name, date and type of bow sold. It proved valuable if a part was lost or broken, but also to forge “some fantastic relationships.”

Gauthier estimates he’s sold “upwards of 20,000 bows and crossbows” during his 41 years in business. But he also realized more customers were asking to speak to his “tech guy” at work, Eli Purvis.

“It was time,” Gauthier said. “I started to get to the point that the technology was passing me by.”

Gauthier said the archery shop has some seasons to it. He said there are 100 people who participate in shooting leagues, which he equated to bowling, from January through April. The business really picks up as the start of Michigan’s archery season approaches on Oct. 1.

“I turn over the inventory 4-5 times a year, 2-3 times in September and October,” he said.

Not owning the store has allowed Jim Gauthier some different opportunities in 2021.

He already has a wild boar hunt in Tennessee planned for later this month with daughter, Lauren Gauthier. Then there’s a stay in Florida this winter with his wife, Terri, that will be for a month or more.

“I can’t complain,” he said. “It’s been a great life. Now I have time to do things I haven’t before. I can go hunting. I can go hiking and biking and spend time with my wife.

“I went small game hunting for the first time in probably 30 years on opening day (Sept. 15). I missed that, just going out and walking in the woods.”

Gauthier said he also misses the loyal customers. That’s why the former owner said he’s only a phone call away and ready to hop behind the counter.

“I’m kind of bored at this point,” Gauthier said with a laugh, while admitting that McDonald “is the guy who can take it to the next level.”

“I miss it. I miss visiting with the customers. It’s still a lot of fun to work with people.”

McDonald said he appreciates having him a phone call away, saying that if he called Gauthier as he prepared to drive away Monday afternoon, the namesake of his business would quickly turn around, even if he was already late for an appointment.

“He’s been 100 percent supportive,” McDonald said. “If I need anything, I just have to call him. That support isn’t something you see that much these days.”

TRAVERSE CITY — Archery has been around for so long it’s difficult to pinpoint its origins.