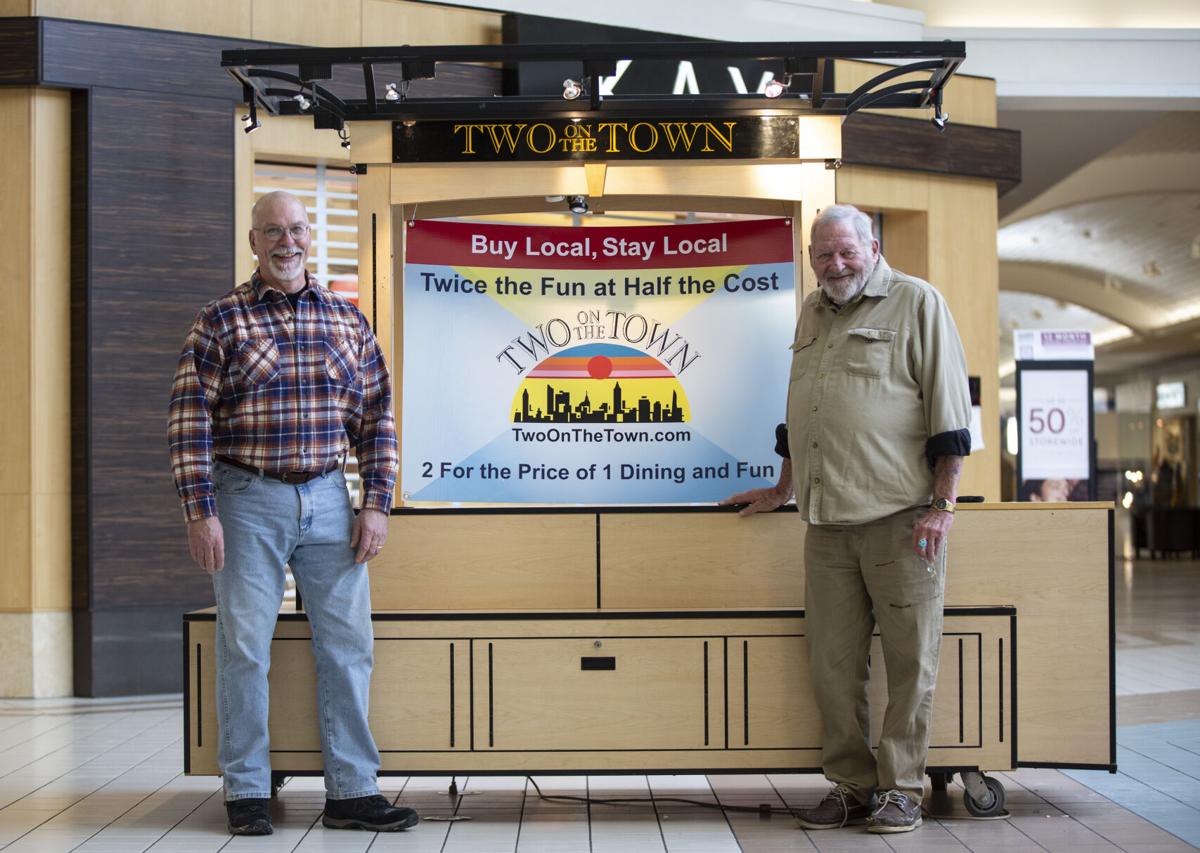 Jim Rowland and John Rodge pose for a photo with the Two on the Town kiosk at the Grand Traverse Mall in Traverse City on Wednesday. 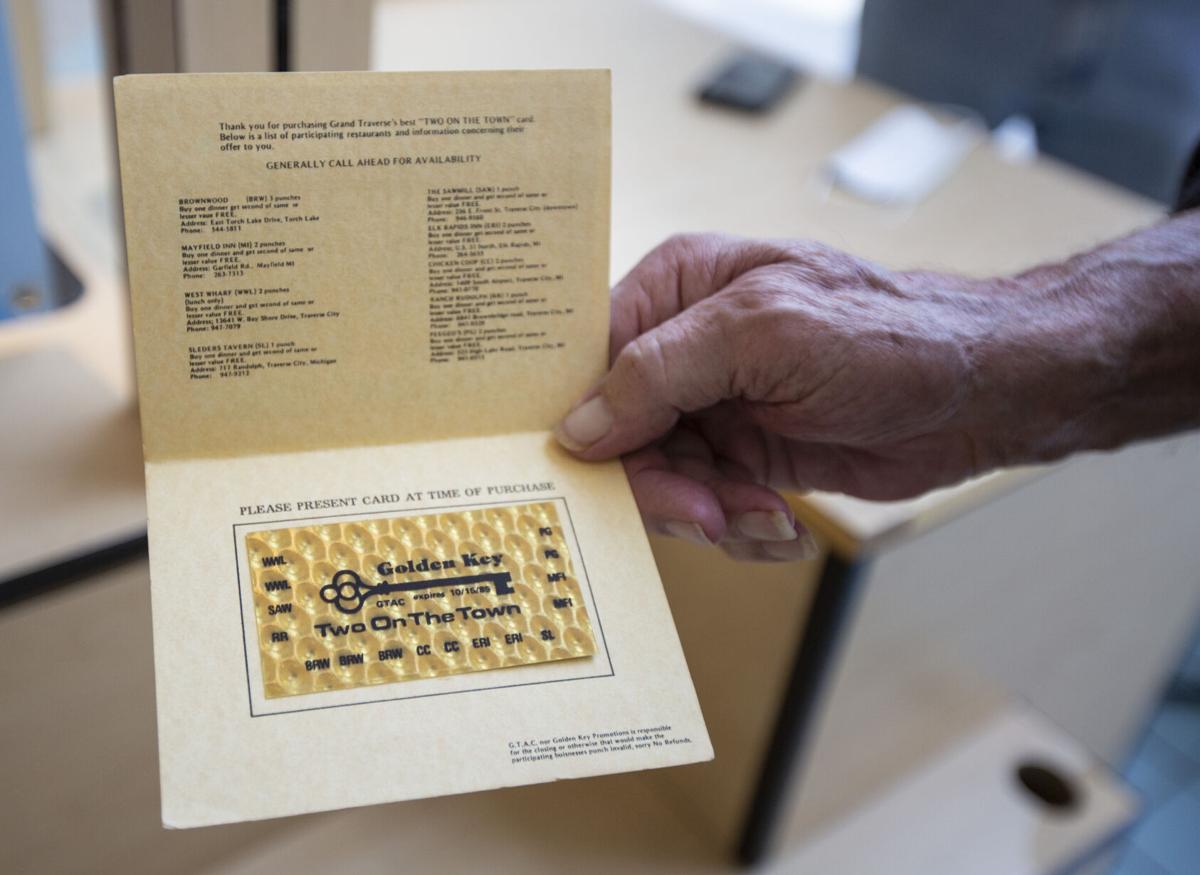 John Rodge holds an original Two on the Town voucher at the Grand Traverse Mall in Traverse City on Wednesday.

Jim Rowland and John Rodge pose for a photo with the Two on the Town kiosk at the Grand Traverse Mall in Traverse City on Wednesday.

John Rodge holds an original Two on the Town voucher at the Grand Traverse Mall in Traverse City on Wednesday.

TRAVERSE CITY — The business is being transferred. The trademark 922-2222 phone number is changing hands.

The title will forever be his, even though some people aren’t aware of the name behind it.

“A lot of people don’t know who I am other than Mr. Two on the Town,” John Rodge said. “It’s been a vital part, an important part of Traverse City and the surrounding area.”

After 38 years running the Two on the Town dining and entertainment marketing program, Rodge sold the business to Jim Rowland. The owner of Willie’s Rear signed the paperwork last month, will transition to taking over the Traverse City territory, and officially will take over the helm May 30.

Even though Rowland will be the new person in charge of Two on the Town, he said Rodge will continue to be involved in some capacity — and will retain his title as Mr. Two on the Town.

“There’s no doubt about it,” Rowland said. “He’s shown that in 38 years. Everybody knows him.”

The thrill of working with area businesses was what kept Rodge going for nearly 40 years. But the 76-year-old is ready to step away.

“The only reason I’m selling it because it’s time,” Rodge said. “It’s been an exciting ride.”

Rodge said his “first adventure in marketing” came in 1982 when he started Golden Key Productions and the Golden Key coupon book.

The following year, Rodge rolled out the Cherryland Playbook.

“It didn’t meet with much success,” Rodge admitted. “But it was a forerunner to Two on the Town.”

In 1984 Rodge launched Two on the Town and it’s been rolling ever since. Rodge said it came along at the right time in Traverse City.

“(Dining) was really growing at the time and needed it,” said Rodge, who had been a teacher for 12 years (11 at Suttons Bay beginning in 1969). “That’s when Two on the Town was created.”

Crusted Creations, which opened in 1980, “has been been involved with him as long as he’s done it,” owner Craig Greening said.

Participating was an easy decision, he said.

“It’s kind of a cool thing,” said Greening. “Being pizza, they just take it to go, they don’t sit down and eat it. So it’s buy one pizza, get one free.

“It’s really nice. It brings in new people every year, which was what I like about it.”

Rowland also knows how the program can benefit a restaurant. Willie’s Rear, which was launched in 1978 by Bill Sternberg on the back of the Hillside Plaza, has also been a long-time participant. Rowland bought and ran the restaurant from 1990-99 and again from November 2010 to the present.

“It’s very easy for me to sell it because I’ve always been on it,” Rowland said. “I understand the benefits for merchants to be on it.”

Rodge said trust works both ways at Two on the Town.

It’s simple to use. According to the Two on the Town website, the ‘rules’ are:

An 18-20 percent gratuity is recommended to “treat the wait staff fairly as they are there to serve you and make your experience better.” A two-beverage minimum purchase is also requested at restaurants.

Rodge said he likes to think of Two on the Town clients as friends. Greening and Rowland agree.

“Being in the business like I am, I don’t want to talk to a salesperson,” Rowland added.

Besides, Rowland doesn’t have a lot of free time. In addition to running Willie’s Rear and taking over Two of the Town, he’s active in the Benevolent and Protective Order of Elks.

Rowland is currently the first vice president of the Michigan Elks and will become president on May 22, a little more than a week before he officially takes over Two on the Town.

The transition from Rodge to Rowland also won’t be drastic. Rowland has operated the Cadillac-Big Rapids territory for a couple of years. Before he took over the entire company, Rowland purchased three other territories from Rodge.

“It’s a very natural thing for me to do,” Rowland said. “It fell right in line.”

Rodge said that at one time Two on the Town had six different territories. There was even a junior edition for a couple of years.

“We’ve had our fingers in the game in a lot of different areas,” Rodge said.

As with a many local businesses — and restaurants in particular — 2020 was a tough year. Rodge said sales in 2020 were half of normal.

“Last March when things were (shutting) down, I didn’t think it would go into this year, but it did,” Rodge said. “And then during Christmas, all the restaurants were closed.”

Rodge said sales picked up in February, but added he’s usually about sold out by then. Rodge, who said he’s advertised in the Record-Eagle for 35 of his 38 years with Two on the Town, said he’ll conduct a close-out sale close-out sale on 2020-21 cards, from Feb. 25 through March 14.

That’s one of the reasons Rodge is staying on until May: finishing up with the 2020-21 cards before Rowland begins on the 2021-22 edition.

“Not at all,” Rowland said. “Hopefully we make it bigger and better, but hopefully they’ll never know it’s not John doing it. I hope it (runs) on an even keel.”

“It’s been a vital part, an important part of Traverse City and the surrounding area.” John Rodge