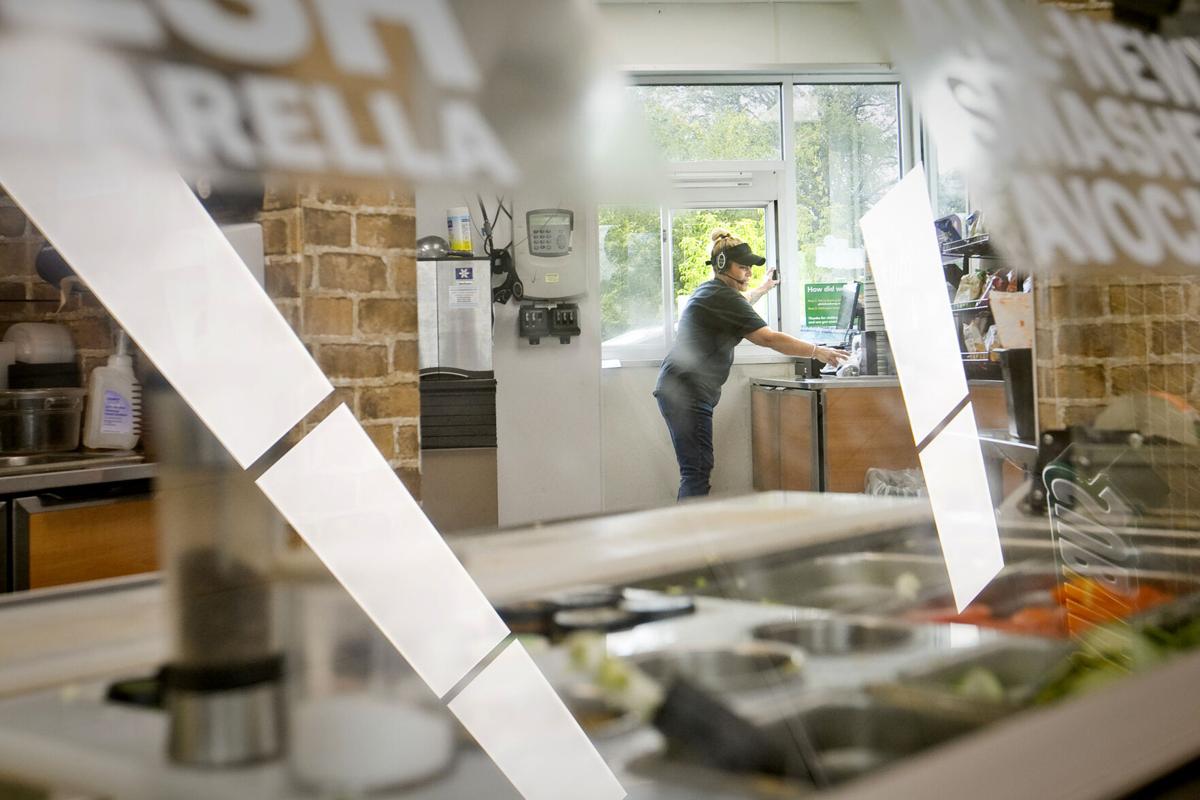 Beth Hentschel works alone at the Subway at the corner of Garfield and Hammond roads in Traverse City. Hentschel said that a lot of her customers have been understanding and supportive as she handles online, drive-thru and in-store orders. 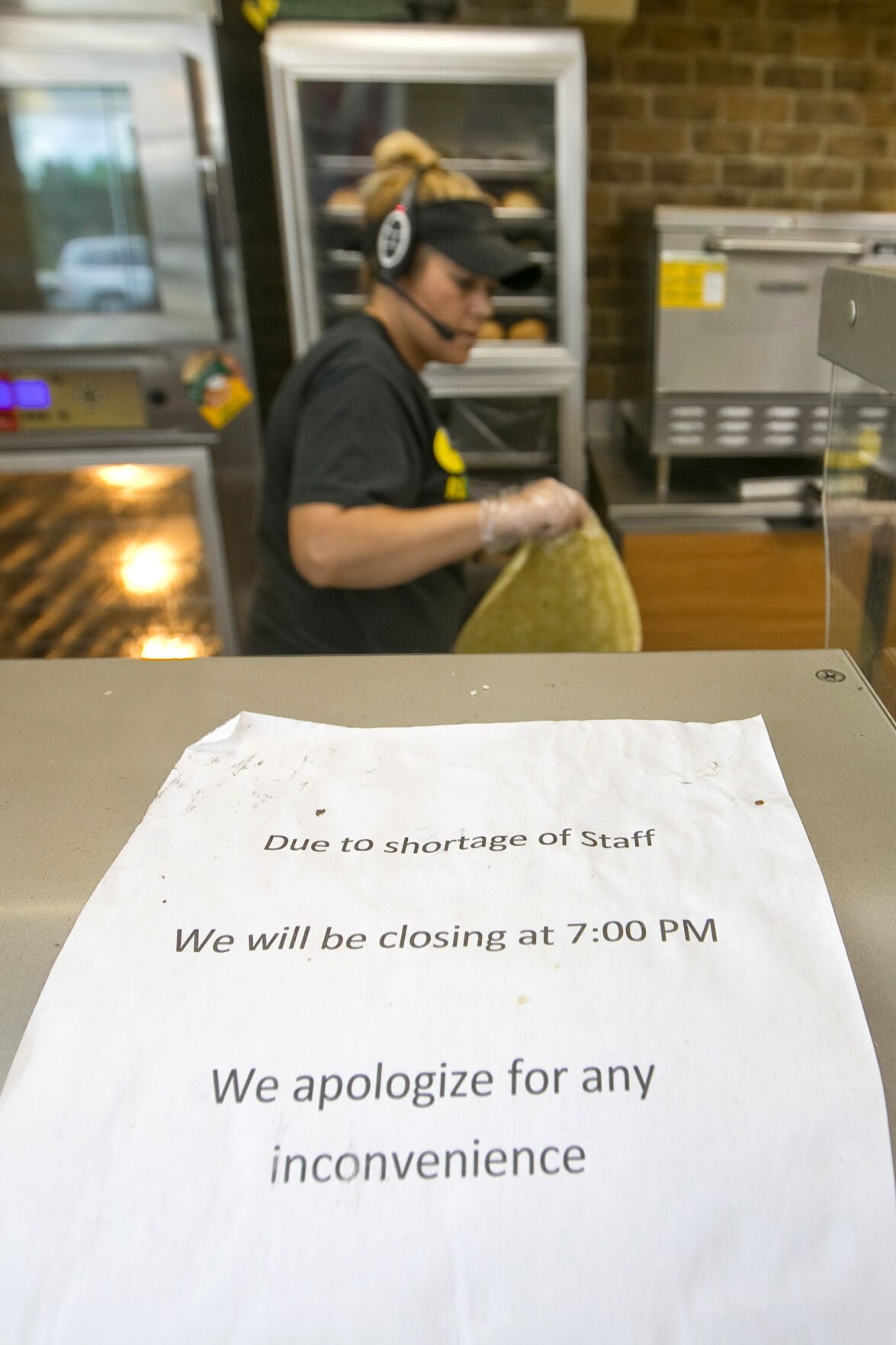 A sign posted inside the Subway at the corner of Garfield and Hammond roads in Traverse City announces shortened hours of operation due to a staff shortage. 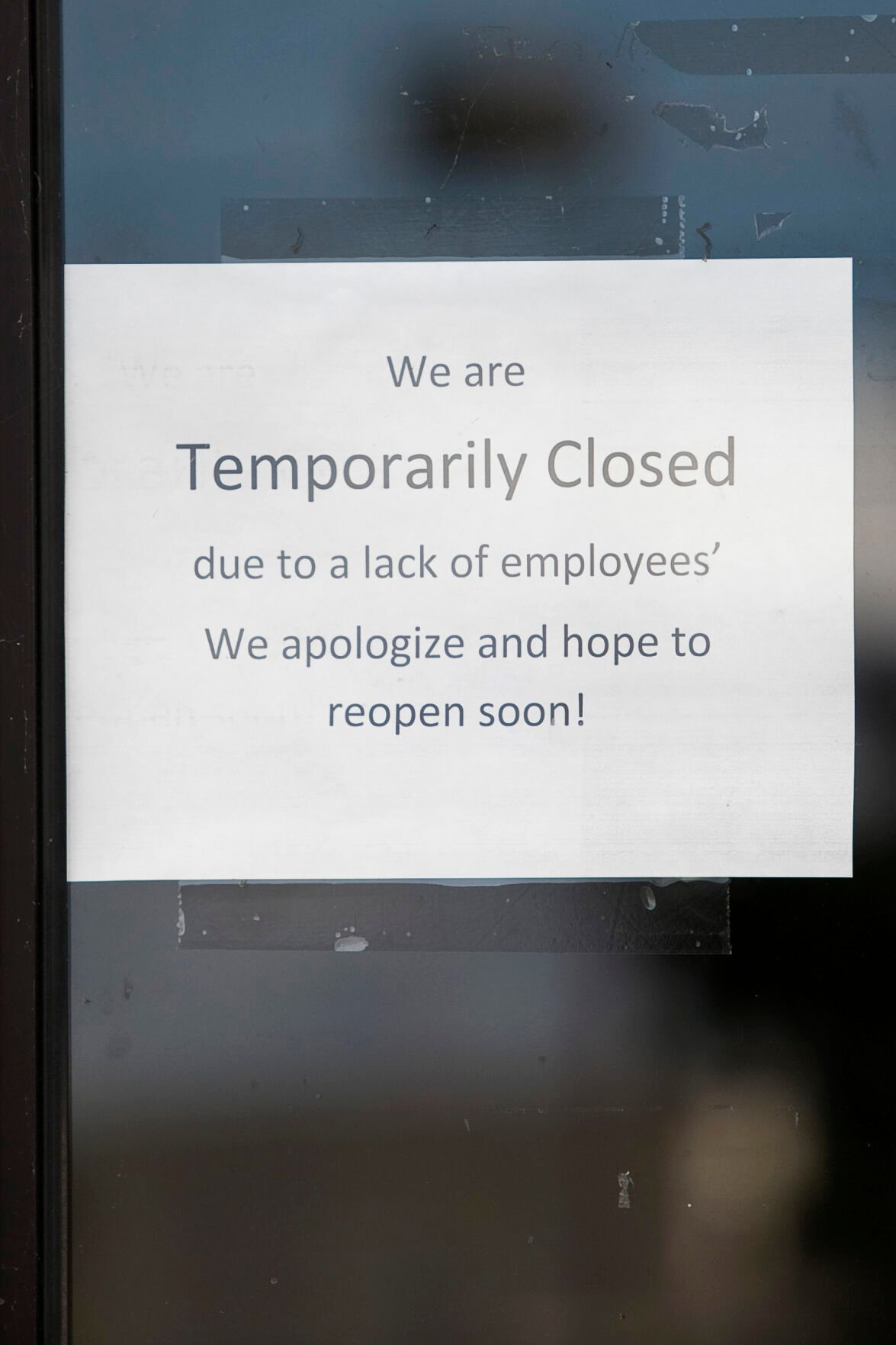 A sign posted on the door of Grand Traverse Pet Supply on South Airport Road in Traverse announces its temporary closure due to a lack of employees. 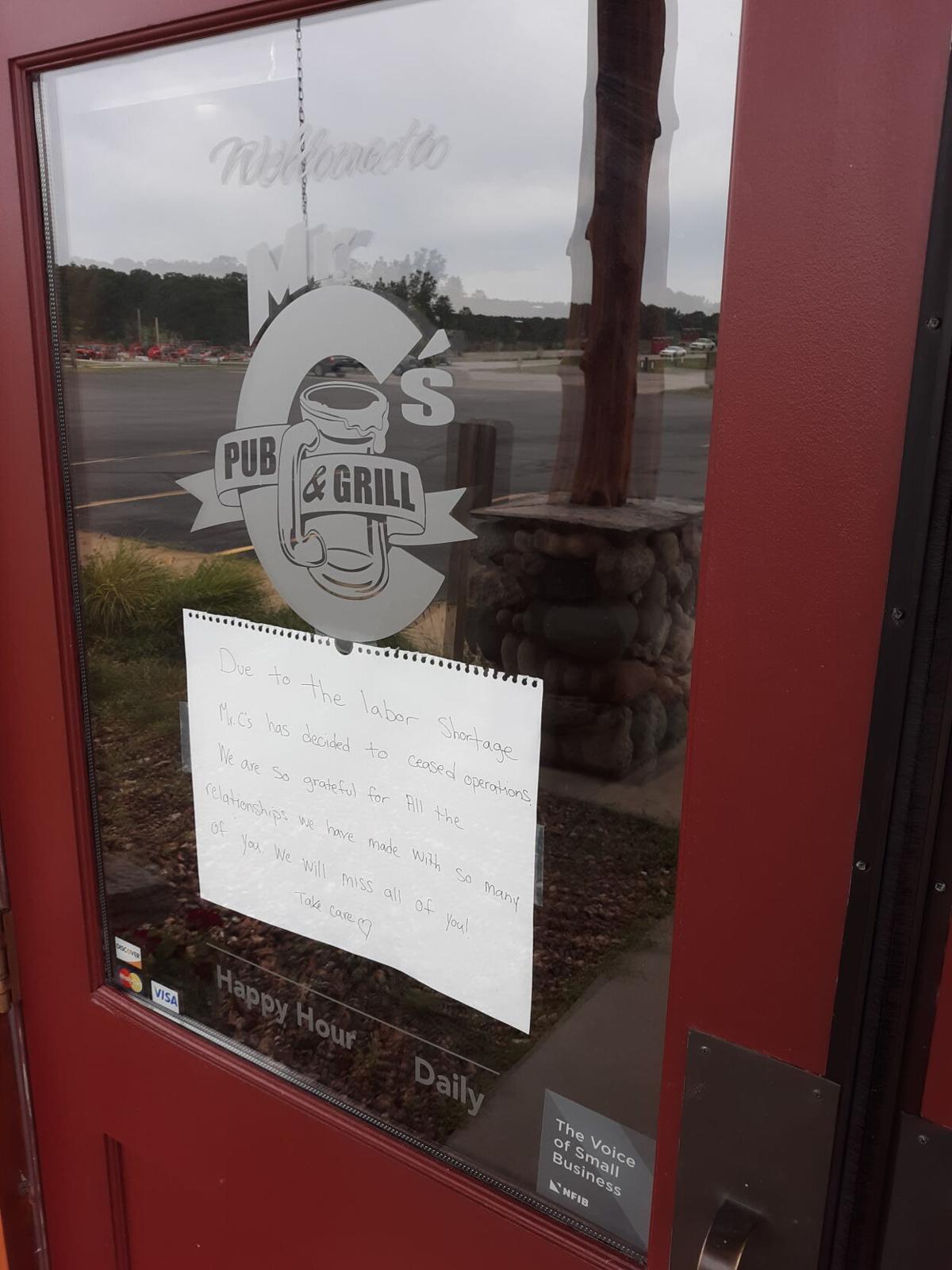 This sign at Mr. C’s Pub & Grill states the restaurant has closed because of a labor shortage. 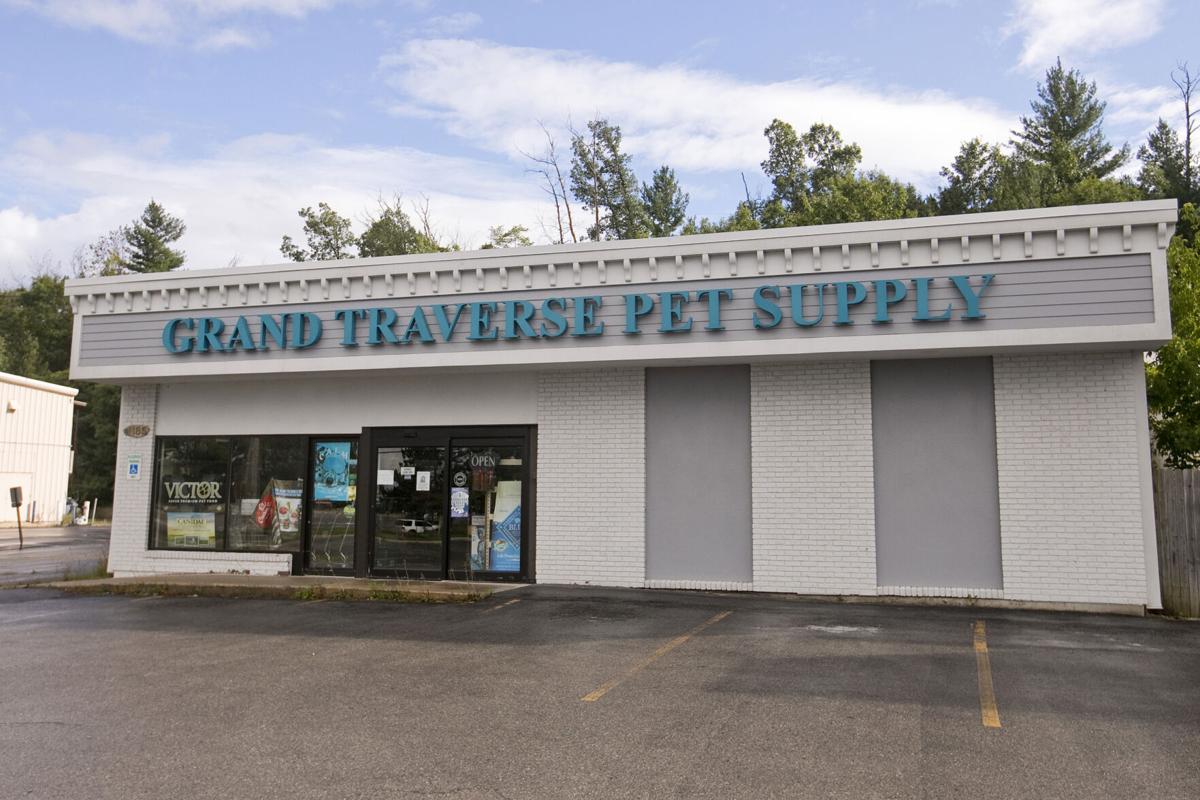 Grand Traverse Pet Supply on South Airport Road in Traverse has been closed because the owner has no employees. 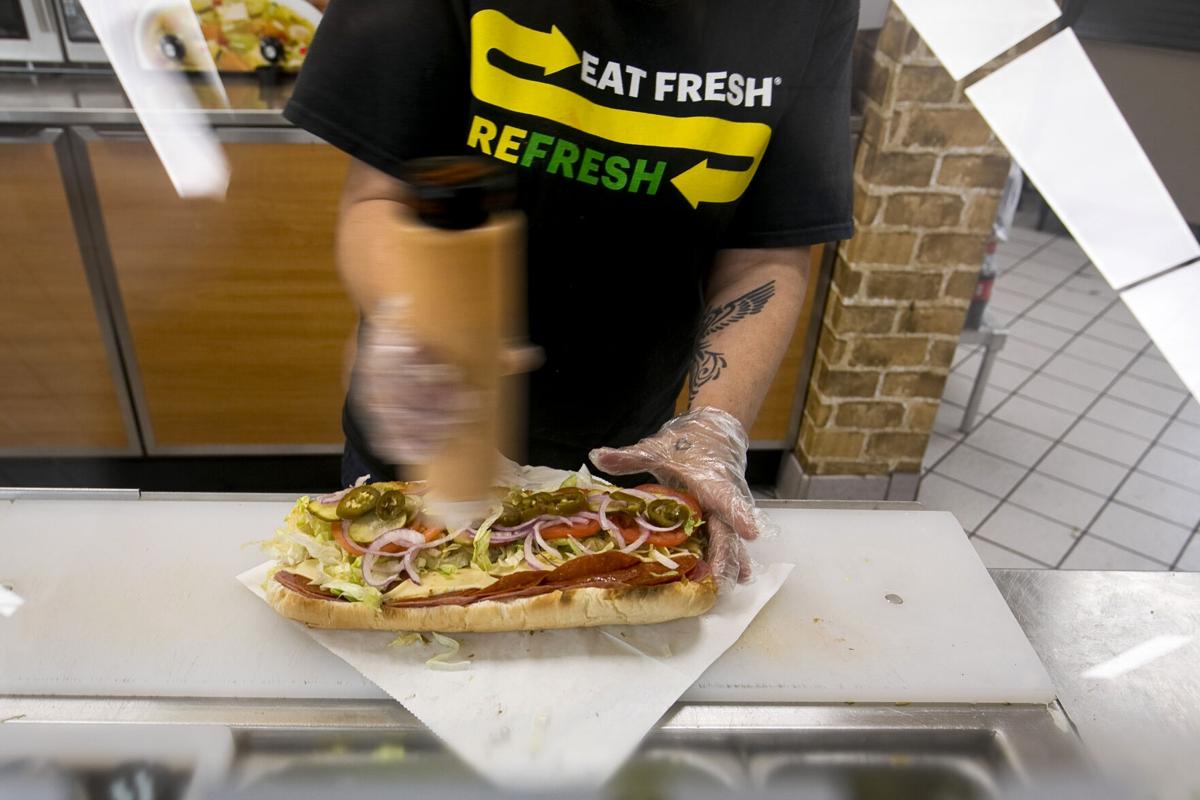 Beth Hentschel works alone at the Subway at the corner of Garfield and Hammond roads in Traverse City. Hentschel said that a lot of her customers have been understanding and supportive as she handles online, drive-through and in-store orders.

Beth Hentschel works alone at the Subway at the corner of Garfield and Hammond roads in Traverse City. Hentschel said that a lot of her customers have been understanding and supportive as she handles online, drive-thru and in-store orders.

A sign posted inside the Subway at the corner of Garfield and Hammond roads in Traverse City announces shortened hours of operation due to a staff shortage.

A sign posted on the door of Grand Traverse Pet Supply on South Airport Road in Traverse announces its temporary closure due to a lack of employees.

This sign at Mr. C’s Pub & Grill states the restaurant has closed because of a labor shortage.

Grand Traverse Pet Supply on South Airport Road in Traverse has been closed because the owner has no employees.

Beth Hentschel works alone at the Subway at the corner of Garfield and Hammond roads in Traverse City. Hentschel said that a lot of her customers have been understanding and supportive as she handles online, drive-through and in-store orders.

TRAVERSE CITY — Tables both inside and outside under unfurled patio umbrellas seemed ready for daily happy hour patrons.

But despite plenty of traffic on M-72 between Acme and Kalkaska, there was no Labor Day weekend in 2021 at Mr. C’s Pub and Grill.

The leaning real estate sign out front on the Friday before the long holiday weekend told part of the story. Two industrial dumpsters near the back of the restaurant, empty now except for some leftover rain water, add to the tale.

The sign on the front door says it all.

Right over ‘Happy Hour Daily,’ a note taped to the glass reads: “Due to the labor shortages, Mr. C’s had decided to ceased (sic) operations. We are so grateful for all the relationships we have made with so many of you. We will miss all of you! Take care.” A drawing of a heart took the place of the final period.

The 5.29-ace commercial site was put on the market two weeks ago, said Realtor Don Fedrigon, Jr., the listing agent and the broker/owner of Re/Max of Elk Rapids. List price is $1.195 million.

The telephone at Grand Traverse Pet Supply at 1185 W. South Airport Road answers with a voice message along the same theme as the sign at Mr. C’s.

“Hello, this is Grand Traverse Pet Supply,” the voice message from owner Chris Gopigian says. “We are temporarily closed due to lack of employees. We hope to reopen soon. Please check back with us. We thank you for being a customer.”

Grand Traverse Pet Supply officially went dark May 5, 2021. It wasn’t what Gopigian could have envisioned when he sat on milk crates in 1992, ordering fixtures and equipment for the Jan. 30, 1993 opening of Pet Supply Plus, which went independent nearly 20 years later.

“It didn’t close,” said Gopigian from his home in Bloomfield. “I just had no employees.”

Labor shortages across every industry in the region have left business owners scrambling to stay open during the early days of the pandemic in March 2020.

Some businesses responded to the lack of employees by reducing the number of days open during the week. Other companies drastically reduced daily hours of operation. Some did both.

Other business owners made the difficult to decision to lock the door — perhaps for good, but certainly for an indefinite period of time.

“It’s very difficult,” said Wendy Williams, who closed four of the nine Subway franchises she operates with “a very silent partner” in the area. “I put my heart, soul and money — everything — into this.

“It’s a sad story,” said Gopigian, who said he feels the worse for his loyal customers.

Grand Traverse Pet Supply had three employees before this year and went into the spring with two, Gopigian reported. Gopigian said he received an email one night looking for a “significant raise” for the store manager. He said it was more an ultimatum at nearly double the current rate.

“I never heard from them again,” the pet supply store owner said of the two workers.

Williams said the nine Subway franchises she operated had 74 employees before restaurants were limited to take-out only in March of 2020. She currently employs 33.

Williams closed the Suttons Bay Subway store at the end of 2019. In 2020, her Acme location and another at Three Mile and Hammond roads shut down. The Grand Traverse Mall location met the same fate in January of 2021.

She now operates four locations in Traverse City (Chum’s Corner, Walmart, West Bay and Garfield/Hammond) and one in Interlochen.

Of the 33 employees Williams has currently working, 25 are under the age of 18.

“I couldn’t find adults,” Williams said. “The workforce — the minors under age 18 — I could get plenty of those. But they can’t work alone. Subway you have to have one adult. You always need an adult with them and that’s what was lacking.”

Both Williams and Gopigian said state and national policies to help during the pandemic made it tough for business owners to continue at previous staff levels, if at all.

Gopigian said he was never against Michigan workers receiving federal Pandemic Unemployment Assistance, which began in March 2020 under President Donald Trump and ended Sept. 4, 2021. But he did object to the continued extensions of the program, in addition to the child care tax credit under the administration of President Joe Biden.

“It’s a very sad tale of a kind of policies of our government that enables these kind of situations to exist,” said Gopigian, who added he nearly hired a new employee in July, but felt unemployment benefits was a catalyst in the candidates’ decision to walk away. “It simply drives up the cost of labor across the board. This is close to being an epidemic in terms of proportion. There’s definitely a labor shortage, and policy created that shortage.”

“I think a lot of it is they are definitely making more money sitting at home,” Williams said. “A lot of them have been out of work for so long, they only want to work three or four days a week. Plus once you lose people, it’s easier for them to go find another job.”

Gopigian said he could have applied for a Paycheck Protection Program loan, but decided not to because he was able to stay open as an essential business and felt other small companies were in greater need.

Gopigian said it was heartbreaking to see a lot of larger companies receive substantial amounts of funding in the early days of the PPP, especially when it wasn’t needed. A July 2020 CNBC article reported companies returned or canceled more than $30 billion in loans approved program.

“It’s affecting a considerable number of businesses in a huge way,” he said. “These small companies aren’t coming back.”

The typical employee and public response to staffing problems is to pay workers more. Williams said the oft-quoted ‘living wage’ depends on an individual’s lifestyle and is difficult to pin down.

“Wages have increased because of this situation and companies have had to pay people more,” he said. “I was paying my people well and would have considered paying people more, but not massively more.

“I can’t stay in business that way. There has to be a fine line, a place where everyone can co-exist and be happy.”

Even after closing the four locations, Williams said Subway has responded to the labor shortage by reducing hours and getting by with solo adult employees. Williams said the five locations didn’t go to extended summer hours (8 a.m. to 9 p.m.) in 2021. Keeping hours at 10 a.m. to 7 p.m. means Williams can, in some instances, staff with one shift instead of two.

Still, extra is needed to keep her five remaining Subway locations in operation.

“I’m working 85 hours a week; I have been doing that since April or May,” Williams said. “I didn’t want to burn out the associates. I don’t want them getting burned out, so I’ve been picking up the slack.”

Charles Egeler, who has operated Chef Charles’ for 27 years at 147 River St. in Elk Rapids, said he operated the restaurant this summer with himself and six employees. Egeler said the six were high school and college-age employees. Because they had to return to school, he couldn’t remain open until his usual November closing date for the winter.

In 2021, Chef Charles’ was open five days instead of seven and operated for 40 hours a week instead of 70. Egeler said on Aug. 13 he was open only for lunch, and the three days prior only from from 10 a.m. to noon.

“I had to close at the end of the second full week of August,” said Egeler, who said he came in at 6 a.m. to do daily prep and was the only one at the restaurant for hours. “On the 19th, I catered my last party at White Birch Lodge.”

Living 240 miles away doesn’t allow Gopigian the option to work on-site at Grand Traverse Pet Supply, which means he’ll have to make some difficult decisions soon.

“Right now I’m really planning to not reopen,” Gopogian said, before hedging. “I don’t have any alternative. I have a store full of merchandise.

“I could go either way.”

Wendy Williams, who in recent months has closed four of the nine local Subway franchises she operated

Two years ago, employers could select new employees from a vast ocean of talent. Many businesses today find themselves fishing for applicants …