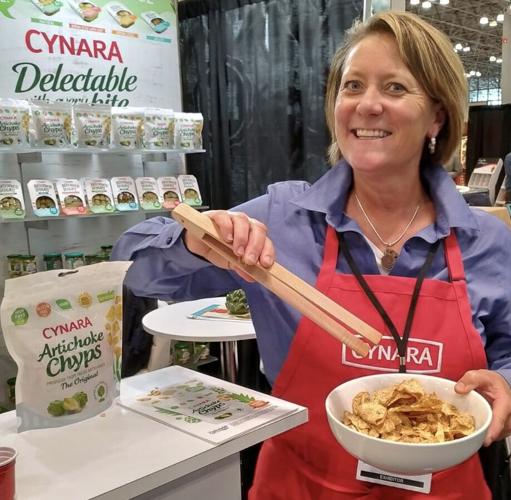 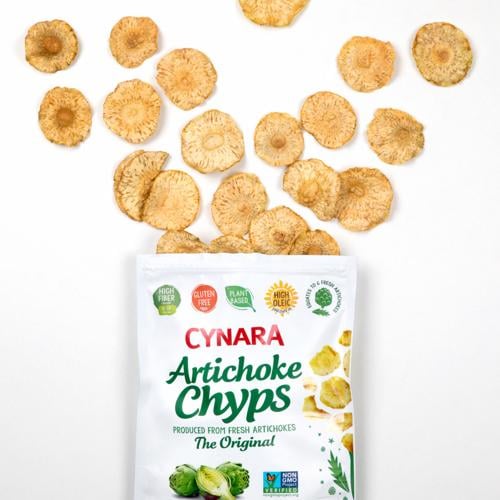 Cynara's latest product is a 1.76-ounce bag of Artichoke Chyps.

Cynara's latest product is a 1.76-ounce bag of Artichoke Chyps.

TRAVERSE CITY — If you ever wanted to eat the equivalent of six fresh artichokes out of a bag as a snack, the wait is over.

Traverse City’s Melissa Elms is all about artichokes in her role as national sales director of Cynara, USA. The company’s world headquarters are in Murica in the southeastern corner of Spain.

The latest product from Cynara are Artichoke Chyps, which are flying off virtual store shelves since their introduction in January of this year.

The 1.76-ounce bags of Artichoke Chyps sell in four- and eight-packs on Amazon. Elms said the “first artichoke snack in the world” also was available through Thrive Market, an e-commerce retailer specializing in natural and organic food products.

“We sold out in five days from both of (Thrive’s) fulfillment centers,” said Elms, who has lived in Traverse City’s Old Town for nearly three years.

Artichoke Chyps first launched in test markets in June 2020 and in September through United Supermarkets in Texas. In January Cynara turned its focus to e-commerce and markets outside of Texas.

Elms is pushing to get the product into other distribution channels, including meeting with some local and state grocers. She said it’s been a slow process as the focus during the COVID-19 pandemic was on existing products.

“With food service opening back up and grocery stores being more accepting of new items, now we’re starting to see a lot more of the category managers accepting of samples and meeting of reviews,” Elms said.

Cynara grows its artichokes on farms in Spain and Peru, allowing for a continuous supply of Cynara scolymus. Cynara is derived from a Greek word for ‘thistle plant.’

Elms said the only major growing region for artichokes in the United States is in Castorville, California. The ‘Artichoke Center of the World’ hosts an annual festival.

Compared to potato chips or other salty snacks, Chyps are more expensive because it costs more to grow and harvest artichokes. Elms said a bag retails for between $5.99 and $7.99.

“The price threshold has not held back consumer demand for it,” she quickly pointed out.

Even though Elms is biased when it comes to artichoke snacks, she said samplers will often down a whole bag without noticing. Elms said Artichoke Chyps also meet a lot of dietary and lifestyle demands because they are gluten-free, non-GMO certified, vegan, plant-based and are low in calories and carbs.

“They’re delicious and completely addicting,” she said. “It meets all the requirements of eating a real healthy snack.”

The snacks aren’t the only product from Cynara.

Elms said the company has a half-dozen different types of jar artichokes for sale at 50 Meijer locations. Fresh-packed hearts called Artichoke Delights, in an “innovative tray” that can be refrigerated or stored at room temperature, should be coming to the U.S. in the next 6 to 8 weeks.

While admitting the sales of Artichoke Chyps started from virtually nothing, the sales numbers have been impressive, Elms said.

“It’s kind of like holding on to a tiger’s tail, just keeping up with what’s happening.”

Elms does have experience with a meteoric rise of a food product. She was the original founder and CEO of RAES Food, Inc. Under the brand name Bee Free Honee, Elms and former business partner Katie Sanchez pitched Bee Free Honee on season seven of “Shark Tank,” which aired Feb. 12, 2016.

Elms said landing an investment with Mark Cuban, Barbara Corcoran and guest Shark Chris Sacca for $210,000 was like “launching into the stratosphere and moving Mach 7” afterwards. Elms was with Bee Free Honee from May 2013 until she left the company in November 2018. The end of her tenure was spent working out of 20Fathoms, when it was in downtown Traverse City.

Now Elms is with Cynara and hopes to be on another rise to natural food promine- nce that’s all about artichokes. More information about the company is available at www.cynara.net.

TRAVERSE CITY — Even though it felt a little like earning a degree after six years of college, Birch Infrastructure hatched its way out of Tra…