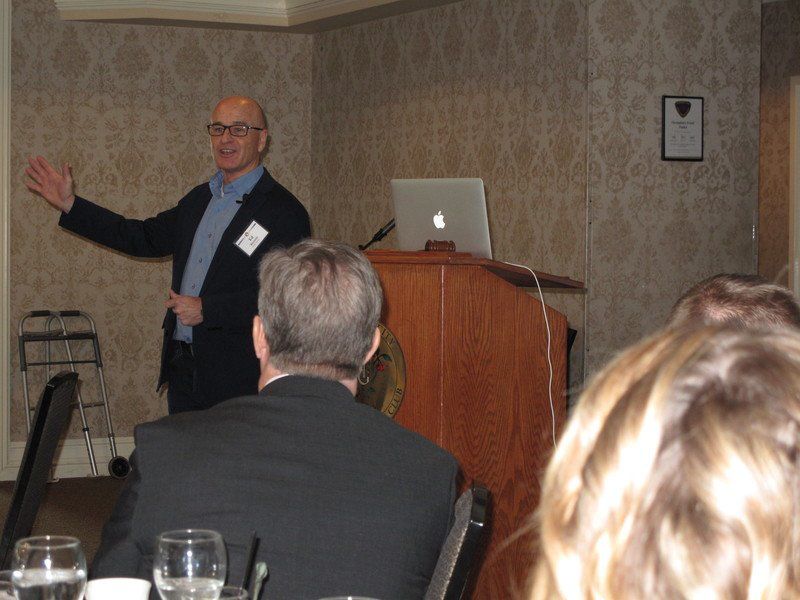 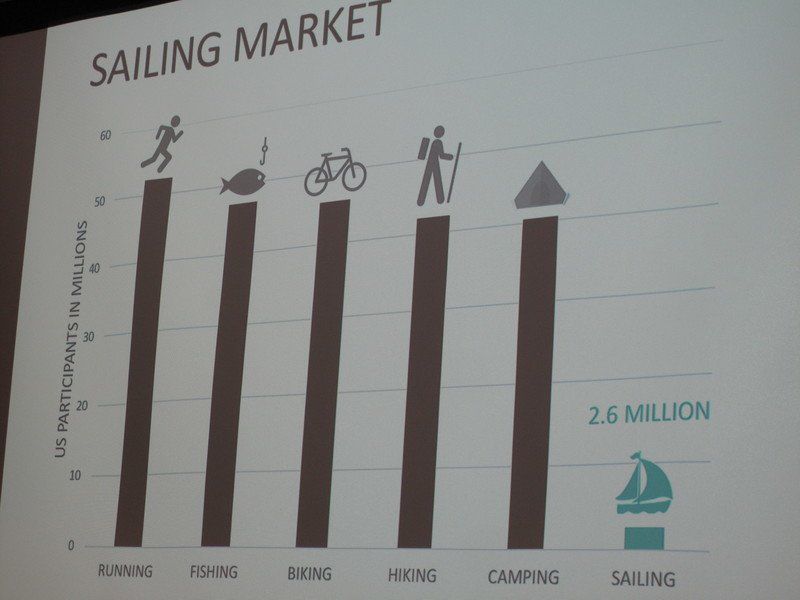 A graphic shows the number of people in the United States that participate in running, fishing, biking, hiking and camping and how it compares to sailing. The chart was part of Quantum Sails Chief Executive Officer Ed Reynolds' speech at Friday's meeting of the Economic Club of Traverse City.

A graphic shows the number of people in the United States that participate in running, fishing, biking, hiking and camping and how it compares to sailing. The chart was part of Quantum Sails Chief Executive Officer Ed Reynolds' speech at Friday's meeting of the Economic Club of Traverse City.

TRAVERSE CITY — Despite never having sailed, Ed Reynolds was able to break into the industry at age 22.

Despite the instance of a business colleague that "there is no sailmaking industry," Reynolds was able as chief executive officer to guide Quantum Sails as a major player in the global industry from its Traverse City headquarters.

"I am kind of the American dream," Carpenter told Friday's meeting of the Economic Club of Traverse City, kicking off its 2018 season. "I pinch myself daily what I get to do and spent the last 40 years of my life doing."

Reynolds got into the sailing industry when he walked into a sail loft on Cherry Bend Road looking for a job. Despite some initial rough waters, Reynolds eventually got a job at the local loft and eventually became owner.

Reynolds Sail was one of several lofts that merged to become the Quantum Sails group in 1996. Then all Quantum had to do was prove it could hold its own with North Sails, which tops the industry and today is responsible for a third of its $300 million in retail sales.

Reynolds said they needed a good product, good technology, great service and a fair value to carve out a spot in the industry.

"We had as good of a product and we had the technology, but we couldn't prove it," Reynolds recalled. "We needed to go to the top level of sailing."

With the financial backing of Doug DeVos and Fred Howe — coupled with the expertise of world-renowned sailor and long-time friend Terry Hutchinson — Quantum put a top-notch team together for the MedCup Circuit in 2008. Quantum was the only one of 19 boats not to have a North Sails sail. It won the overall championship.

Fast-forward to now and Quantum Sails is the second largest sailmaker in the world with $45 million in sales out of the $300 million worldwide. Some 800 to 1,000 small sailmakers compete for the remaining $155 million in sales.

Reynolds said Quantum posted double-digit growth from 2007-2015. During that period, the number of U.S. boat builders has decreased by 34 percent and domestic sailboat production has dropped 54 percent.

He added there are 2.6 million sailboats in the world, half in the United States. Reynolds showed a chart during Friday's presentation that showed 2.6 million people in the country participated in sailing while those that participate in running, fishing, biking, hiking and camping all top 40 million.

In a market study, one company said profile of the sailor is the demographic that doesn't exist: The high-end sporting enthusiast with higher-than-average education with the highest average net worth and income. Reynolds said the market study labeled sailing's demographic "the unicorn."

Reynolds said Quantum Sails will continue to keep its spot in the global market because it offers good customer service and its ability to produce 8,500 custom products a year, each within four weeks of the order.

"The job they do and how they do it is unbelievable," Reynolds said of his team of employees, which includes 20-25 at the Traverse City headquarters.

While the racing portion of the company receives a lot of attention, Reynolds said Quantum Sails aims to be "the No. 1 service provider and the No. 1 provider of solutions" to anyone at any level who answers the challenge of sailing.

The closing words on a video on Friday simply read, "Quantum Sails: To the Next Challenge."