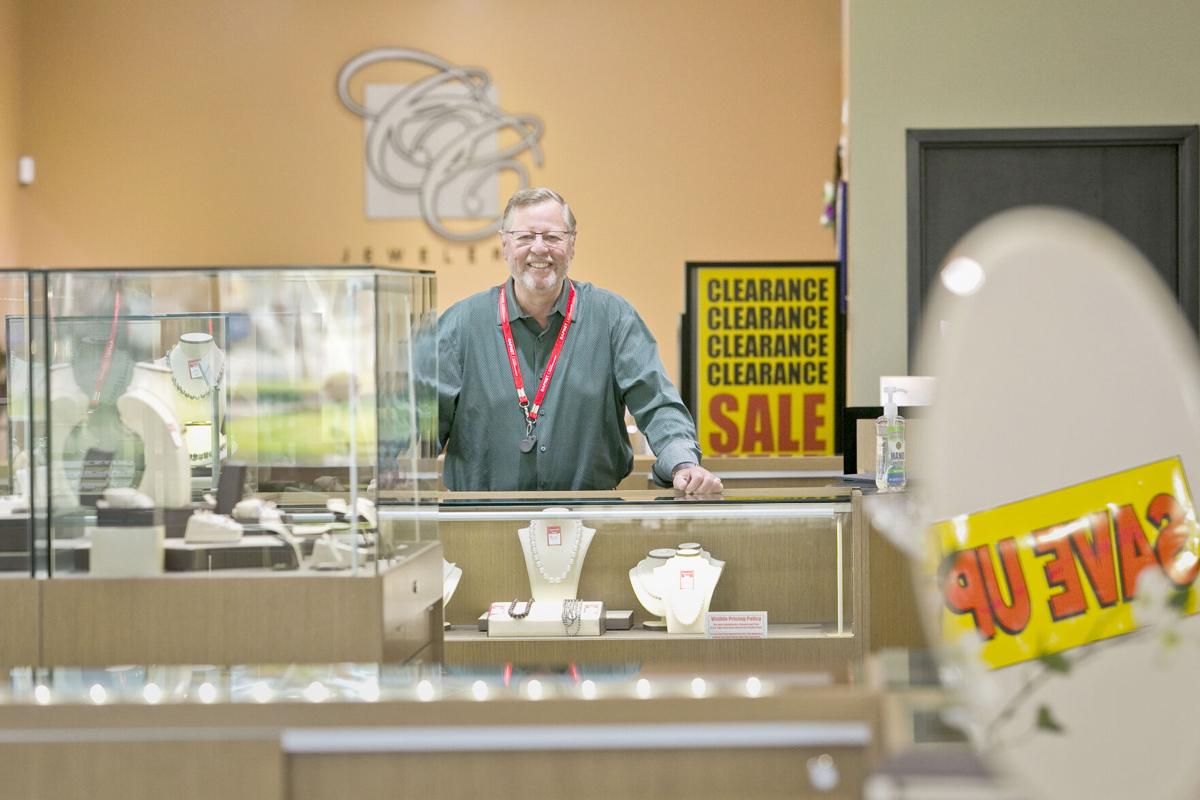 CC Jewelers owner Dave Croad is retiring, and is selling the business to his future daughter-in-law Nicolina Gardner. 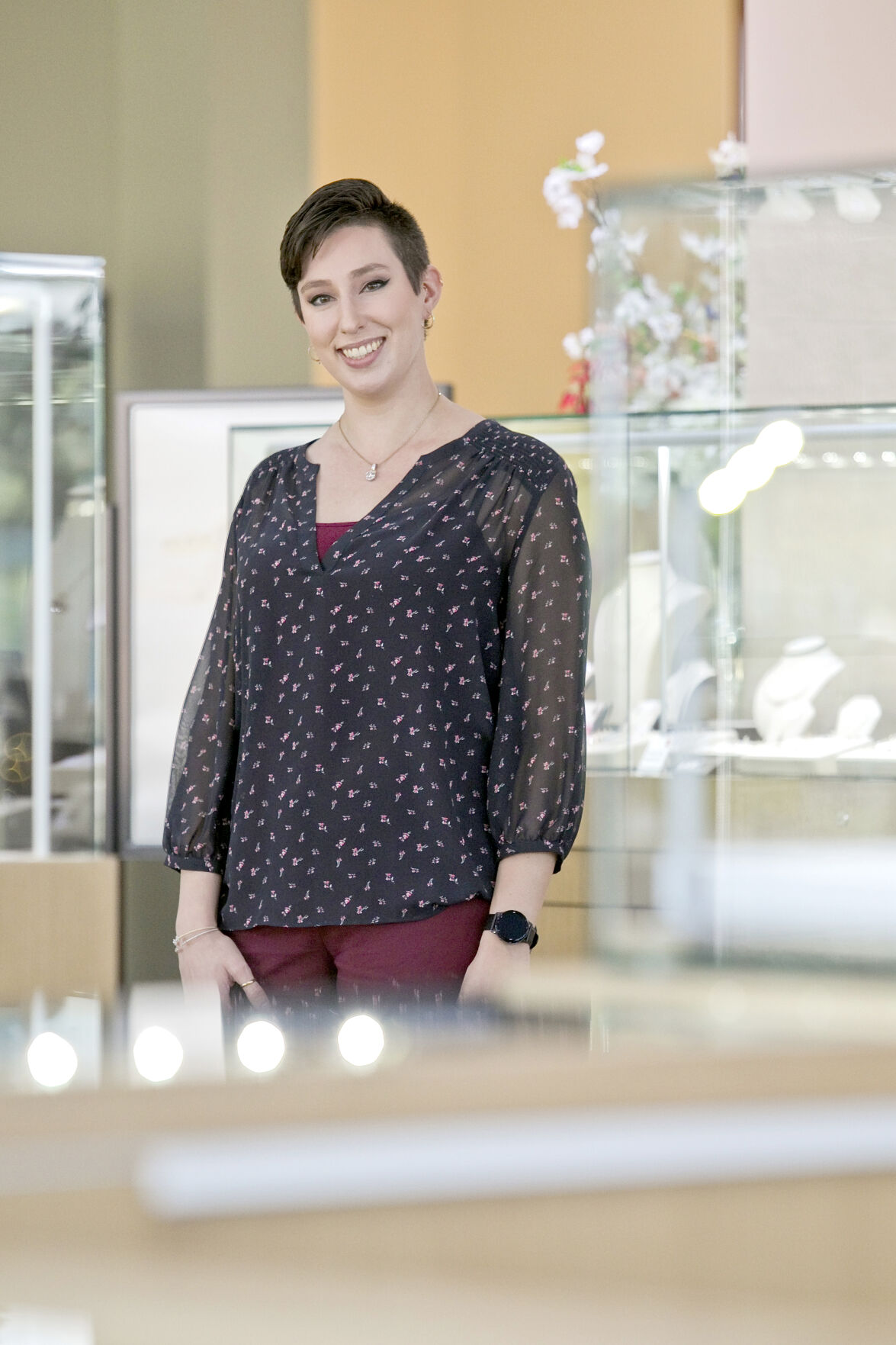 Nicolina Gardner is taking over CC Jewelers from its current owner, and her future father-in-law, Dave Croad, who is retiring. 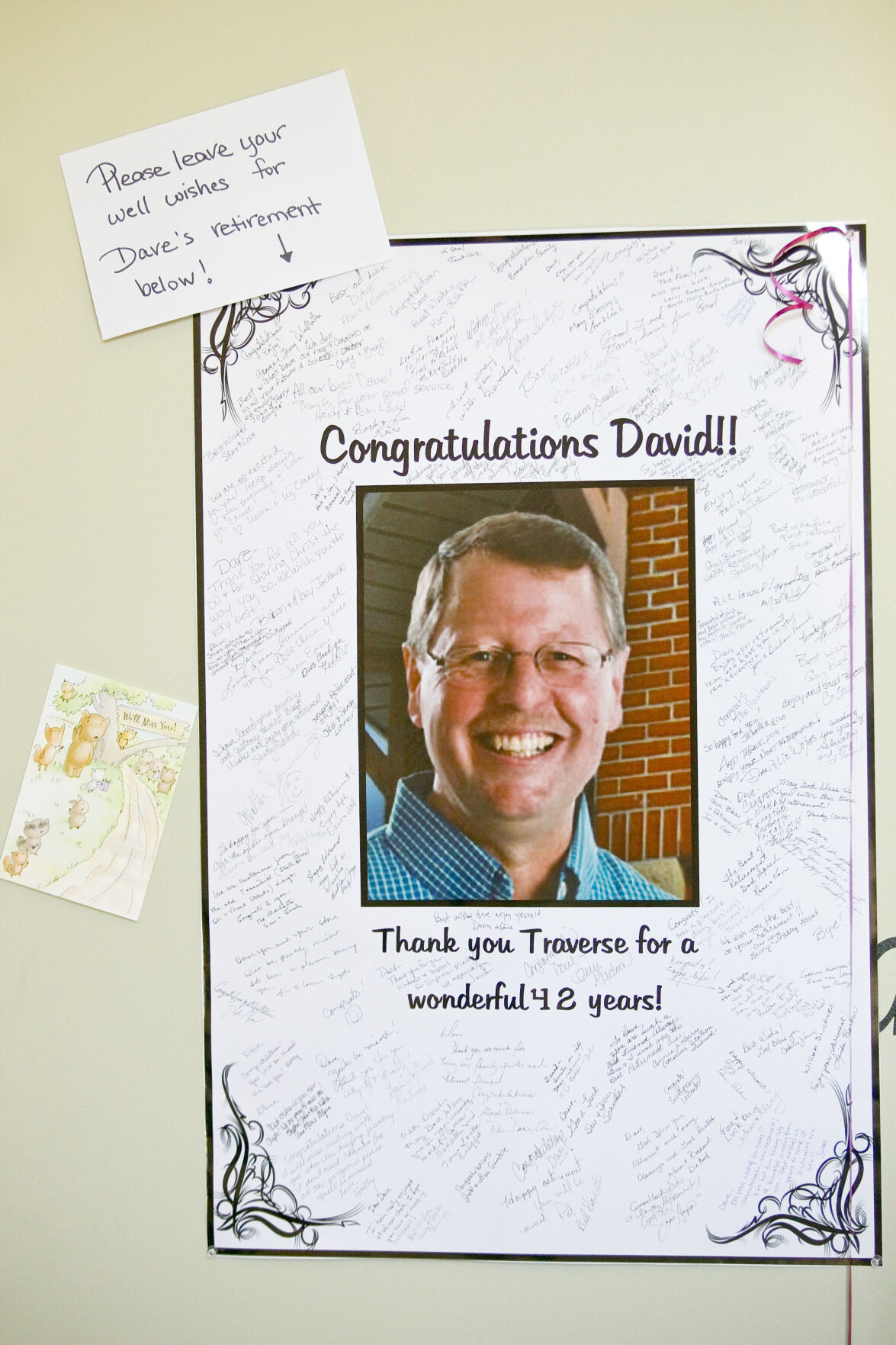 A sign near the entrance to CC Jewelers is covered in well-wishes for owner Dave Croad, who is retiring. 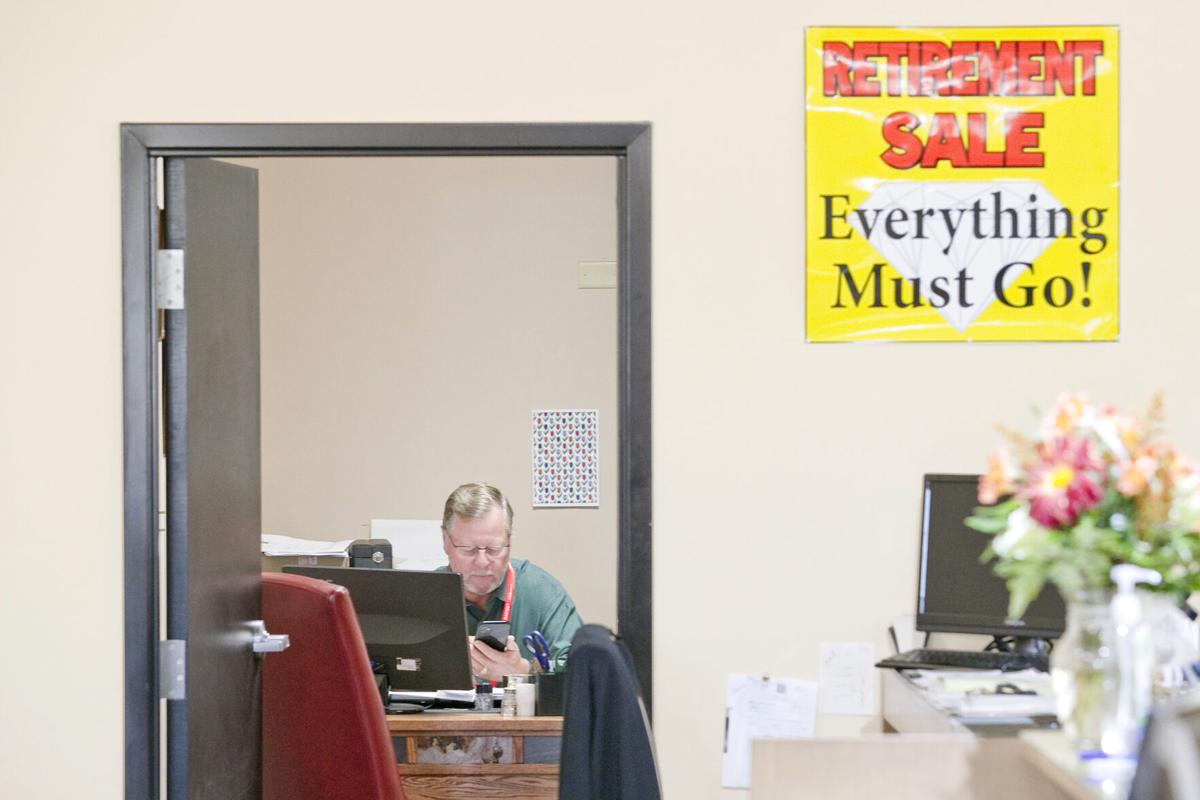 CC Jewelers owner Dave Croad works in his office near a sign announcing a retirement sale. Croad is retiring, and is selling the business to his future daughter-in-law Nicolina Gardner.

CC Jewelers owner Dave Croad is retiring, and is selling the business to his future daughter-in-law Nicolina Gardner.

Nicolina Gardner is taking over CC Jewelers from its current owner, and her future father-in-law, Dave Croad, who is retiring.

A sign near the entrance to CC Jewelers is covered in well-wishes for owner Dave Croad, who is retiring.

CC Jewelers owner Dave Croad works in his office near a sign announcing a retirement sale. Croad is retiring, and is selling the business to his future daughter-in-law Nicolina Gardner.

TRAVERSE CITY — With more than 40 years in the jewelry business, Dave Croad has been a part of thousands of wedding engagements, if not 10 times that many.

While not always a surprise, often the first time the bride-to-be gets a glimpse of the ring is when the fiancé pops the question. Most times keeping the wonder in the wonderful moment isn’t too difficult.

But one proposal was a little different.

The first wrinkle in the ironclad plan for surprise was that the longtime owner of CC Jewelers was selling the diamond engagement ring to his son, Michael. The second difficulty was Michael Croad was planning to propose to one of his sales associates, Nicolina Gardner, who had jokingly texted a picture of the diamond that caught her eye when it arrived at the store.

Michael Croad quickly texted his father to put the ring aside. The entire store at 1045 S. Garfield Ave. was in on the plan — except for Gardner, who was shocked to see the ring she adored when Michael Croad asked her to marry him several months later on the top of Crystal Mountain.

“We were sneaking around Nicki’s back,” Dave Croad said proudly.

“Everyone in the store knew about it,” Gardner said. “I didn’t have a clue.”

Sometime this fall, the CC Jewelers store will belong to Gardner. She is purchasing the business Croad has operated in different forms since he bought Coins & Collectibles in 1993. Croad added jewelry sales in 2005 and became CC Jewelers.

Croad turned 65 in July and figured it was time to end his jewelry career, which began when he took a job at Fox Jewelers in Traverse City in 1979.

“It’s time,” said Croad, who looks forward to becoming a snowbird and spending more time with his family, which includes five grandchildren with another coming in October. “It’s been a great ride. I absolutely loved it.”

The exact time of the ownership transfer is not set. Croad said CC Jewelers is in the midst of a storewide sale. Croad said it’s so he can fund his retirement.

“We don’t really know for sure yet,” he said. “It’ll be going on for at least another three or four weeks.”

But the transfer will definitely come before the nuptials, scheduled for May 21, 2022.

“She’ll have purchased the store first,” Croad said with a smile.

The thing that makes him most happy is that CC Jewelers is going to continue on its path, even though the transfer is months away from being ‘official.’

“It’s going to stay in the family and stay as CC Jewelers,” said Croad, who moved the business from the Cherryland Center in December 2012.

“We’re not planning to go anywhere,” Gardner said of the building her future father-in-law purchased from Lauren Hanna Interiors. “We’re still at the corner of Carver and South Garfield and look forward to serving the area for many more years.

“Everyone has been very pleased to know we’re staying open.”

Gardner said any differences at CC Jewelers after the sale will be minor. She did say the store is looking to hire more staff, partly to replace Croad.

“We have the widest selection of bridal jewelry and that’s not going to change,” Gardner said. “There will be some subtle changes. We don’t want to shock our clients, but we’ll continue to grow.”

Gardner said one of its top brands, Gabriel and Co., will remain in the store. She also plans to expand the brand into more fashion and men’s lines. And she plans to expand offerings from designers like Kattan Jewelry and Diamond Emotions.

“I’m very excited and looking forward to the future,” Gardner said. “Not just what’s around the bend, but what Dave has established already.

“We’re going to continue to carry some of the same brands. But we intend to bring on a couple of new lines of fashion jewelry and also add another men’s line.”

Neither Croad nor Gardner had designs on jewelry as a career.

Croad, who graduated from Central Michigan University with a teaching certificate, turned down a science instruction and coaching job in the Kalamazoo area to head north. He came to Traverse City after the school year started in September, took the job with Fox Jewelers the first part of October and never went back to the classroom.

Gardner, who is approaching eight years in the jewelry business and has been with CC for 3½, has an associate’s degree in design from Baker College.

“Neither of us intended to be in jewelry,” Gardner said. “We both just kind of fell into it. We both found it to be a passion. That eye for detail and design probably helps in jewelry.”

Croad, whose job with Fox Jewelers took him to Wisconsin as a district supervisor, said the business has changed in many ways over the years. All the different advertising avenues was one change he cited. The other has to do with the internet.

“As far as the actual business, with internet sales jewelry has become a commodity instead of as a symbol of love,” Croad said. “You order a piece of jewelry off the internet, there’s no real emotion going into what you’re choosing.”

Croad said the engagement shopping customer has also changed. He said it used to be “75 percent of sales were guys that would come in blind having no idea what she wanted.”

Then it morphed into future brides selecting three or four engagement rings they liked for the groom in waiting to select from. Then it was mothers and friends coming in with the future bride.

“Now we’re seeing more and more couples,” said Croad, who said he decided it was time to retire when he realized he was selling engagement rings to the children of couples he had outfitted decades earlier.

Gardner said those are the kind of customers that made and sustained the store.

“CC Jewelers has been what it is because of community support,” Gardner said. “They remember the service and quality that we bring to the area, not to mention the selection.”

Croad returned to the area in 1992 when he purchased the three-unit Pleasure Time Resort on Spider Lake. A year later he bought Coins & Collectibles, eventually shortening the name with a possible eye on one of his children taking over the business.

“It was CC — Coins & Collectibles,” Croad said. “Then we threw out the ampersand and it became CC Jewelers.”

CC Jewelers did become a family business in another way. His daughter, Sarah Cutler, and her husband, Jeff, in 2017 opened CC Jewelers Manistee at 395 River St.

Soon the Traverse City store also will be in the family, and the generational engagement tales can continue, even if one of those tales belongs to the owner-to-be.

“Bridal is the most fun thing to do,” Gardner said. “Every couple is unique. They all have a story: how they met, how he planned to propose.”