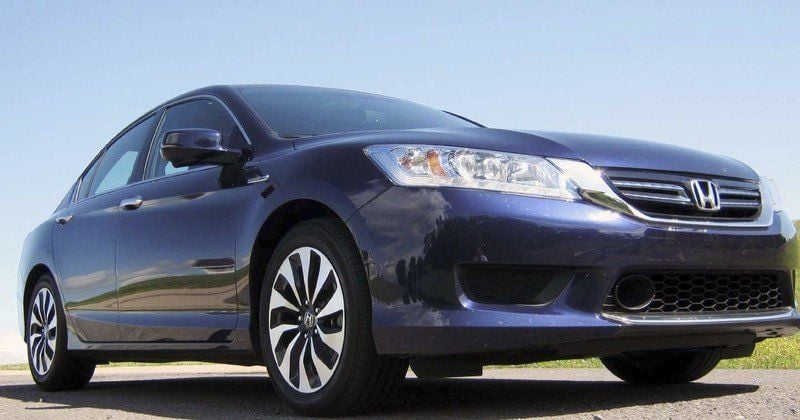 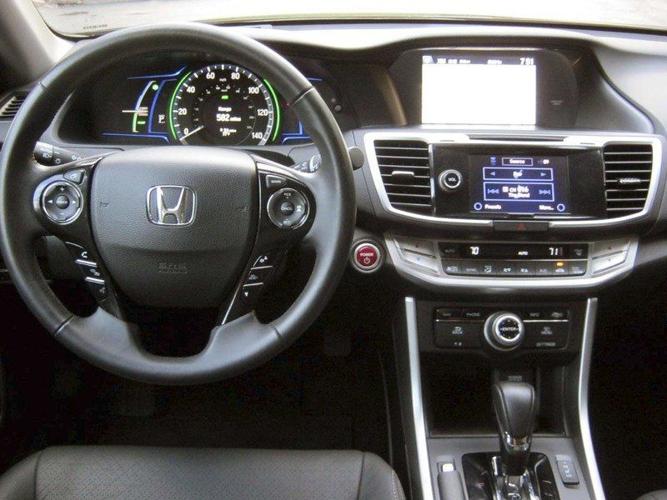 Interior design of the new Accord Hybrid offers a refined look with intuitively placed gauges and buttons. Photo by Len Ingrassia.

Interior design of the new Accord Hybrid offers a refined look with intuitively placed gauges and buttons. Photo by Len Ingrassia.

TRAVERSE CITY — Honda has a great reputation for producing quality cars and sport utility vehicles over the years, causing havoc with domestic car lines while giving consumers a solid value. Compared with Toyota, Honda markets itself with a lot less fanfare.

While overall sales are credible, the new Honda Accord Hybrid has all the makings of being a superstar with fuel efficiency that equals Prius while delivering generous room in a near elegant interior. That should worry Toyota and give Honda something to chatter about.

The all-new 2014 model incorporates new hybrid technology that combines a 2.0-liter four-cylinder gasoline engine with two electric motors sending nearly 200 horsepower to its front wheels. The power pack makes the Accord quick off the line and the seamless electric transmission provides a smooth ride albeit with some groan sounds under acceleration.

EPA estimates fuel economy on average at 47 miles per gallon with 50 city and 45 highway, all impressive numbers for a mid-sized sedan.

The Touring model test car recorded 53 mpg in combined driving with hilly terrain and interstate travel, remarkable results compared with other sedans in its class. The only competitor with similar fuel economy is the Ford Fusion hybrid. Toyota Camry and Kia Optima hybrids are in the same class but neither delivers the fuel economy of the Accord.

For a mid $30s price, the top-of-line Touring model includes high end technology and safety features available only as options in more expensive European sedans. One of my favorite safety options, adaptive cruise control, is included. It uses laser beams to measure forward objects and brakes or accelerates the car automatically to maintain a pre-set distance.

Another nifty feature is a passenger mirror mounted camera proving right side rearview when the right turn signal is activated or a stalk mounted button is depressed. The view is projected on the center mounted display screen, same as a rear mounted camera useful while parallel parking or in reverse gear.

In addition to the aforementioned engine growl at times, the only other deficiency is limited trunk space due to space-grabbing lithium battery packs reducing storage space to just under 10 cubic feet.

With its attractive fuel economy and pricing, the Accord hybrid deserves a test drive along with comparable models.

Len Ingrassia is an automotive writer. Contact him at lenscarcorner@ptd.net.