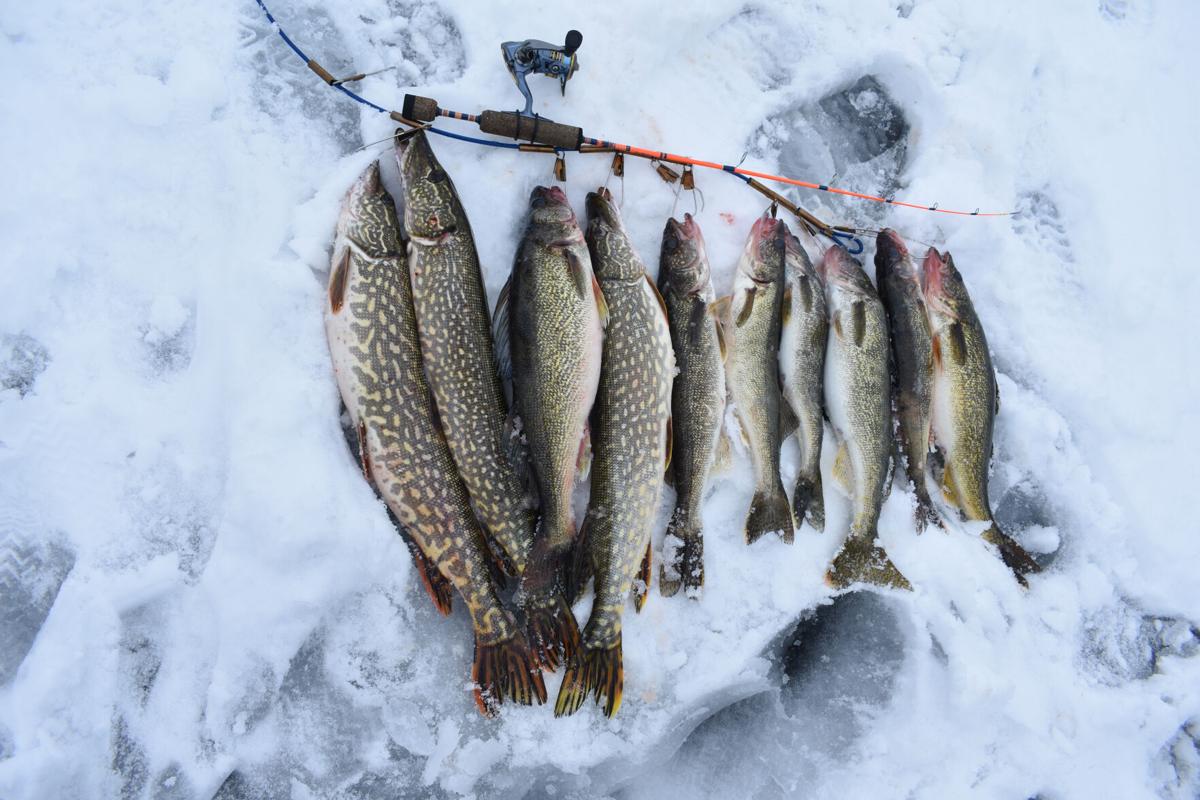 Pike and walleye are both popular targets on Houghton Lake. 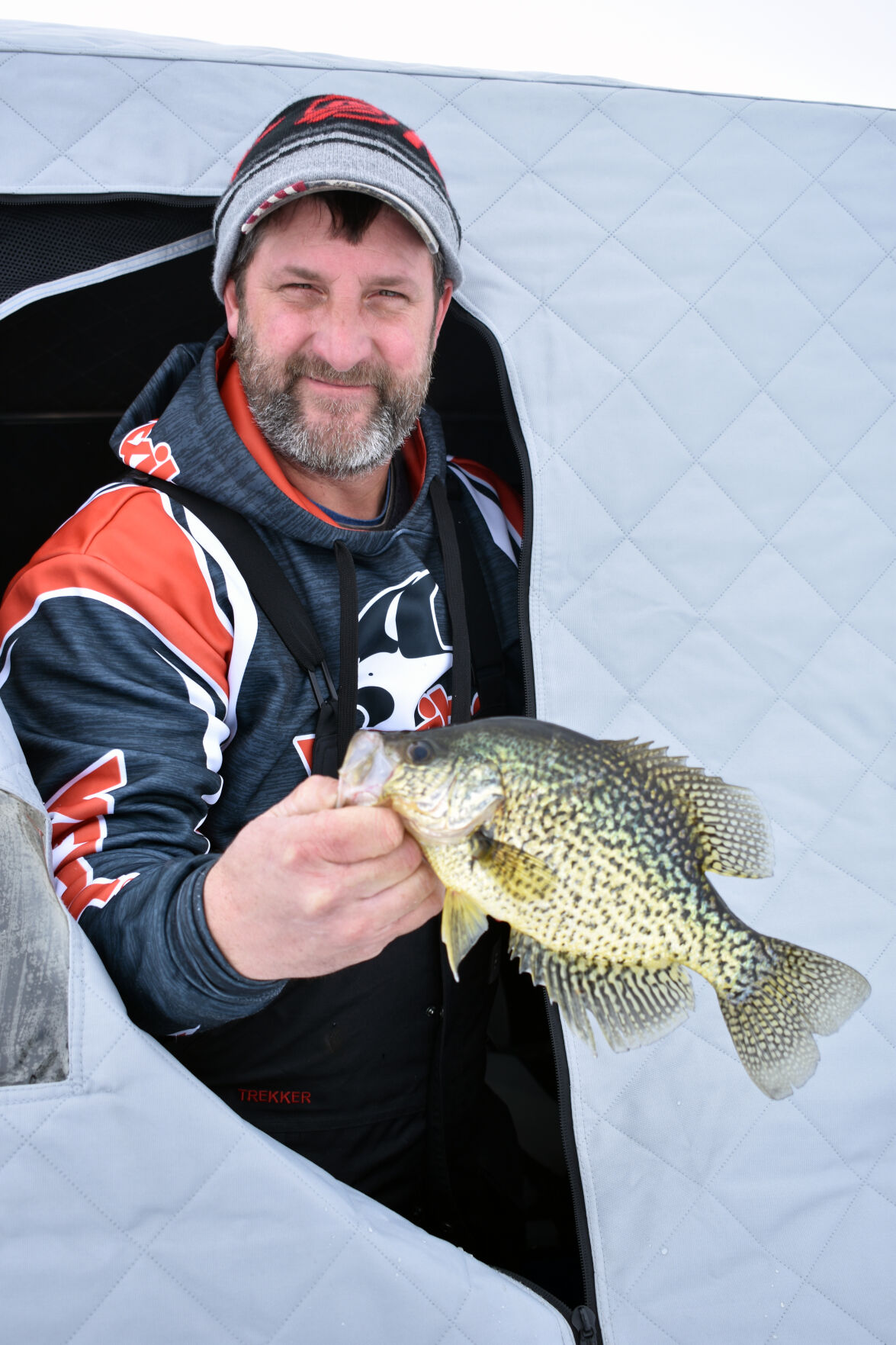 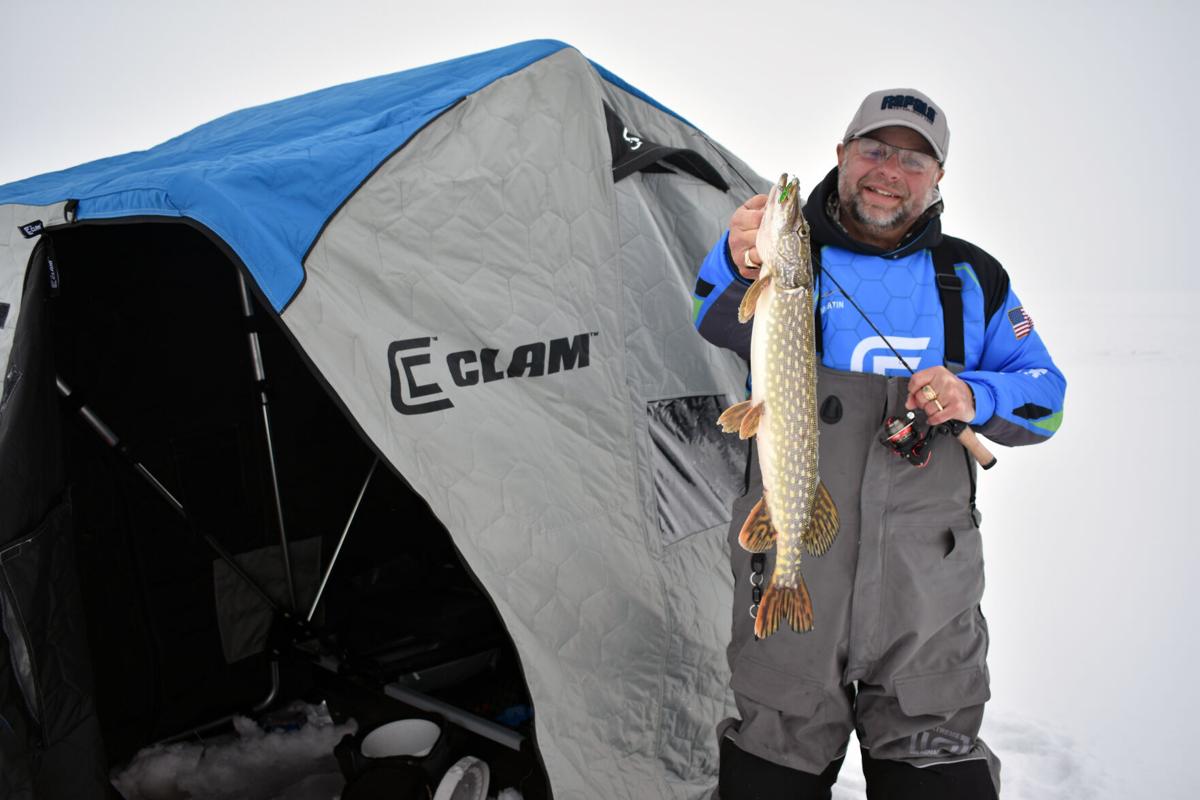 Pike and walleye are both popular targets on Houghton Lake.

HOUGHTON LAKE — I’d been fishing a small Jigging Rapala tipped with a minnow head near bottom in 15 feet of water for 90 minutes or so when I noticed a fish appear on the depth finder a couple feet above me.

I immediately began jigging it up in the water column and after I’d passed the mark by a foot or so, I felt the hit. I swung and missed.

So I dropped the bait to the bottom, pounded it a couple of times, and began jigging it up again. This time when the fish hit, I connected. Turned out it was a decent (say, 24 inches) pike.

It was the second day of Mark Martin’s Ice Fishing/Vacation School on Michigan’s largest inland lake. I’d spent the previous day in a shanty with Chad Schut, one of Martin’s pro staffers with nothing to show for it. I did everything I knew, changed baits regularly — I even fished a tiny teardrop tipped with spikes on one-pound test line for a couple of hours. Nothing. Between the two of us we managed one crappie (a nice one) that hit on a tip-up.

I was not alone; most of the anglers had a tough day.

Two days earlier, while the pro staffers pre-fished the lake, the fishing was pretty good. Brandon Stanton, another pro staffer, caught nine walleyes that day, but they were all undersized. Pat Bentley, who was fishing with his son Hunter and three other guys put 10 fish — three pike and seven walleyes — on a stringer.

But a cold front pushed through and the bite cratered, though not for everyone. Pro staffer Jeff Kissel caught five (four pike and a walleye) after catching just two total in the three previous days. And pro staffer Chris Reinhold, who’d struggled all day, found he had a large pike — almost 40 inches — on a tip-up as he was pulling it at the end of the day. The pike had taken the minnow and stripped off almost all the line, but the flag had frozen to the lake’s surface and never popped. He had no idea how long that fish had been on.

That’s fishing, of course, and though the fishing had picked up on the second day of the school, it was well below expectations for Houghton Lake.

“This is the toughest it’s ever been,” Martin said. “You know it had to happen sometime.”

Houghton Lake, at just more than 20,000 acres with an average depth of about eight feet and a maximum depth of about 20, is a fish factory. It’s all good habitat for warm-water species and Houghton Lake generally offers good fishing for all of them.

“If you look at Master Angler records you’ll see there are a lot of them from Houghton Lake,” said Mark Tonello, the Department of Natural Resources fisheries biologist who oversees the lake. “There are nice crappie in there, nice perch, nice bluegills and bass — it hosts a lot of bass tournaments — and of lot walleyes. It’s one of, if not the most popular fishing lakes in the state in terms of angler hours; in the past Houghton Lake supported more angler effort than the Michigan waters of Lake Superior.

“But it can be daunting to even know where to start because it’s just so huge and most of it is fishable.”

Historically, Houghton Lake has been one of the better pike lakes in Michigan, but while pike numbers remain high, catching what have been traditional keepers (i.e. 24 inches or longer) in recent years has been a chore. So the DNR changed the regulations, eliminating the minimum size limit and raising the creel limit. Anglers can keep five pike daily, but only one maybe 24 inches or longer.

“There’s a lot of them in there; we get a lot of reports of undersized pike,” Tonello said. “When you enact that regulation, one thought would be if anglers potentially thin the pike out enough, it would allow the remainder to grow better. With less competition for food, they should get bigger.

“I don’t know if that’s realistic or not. If people want to keep those fish and there’s no good biological reason for them not to, why not give them the opportunity to do that? There’s no evidence that’s happening.”

But walleyes are the go-to species for many anglers these days and Houghton Lake has a fair population of them. The DNR stocked walleye for many years until several comprehensive studies indicated there were as many ‘eyes being produced in years when they weren’t stocked as during those when they were.

“It’s been a long time since we did any real comprehensive survey on Houghton Lake, but we want to continue monitoring that walleye population to make sure those fish continue to reproduce because that’s a big draw in that lake and a good walleye population plays a role in keeping the bluegill population in good shape.”

Personally, I’ve had enough good walleye fishing there over the years to keep trying. During open-water season, I’ve generally scored a nice enough by-catch — bluegills and pumpkinseeds, crappie, pike, and bass (both varieties) — to make for some memorable excursions. And the amenities — there are lots of resorts and motels and a couple of places that rent shanties — make it easy on you.

So I’d recommend Houghton Lake; just don’t go in the teeth of a cold front.