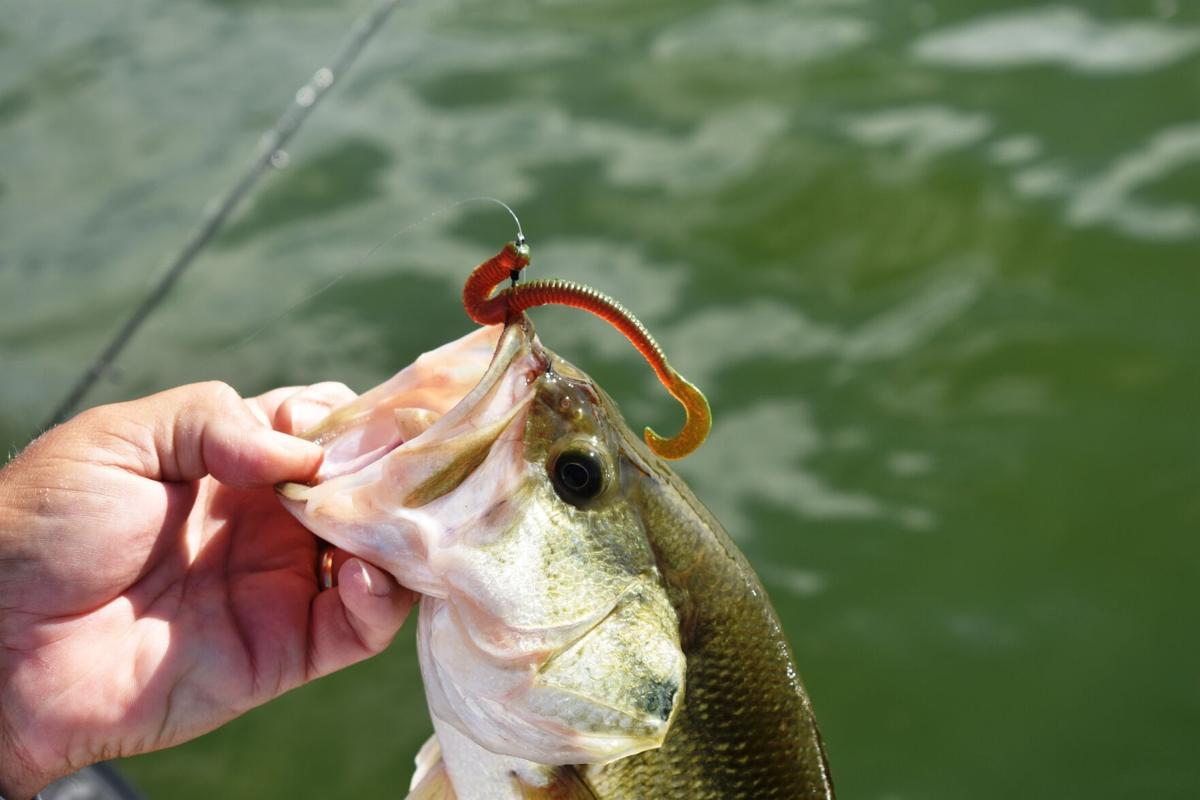 A plastic worm rigged Texas-style on a drop shot rig fooled this largemouth. 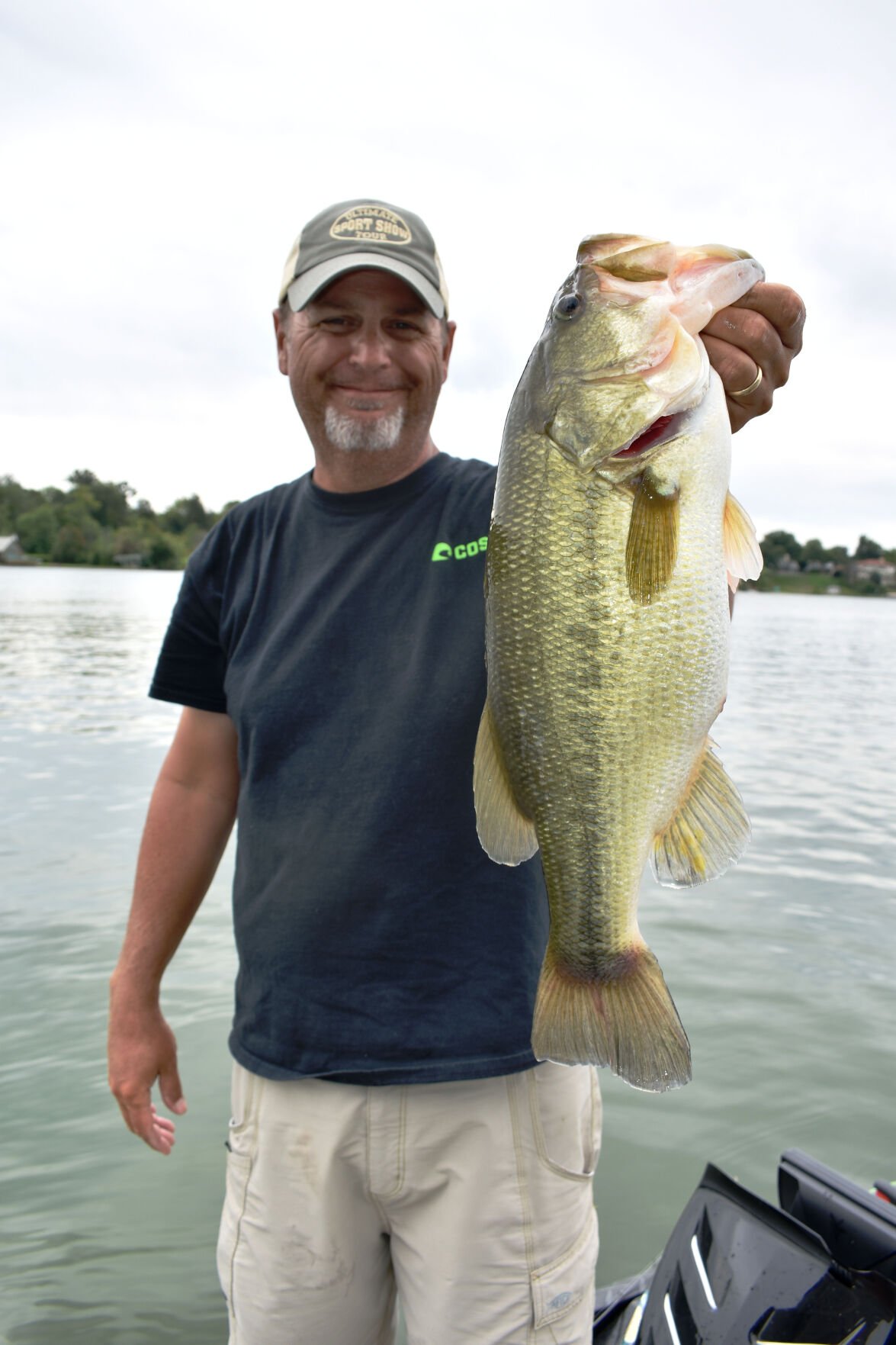 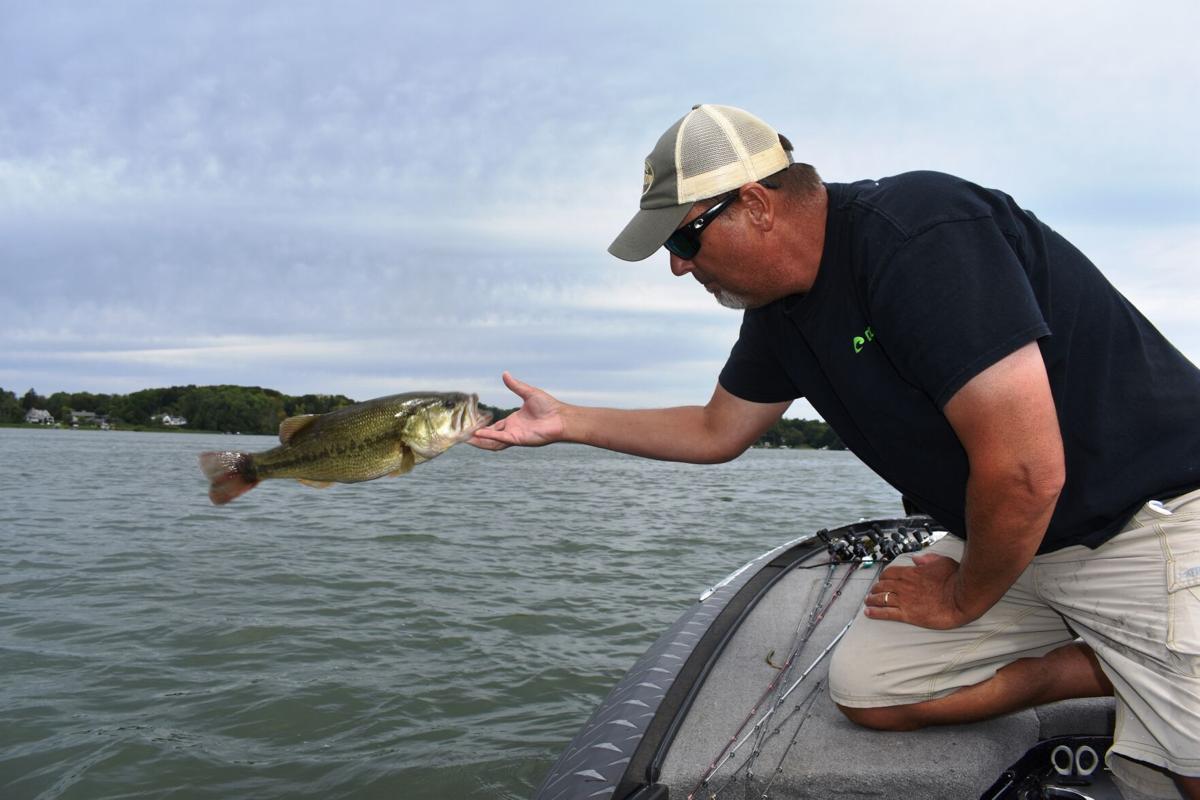 A plastic worm rigged Texas-style on a drop shot rig fooled this largemouth.

EAST GRAND RAPIDS — The first hour was s-l-o-w. I fished a jig, Ben Nielsen fished a deep-diving crankbait and an umbrella rig as we worked along the edges of a submerged island on Reeds Lake.

Finally, I felt a bite, set the hook and immediately broke my line.

I thought so too, but about 30 seconds later I heard a big splash and Nielson said: “Did you see that? It was a largemouth. A big one, at least five pounds.”

Sigh. I can’t explain it; I felt certain I had tied a good knot. What’s the saying? Stuff happens?

Nielsen said he wasn’t concerned about the slow start.

“The slow start is pretty typical,” he said. “They don’t typically set up on those off-shore structures until later in the day. That’s a beautiful thing — it means you can sleep in a little bit.”

Nielsen switched gears, going from the motion baits to a slower presentation — a drop shot rig with a plastic worm and a Carolina rig with the same worm. And he started getting bit. I stayed with the jig and didn’t get again bit until I went to a drop-shot rig, too.

Nielsen said he wanted to fish Reeds Lake because it “fishes a lot like a Southern reservoir.

“A lot of Michigan lakes don’t have that,” Nielsen said. “They have good weeds and maybe a point, maybe an island or two, but they don’t have those off-shore features.”

As Nielsen explained it, “they raised the level of Reeds Lake — I think it was in the ‘20s or ‘30s — and before that they had an island with an amusement park on it and they had pipelines that that ran out to the island for water and sewer. So they created like a road bed under water. That road bed to the island — that’s why you have some of those features.”

What became apparent to us was the fish wanted it low and slow, but not on the bottom.

“Some days they’re going to want it dragged right on bottom,” Nielsen said. “Other days, when they’re in a more negative mood, they want it right at danged-near eye level — near bottom but not on bottom.”

The drop-shot rig was our best bait. We were fishing with 6-inch worms with a 3/0 straight shank hook.

The bigger worm — a lot of guys fish drop-shots with small grubs or swim bait bodies, “works better than the smaller baits and it does catch bigger fish, too,” Nielsen said. “It’s rigged weed-less, so you can fish it in weeds, rocks and wood — it goes through cover real well.”

We fished about six hours and caught about 25 fish, most of them solid keepers. Nielsen caught one that would scare the heck out of 5 pounds. Nielsen said Reeds Lake always produces good bass.

“In evening tournaments, three-hour tournaments, it often takes 20 pounds (for five fish) to win,” he said. “It has lots of bait — minnows, bluegills, golden shiners.”

But the main reason Reeds Lake produces so well is the launch ramp is a total pain in the neck. There is no parking lot. It takes a bit of finesse to launch, and then you have to park on the four-lane street that adjoins the lake.

“That puts a lot of people out,” Nielsen said. “That keeps a lot of fishermen off the lake.”

Nielsen said he was a bit disappointed that we couldn’t get the fish to go on the more aggressive baits, but it’s hard to complain about a 25-fish day.

“They weren’t going to eat it that day,” he said. “A finesse presentation just a little off the bottom was the deal that day. The key is versatility — you have to do what the fish want you to do. You have to figure out what they’re going to bite that day.”

Nielsen, 47, is a lifelong bass fisherman who has worked in the outdoor industry — he worked at sporting goods stores for many years before he became a show runner for Showspan (The Ultimate Fishing Show, Outdoorama, etc.)

Nielsen said he had to learn bass fishing on his own as his grandfather, who got him started always fished the same way — splatting.

If you’re unfamiliar, it’s an old technique that involves using a long cane pole with heavy line and a pork frog on a hook. The fisherman uses something like a roll cast with a fly rod to present the bait and “splats” it on the surface, raising the pole to drag the bait atop weed beds, lily pads, whatever.

“I wasn’t allowed to fish when we first started,” Nielsen said. “I had to learn how to row the boat first.”

He did. And now he knows a bunch of ways to catch bass and with modern trolling motor, there’s no need to row. But that’s not all that has changed.

“Every one we caught went on a stringer and we ate them all,” he said.