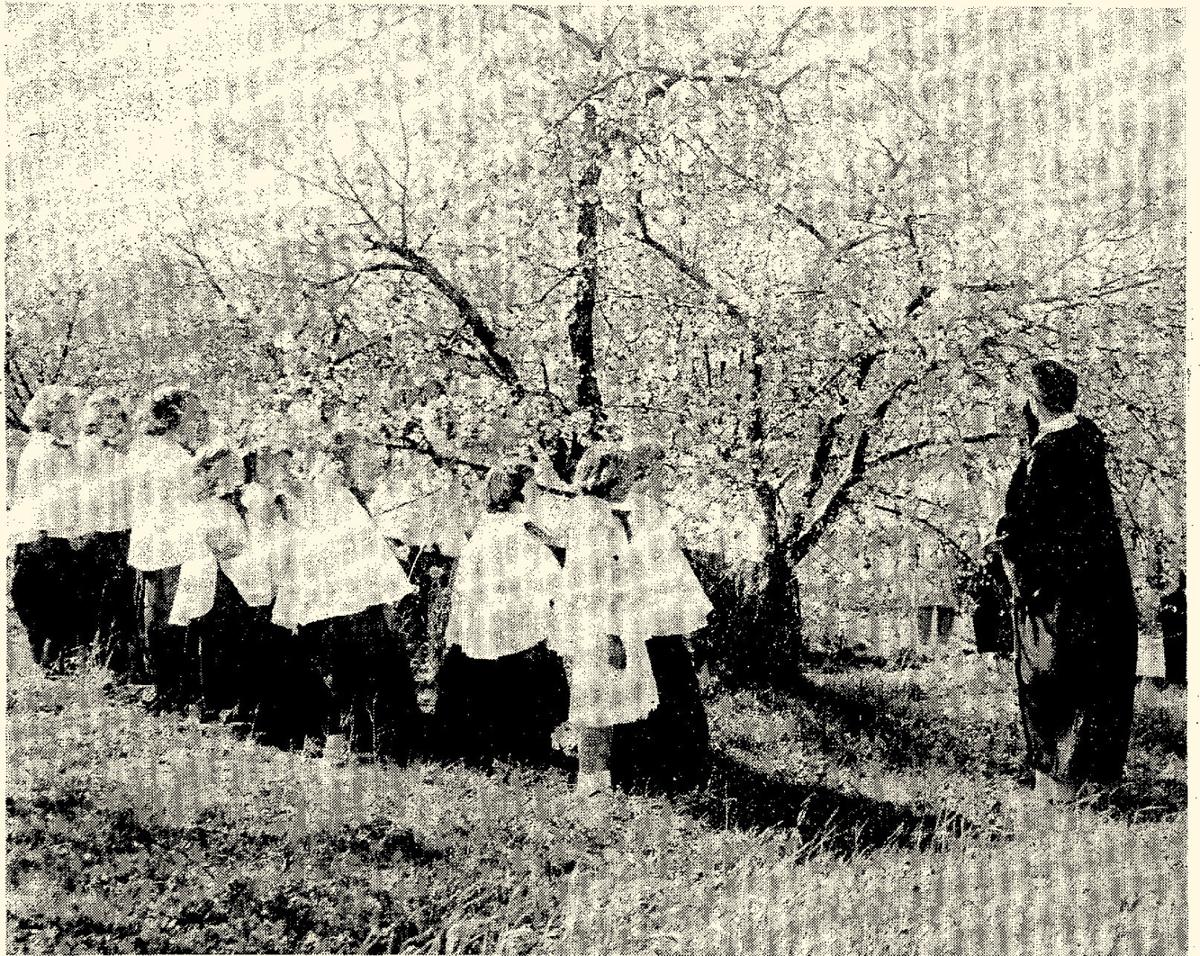 A photo from the 1958 Blessing of the Blossom republished in the July 7, 1976 edition of the Record-Eagle. 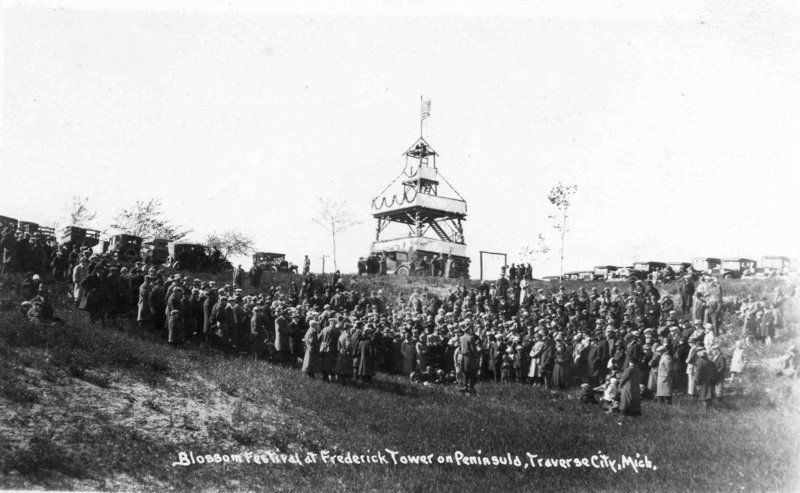 The tower photo is of the Blessing of the Blossoms Friedrich Tower, which sat west of Center Road near Nelson Road on Old Mission Peninsula. Probably the 1925 event. Playing on the weather angle, you can see the flag flapping in the strong wind and notice the winter coats on those attending. 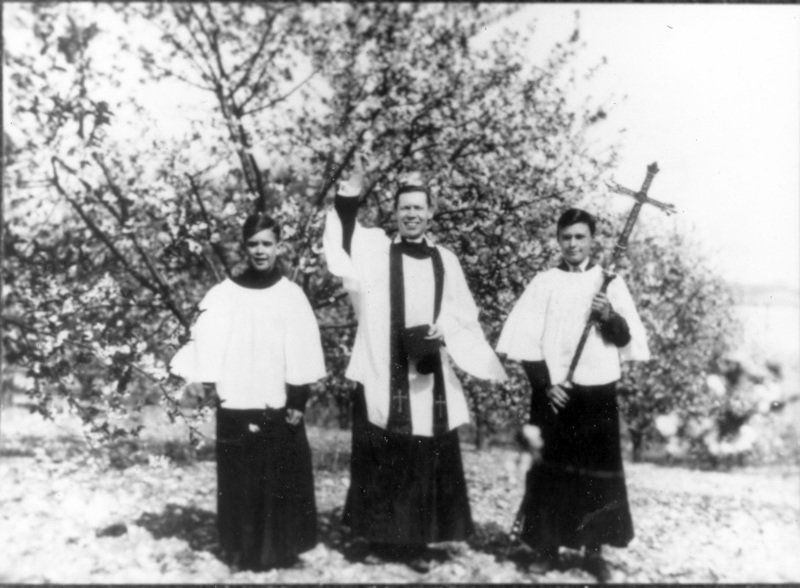 A priest at a later, mid-20th century Blessing of the Blossoms.

A photo from the 1958 Blessing of the Blossom republished in the July 7, 1976 edition of the Record-Eagle.

The tower photo is of the Blessing of the Blossoms Friedrich Tower, which sat west of Center Road near Nelson Road on Old Mission Peninsula. Probably the 1925 event. Playing on the weather angle, you can see the flag flapping in the strong wind and notice the winter coats on those attending.

A priest at a later, mid-20th century Blessing of the Blossoms.

TRAVERSE CITY — Nearly a century-old, time-honored tradition will return in-person ahead of the 2021 National Cherry Festival.

The annual Blessing of the Blossoms, a mainstay on the Old Mission Peninsula since the mid 1920s, will be done both in-person and virtual the Sunday after Mother’s Day.

Last year’s event included each of the four Old Mission Peninsula pastors — Dr. Gary Hogue, Pastor Zelphia Mobley, Pastor Peter Shumar and Rev. Ben Rexroat. Afterward Rexroat went to each of the 14 orchards and wineries on the peninsula and asked for the blessing of their crops.

But organizers agree there’s something special about holding the blessing in person again. That’s especially because it’s larger counterpart, National Cherry Festival, plans to make its return this summer as well.

“A farmer’s allowed to grow seeds, they talk about that back in the Old Testament,” said Bob Begin, founder of the Chateau Chantal. “Some of it grows out into the rocks and doesn’t do anything, some of it goes on poor ground for seeds or sand. Some of it grows on good grounds and blossoms, and become something which survives as we survive.”

Dating back to the 1910s cherry farmers on the peninsula would hold an informal blessing of the blossoms ceremony at blossom time in May. Local cherry growers got together and asked their priest to bless their crop.

But by mid-1925 the cherry industry became even more vital to the area’s economy. The farmers began to see an economic opportunity to draw people in from around northern Michigan to witness the cherry blossoms bloom.

The first Blessing of the Blossoms ceremony was held at Friedrich Tower near Center and Nelson roads. That was the crux of the first official festival on Sunday, May 24, 1925 — the event later known as the National Cherry Festival.

Record-Eagle articles from the day after, May 25 (reprinted in a July 7, 1976 supplement to the paper commemorating the 50th anniversary of the National Cherry Festival) called the blessing “the most impressive religious ceremony ever held in the Grand Traverse region.”

The Blessing of the Blossoms Festival returned the summer of 1926, as did the ceremony at Golden Tower (off Eiman Rd. between Peninsula Drive and Center Road). Historical photos show lines of cars and American flag bunting dangling from the tower.

“It was a fine day and thee cherry orchards were in full bloom — people said they’d never seen the blossoms so abundant and beautiful,” read an excerpt from National Cherry Festival: A Pictorial History.”

Described by a May 28, 1926 Record-Eagle article: “(Golden Tower) presented a pretty appearance with its background of orchard bloom. From its platforms could be seen thousands upon thousands of cherry trees in heavy bloom.”

“What can more charming to the eye or more provocative to the appetite? Had the forbidden fruit been the cherry, I think Eve herself should be forgiven of her transgression,” said H. D. Hootman of the Michigan State College, chief speaker of the event, according to the Record-Eagle.

No festival was held in 1927 because late frost damaged the cherry crop, but two major changes were made that stayed to date.

George McManus Jr., 90, the former state senator from Traverse City, said he grew up on the peninsula near Friedrich tower before it was torn down in the ‘50s.

During his time he said the blessing was moved to Bowers Harbor, but it still became an annual event.

“It was a blessing of the blossoms, not the fruit, but the blossom,” McManus said. He said he recalled between 75 and 100 people attending.

Now the peninsula isn’t as full of cherry orchards as it once was.

Vineyards stretch along M-37, which runs right through the famed 45th parallel.

In 1967 the event was moved to the July Cherry Festival, renamed ‘Blessing of the Cherries.” For years it wasn’t held in May, then Chateau Chantal resurrected the prayer-oriented Blessing of the Blossoms as its own event in the mid-1990s.

It has been held annually since.

Following the service there will be a free cherry pie reception with Bishop Walter Hurley at Chateau Chantal, 15900 Rue de Vin.