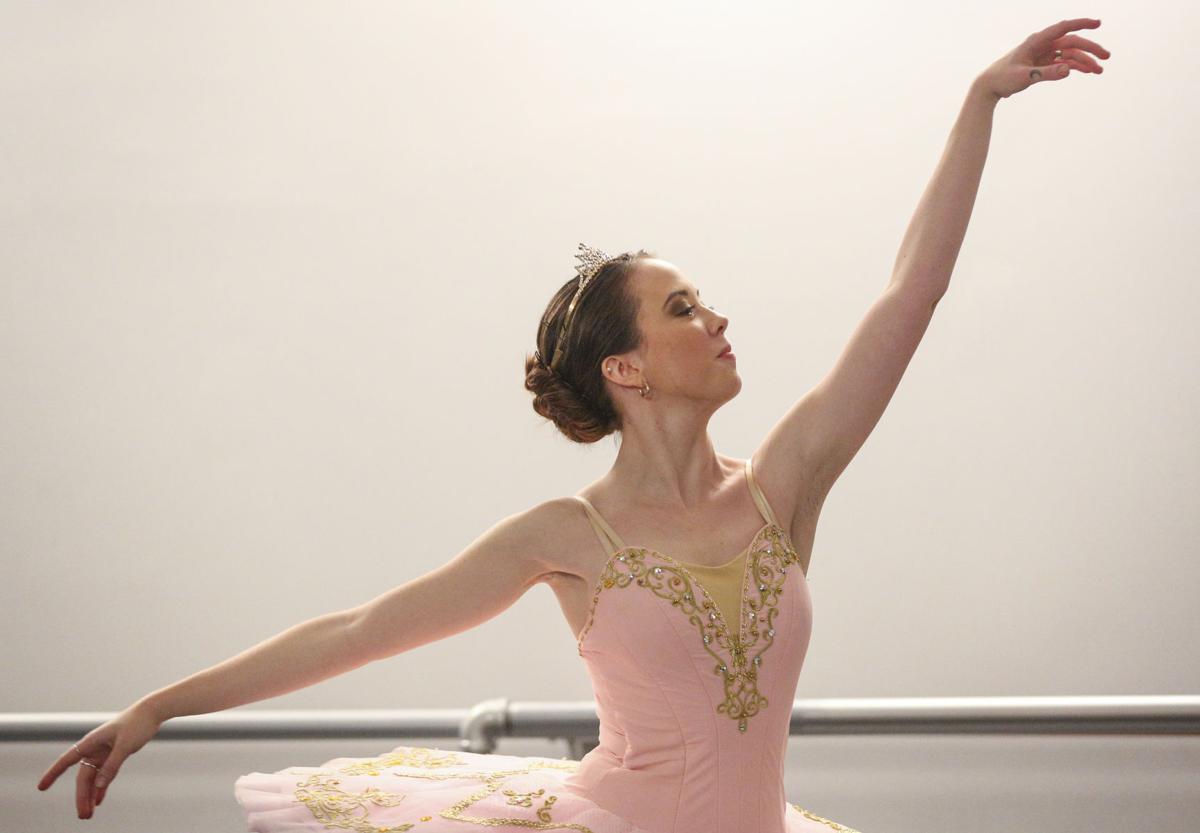 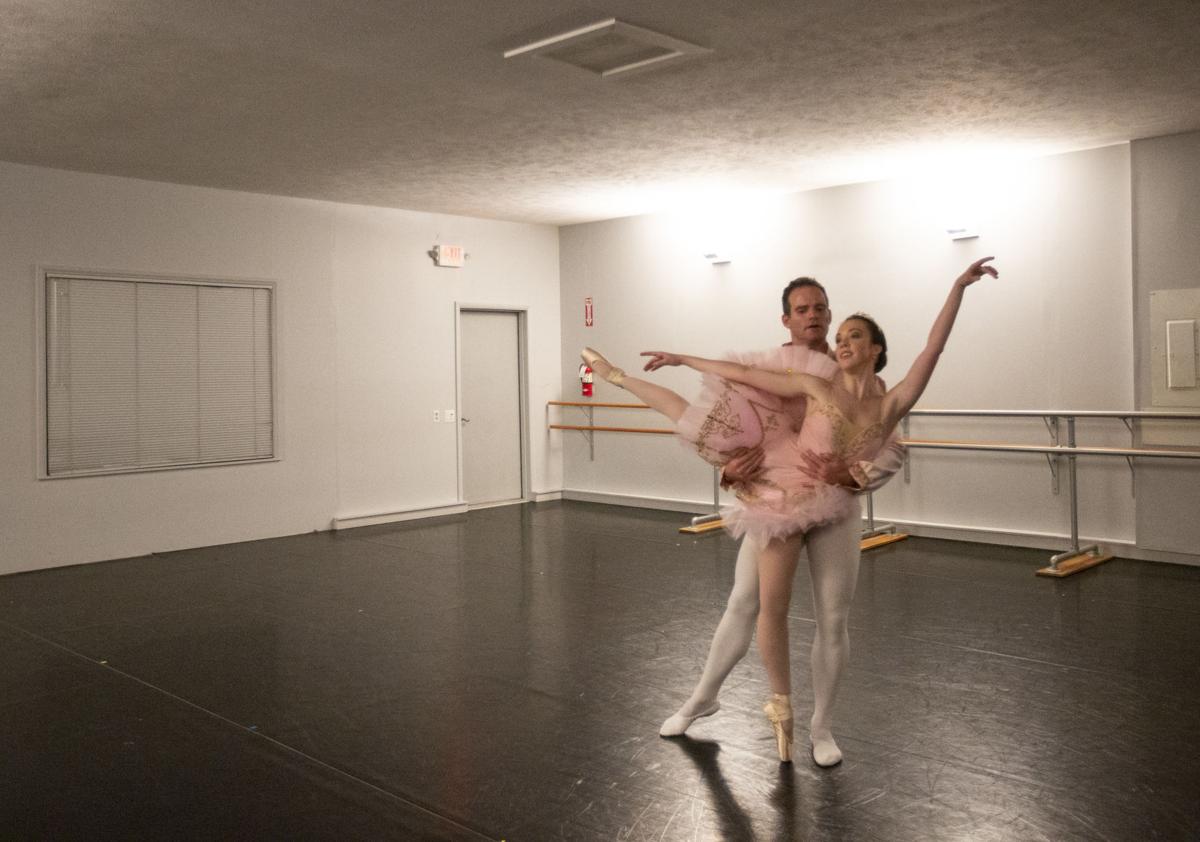 Justin Koertgen and Angelica South rehearse their pas de deux for the Northwest Michigan Ballet Theatre's presentation of "The Nutcracker" being held this weekend at the Milliken Auditorium. 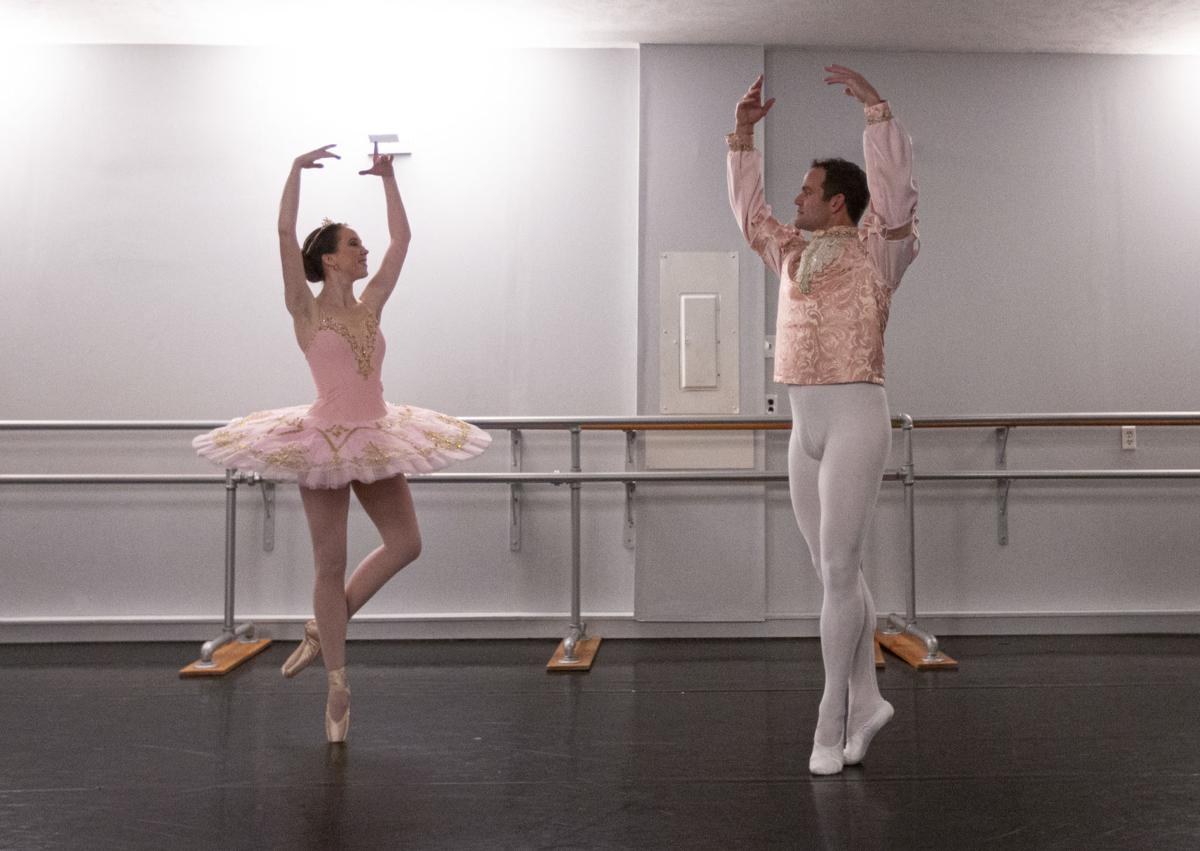 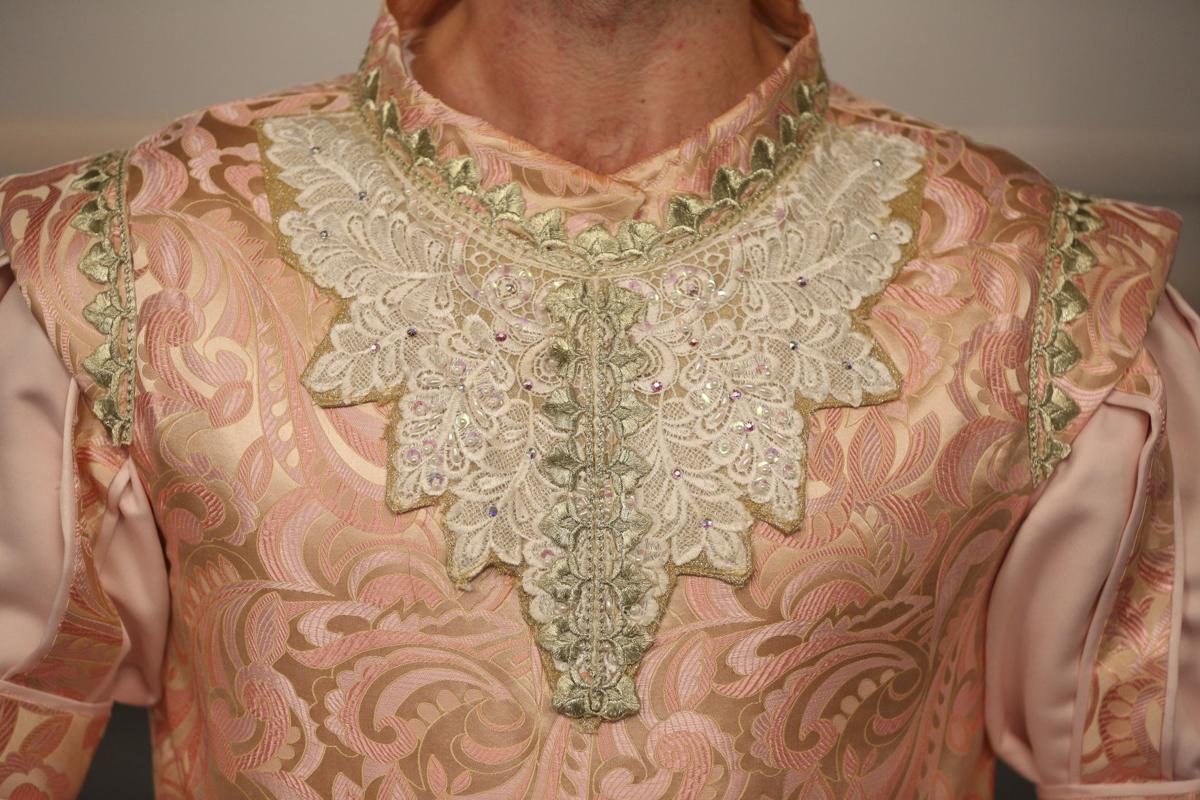 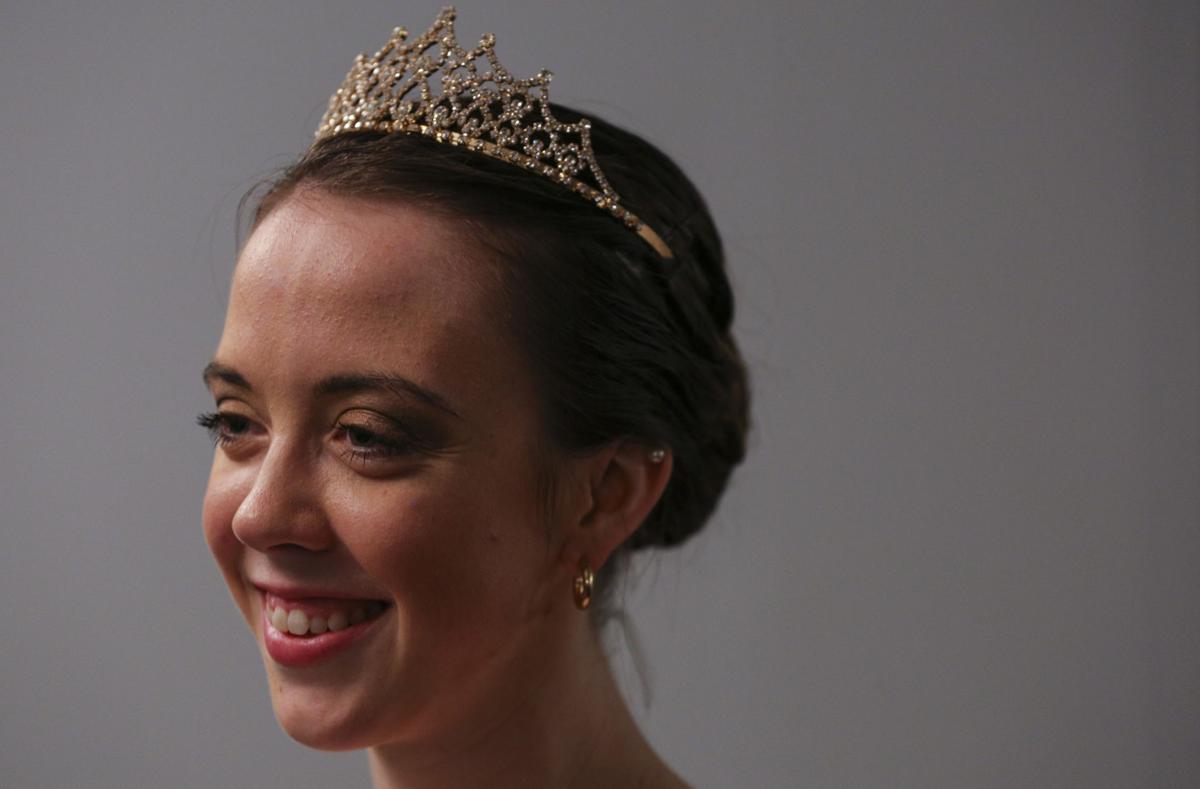 Angelica South poses for a portrait at Northwest Michigan Ballet Theatre in Traverse City on Tuesday. South will dance the role of the Sugar Plum Fairy in the ballet company’s production of “The Nutcracker.”

Justin Koertgen and Angelica South rehearse their pas de deux for the Northwest Michigan Ballet Theatre's presentation of "The Nutcracker" being held this weekend at the Milliken Auditorium.

Angelica South poses for a portrait at Northwest Michigan Ballet Theatre in Traverse City on Tuesday. South will dance the role of the Sugar Plum Fairy in the ballet company’s production of “The Nutcracker.”

TRAVERSE CITY — As a child, Angelica South could not sit still. So her mom signed her up for dance classes, starting with tap and jazz at the age of 4.

At 9 she found her passion — ballet — and she’s been en pointe ever since.

This weekend, she is reuniting with the Traverse City dance instructor who brought that passion to life, Thomas Morrell, owner of the Ballet Inc. school and its resident youth ballet company, the Northwest Michigan Ballet Company.

South will dance the role of the Sugar Plum Fairy in “The Nutcracker,” which has become an annual tradition for the ballet company. This is her sixth time dancing the coveted role, but the first time in her home town.

“It’s an honor to be back,” South said. “It’s really been a full-circle kind of event in my life.”

Performances are at 2 p.m. and 7 p.m. Saturday and 2 p.m. Sunday at the Milliken Auditorium. Another performance will be held at 7:30 p.m. Dec. 7 at the Northport Community Arts Center, with Kaitlyn Yaple of Traverse City dancing the role of the Sugar Plum Fairy.

A cast of 50 youth dancers ranging in age from 9 to 18 will fill the stage. Some of their parents, who may or may not have any dance experience, are filling in as the “party parents” in the first act of the classical Tchaikovsky ballet.

They’ve been learning how to waltz and gallop, as everybody dances in “The Nutcracker,” Morrell said.

The role of Sugar Plum is one that most young dancers aspire to, he said.

“I never wanted to be Clara,” South said.

South arrived in Traverse City on Tuesday and spent the rest of the week in a whirl of rehearsals. As a dancer, teacher and choreographer, she is used to 12-hour days.

After graduating as a home-schooler, South took a position with the Lexington Ballet Company in Kentucky, where she danced for six seasons.

She joined as a soloist, a rare feat, as many new members start out in the corps, Morrell said.

Several years ago South founded her own small youth ballet school and company, the United Fine Arts Academy, in Georgetown, Ky., where she teaches and choreographs her own productions.

She has studied at the Grand Rapids Ballet, The HARID Conservatory in Florida, the American Ballet Theatre in New York City and the Bolshoi Ballet, also in New York City.

Of the roles she has danced so far, Sugar Plum is her favorite. But her dream role is Giselle, the young peasant girl who dies of a broken heart.

“My favorite part of dance is the acting and that ballet has a lot of theatrical aspects,” South said.

She also loves the idea that a performance has added something to an audience member’s life.

“It’s really nice to see how the audience can relate to dance and ballet even if they have no prior knowledge,” she said. “There’s always something they can take away.”

The role of the Cavalier is danced by Justin Koertgen, who joined the staff of Ballet Inc. — where he had also been a student — about a year ago. Koertgen danced with the Dayton Ballet Co. in Ohio for 12 seasons before returning to Traverse City to take a position at Interlochen, where he taught dance for several years.

Koertgen first danced the role at the age of 15 when he was a student at Interlochen. Since then he has danced it several times.

When Koertgen and Morrell put their heads together to fill the role of this year’s Sugar Plum Fairy, South came to mind, he said.

It is the first time Koertgen has been paired with South and it’s something he has looked forward to.

“She’s talented and I know how good she is,” Koertgen said.

A male dancer’s job is to make the female dancer look better, he said.

“She makes it easy to do,” Koertgen said. “I knew she would make the show look wonderful and it would make my job easier.”

South is such a good dancer that he won’t have to “save” her from going off balance, Koertgen said.

South never thought she would return to dance as a guest with the company she belonged to for so many years.

Morrell danced professionally for about eight years in the Detroit area, Flint and Memphis. But then he was “pushing 40” and it was taking a toll on him, he said.

“Just when you start to reach your peak your body starts to fail you,” he said.

He founded the ballet school in 1996 and the company a year later.

“To see my kids go on to professional careers ... that’s what it’s all about,” Morrell said.

Costumes for “The Nutcracker” were created by designer Donna Hood and sets were designed and constructed by Amber Harker, John Rohl, Morrell and an “army of parent volunteers,” Morell said.

Who: The Northwest Michigan Ballet Theatre